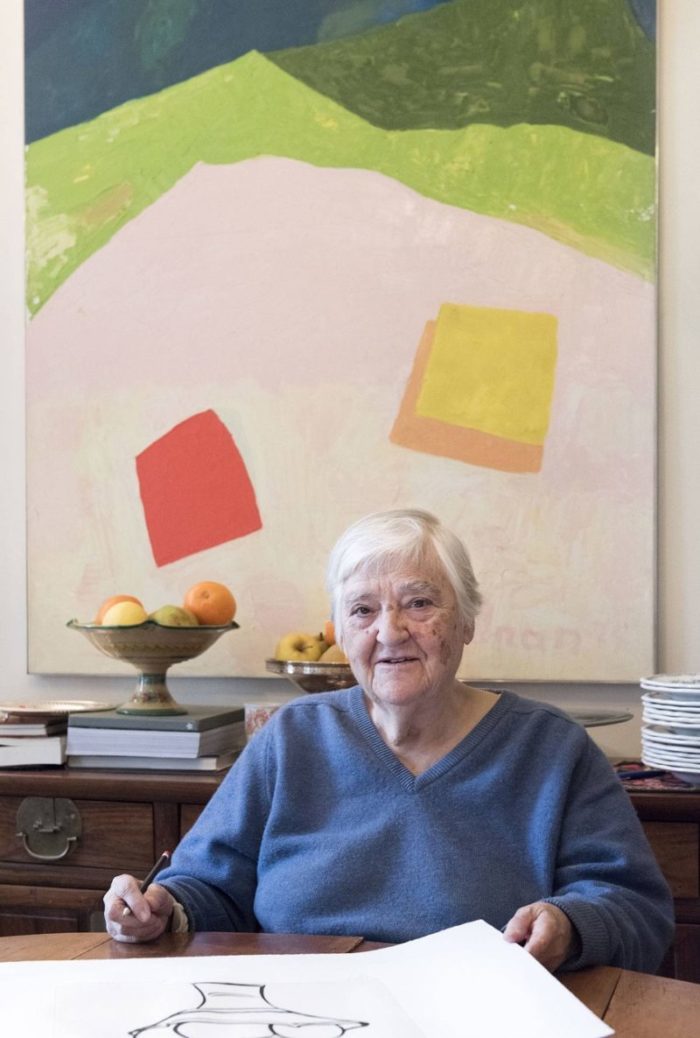 Beyond any doubt, the recent passing of Etel Adnan (1925-2021) transformed the sense of her exhibition Light’s New Measure at the Guggenheim. What started as an exhibition of a living artist is now the retrospective of a historic figure, locating the show between two different times: the historical and the contemporary. However, the shift in meaning of the exhibition due to the interruption of death is not the only reason that Light’s New Measure is special. The curators Katherine Brinson and Lauren Hinkson not only brilliantly establish a relation to the exhibition Vasily Kandinsky: Around the Circle (which opened simultaneously on October 8), but also emphasize Etel Adnan’s admiration for the Guggenheim building’s designer, Frank Lloyd Wright.

A wall text in the exhibition reveals that Adnan, who originally aspired to become an architect, was fascinated with the influence of Mesopotamian forms on Wright’s architectural practice. The Guggenheim, which she imagined as a contemporary version of Babel Tower, provides the unique opportunity for viewers to contemplate Adnan’s works in Wright’s spiraling rotunda. Starting with Kandinsky’s works installed in the upper levels and descending into Adnan’s exhibition helps in observing her indebtedness to the former. Indeed, Adnan saw Kandinsky’s paintings on view at the Guggenheim during a visit to New York City in 1963. Referring to this influential moment from Adnan’s personal history, a wall text in Vasily Kandinsky: Around the Circle cites a paragraph from an exhibition review she wrote the same year for the magazine Jeune Afrique: “It is often said that Kandinsky’s final period lacks poetry, that it’s rigid because it comprises defined forms, circles and triangles. It is disdainfully labeled ‘geometric.’ But that’s tantamount to saying that the sky has no grandeur, that circles are not awe-inspiring symbols.” These lines provide insight into Adnan’s formal language that is based predominantly on geometrical abstraction and her interest in the geometry of nature, all of which her semi-abstract landscape paintings, especially the Mount Tamalpais series, exemplify. In fact, a significant portion of the exhibition is devoted to Adnan’s decades-long engagement with Mount Tamalpais, which came to embody an existential meaning for her when she lived in Sausalito, California. Adnan’s many interviews and her 1986 book Journey to Mount Tamalpais suggest that the mountain (or her “best friend,” as she called it) became a metaphysical center in her life which lacked a geographical center due to displacement and exile.

In addition to paintings and watercolors of Mount Tamalpais, Light’s New Measure includes Adnan’s abstract pastels from the 1970s, untitled geometrical abstract oils made between the 1960s and the 2010s, paintings of celestial bodies including the series titled Le poids du monde (2016), as well as tapestries, films, and leporellos. Presenting examples from various media that the artist used, the exhibition does justice to the polymath character of Adnan: she is portrayed as a visual artist as well as a poet, novelist, and journalist. It also includes a video titled I See Infinite Distance Between Any Point and Another (2012) by the London-based artist collective The Otolith Group, which features Adnan reading one of her poems in her Paris apartment. Indeed, it is the poem “Sea and Fog” where the title of the exhibition Light’s New Measure comes from. Installed on the top level of the museum, this piece concludes the exhibition with the soothing voice of Adnan.

Near I See Infinite Distance… is Adnan’s ninety-two-minute film Motion, which has been transferred from a Super 8 film she shot during her travels in 1980s and later reassembled into a montage. The film predominantly features an urban setting shot from the window of the apartment where Adnan would stay during her visits to New York City. Her interest in the interaction between light and the natural world which she also explores in her landscape paintings is seen here in her representation of built environment. To reach these video installations, viewers must pass through the Kandinsky floors, which suggests a relationship between the artists and their respective exhibitions.

Light’s New Measure continues into a reading room where most of Adnan’s books are available, providing an opportunity to explore her writing. According to the artist, her writing practice is not separate from her visual art. The intertwining of poetry and painting is especially clear in Adnan’s leporellos, a medium which enabled her to bring together writing and visual art as she explains in the 1998 essay “The Unfolding of an Artist’s Book.” Adnan started to work on these accordion-fold notebooks in the early 1960s by copying the poems of Arab poets she liked and combined them with her visual art. In later iterations of the leporellos, she also transcribed texts in French and English in addition to creating purely visual versions. In her essay, she emphasizes that the drawings that are fused with the writing in the leporellos are not illustrations but rather are immediate intellectual and emotional responses to the texts. She describes the transcription of a text as a kind of translation that transports it from one language to another—a visual one. The hybrid format of a leporello thus seems to express for her the authorship of the reader as well as the relationality of handwriting. Light’s New Measure’s reading room elegantly allows visitors to explore the relationality of writing in Adnan’s practice by asking them to copy some lines from her texts and embellish them with drawings using cards and colored crayons provided in the space.

Light’s New Measure closes with the heartbreaking knowledge that there will not be any new work by Etel Adnan, an artist who developed her art practice until the very end of her life that spanned almost a century. The horizon suggested by the simplicity and precision of a line in her abstract paintings now refers us to her absence.

“Morning. Vast. Imprecision. Fog has covered everything in gray
absolute. This has lasted. Doubt looms over the mind. Absence
is harder to accept than death.”