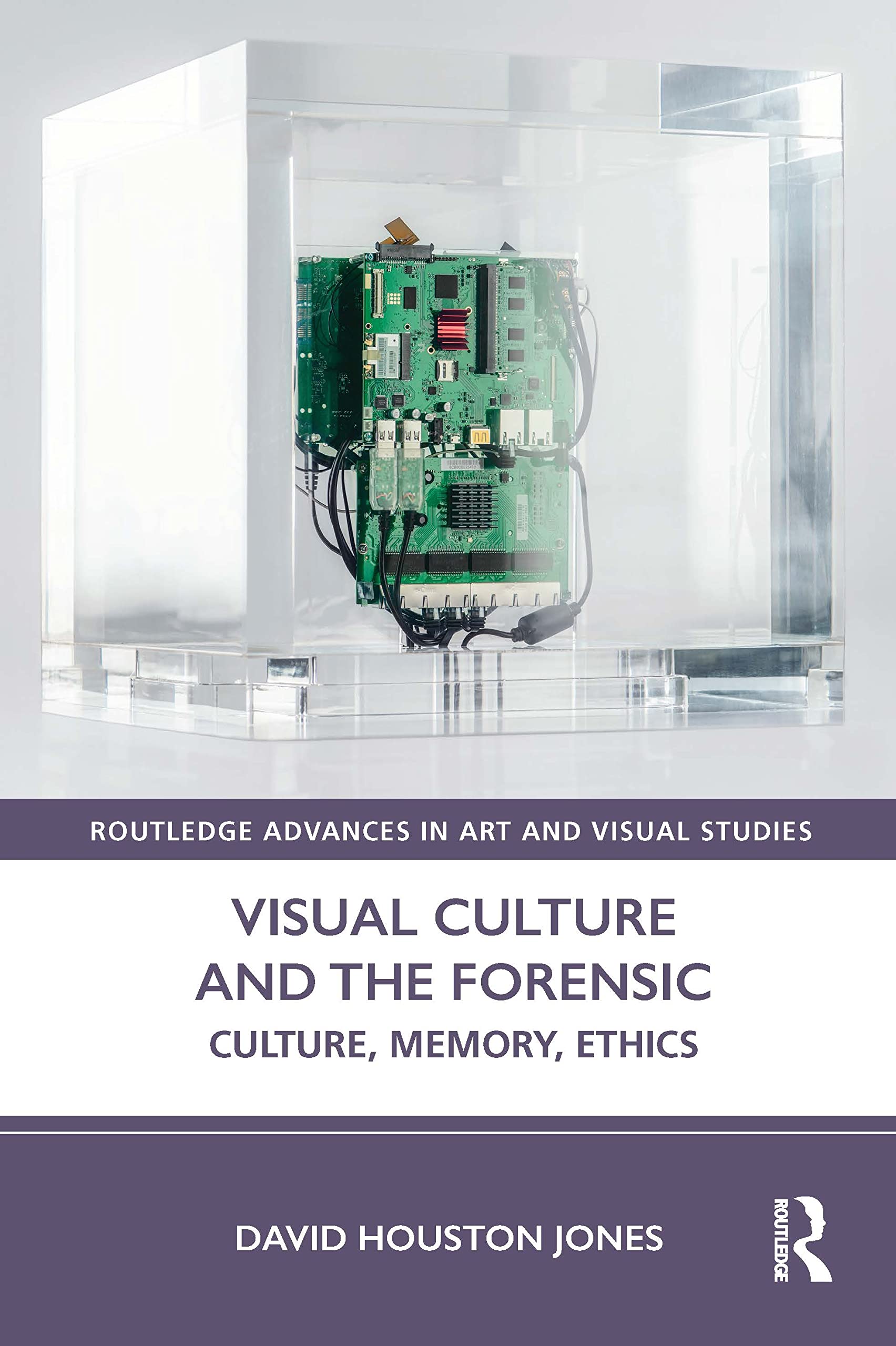 Questions of evidence and ethics in photography have been taken up by many theorists, as photography’s role as truth-preserving or ideological imposition has been a point of contention since its inception. We ask, do photographs have a special tie to reality because of the mechanical ways they are made? Can they reveal any kind of truth? Do they perform any kind of political work?

Building upon Walter Benjamin, Allan Sekula, and Jacques Rancière, and responding to Eyal Weizman’s call to explore the rhetorical constructions of the forensic, David Houston Jones’ book Visual Culture and the Forensic: Culture, Memory, Ethics joins the conversation by investigating the entanglement of contemporary artistic practice with visual traditions and discursive constellations of forensic photography. This “forensic aesthetic” in art, Jones argues, opens up interrogations of who is speaking, to whom, and on what epistemological and ethical grounds (Jones, 3). Jones engages in critical dialogues of forensic conduct and photographic aesthetics – how forensic conventions mobilize art and how art reconfigures the domain of the forensic. Identifying new forensic epistemologies of the “object-oriented culture,” Jones explores how “human voice persists, albeit from an indeterminate position” in this culture (Jones, 6).

Visual Culture and the Forensic is organized by topic, and each chapter deals with an element in the forensic aesthetic that Jones subsequently takes apart and reassembles with new insights. In chapter one, Jones discusses the epistemological productivity and ethical critique embedded in the works on the body by artists like Melanie Pullen, Kaoru Izima, and Angela Strassheim. Jones argues that these artists converge in their transgressive engagement with crime scene photography’s voyeurism and objectification of women. Specifically, Pullen’s High Fashion Crime Scenes is remarkably against narrative: the objects and bodies constitute a sense of confusion that prevents any reconstruction of “what happened” (Jones, 23). This is significant because now the crime and the women’s bodies become marginalized and blended in a repertoire of objects situated in a landscape, no longer the center of fetishistic objectification. Similarly, Strassheim’s Evidence uses light effects from forensic photography to disorientate the viewer’s gaze: as light and blood residue are both signified by white, it is hard for viewers to separate traces of blood from light effects. In a Benjaminian sense,  Evidence complicates the photograph’s evidential function, inviting viewers to critically reflect on the photographic indexicality to the real.1

Departing from the intelligible body, Chapter Two, “Forensic Landscapes,”  focuses on works that consider the differently scaled landscape of war and the interplay between aesthetic and forensic viewing. Jones uses the works of aftermath photographers Sophie Ristelhueber, Luc Delahaye, and Simon Norfolk to show the substantial ethical significance in the manipulation of viewpoint and dimensions. Meanwhile, recognizing and undermining the epistemological authority of the dominant perspective is an important strategy of these artists. Ristelhueber’s Fait embodies a forensic orientation – manipulating viewing attention and inviting the gaze to search for clues. Using a ground-level angle to take close-ups of discarded objects, she uses this forensic tradition “as part of the ‘discreet affect’ which arises from her work’s subtle undermining of visual expectations” (Jones, 50). Trevor Paglen’s long-range photography of military sites, satellites, and drones also embodies a highly disorienting use of scale. In addition to rendering visible power and surveillance, Paglen’s work borders on abstraction, thus shifting from depicting the real to the aesthetic contemplation of the sublime. Paglen’s work is particularly transgressive as its appeal to the sublime positions the work “in relation to an aesthetic which is itself in tension with reason, and therefore with evidence” (Jones, 68).

Chapter Three continues the discussion of the sublime within information forensics, moving a step further from the human subject. Jones contextualizes the ephemerality and fungibility of electronic inscriptions of data through several data-related artworks, concluding that data reveals the limits of and affords us a new epistemology of materiality. Artists like Paglen, Norfolk, and Gerrard create deadpan photographs and simulations in a monumental scale, visualizing the hidden architectural form of the Internet infrastructure and secret apparatus of power. These deadpan concrete installations, according to Jones, resist a sublime vision of dematerialization and engage with a “counter-forensic practice” for their “persistence of a ‘human’ viewpoint” (Jones, 73). Although Gerrard creates simulation with objective visualization and non-human perspectives, his work presents the possibility of a return to the human: the “telepresent, omniscient, yet strangely disconnected” (Jones, 84) viewing experience echoes the human viewpoint in the increasingly forensic culture filled with machine-readable images and omnipresent simulacra.

Chapter Four “The Language of Things” discusses further consequences of the object-oriented culture, in which the language of objects overshadows that of humans. The artworks Jones presents in this chapter depart from simply positioning objects prominently by human experts like in judiciary contexts, rather, they shed light on non-human agency that can reconfigure our understanding of the forensic: objects are no longer props, but speaking agents. Charrière’s Polygon exemplifies this radical form of non-human representational regimes: the imprint of radioactive dust on the film bypasses the photographer’s activity and leaves a material impression without any representational connection to the scene depicted. However, Jones insists the evidential still connects with the representational: Charrière’s photographs are conditioned by human actions and epistemologies, underwritten with a mode of reference that is guided by aesthetic concerns. His work thus exists in the space between “human attempts to visualize and codify and, on the other hand, the alien separateness of things” (Jones, 124), reiterating the entanglement between the forensic and the aesthetic.

In the final chapter, Jones zooms back in on the human face, confronting the problem of machine readability and artistic and forensic modes of viewing in light of facial recognition systems. The works of Paglen, Broomberg and Chanarin, Zach Blas and Leo Selvaggio are critical understandings of and responses to the operational logic of biometric conceptions of the face. The interplay between forensic procedures and visual rhetoric emerges once again as these works provide viewers with access to the largely invisible world of the machine-readable image and, the “continuing implications of human gaze in machine vision” written in deeply at a structural level (Jones, 148). Jones ends the book with a plea for his readers to remain vigilant in the post-COVID era, “combining ethical looking with a renewed forensic imperative” (Jones, 156).

Indeed, a plea of a critical archivalism threads through this masterful book. Jones brilliantly shows that forensic procedure and aesthetic rhetoric are inherently inseparable. His aptly selected artworks engage with this entanglement and produce new epistemologies that deconstruct reified binary and reveal new possibilities in manifold ways. The selection is indeed diverse in its form and content; however, most of the artists represented in the book are from the West, and work within the West. The question of whether/how such entanglements would remain applicable in a larger context of non-Western art arises. Further, his gendered analysis that certain forensic aesthetic practices free women from being the center of objectification begs the consideration of a racial analysis – how are people of color positioned in forensic photography? And how do artists transgress existing racial epistemology?

Nevertheless, Visual Culture and the Forensic is an important addition to the discussion of ethics and truth in visual culture and our contemporary society. Jones’ discussion of this entanglement reminds one of projects of undoing of rationality and affect, on which other philosophers have written.2 In the same way, Jones questions and undoes the supposed distinction between reason and passion, forensic and aesthetic, scientific and artistic and provides us with exciting epistemological productivity. His interrogation of science and technology, the human subject, and art remains vitally important when navigating our current time of machine surveillance, biometric data collecting, and global pandemic. In this sense, Jones’ work is a valuable resource for academics working in visual culture, contemporary art, media studies, science and technology, and archival studies.