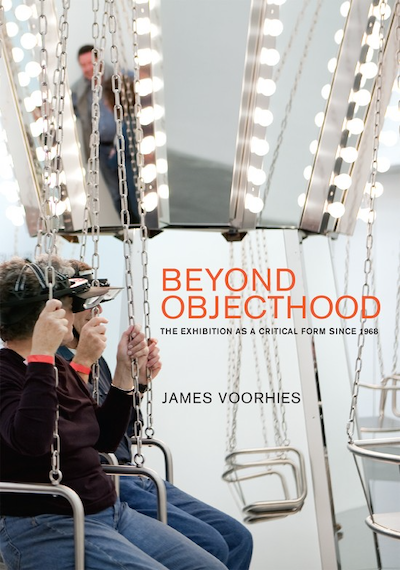 James Voorhies, Beyond Objecthood: The Exhibition as a Critical Form Since 1968. Cambridge: The MIT Press, 2017. 288 pages.

In James Voorhies’ first monograph, Beyond Objecthood: The Exhibition as a Critical Form Since 1968, the curator and art historian of modern and contemporary art examines the critical potential of the exhibition from the second half of the twentieth century to the beginning of the twenty-first century. Voorhies focuses on artworks and exhibitions that capture a spectator’s attention and involve them without explicitly inviting them to participate, their critique manifesting itself through an extensive apprehension and implication of the spectator. Carsten Höller’s exhibition Experience (2011-12, New Museum), which includes his work Untitled (Slide), a stainless steel slide that carries the spectator through two levels of the museum, marks the starting point of Voorhies’ study.

Through its potential to confuse, surprise, and engage the spectator via multiple senses as well as through its unique temporal and spatial aspects, the slide, according to Voorhies, figures as a fruitful approach in engaging with and expanding on notions of art, its practices, and contexts. In contrast to exhibitions or artworks that explicitly communicate political content, it is the form of the artwork which is central to its critical efficacy. Voorhies demonstrates that it is the durational engagement of the spectator, the museum setting, the confusion and strangeness the spectator experiences, and the lack of explicit instructions that all feed into this ‘criticality’ which in turn generates dissensus—“the crux of art’s critical capacity” (16).

However, Voorhies also illustrates how Höller’s slide encapsulates the challenge critical art faces in a capitalist world that quickly absorbs critique and transforms it into profit. The slide turns out to be a double-edged sword: apart from its potential to disrupt and confuse, and thereby to stage a critical intervention, it also feeds into the contemporary museum’s turn towards increasingly spectacular forms of experiences for entertainment and profit. Moreover, the slide’s criticality ultimately depends on the museum’s context—its spatial capacity and associated meanings—thus fortifying the institution’s grip over an artwork. This tension between the exhibition as an art form that can experiment and break with institutional constructs on the one hand, and the exhibition’s simultaneous dependence on the institution on the other, is the most compelling aspect of Voorhies’ study.

Voorhies arranges his analysis into four chronological sections, beginning and ending with Höller’s works which represent the current moment in the historical trajectory of contemporary art and exhibition as critical form. Voorhies clearly designates the exhibition and its connection to the public as well as the spectator as fundamental to his study. He draws upon previous scholarship on theories of participation and relational aesthetics but sets his study apart by using the term ‘apprehension’ instead of ‘participation.’ Whereas participation entails an active “taking part in something that […] has a purpose toward an intended outcome,” apprehension “suggests a durational quality of becoming that forgoes absolute comprehension in exchange for awareness via multiple senses that go beyond simply concrete knowledge” (14).

This apprehension of the spectator can take many different forms. Voorhies begins his analysis with Robert Smithson’s series of works called ‘non-sites’ (1968) which encompass different media such as photographs, text, and mineral samples that correspond to a site outside of the museum. The individual components do not necessarily make sense on their own, but they encourage the viewer to walk around, and to try to connect them. It is this durational engagement of the spectator that prompts questions about space, exteriority, and the exhibition as technique. Voorhies takes Smithson’s ‘non-sites’ as “the earliest move toward artists thinking about and utilizing the exhibition as a critical form” (32).

Another example is Thomas Hirschhorn’s The Bijlmer Spinoza-Festival (2009), an exhibition that took place in the Amsterdam neighborhood of Bijlmermeer over the span of two months. The exhibition comprised a pavilion where daily events such as lectures and workshops took place, and was accessible at all hours. Voorhies describes how particular aspects of this exhibition such as the content of the lectures, the location of the exhibition or the use of cheap and unsustainable material for the pavilion turn Hirschhorn’s festival into a space that creates confusion, disrupts conventions, and involves the spectator via multiple senses. While this example may seem to openly invite the spectator to participate, Voorhies shows how Hirschhorn’s reflexive stance and engagement with the Bijlmermeer community allowed him to maintain complete responsibility over his exhibition, never assigning an intended purpose, and thereby preventing the spectator from completely taking over the interpretative responsibility of the work.

Another particularly interesting moment in the book is Voorhies’ readings of Martha Rosler’s photomontages and Josephine Meckseper’s vitrine works. Voorhies uses their works to show how art’s critical efficacy may become undermined. Voorhies explains how corporations increasingly resort to an appropriation of political aesthetics. In Meckseper’s Untitled (Vitrine) (2005), for example, the artist strategically arranges luxury objects next to contrasting objects such as a photograph of a female sweatshop factory worker. Connecting such aesthetics with the example of a Levi’s advertisement and the many corporations using the Occupy Wall Street Movement to their economic advantage, Voorhies illustrates the precarious position of critical art today; threatened to be absorbed by the capitalist market in the blink of an eye.

Apart from his close readings of exhibitions, Voorhies undergirds his analysis with the writings of Jacques Rancière, Walter Benjamin, and Michel Foucault. Short theoretical excursions allow Voorhies to meld the critical with the political. Apart from these theoretical underpinnings, Voorhies’ study always contextualizes exhibitions within their respective contexts, critical discourses, and movements. Voorhies’ selection of exhibitions and artworks is certainly diverse in terms of their form and content, however, significantly more space is given to (white) men’s artworks and writings than to women’s. Furthermore, it remains to be seen if Voorhies’ study proves to be useful in a larger context of non-Western art where certain theoretical concepts and genealogies might not be applicable.

Nevertheless, Beyond Objecthood skillfully traces and elucidates the genealogy of the exhibition as a critical form in the Western art context, while also illustrating capitalism’s relentless grip over critical art and the exhibition’s incessant dependence on the museum. Voorhies leaves the reader with this thought-provoking quandary, auspiciously emphasizing the importance of dissensus in keeping critique alive.