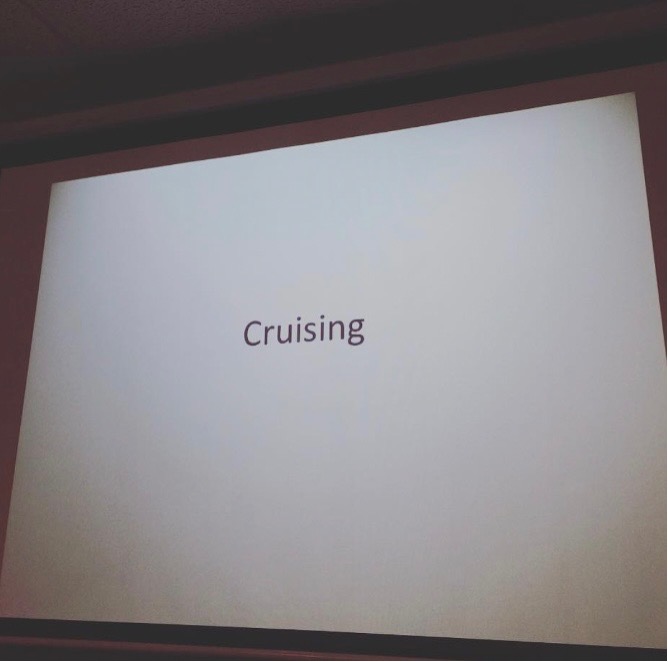 When I walked into the seminar room and saw the word “Cruising” projected onto the vinyl screen, I thought, with a budding sense of satisfaction, “This is why I’m in grad school.” For years, I had fantasized about the Hudson River piers that David Wojnarowicz writes about in Close to the Knives; now I had the chance to learn from someone who experienced them, someone who was there. Douglas quickly reminded me that while the pleasures found at the piers were invigorating (sex, friendship, sunbathing), there was also danger present at every turn (robbery, assault, murder) and every step (the wood was so decayed that it could give way). Our discussion of Alvin Baltrop’s photographs made this starkly clear: in addition to the alluring images of beautiful men fucking in dilapidated settings, there are also images of corpses and police investigations. This distant violence, as well as Wojnarowicz’s intoxicating way of writing about these dangers, informed my romanticization of the piers. I had to use my imagination to picture taking the risks for pleasure that Douglas, Wojnarowicz, and my other heroes took; in 2015, I could never experience those worlds because they were lost. But when I tried to make an analogous connection between cruising the waterfront and scrolling through Grindr, Douglas turned to me and said, “I’ve never had a Grindr, but I think I know how it works.”

It still surprises me that Douglas loved Los Angeles. Maybe his fondness for it had something to do with so many of us associating him with New York City. I went a different route: I left Southern California for Western New York, mostly to study with Douglas but also to get away from a place I felt I could learn nothing else from. Once in Rochester, I traveled to NYC as often as possible because I fell in love with it. I made new stories there, became different persons, and grew up in ways I couldn’t in LA. It’s hard for me not to compare the two cities, but I don’t think Douglas felt the need to because they were obviously different. He never shied away from the obvious; in fact, he valued the complexities of the obvious as a means of possibility. I think this is partly why he disliked my final paper on David Hockney’s swimming pool paintings: it was overcomplicated and lost sight of the obvious sexiness in the works. The value, joy, and even the eroticism of the ordinary later struck me when I visited the Schindler House in West Hollywood (one of Douglas’s favorites) and could feel coolness emitting from its concrete walls. I remember Douglas telling us that this was intentional (an effective and cheap way of keeping the house hospitable in the California heat). But what he didn’t tell us is how at certain moments when the air is disturbed in an almost empty house, it feels like the walls are breathing on you. An erotic detail in the obvious, somewhere between form and function, only to be found in LA.

I’m not sure if the other students would agree with this, but Douglas’s dance class felt queer. It takes, I think, a certain kind of person to want to take a seminar on dance, dance films, and films of dances (important distinctions for Douglas). Our group was composed of women (some queer, others not) and men (all queer) who took the class out of curiosity for the subject, a desire to be taught by Douglas, or a mixture of both. The class felt absent of the antagonisms that seem endemic to seminars (why is there always that one guy? why have I been him?) The group was special because we wanted to be there and, as the semester progressed, we wanted to be there with each other. These relationships developed organically, but I should also mention that Douglas nurtured them in a delicate manner. Although it wasn’t required, the students in the class got together every Monday evening to watch the films. And although he didn’t have to, Douglas would join us week after week. Then, a revelation. The night we watched Martha Graham’s Appalachian Spring, it all seemed to click: the aesthetic (Noguchi’s minimal set, Copland’s melodramatic score, Graham’s expressive movement) and the experiential (a grainy projector, snow tapping on the window, friends and a teacher in awe) were in harmony. “I love this,” I blurted out at the end of the film; Douglas looked surprised, then pleased. When we met for class the next day, he asked us to share what we loved about it.

My last semester of coursework: I felt like a senior before summer even though the season betrayed me. (I was also giddy from a schoolboy crush I had on another student in the seminar, which I’m certain Douglas recognized—my crush and I would gossip and smoke cigarettes during the midway breaks of each class, one time exceeding the allotted fifteen minutes, a tardiness which I was told led Douglas to playfully ask the class, “Where are the boys?”—and liked). For all that has been written about the anguish of desiring another (think of Barthes’s “the one who waits”), that position didn’t feel deleterious in Douglas’s seminar. Instead, we were using the grammar of Warhol that Jonathan Flatley brilliantly investigates in what was essentially our textbook. We were liking things. I could like someone (a classmate) or something (Warhol’s drawings), and that minuscule affirmation was enough. Douglas liked a lot of things and people, and his sharing of this information was a hallmark of his generosity and confidence. In his office, he would tell me about these things, some expected (like The Red Shoes) and others surprising (like Odilon Redon), without reservation. For many, Douglas oscillated between teacher and friend, braiding these roles together into a complex yet secured weave. He never asked or implied that I should return the favor (the only time I can recall Douglas asking me to do anything for him was to help pack books that he wanted shipped to his apartment in New York—I remember Lee Edelman’s Homographesis, although there were others—for something he was working on), but I knew I wanted to write him something personal, maybe even private, about why I liked Warhol’s queer drawings of men from the 1950s. I concluded that I liked them (Douglas pointed out that they resemble the Ellsworth Kelly plant and leaf drawings that he liked) because they demonstrate the minimal means by which one can affirm what they like (other men, a boy in class) and how they experience that liking (drawing, gossiping over cigarettes). To reach this conclusion, I had to do what I now realize I was learning from Douglas all along: cast aside decorum and begin writing from myself. That vulnerability felt threatening and taboo; I took my concerns to his office. He smiled and said, “You know Peter, I of all people am not going to dissuade you from using the first person in your writing.” Aye, aye, Douglas.