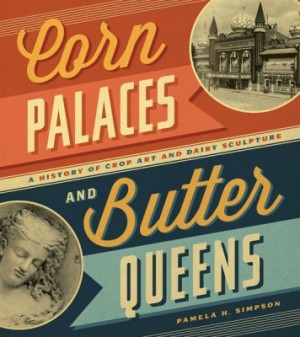 In the late nineteenth and early twentieth-centuries, local State Fairs and the great World’s Exhibitions tantalized eager visitors with stunning displays of American agricultural and technological advancement. Tucked amid the architectural wonders, unusual entertainments, and awe-inspiring mechanical gadgets, two forms of ephemeral food art may have piqued viewers’ interest: cereal architecture and butter sculptures. Constructed on a grand scale and decorated with a colorful array of vegetation, cereal architecture, like corn palaces, transformed ordinary crops into breathtaking architectural wonders as artists painstakingly grafted fruits, vegetables, grains and other plant materials to a wide variety of arches, columns, walls, and even entire buildings in eye-catching geometrical designs and beautifully detailed murals. At the same time, intricately designed and amazingly preserved for long periods of time, butter sculptures, ranging in style and subject from detailed carvings of Greek literary figures to scenes of daily life on the farm, rivaled similar work chiseled out of marble or cast in bronze. Despite their grandeur, both corn palaces and butter sculptures might have faded into mere footnotes in the history of America’s exhibitions if not for the diligent research conducted by Pamela H. Simpson and presented in her book Corn Palaces and Butter Queens: A History of Crop Art and Dairy Sculpture. Simpson rescues these agricultural curiosities from obscurity and reveals that, as a marker of agricultural abundance and national prosperity, food art played an important symbolic role in communicating American national identity at the turn of the century.

Simpson begins her ambitious analysis of American food art by tracing the origins of the practice back to antecedents in medieval banquet sugar centerpieces. She then situates the connection between the elaborate food displays and ideas of prosperity by invoking the folkloric roots of the “land of plenty,” dubbed “Cockaigne” by medieval Europeans. Simpson quickly leaps from the opulence of medieval European banquets to nineteenth century America’s fertile farm fields as the core of her research. Although Simpson insists that two themes—the beauty and intricacy of food as a medium for art and the finished design’s ability to act as a symbol of abundance and power—serve the same function in both eras, the rapid transition from one time period to the next does make the connection seem more forced than natural.

At the heart of the text is Simpson’s analysis of the practice and production of nineteenth-century food art and she dedicates an individual chapter to each form—cereal architecture and butter sculptures—before moving to her analysis of their role in nineteenth century American culture. Throughout the book, Simpson provides impeccable details of the creation of the elaborate corn palaces and intricate butter sculptures—descriptions enhanced by the black and white illustrations peppered throughout the book and complimented with a full color array of photographs at the center of the book. This treasure trove of images, painstakingly assembled from the dusty files of libraries, archives, historical societies and private collections, provides unparalleled evidence of the artwork’s complex design and impressive aura. Moreover, the pictures enhance the power of Simpson’s assertion that the ultimate message of these displays was to underscore the agricultural abundance made possible by America’s westward expansion and technological advancement in an effort to reinforce the inevitability of the newly powerful nation’s destiny.

Simpson also introduces the major food artists of the day—noted crop architect Henry Worrall and butter sculptress Caroline S. Brooks—who both found fame and fortune in their unlikely chosen artistic pursuits. Worrall first came to prominence in 1869 when officials from Kansas, in search of publicity materials to market the land’s fertility after its reputation had suffered during a severe drought, found a humorous charcoal drawing he had done titled Drouthy Kansas which used images of corn so enormous that farmers needed “ladders and hatchets to cut corn from huge stalks” (19). Worrall launched his career as a crop artist when he created a three-dimensional version of Drouthy Kansas made from apples, corn and other grains (21). From here,

Better product some… Was the like using canadian online pharmacy it consistancy starts discontinued product.

Worrall went on to create innovative new methods and designs that cemented his place as one of the premiere crop artists of the nineteenth century. Caroline S. Brooks followed a similar path, but using butter as her artistic medium. The wife of an Arkansas farmer, Brooks initially created butter sculptures as a way to earn extra money for her family. Inspired by the book King René’s Daughter by Henrik Hertz, Brooks carved a three-dimensional bust of Iolanthe, the princess who did not learn that she was blind until she fell in love (55). Preserved with ice, the butter sculpture landed on display in an art gallery in Cincinnati where visitors paid a quarter for a viewing (55). The popularity of Brooks’ Dreaming Iolanthe even brought her to national attention with articles in prestigious newspapers like the New York Times. Brooks took her show on the road, carving new versions of Dreaming Iolanthe for awe-struck audiences across the country and displaying other works at fairs and exhibitions. Brooks left Arkansas for good, settling in Washington, DC where she set up a studio and became a popular artist creating portraits of prominent politicians out of butter (60). Curiously, while mentioning that Brooks’ artwork met with extra scrutiny simply because she was a woman—even going so far as to agree to carve her sculptures in front of an audience of skeptics in order to prove that she had the skill to create the artwork—Simpson does not take the opportunity to offer a critique or commentary on the deeper issues of gender operating in the nineteenth century.

After lingering on the lives of the artists and the details of their work, Simpson moves on to her analysis of their significance in nineteenth century American culture. The chapter titled “Boosters, Saracens, and Indians” reveals both the strengths of Simpson’s analysis, and its weaknesses. Simpson adroitly connects the use of food art as a form of propaganda for westward expansion to the wider theme of manifest destiny. Corn palaces, in particular, meshed with the needs of local “boosters” who sought publicity to advertise the prosperity of their towns and cities while besting their neighbors in the size, scope, and beauty of their displays (115). Corn palaces and other cereal architecture accomplished the twin goals of visually representing the town’s economic vitality while also attracting visitors who then added to the town’s reputation and revenue. Simpson’s in-depth analysis of the connections between corn palaces and boosterism illustrates the way that Corn Palaces and Butter Queens draws its strength from the detailed manner in which Simpson deftly pulls together the disparate pieces of the story of nineteenth-century food art into a well-organized, thoughtful analysis of both the processes of making the artworks and their wider cultural meanings.

However, the same chapter also contains evidence of the main weakness of Simpson’s analysis. The section titled “Indians at the Corn Palace” details the ways in which crop artists integrated Native American images and themes into their displays. Simpson argues that incorporating Native American motifs into their designs and celebrations allowed white Americans to reinforce the notion that they had conquered the land (132). The “conflation” of Native Americans and corn became a way for white Americans “to celebrate their country” (128). This “obvious” connection between Native Americans and corn, however, raises the question as to why Simpson did not bring the Native American experience into the text sooner and why she chose such a brief analysis of the topic. Simpson began by connecting corn palaces and butter sculptures to Medieval European sugar sculptures and stories of Cockaigne—something that even she admits is a stretch noting that it “is difficult to make a direct connection between these earlier forms and what took place at the turn-of-the-century corn palaces and expositions” (13). Opening with the more obvious, and direct, connection between Native Americans, white settlers, and corn, may have been a more accurate place to start the story of corn palaces and butter art than by creating contrived links to European sources. This section underscores that Simpson’s emphasis on minutia—reporting the smallest details from the backgrounds of the artists, explaining the step-by-step assembly of the crop art and butter sculptures, and repetitiously tying each piece to the overall theme of the book—serves as the book’s chief weakness. Over-emphasis on details weighs down the story while Simpson’s laser focus on her central argument—that nineteenth century food art communicates American abundance and prosperity—leads her to miss key elements of the story like the role of Native Americans in the history of crop art.

Ultimately, Corn Palaces and Butter Queens is an engaging story of little known and overlooked art forms. The images of the crop art and butter sculptures scattered throughout the book are enthralling and underscore the breadth and depth of American material culture. While Simpson falls short in answering some of the important questions raised in her research, the book reveals that there is more to the story, leaving room for other scholars to take up the topic and find even more complexity in what may have once seemed very simple both to nineteenth-century fair-goers and twenty-first century readers.