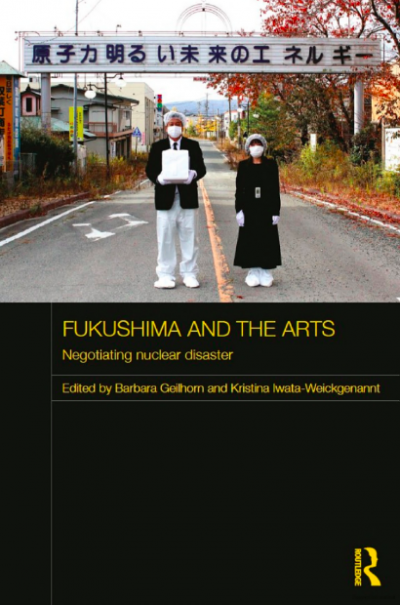 Review by Robert Yeates, Nagoya University of Commerce and Business

In their representation of events that are at once momentous and irreconcilable, artistic responses to trauma often navigate a difficult path. Cathy Caruth, in her seminal Unclaimed Experience: Trauma, Narrative, History (1996), writes that the traumatic event, as passed on through narrative, “does not simply represent the violence of a collision but also conveys the impact of its very incomprehensibility” (6). Reading responses to trauma through art is accordingly a tricky process, not least when there is a disparity in consensus between official reports and the lived experiences of survivors.

Such is the case with “3.11” and its aftermath. The triple disaster of earthquake, tsunami, and nuclear meltdown, which occurred in Japan’s Fukushima prefecture on March 11, 2011, continues to have a palpable impact on contemporary Japan. The invisible and insidious influence of nuclear fallout, radiation, and reported discrimination against evacuees from Fukushima has disrupted the culture and communities of the region, threatening tradition, conventions, and modes of living. It is the effect of this impact on the arts of Japan which Barbara Geilhorn and Kristina Iwata-Weickgenannt focus upon in Fukushima and the Arts: Negotiating Nuclear Disaster. Over the course of twelve chapters, the book brings together several artistic works concerning 3.11 by artists both in Japan and abroad. The resulting collection depicts the process of interpreting and responding to deep societal trauma, and offers “a contribution to the research of the cultural dimension of the disaster, which is a still developing field in Japan and beyond” (11).

The artistic media assessed in the book include theater, film (both documentary and feature), poetry, literature, music, and photography. The specificity of the chapters themselves, which are generally concerned with close reading a handful of key artistic works, prevents the collection being too unwieldy despite this breadth in scope. In fact, the focus of the chapters infers the broader context of post-3.11 arts in Japan, depicting opposing and often contradictory interpretations and attitudes. Fukushima and the Arts also features artistic responses from outside Japan, for, as scholar Saeko Kimura’s chapter demonstrates, immediately following the disaster “the Japanese people were mostly unaware of the reality of radioactive contamination. […] It was left to those writers living in Europe to spark and lead the intellectual discourse of the Japanese literary sphere” (77). The collection consequently succeeds at appearing thorough, with significance far beyond the scope of the limited number of case studies it presents.

Certain ideas recur throughout the book. Principal among them is the distinction between the personal responses to 3.11 in the arts and the dominant narrative perpetuated by the Japanese government and the “nuclear village” (genshiryoku mura), “an intricate economic-political network of corruption” (4-5). The essays suggest that in the years since the disaster there has been a failure of the government to adequately attribute responsibility or blame for the human-made consequences of 3.11. Instead, there was an “overemphasis on recovery (fukkō)” (24) which eclipsed the ongoing human suffering and destruction of livelihoods in Fukushima and the Tōhoku region, with oft-repeated slogans such as “Ganbarō Nippon (Chin Up, Japan!)” (39) permeating media coverage. The artistic works assessed in the book are often shown to interact with the dominant, official narrative of recovery, whether accepting it as truth, offering critique, or simply up-ending it altogether. Rachel DiNitto makes this case particularly clearly in her chapter “Literature Maps Disaster: The Contending Narratives of 3.11 Fiction.” Arguing that official narratives have “regionalized the disaster, geographically and socially isolating Tōhoku” (22), DiNitto depicts the efforts of fiction writer Shigematsu Kiyoshi to record individual human experiences of 3.11, expanding “the circle of solidarity” in order to encourage readers to “identify with the local struggle” (23).

Many of the chapters in Fukushima and the Arts offer provocative and compelling readings of how the arts have responded to 3.11, with chapters on documentary films, gender, the “uncanny anxiety caused by radiation” (74), and theater among the highlights. Given its specialized focus on post-3.11 artworks, however, the book might have benefited from more liberal editing of historical and factual data.  Several of the chapters start out by repeating the same particulars of the disaster and its aftermath, almost giving the impression that the book was intended less as a cohesive volume than as an assemblage of related essays. It should also be noted that many of the artistic works discussed are not available in English translation, narrowing the audience of the book from the general reader to those more specialized in Japanese studies.

The twelve chapters of Fukushima and the Arts offer close readings of several noteworthy artistic works. While the collection may be more of interest to people interested in these particular works rather than casually reading around the subject, the specificity of the case studies demonstrates that there is no single coherent response in the arts to the events and ongoing consequences of 3.11, either within or outside Japan. Consequently, this volume conveys the fragmentary and varied responses across the arts to a trauma itself so multifarious and so defying of quantification.