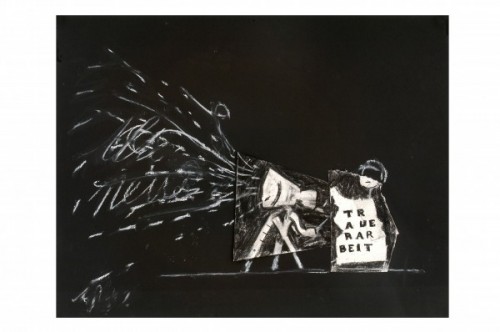 William Kentridge is principally a maker of drawings, but his work of drawing extends itself into the making of sculptures, animated films, theater works and operas, books, installations, and a myriad of more hybrid works that are difficult to describe. You might think of the artist’s drawing in this sense as a drawing out, a drawing up, and a drawing forth. Or a drawing across. It is also like the drawing of a bow—and one knows from the end of the Odyssey that this is not an easy thing.

Among many images from Kentridge’s work that stick in my memory is one from the installation piece “Black Box,” first shown in Berlin in 2005. You could describe this as a kind of mechanical toy theater, an elaborate construction with a series of odd, homely automaton figures, clockwork creatures moving back and forth across the small stage, further elaborated with a complex program of projections—including animated drawings by Kentridge, both abstract and figurative, photographs of old newspapers and ledgers, as well as archaic film footage. What I remember from this piece is a figure no more than ten inches high. Its body, if you can call it that, is a rectangle of paper projecting a little forward, like a sandwich board. Its one limb, or its spine, is a jointed metal rod ending in a tiny paper cone, a little like a megaphone, a thing that it that throws about with a kind of nervous energy. This paper cone, you start to sense, is the organ with which it at once speaks and watches and listens. The figure is a curious, somewhat comic entity, a composture of fragments, an improvised being, something like Kafka’s Odradek. A stack of block letters drawn on the paper body spell out the German word “trauerarbeit,” Freud’s coinage for the “work of mourning.” Looking at it, you wonder what kind of mourning this tiny creature could undertake or recommend. Yet you cannot escape the question of mourning in this piece, for which the figure is a kind of nuncio or chorus. For “Black Box” is a piece that interrogates, along with some haunting passages of song from Mozart’s “Magic Flute,” the historical record of the 1904 massacres by German Colonial forces of tens of thousands of the Herrero people in what is now Namibia. 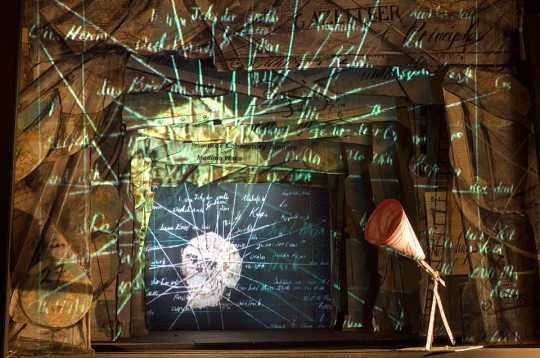 In his long poem “Metempsychosis,” about the passage of a nameless soul from one grotesque body to another, John Donne asks his Muse, or God, to “make my dark heavy poem light, and light.” There is an intense and mysterious poetry in William Kentridge’s work. It comes through simply in the power that the line of a drawing has to shape, or excavate, an idea or impulse as it moves, to give form to a simultaneously inward and outward gesture, a movement that seems to belong to both human bodies and the inanimate objects, microscopic and astral forms. It is a line that, in the animated films, can seem to move at once more slowly and more quickly than you thought possible, though this may be no more than the speed of a man walking through a room. You finally don’t know what is fast and what it slow. 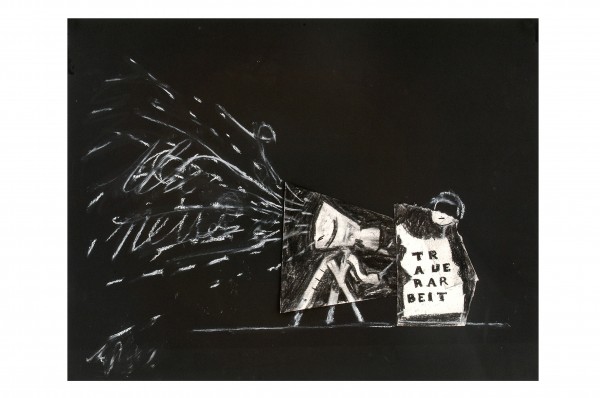 Kentridge’s work delights in transformation, metamorphosis, as is often observed. A nude torso becomes a coffee pot. A cat leaps on a human face to become a gas mask. A workman doing a wild dance with two shovels becomes a pair of flapping wings. Ants become wandering stars. A typewriter becomes a heartbreakingly beautiful rhinoceros. A stone monument opens its eyes, and breathes. Sometimes these changes are momentary, a form of freedom, at other times cyclical, inescapable, as in his flip books. It echoes the logic of metamorphosis in Ovid. The sheer fancy and visual wit of these things are powerful. But what makes such exchanges of form more than merely fanciful or arbitrary, is the sense that each new form responds to some odd specific gravity, a gravitational pull, some buried pressure that was not otherwise visible in the original form of things, some hidden impulse that makes the change feel inevitable as well as surprising, that makes you wonder as much about what the thing was as what it has become. It is newly discovered gravity, also, to borrow a phrase from Italo Calvino, a kind of weightless gravity, something undiscovered but remaining in plain sight, parts of a possible world, as if the weight of things and of ourselves, the most basic fact of our bodily existence in the world, were no longer so simple.

It is hard to describe this—it can seem at once plain and elusive. In speaking about it here, I feel as if I have driven myself into a knot in my own thinking. I think I must leave it now for William Kentridge to untie the knot or to tie it more tightly. Please welcome him.

* This is a slightly revised version of Gross’s introduction of William Kentridge at the artist’s public lecture on September 19th, in the Interfaith Chapel, University of Rochester.