“My name is Angie. I’m eight years old and I am playing the bass violin. The bass violin has four strings. It’s a really big violin that can be used to do this,” as she demonstrates by playing. This is the first captioned line of a short documentary in Spanish titled Cornflakes: Desayuno en Juárez (Cornflakes: Breakfast in Juárez). In the scene that follows, we see Angie, Cornflakes’ protagonist, sitting against a green wall holding the bass violin, taller and wider than her eight-year old frame, telling us how many strings the instrument has. She looks down with concentration to pluck each with the petite fingers of her right hand. With each sound, she offers a description: “One is called ‘Sol,’ another ‘Rey,’ another ‘La,’ another, ‘Mi.’” The scene ends with Angie’s pronouncement: “that’s how my life began” [Fig. 1]. 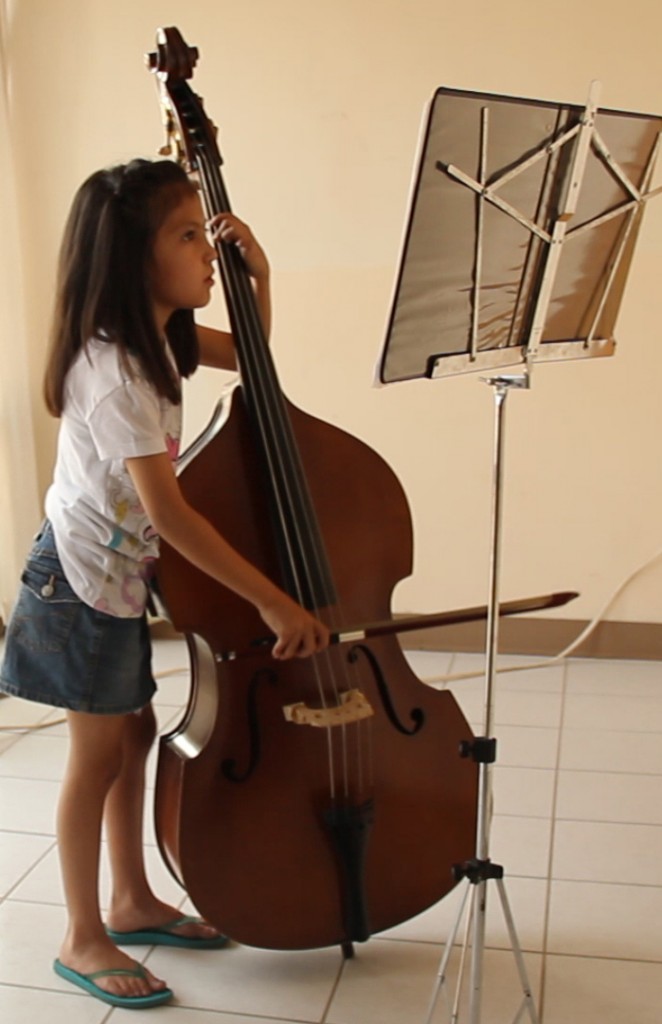 Angie is one of 195 youth musicians in La Orquesta Sinfónica Infantil de la Universidad Autónoma de Ciudad Juárez (UACJ), the Children’s Symphony Orchestra of the University of Juárez. Over the course of an academic year (2011-12), La Orquesta sent eight instructors to five
different Juárez schools located throughout the city. Sectional instructors including Arturo Iván López (under the direction of Carlos García Ruiz), whom we hear prompting Angie to describe her bass violin in one of the opening scenes, prepared the students for a final recital that took place on May 26, 2012, where they played Beethoven’s Ninth Symphony, “Ode to Joy” [Fig. 2 & 3]. A sea of polished instruments, music stands, matching sequined gowns and tuxedos with satin lapels; La Orquesta’s rapturous performance stands as a brief interlude in a dissonant city recently characterized as the most dangerous in the world.1 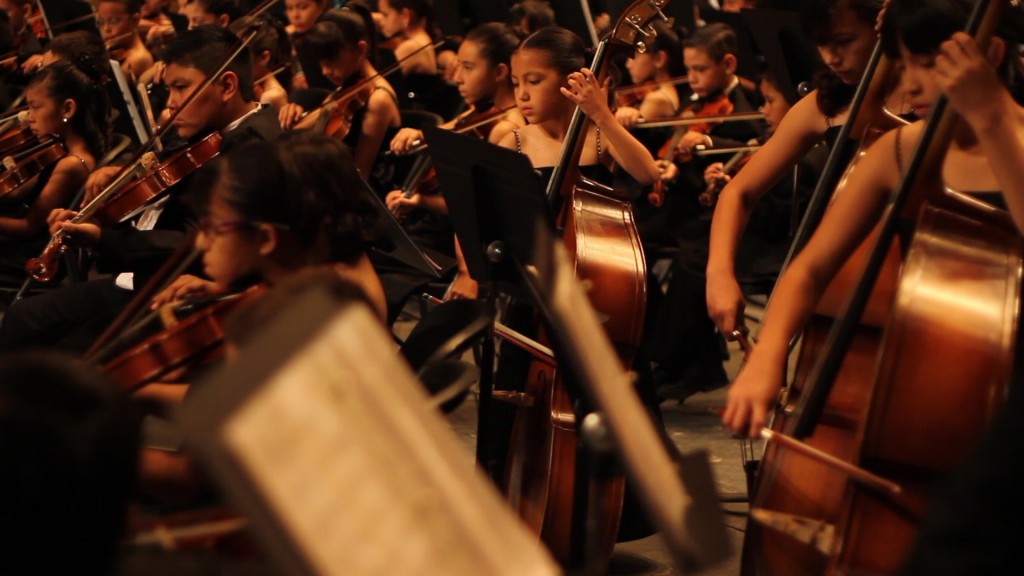 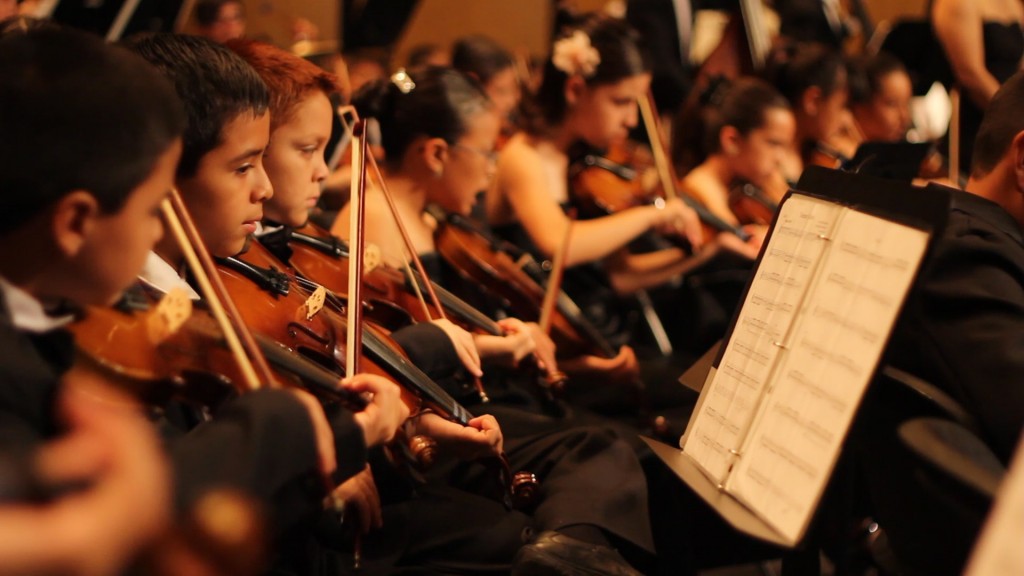 An astounding 2656 people were murdered in the city in the time since La Orquesta’s founding.2 In the last seven years, Juárez has seen at least six thousand murders resulting from drug cartel hostilities.3 The last twenty years have been witness to the rape, torture, mutilation, kidnapping and murder of women, teenagers, and girls, and this violence has claimed hundreds of lives, almost sixty in 2012 alone.4

My friend Robert Gómez Hernandez, whom I’ve known since we both shared a painting studio at the University of New Mexico five years ago, filmed and edited the material for two short documentaries: La Orquesta Sinfónica Infantil de la Universidad Autónoma de Ciudad Juárez, which includes the footage of the final recital, and Cornflakes, a character profile of Angie. Both projects grew out of prior collaborations with social justice groups in northern Mexico that plugged Robert, a recent MFA graduate of California College of the Arts in San Francisco, into a network of political workers that sought to curtail the city’s violence while also engendering new forms of cultural production.

These projects generate questions regarding whether a city such as Juárez can be portrayed in ways other than those with which we’re familiar. Which begs another question: what are the ethical stakes of a representation that seeks new ground? While I’m not sure that these questions guide Robert’s production decisions, I do see these two documentaries as embodying the tensions of a city whose image is overdetermined by death and absence.

Indeed one recent headline from the New York Times reads: “Wave of Violence Swallows More Women in Juárez, Mexico.” Its accompanying image features posters of countless female faces, portraits of women who were the victims of femicide. Those vanished women, the article goes on to describe, have become mere apparitions, present only in likeness. Standing in for the missing bodies, the posters then repictured in the article, continue an ongoing chain of absence. But Cornflakes and La Orquesta Sinfónica Infantil pry open a space within this constellation of words and images, themselves specters haunting the city, for considering how or whether it is possible to speak or think differently about Juárez.

The tension at the heart of either documentary, then, lies in referencing the city’s violence without ever picturing it as such. This is an uneasy space to inhabit insofar as the objectives of social justice organizations are to bring political and media attention to femicide and narco-related violence. The documentaries, however, grapple with these issue differently. While the first argues that music is reparative, the second, with its emphasis on Angie, intimates Juárez’s presence; it references the city more obliquely. 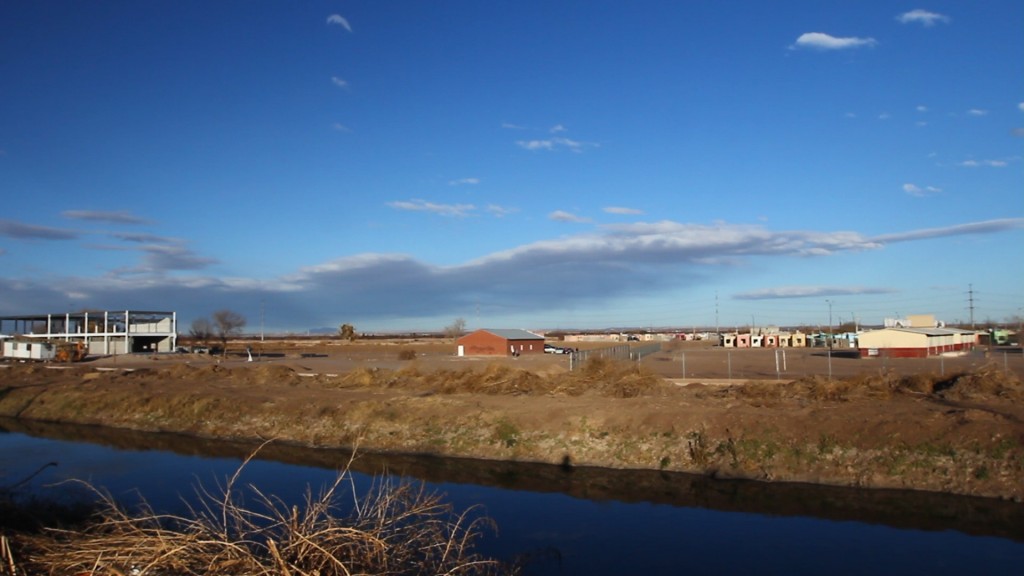 In the opening scene of La Orquesta Sinfónica Infantil we see a brown, placid waterway [Fig. 4]. The Aguas Negras canal, Celeste notes, is the dumping ground for bodies, a site where loss brushes up against life. Along with Celeste’s voiceover, the notes of her violin accompany this opening scene. Eventually other orchestra members and instruments join Celeste’s violin as the documentary progresses. Robert lingers on their faces in close-ups as the music builds, layer upon layer, from smaller rehearsals amongst the five schools, into a collective rendition and final performance of Beethoven’s Ninth, the documentary’s climax. Despite the filmic, musical and emotional crescendo into the final performance, an audacious conclusion for the documentary, La Orquesta dissolved after one season due to funding cuts. 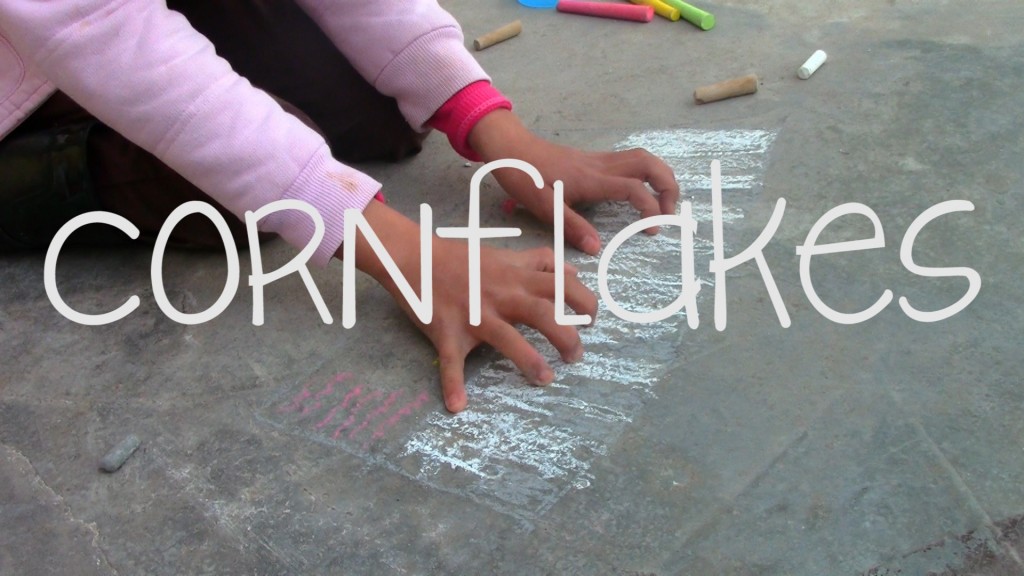 No longer able to record the progress of La Orquesta, Robert conceived the second documentary, Cornflakes, a brief sketch of a precocious eight-year old who, as it turns out, did most of the documentary’s filming. Supported by the McNamara Family Creative Arts Grant from the Hispanic Scholarship Fund, Robert purchased cameras and equipment to teach five students, including Angie, how to film. He allowed Angie to keep one camera, offering prompts from San Francisco. He asked Angie in one conversaton to film herself playing a song for her best friend. The resulting material serves as the basis for the documentary’s opening: Angie pretending to play a piano drawn in chalk on the sidewalk for her dog Fifis [Fig. 5]. In a majority of scenes, Angie speaks directly to the camera as if making a video journal about her life. In a handful of others, she has conversations with her instructor Arturo Iván López. 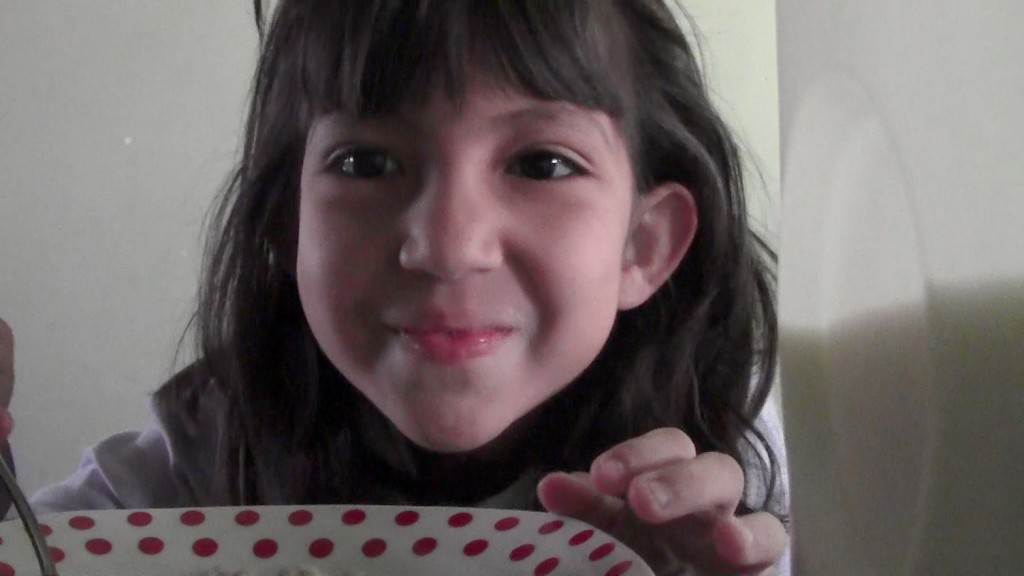 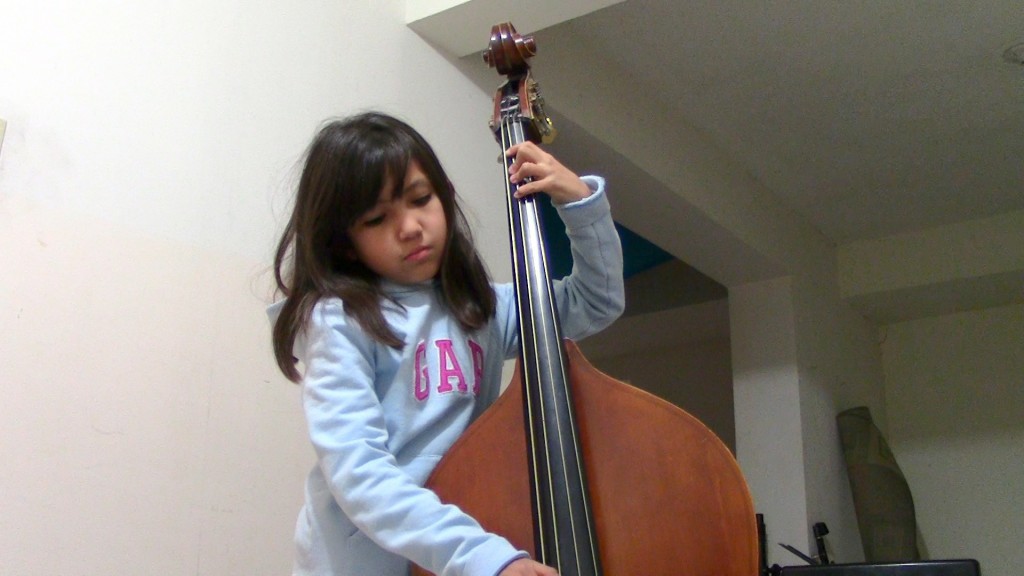 In a little over ten minutes we also see Angie going to school—a building surrounded by a barbed wire fence—reading music, practicing her instrument, attending recitals, and as the title suggests, eating breakfast. In the scene that follows her initial description of the bass violin, Angie, still dressed in her pajamas, sits in front of the camera, propped awkwardly on the kitchen table, to pour a bowl of cereal and milk. With each task, Angie tells us about the virtues of eating cornflakes (which is synonymous with cereal for her), the best breakfast for musicians. This brief moment and the whole of the documentary for that matter is less about La Orquesta, a collective group of musicians from diverse class backgrounds, and more about Angie’s mundane activities, including eating breakfast [Fig. 6 & 7].

Mundane is tricky here. For many like Angie, the terms of day-to-day life have shifted immensely, or perhaps in her eight years not shifted at all, but rather have made the graphic proximity of death an everyday fixture of life. This is what strikes me about mundane in a place like Juárez. It means differently there. Neither uneventful nor unremarkable in the typical sense, mundane epitomizes the tension between the everyday and the everyday of violence, the frequency with which it takes place as much as the frequency of its representation. It seems important then, that this documentary is so very quotidian, given that hyperbole, violence and political turmoil are so much a part of Juárez’s ethos. I see this documentary as the more powerful of the two because for all of its everydayness, Cornflakes dialogues with and serves as a counter to other more totalizing renditions of Juárez. Which isn’t to say that the documentary does not conjure the city’s reality. On the contrary, the image of barbed wire surrounding an elementary school, seen from Angie’s perspective, connotes tacitly though still very powerfully.

Less heavy-handed in its message than its predecessor, Cornflakes is no visual jeremiad. Nor is it a heroic crescendo. It unfolds, rather, without an overarching goal. That is, without a final performance driving its creation, Cornflakes lacks the musical and emotional apotheosis of its predecessor. Instead, Angie holds our attention by describing the virtues of cereal. The documentary ends with her description of a self-portrait as a superhero. Her superpower, she explains, is to turn bad villains good.

I resist the urge to neatly tie up the documentary’s aims by making a pronouncement about how amidst the city’s chaos, Cornflakes offers a hopeful protagonist. This seems like a utopian overstatement. Rather, I see Cornflakes as a compelling expression, because of its everydayness, of the possibility with which we might begin to imagine Juárez anew. I understand that change within the city and change in how we (those of us in the US and elsewhere) perceive the city are necessarily different in kind. No doubt, one form of change is more urgently necessary than the other. No doubt, La Orquesta’s funding cuts are symptomatic of broader political shifts that affect Angie and the rest of La Orquesta in profound ways. Still, Angie is no apparition. She is present, a collaborator in the making of her own image.5

Alicia Inez Guzmán is a PhD candidate in the Program in Visual and Cultural Studies.