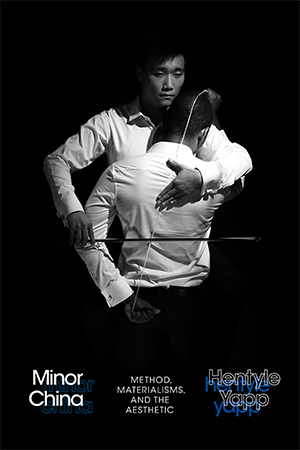 At first glance, the title of the book, Minor China, seems to counterintuitively belie China’s dominance in the global economic and political order. However, Hentyle Yapp temporarily suspends the political condition of China and returns China to a minor epistemological position in order to trenchantly challenge the proper noun “China,” which has been bracketed and seen as the Other or counterpart to the West. By reorienting readers’ attention to affective and molecular movements (proposed by Gilles Deleuze and Félix Guattari), minor methods rescue Chinese contemporary art from being assimilated by the global art markets, either in discourses or international exhibitions. Yapp uses the term “minor,” which resonates with Marxist ideas of social structuration, to reflect on theoretical assumptions entrenched in ideologies of liberalism, inclusion, and racialization (5-6). For him, “minor” is a strategy to undo the overdetermined Western frameworks that presuppose universal ideas and liberal languages in gauging minor subjects and non-Western art.1 His project is a profound reexamination of the discursive structure by the minor and a renegotiation of the existing structural problems in intellectual realms dominated by the West. (14)

The first chapter traces the historical contexts and artistic practices in China before, around, and after 1989 to examine how China became a proper form to the Western imagination. With the rise of global late liberalism, China has become the super-referent for notions of illiberal and racialized Others in the post-Cold War West. (54) The 1989 Magiciens de la Terre at Pompidou emblematizes the late-liberalist curatorial approach that views Chinese contemporary art as the counterpart of Western art. This approach strategically occludes historical and structural racism and its part in Western systems of “inclusion,” which indiscriminately incorporate Chinese contemporary art. (57)

The second chapter examines Ai Weiwei’s Fairytale (2007) displayed in Documenta 12 in Kassel. This project not only exhibits physical objects but also selects and brings 1,001 Chinese people with distinct backgrounds to Kassel during the art festival. Although Fairytale was often discussed with the aesthetic of repetition, mass, and multitude, Yapp instead uses the notion of a “comrade aesthetic” to revise the Marxist notion of lumpenproletariat, looking at affects and racial anger.2 In Yapp’s reading, Ai debunks three frameworks often used to address non-Western artworks on a global scale: intersubjective exchange, humanization, and plurality. Intersubjective exchange and humanization, as Yapp argues, picture a liberalist-subject approach to others with empathic connections, rendering the subject a universal idea. Yapp considers that Ai’s reworking of Chinese subjects resonates with Jean-Luc Nancy’s notion of being singular plural. Being singular plural connotes “a sense of being with,” rather than singular-to-singular as intersubjectivity insinuates. However, Chinese people have never been thought of as being singular because they “all look (the) same,” and therefore were pluralized. (89) This chapter reworks ideas of “the Chinese people” in order to provide alternatives to the notion of a “mass” or “plural” Others.

The third chapter deconstructs the ossified Oedipal triangulation between “the Western modern, the Chinese unmodern, and the dissident; the universal and global West, the particularity of the rest, and the avant-garde artist” by reconsidering Yan Xing’s video and performance work, Kill (the) TV-Set (2012), and two curatorial projects by Liu Ding, Carol Yinhua Lu, and Su Wei in 2012. (112) In Kill, Yanand Nigerian actor Agu Anumudu reenact the documented photo of Charlotte Moorman and Nam June-Paik’s performance Charlotte Moorman with Human Cello (1965). Yan and Anumudu’s performance video is juxtaposed with a video of a bonsai overlapped with flashing words, “Kill, (the), TV-Set.” According to Yapp, although citing Moorman and Paik’s playing of John Cage’s 26’1.1499, Yan not only reduces the sexual element in the original piece in which two artists were semi-naked but also makes his performance video silent and slow-motion. The referentiality between Moorman’s and Yan’s performances, between the bonsai and its association with the Oriental, becomes unclear due to Yan’s disinterested performance and his resistance to any grandiose narratives and conceptual appropriations. In this sense, Yapp argues that Kill generates a minor method, which reveals the frame of China’s otherness by problematizing the stabilized “particularity, referentiality, and representation.” (112)

The artists discussed in chapter four—Zhang Huan, He Chengyao, and Cao Fei—share the communal concerns of affect and performativity, even though their practices grapple with different issues. Instead of viewing Zhang and He’s works as merely dealing with political resistance and agency (the intentions to which Chinese behavior art has been often ascribed), Yapp lingers on the haptic and Buddhist meditation in their works in order to set his interpretive mode apart from the traditional way of viewing Chinese contemporary performance art.3 In his performance 12m2 (1994) shot by the photographer Rong Rong, Zhang smeared honey on his body and sat in a 12m2 public toilet in the Beijing East Village, enduring the smells and flies tickling his skin while practicing “being present with them.” (153) Meditation, echoing Foucault’s notion of technology of self, is self-cultivation that focuses on the awareness of the present moment and observes one’s consciousness. (154-155) He Chengyao’s 99 Needles (2002) has to do with personal trauma related to her mother as well as gendered inequality in China. In her work, He reperforms the inhumane acupunctural treatments once performed on her mother’s body on herself. Yapp argues that through self-engagement to this haptic experience, He feels and understands her mother’s past so as to rebuild her sense of self. (162) In a different vein, Cao Fei’s fabulations in Cosplayers (2004) and other works showcase the absurdity and artifice in everyday life. It opens the possibility of minor aesthetic categories (e.g. Sianne Ngai’s cuteness, zany, and lightheartedness) to be considered as part of the political imagination while also questioning felicitous performative acts.

Instead of only focusing on East Asian artists, Yapp brings issues of global labor, enslavement, and capitalism into consideration by elaborating on Isaac Julien’s Ten Thousand Waves (2010) in the penultimate chapter. Yapp does not intend to lump the enslavement and material condition of the Atlantic with Chinese indentured labor. Rather, he focuses on the minor forms in a Marxist sense and the currency of capital forms in contemporary scenes. Inspired by the 2004 Morecambe tragedy in North England, Ten Thousand Waves intersperses narratives of different historical moments—Ming Dynasty, 1930’s Shanghai, the North Wales shore, and a highly-capitalized China in present day—on nine screens. Yapp contends that separative images in this film installation present a never-unified world that resonates with but alters the Frankfurt School’s tradition of the Denkbilder (the thought image) and Deleuzo-Guattarian idea of monad that “collapse multiple histories and ideas into a single, minor object.” (177) In addition, the relations between different screens and locales create the image representing Édouard Glissant’s notion of tout-monde that links the inhumane, violent, and racialized situations across the history of slavery and the world. Tout-monde articulates the racial worlds that have been incurred by colonization and modernization. (190)4

In his rejoinder to minor methods—especially to the doubts of the ongoing issues in Hong Kong, Taiwan, and Tibet—Yapp confesses that his parents are from Taiwan and he was educated to view China as major. But he later realized the limits of this ideological education and decided to move towards Marxism to understand China. However, I argue that his argument is persuasive insofar as it undoes the hegemonic view of the West but cannot fully resolve the nuances and address the stakes in the art of, what he calls, “minor to minor.” This is because the political reality, though related to artistic practices, can never be conflated with artistic intention and the open-endedness of the works themselves. Keeping his parameter in Chinese and Hong Kong artworks circumvents the sensitive sovereignty issues between China and other political entities in proximity. Although Yapp provides us with a case study of Hong Kongese artist Samson Young in the afterword, more examinations of contemporary artworks and curatorial projects in Hong Kong, Taiwan, Singapore, and other Southeast Asian countries would be helpful to develop a relational thinking of the Chinese diaspora.