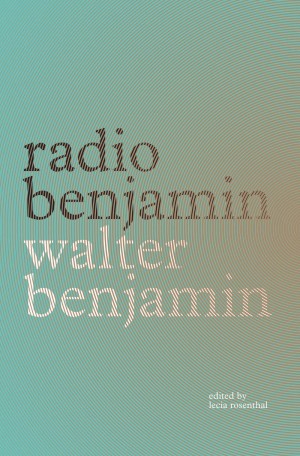 In view of the overwhelming popularity of Benjamin’s theoretical writings on the artwork, technology, and cultural-political change, it is curious that so little is known about his radio works. In fact, Benjamin produced around eighty radio talks, dialogues, and children’s stories for Berlin and Frankfurt radio stations in the late 1920s and early 1930s. Fortunately, Radio Benjamin finally compiles Benjamin’s most important pieces in this medium.

The relative absence of Benjamin’s radio works from scholarly literature on his work is understandable. This phenomenon is, first, a result of the relative inaccessibility of the written transcripts. Second, only parts of a single audio file have been preserved, resulting in a lack of essential information on the works’ auditory qualities. Third, Benjamin’s own comments on the works reveal his skepticism about their importance.1 One of the major achievements of Lecia Rosenthal’s carefully edited volume is that, contrary to Benjamin’s self-criticism, it shows how his radio works are far from disconnected from his oeuvre.

Benjamin’s children’s plays (section I) exemplify his vision of the radio as a multifaceted tool. In them, he aims to strengthen his young listeners’ sensitivities toward society by illuminating seldom-discussed side scenes (i.e., the Berlin Puppet Theater). Benjamin grants his audience novel access to Berlin through traces of its own irreversibly bygone past, and the tone that underpins his narrations often implicitly mourns the loss of Berlin’s previous guise. Readers of Benjamin will see familiar themes from works such as Berlin Childhood around 1900 2 emerge, whereas other themes underwent significant changes. For example, the marketplace has been transformed from an orgiastic, voluptuous spectacle3 to a rather alienating, competitive play of performative presentations. Throughout these radio pieces, especially Street Trade and Borsig, trade itself often appears as the major, self-regulating, and somewhat inaccessible cause of change.

The most astonishing pieces of this volume are probably Much Ado about Kasper and The Cold Heart (section II). Uncommon for a children’s story, these were broadcast in the evenings, inviting speculation as to whether they were produced only for the young. A striking variety of images dominates both stories and points to much broader sociopolitical dimensions. Kasper tells the story of the radio itself as a rather ambivalent medium, revealing its ambiguous and ever-shifting stance somewhere between the two extremes of totalitarian surveillance and effective proletarian emancipation through interactive education.4 The Cold Heart wonderfully retells a fairytale written by Wilhelm Hauff in the 1820s. This tale centers on moral and political conflicts, where moral sensitivity prevails over economic rationality. It tells the story of an outlandish place called “Voice Land,” where nothing can be seen—a striking analogy to the nature of radio. As such, it constitutes an implicit reflection on the medium’s inherent limits of adequate (visual) representation, while also acknowledging that this very feature might offer novel space for imaginative creation beyond the readily apparent.

Among Benjamin’s most significant theoretical contributions with regard to radio are Theater and Radio and Listening Models, presented in section IV. Herein, Benjamin explains his mission to broaden the reflective capacities of the recipient via methods of montage, whereby interruption serves as a “pedagogical tool” (367). He also cites Brecht as an inspirational source. Yet while Benjamin’s radio plays adopted Brecht’s distinct focus on didacticism, the “alienation effects” that Benjamin uses are arguably less radical.5 To add only a minor note to what is unquestionably an excellently compiled volume, one might have appended “Programm eines proletarischen Kindertheaters”6 (Programme for a Proletarian Children’s Theatre) and “A Communist Pedagogy,”7 as both shed further light on Benjamin’s account of radio’s educational role, especially in the context of class struggle. One statement from the former of these two works is particularly applicable to Radio Benjamin’s children’s programs: “It goes without saying that the bourgeoisie has its educational system. The inhumanness of its contents reveals itself only because it fails in the encounter with early childhood. Only truth leaves a productive impression on this age.”8

The question of class struggle is never absent from Benjamin’s radio works, but it is crucial to emphasize that Benjamin had no interest in promoting distinctively one-sided party propaganda. His emphasis on the role of truth in relation to the child’s immunity against ideology is striking in this respect. The messianic-utopian element that Benjamin found illustrated in Klee’s Angelus Novus recurs here in the child’s own purity, which preserves its capacity for independent reflection. Above all, Benjamin’s aim in presenting these radio works was to sharpen the recipient’s sociopolitical perception at its most fundamental level. Radio Benjamin might thus best be read as a practical addendum that gives us an idea of the producer within the author Walter Benjamin—in precisely the sense that he so thoroughly described in “The Author as Producer,”9 namely, as an “operative writer” whose “mission […] is not to assume the spectator’s role but to intervene actively.”10

It is more than fortunate that the editors of this volume have finally tackled the task of translating these plays into English, and that the translation is a careful one that manages to preserve much of Benjamin’s style even in the face of truly untranslatable phrases and rhymed sayings, e.g., in Kasper. One can only hope that, as Lecia Rosenthal remarks in her preface, critical scholarship will follow, helping to resolve the “questions about how to approach […] the interactions between the radio texts and his other work” (xxv). Many of the radio plays illustrate how Benjamin’s role as a producer contributed to his later thought,11 demonstrating an ongoing interaction between theory and praxis underpinning his oeuvre. If, as Benjamin suggests, there is no clear distinction between the author and the producer, we should consider his work as a producer more seriously. It is time to open a much-needed dialogue between these carefully produced plays and his better-known works.