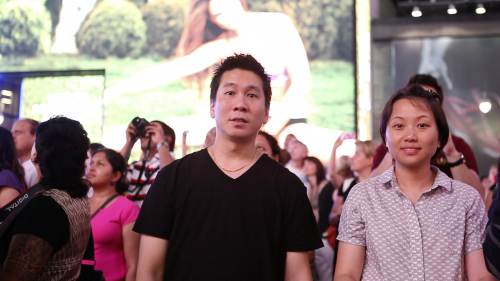 Seeing / Being Seen is a reflection on tourism, spectacle, and surveillance. The ubiquity of cameras at cultural sites like Times Square has shifted the memorializing function of the camera. The camera as a tool for experiencing place is nothing new but it becomes much more pervasive when digital cameras allow for almost limitless recording. The ritual of photographing oneself at cultural sites is often more important than the resulting photographs. The role of the camera becomes complicated in places like Times Square, which are so highly surveilled. Tourists point hundreds of cameras up at billboards and lights while at the same time nearly as many cameras are pointed down at the crowd. Autonomous, ubiquitous, and tacitly accepted by the crowd as necessary, the function of security cameras is not questioned and often the cameras themselves are hidden from public view. With cameras above and cameras below, the process of seeing and being seen becomes reciprocal. I first visited Times Square in 2000 and each time I returned I noticed an increasing security presence. I filmed this series by placing my camera on a tripod and walking away from the scene. After reviewing the footage, I became fascinated by the confusion and violation in the subjects’ eyes when they noticed my camera pointed the wrong direction. These looping video clips slow down and emphasize the exact moment when my camera was seen. The function of my camera wasn’t conforming to the role of tourist or security, instead existing in an uneasy place in between.