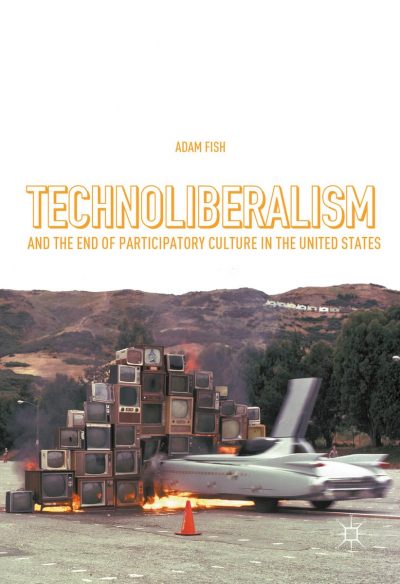 Reviewed by Christian Rossipal, NYU Tisch School of the Arts

Adam Fish. Technoliberalism and the End of Participatory Culture in the United States. Palgrave Macmillan. 2017. 225 pages.

Following the March release of the Trump administration’s “skinny budget,” and its proposed elimination of virtually all federal funding for public broadcasting—as well as for arts and humanities initiatives1 —Adam Fish’s Technoliberalism and the End of Participatory Culture in the United States comes as a timely volume, examining television as a democratic tool in the struggle for and of participatory public spheres in the media. Informed by the author’s own ethnographic research, the framework is a political-economical historiography, ranging from late 20th century corporate liberalism-regulated television to the unregulated Internet of contemporary neoliberalism. In this contested and overdetermined field, Fish situates the notion of technoliberalism as a designation of certain discourses on technology—most often coupled with deregulation—which seeks to invalidate the need for participatory politics. Fish outlines how these discourses are mobilized to “mitigate the contradictions of liberalism” itself.2 By connecting American television history to recent Internet conglomeration and monopolization, Fish shows how democratized platforms have been assimilated by the logic of capital.

Drawing on over three years of fieldwork, Fish offers details and insights into key organizations in the history of American social liberal television networks at the intersection of profit and political ideals. These networks all tap into a recurring trope: citizen journalists of different decades being “empowered” by technology—be it 16mm film cameras, 3CCD video cameras, cell phones, Twitter, or YouTube. With a close study of Al Gore’s alleged “progressive network” Current TV—and its use of underpaid amateur videographers—Fish shows how technological empowerment rarely have any lasting effects on media institutions themselves, especially if they are trying to make a profit off of such democratic participation.3 Even nonprofit progressive television networks such as Free Speech TV (FSTV) comply with corporate liberal media policy. Fish shows this by outlining how FSTV was complicit in legalizing commercial and monopolistic broadcasters.4 Thus, Fish situates public television in the United States as a counter-hegemony, complementary to the “corporate hegemony” of TV production—not an anti-hegemony. Further, he asks whether anti-hegemonic information infrastructures are possible at all under corporate liberalism or neoliberalism.5

Today, the notion that new technology brings democratization is often found in digital discourse—a term coined by sociologist Eran Fisher—and its convergence myth with ideas of “solutionism.”6 However, in practice the vision that the internet could constitute a true public sphere for participatory politics has been replaced by a “gold rush of acquisition” according to Fish.7 Instead, the digital discourse itself lives on and is used to mitigate contradictions of liberalism while the internet is being dominated by capital.

Surprisingly, Fish does not critically consider the otherwise so oft-cited Habermasian concept of the bourgeois public sphere. Fish relies on his own terminology, with a focus on his conception of “technoliberalism” and its iterations, as well as critical readings of the models used by the industry itself. Christian Fuchs, a leading post-Habermasian voice, would agree with Fish that the Internet has basically turned from a participatory public sphere into a capitalist venture.8 In my reading of Fuchs, however, there are some additional insights that could complement Fish’s analysis.

For instance, Fish’s claim that that the Internet’s potential for participatory politics have been replaced by a “gold rush of acquisition” might seem a bit counter-intuitive. Isn’t there still a potential for political organization? What about the Arab Spring and other recent protest movements? Here, a post-Habermasian perspective might offer a more nuanced answer. Fuchs points out that with the arrival of the Internet, capital accumulation and communication have been interrelated in new ways due to the digital labor of social media: “[Its] engaging/connecting/sharing ideology foregrounds and constantly stresses categories of non-instrumental, social, communicative reason […].”9 The social dimension is in fact an instrumental part of capital accumulation itself (e.g. social media posts creating web traffic and in turn publics to offer advertisers).10 This dovetails Fish’s analysis, but also opens up a way to think about the internet as potentially “half a public sphere”—as Mark D. West has suggested.11

With that being said, Fish is systematic and unrelenting in his exposition of incongruent economic policies and the technoliberal elite’s contradictory public statements and actions. There is an endless repetition of the core theses of the book. Facts and quotes are repeated, names and terms reintroduced many times throughout the volume. This thoroughness renders it an excellent scholarly reference book, but less of a compelling ethnographic read. Its strength lies, rather, in the scope of the data it cites; the reiterations of central cases coupled with cogent reasoning about liberal tensions between individualism and collectivism, solidarity and property, provide solid evidence of the kind of technoliberalism that Fish claims is pervasive. It is Fish’s full-bodied program of research that underpins and legitimates his argument’s higher levels of abstraction.

Grounded theorizing at this level is scarce. In this respect, Technoliberalism is a real  accomplishment. With its focus on progressive but failed efforts of facilitating democratic discourse through television and online video, the volume reads as a bleak outlook on the possibilities of—and yet a strong call for—new ways in which media has the potential to engage citizens in participatory culture(s).