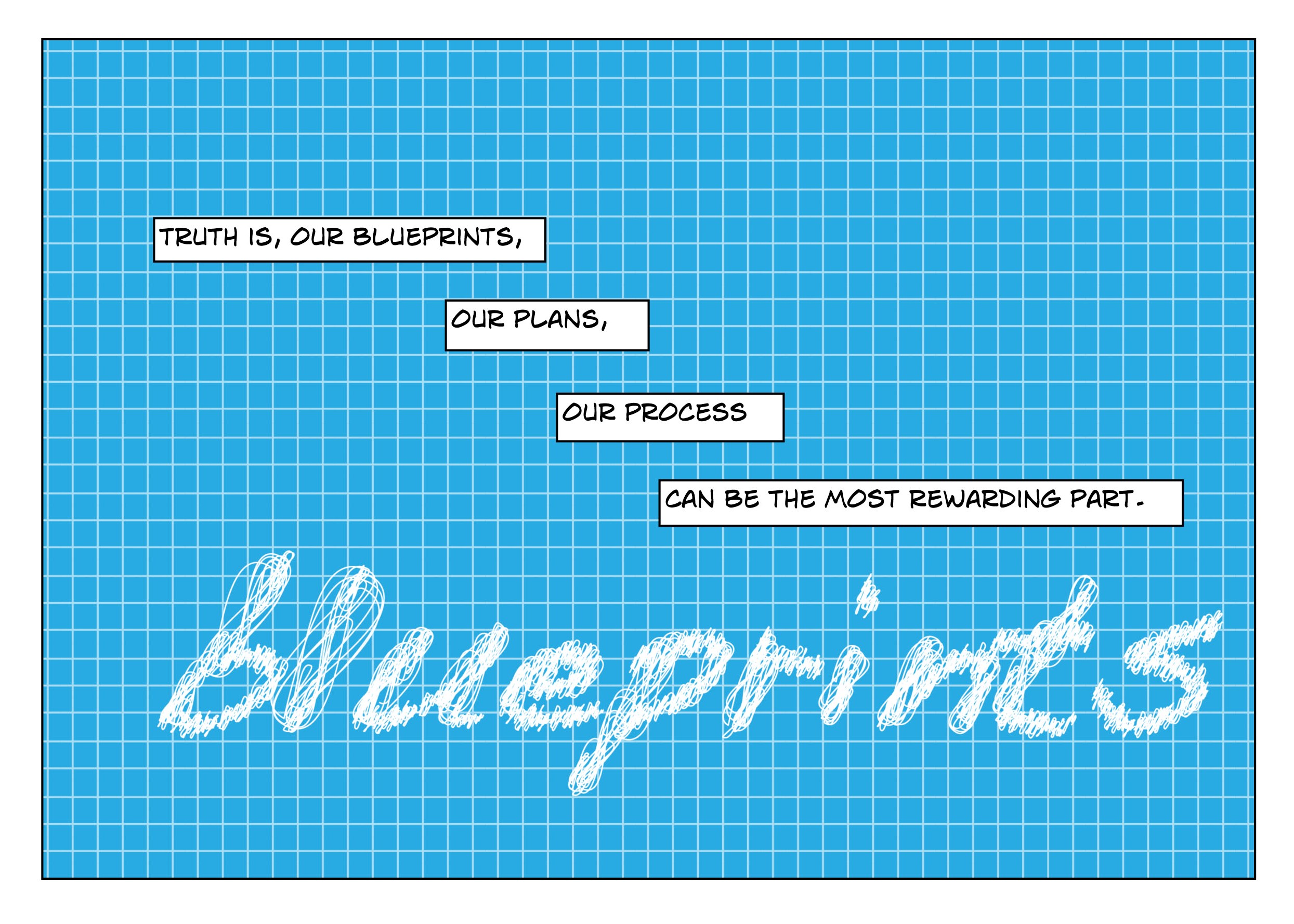 Where do art and academia meet? Can academic writing be artistic? Are academic journals art? Journals like Kairos, Digital Humanities Quarterly, Computers and Composition Online, and InVisible Culture (among others) like to push the boundaries of what is art and what is academia. Some may argue that they don’t push the boundaries of what separates the two so much as showcase how art and academia intersect. These questions drive my work. My current work, the academic-ish comic, “The Blueprint/Product Disparity: Learning from Lofty Plans and Humble Products” only attempts to answer this on a meta-level.

Years ago, I became fascinated with the visual and its effectiveness in presenting data. Work from visual gods like David McCandless and Scott McCloud made me realize how clunky alphabetic text can be in representing ideas. I wanted to write about using comics and infographics as academic mediums. My intention was never to undermine the power of the written word by any means. I worried that using traditional text to promote visuals might seem hypocritical and could potentially offend. So instead of arguing for others to use comics, I decided to create my own.

My approach for producing comics took two forms: my own personal academic-ish comics and comics produced by my students in the classroom. The latter became the focus of my dissertation and academic research; the former became my pet project that calmly waited for an audience. Luckily those audiences appear sometimes (a special call in Digital Humanities Quarterly for comics for example) but not too often. Then one day I found a beautiful call for papers and artwork in InVisible Culture on the topic of blueprints. Since comics are both papers and artwork I found this to be a perfect outlet. Additionally, since my research with students producing comics created so many fascinating themes that I had no room for in my research papers, the topic of blueprints and the disparity between concept and execution was similar to a topic I had been grappling with but had no outlet for.

Part of the challenge of creating these comics is the art. My students constantly questioned their artistic ability. I, too, question mine. Ideally, an artist like Alex Ross, McCloud, Jeff Lemire, Seth, Vitaly S. Alexius, Gabriel Rodriguez, or any other talented comics creator would do the actual drawing—but this would defeat the purpose of my type of comics. The purpose behind my and my student’s work is in the amateur nature of the comics. The rawness that comes from writers doing art and artists doing writing is what creates the intersections that my research attempts to mine. While my comic covers the topic of plans vs. product disparity the overarching question to my research of how academia and art connect is also explored by my artistic choices in producing the comic. The work itself works on a sublevel to the readers showing the disparity between plans and product. If the reader is familiar with professional comics then they’ll experience the disparity between a professional’s art and my own product. This is my goal and exactly what the art piece argues. Hopefully this will continue the conversation of art and academia with readers, scholars, and laypeople alike. 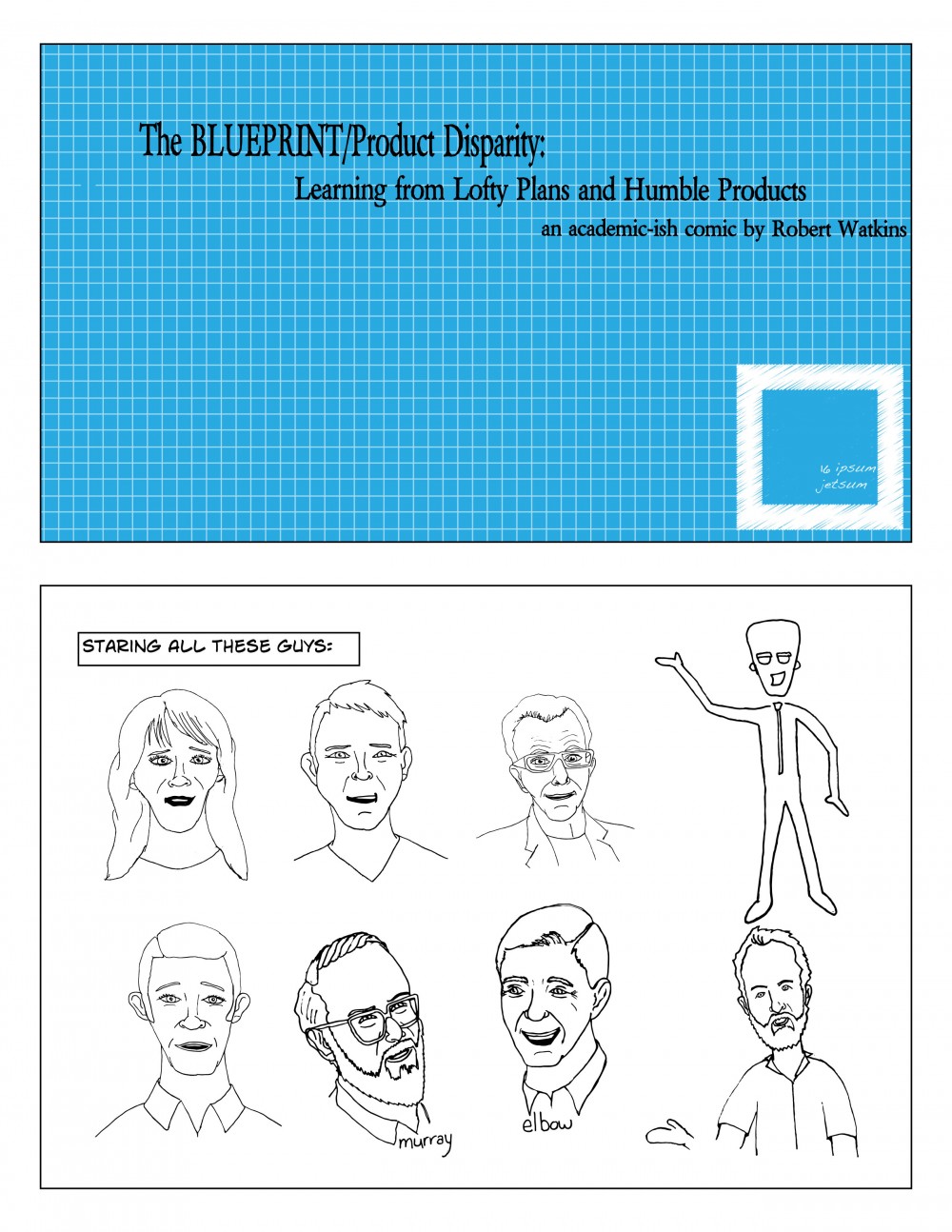 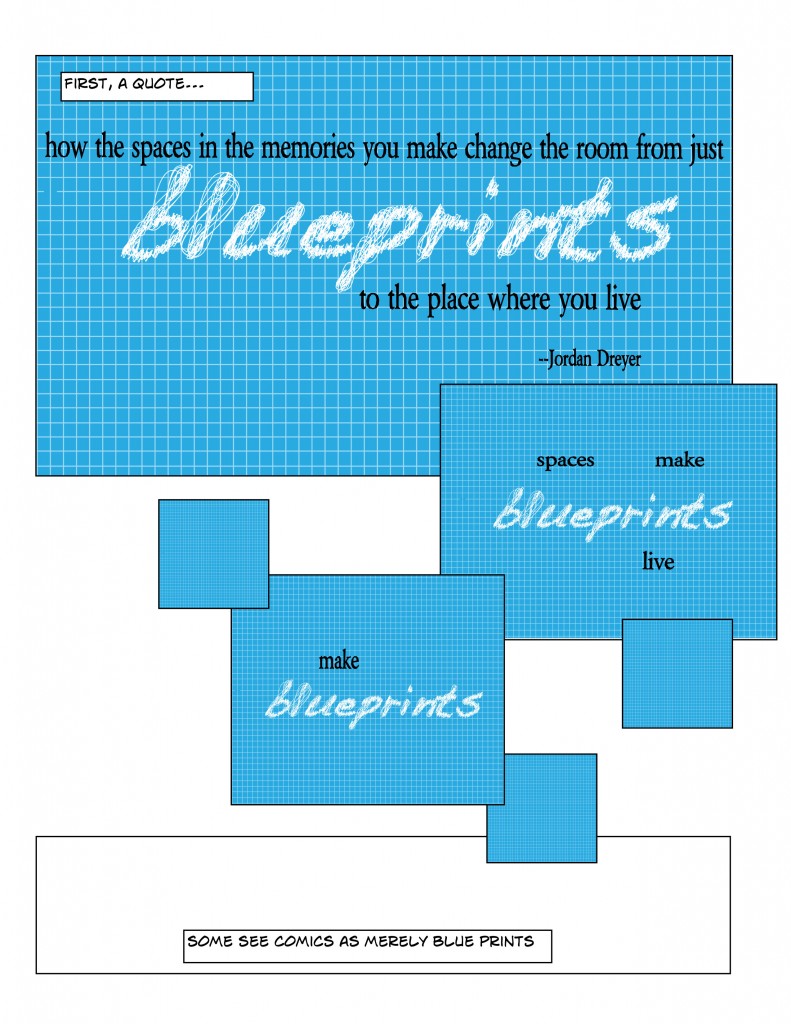 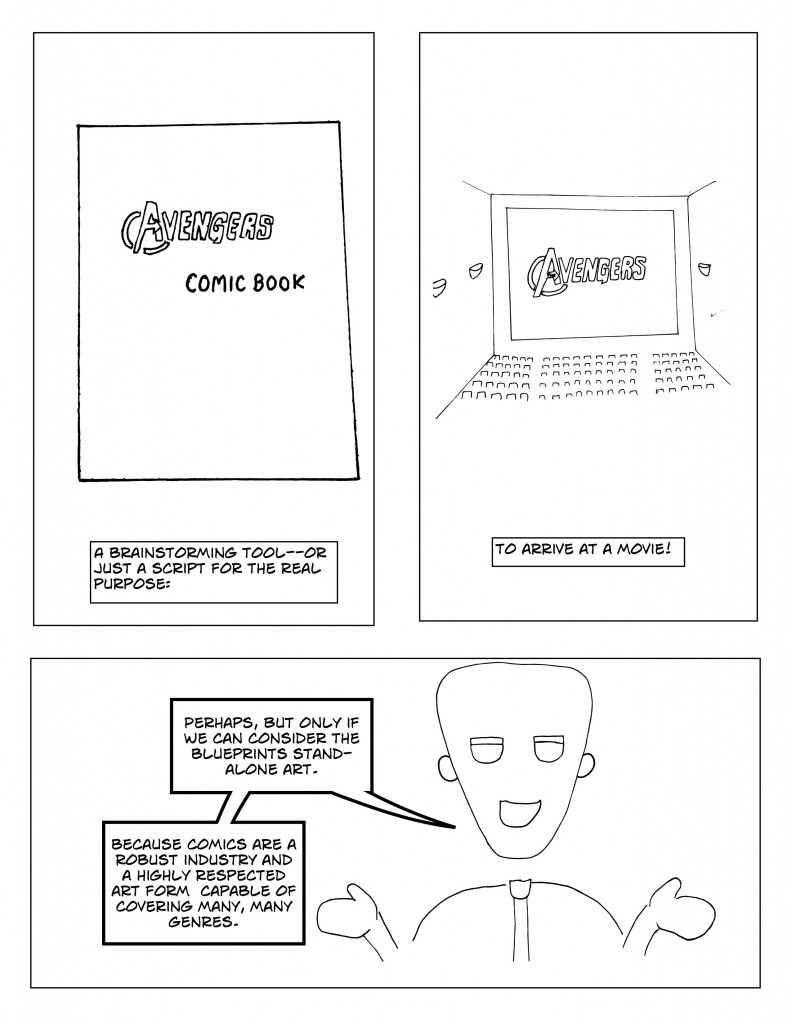 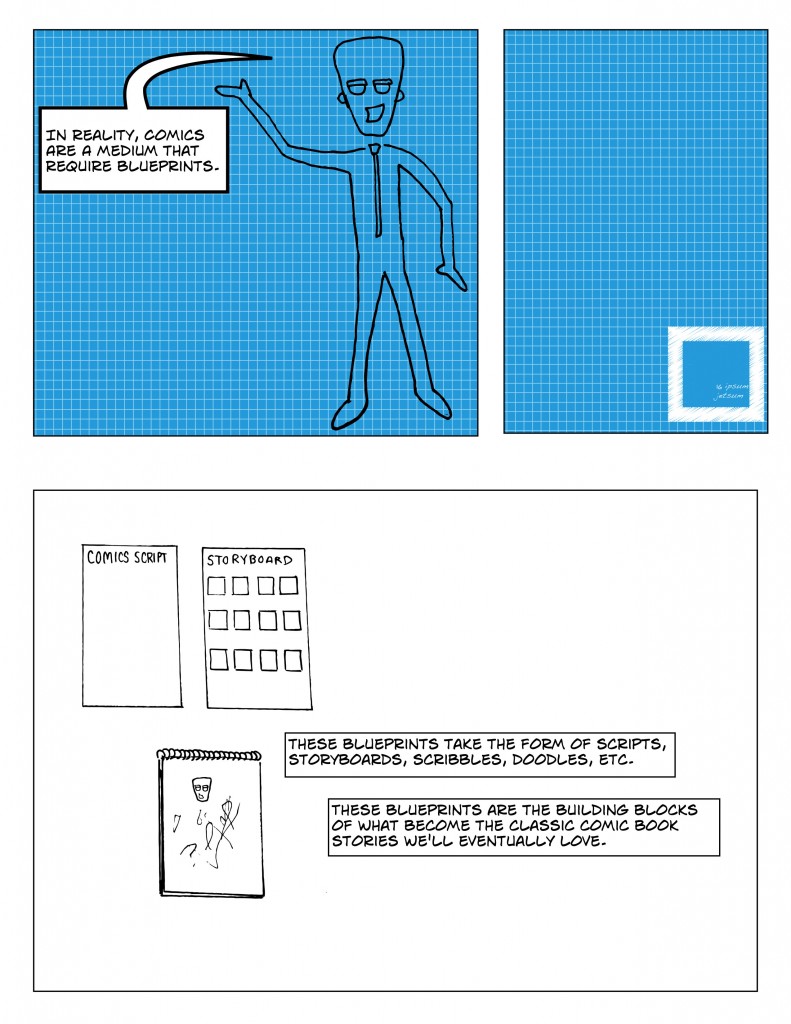 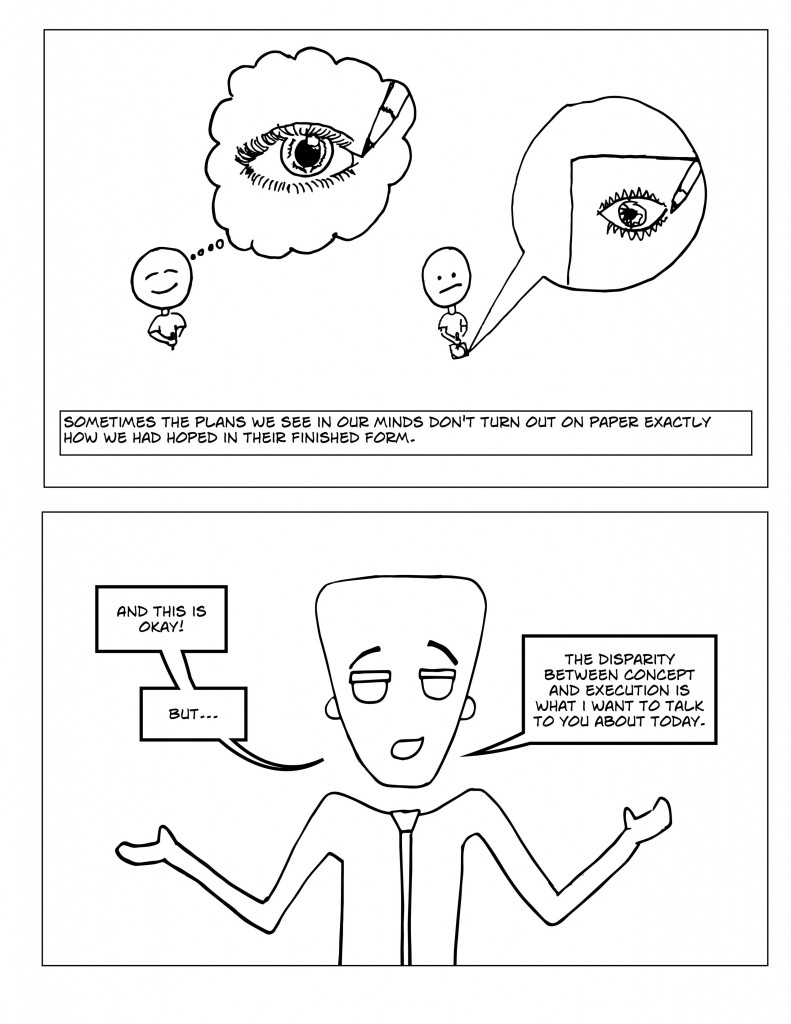 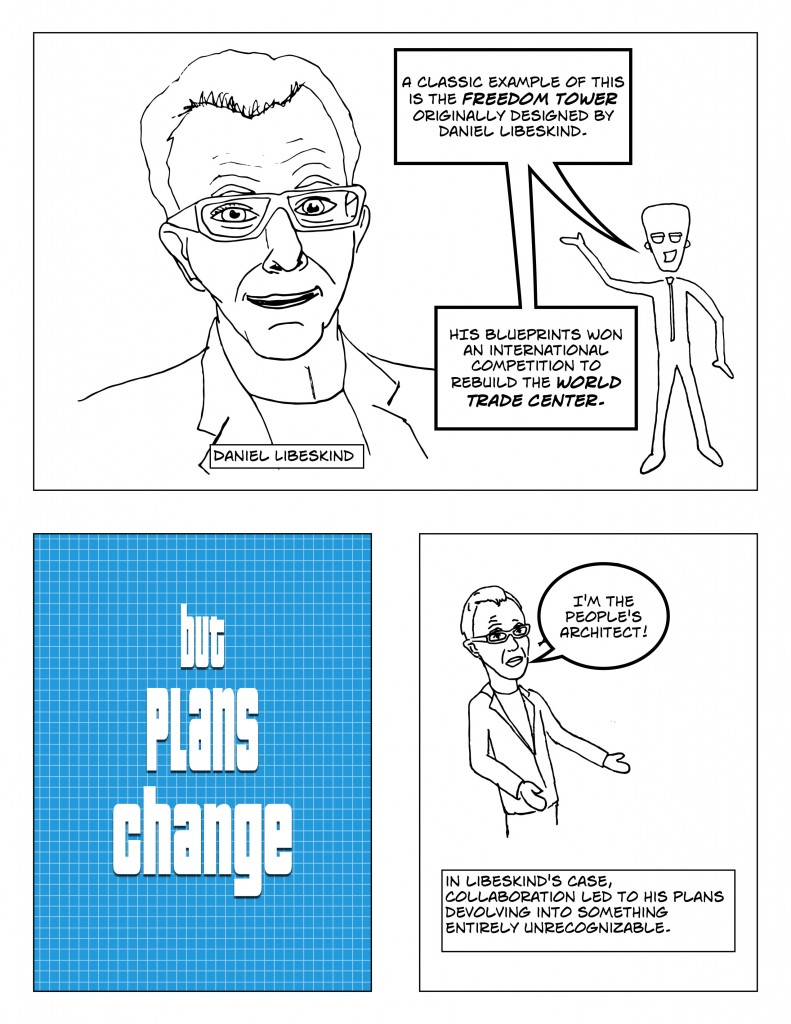 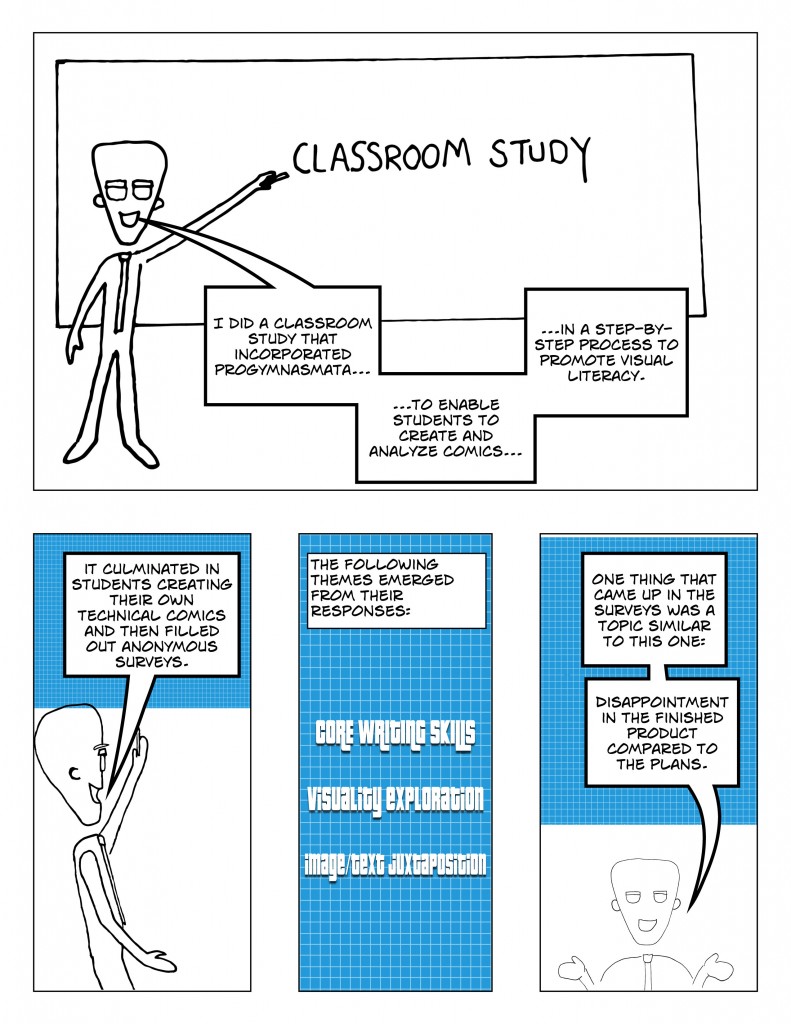 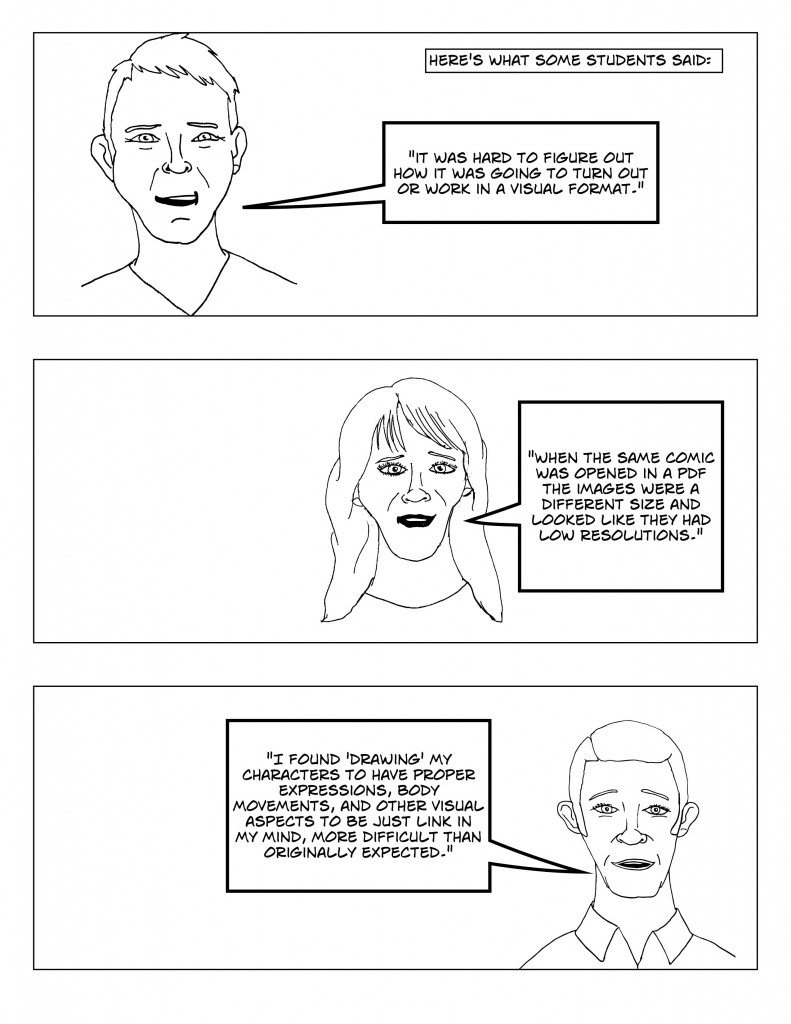 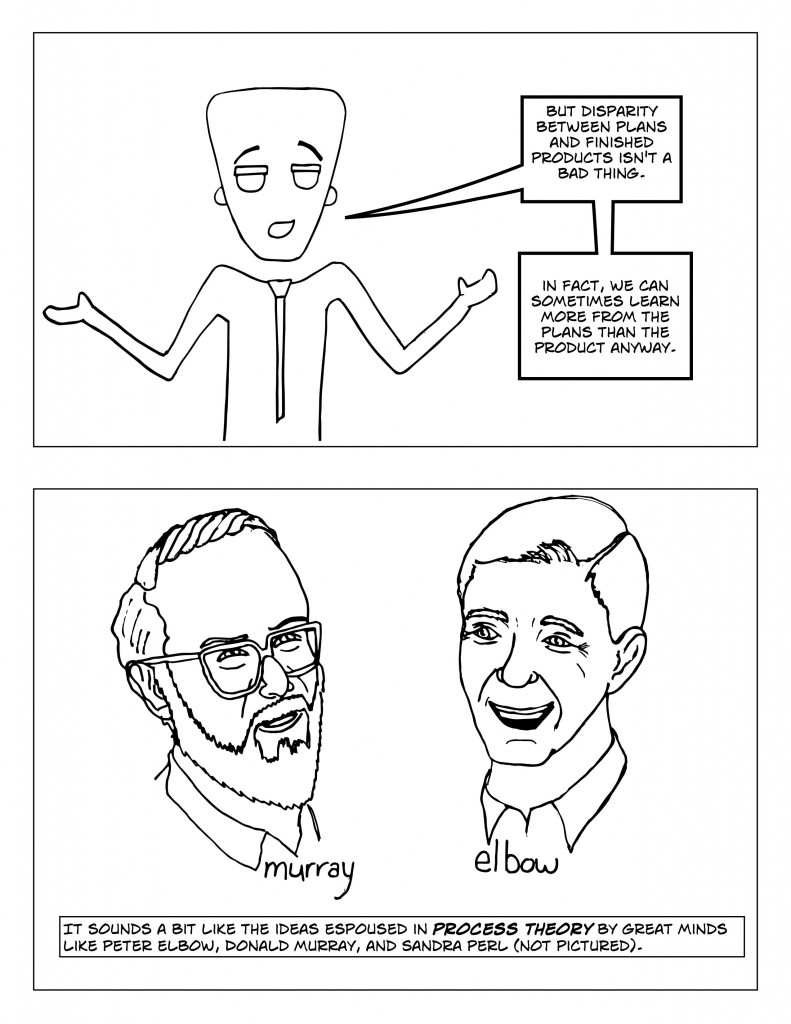 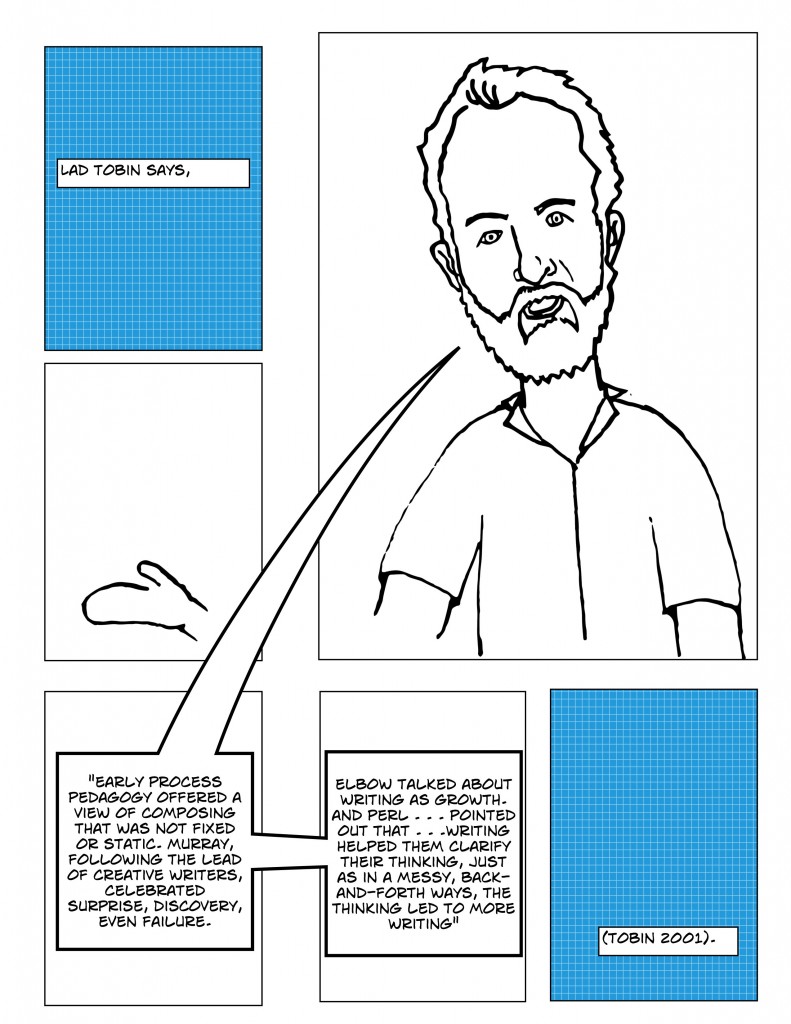 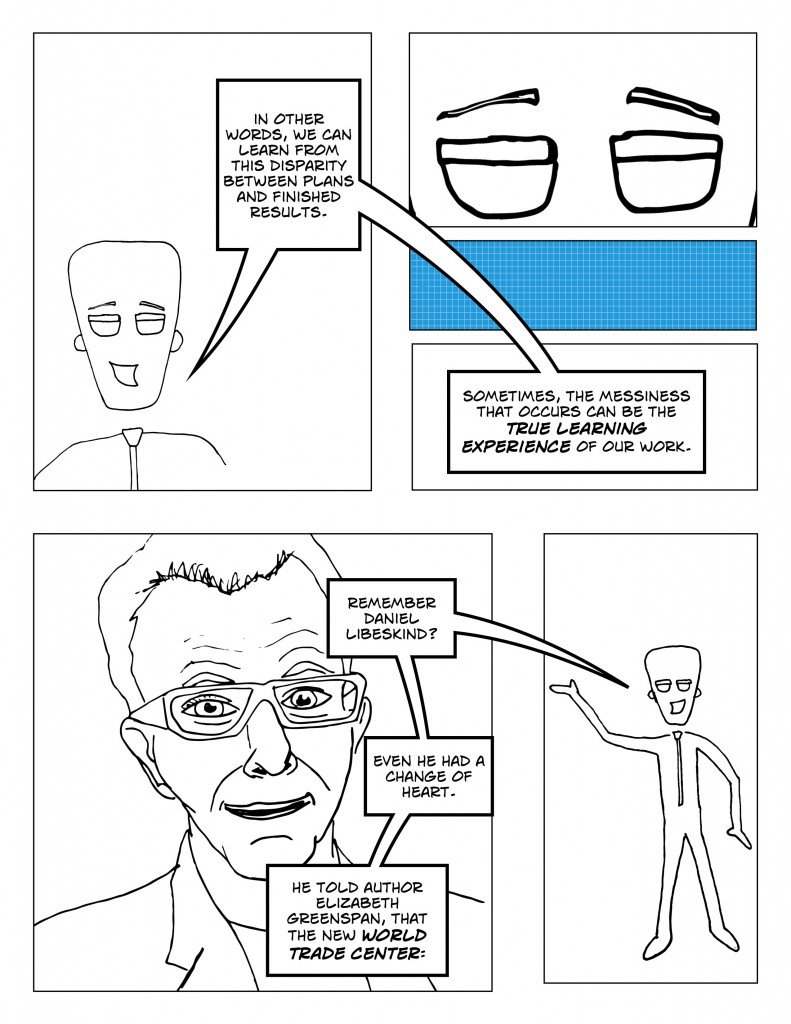 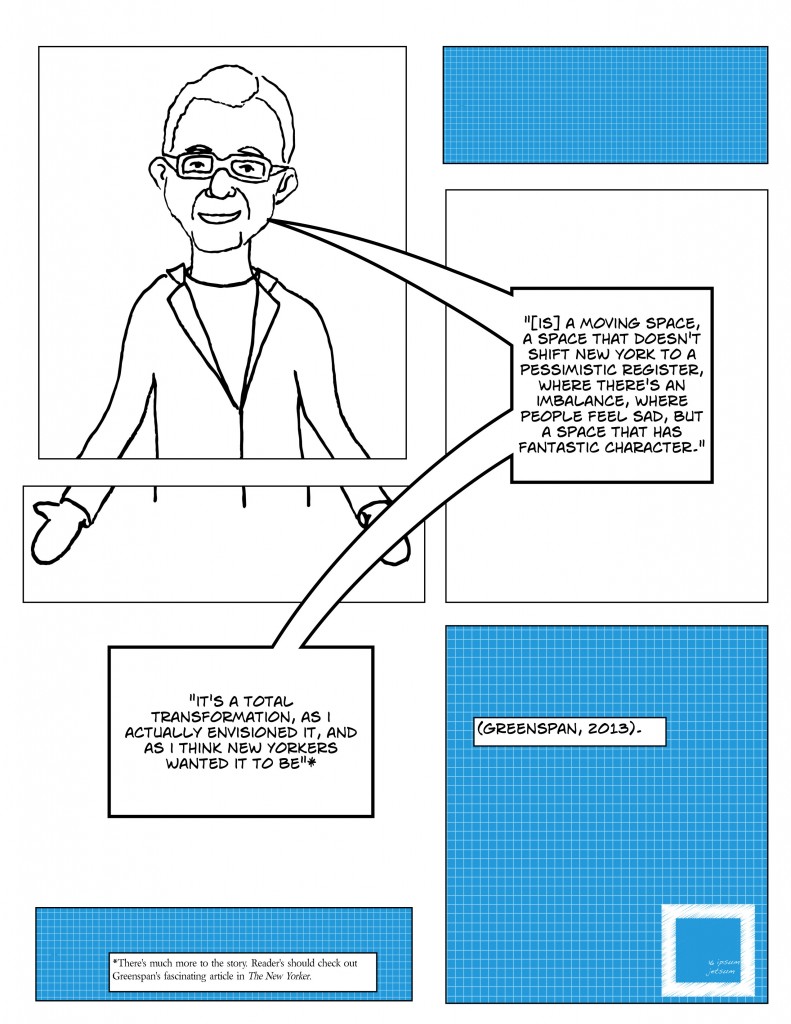 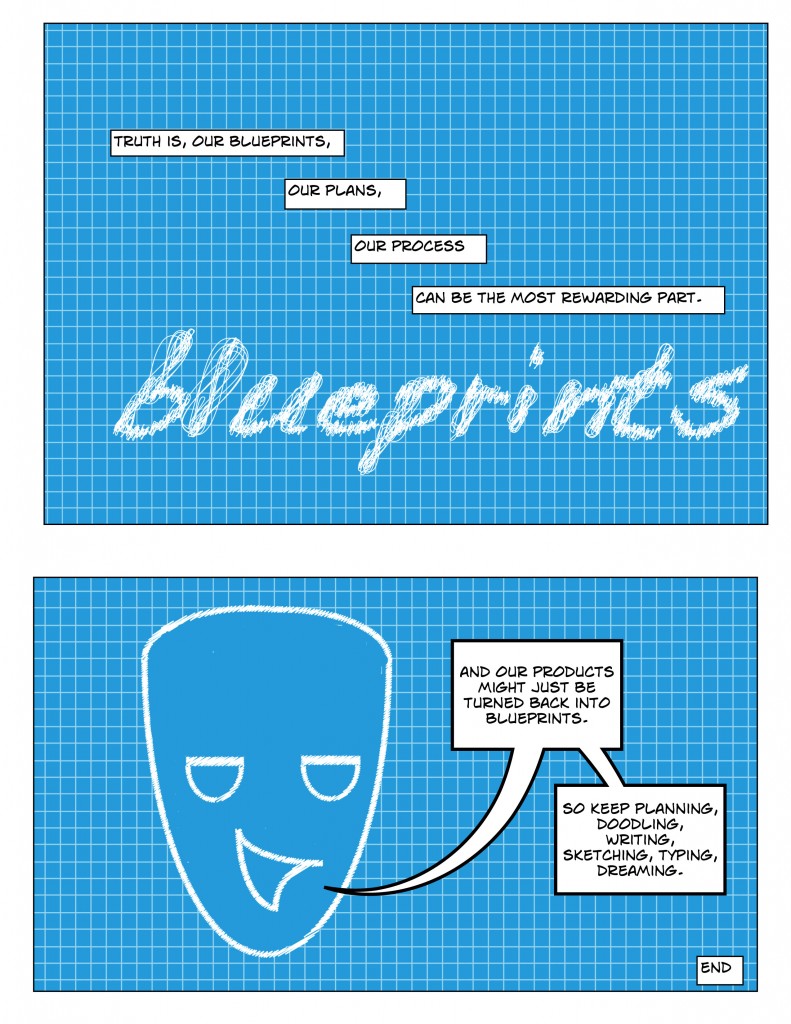 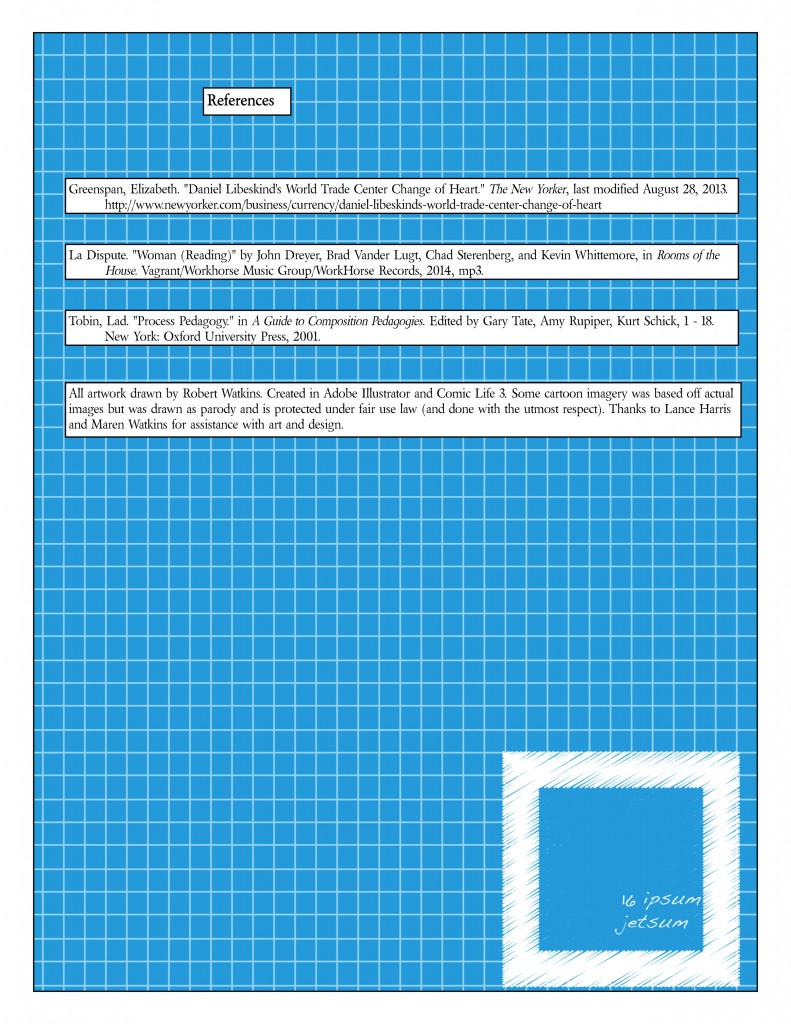