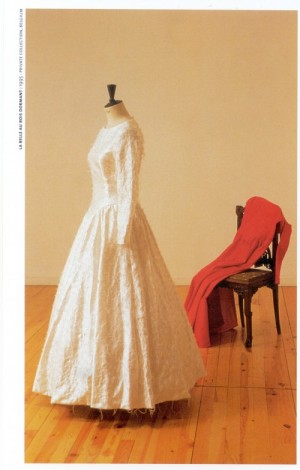 In the home of an unknown Belgian collector, Ghada Amer’s work, La Belle Au Bois Dormant (1995) dances alone. The instillation consists of a white dress, a red dress, a chair, a mannequin and a music box. The red dress is entirely deflated, while the white dress appears starched and up right. The white dress hangs on a headless mannequin that has been rigged to spin in slow circles, constantly rotating the dress. The viewer gets the sense that the dress was made for the mannequin, not for an actual woman. While the red dress is entirely flat and has no sheen, the white dress appears to be glowing. The white dress is made from a heavy-weighted silk and the threads that embroider the dress interrupt the material’s radiance. Although the embroidery on the dress holds the complete text of the children’s fairy tail, The Sleeping Beauty by Charles Perrault, the exposed threads make the letters almost entirely illegible.1

What makes this work so mesmerizing is how Amer transforms these five ordinary objects into a medium for social change. Amer does not just copy Perrault’s text; rather, she re-writes his story, both literally and figuratively. No longer is the fairy tale idealized, fetishized, and thought of as a possible reality for the viewer. Instead Amer exposes the corruption of the characters, the impossibility of the “one true love,” and the loneliness of losing one’s self when a female waits for another individual to fill her. In doing so, Amer warns the viewer against believing in the morals of these fairy tales.

We are all told fairy tales, such as Sleeping Beauty, from such a young age that many girls (and boys) incorrectly believe them to be true. Helene Cixous, a French feminist writer, developed the theory that such fairy tales teach us “…an obsessive love that places the man at the center of the woman’s life, around which she defines herself and without which she is nothing.”2 Amer argues against the idea that one is incomplete without a man or that a woman has to be saved by a man or a “true love.” Rather, she suggests that a woman can lose a part of herself and become hollow, like the mannequin, when trying to construct herself around such empty fairy tales, or around a man. As the story goes, the princess waited for the prince to awaken her and to bring her back to life. The dress waits for the viewer, to interact with it, to place their gaze upon its fabric, thereby confirming its existence and bring it life. This parallel is tremendously discomforting, for unlike an inanimate object, women are meant to have conviction and a sense of one’s self.

Amer has said that she is frustrated that so many of the dictionaries that we refer to daily and consider to be authoritative descriptions of words are, in fact, written by men.3 Reilly writes, “Since men have defined all of the words that are at one’s disposal, [Amer] wonders how can one even conceive of, let alone articulate, an experience outside of that system of masculinist thought.”4 Men have written most fairytales as well. These stories are taught to many young girls as facts, as a sort of rulebook as to how they are supposed to act, not as fantasies. Just as fairytales corrupt the minds of young readers, the embroidery corrupts the purity of the white silk dress.

Although there is no depiction of men in the work, there is still a masculine presence because men wrote both the text that is on the garment, and the music that is played in the background. The text that is written on the dress cannot be read continuously, for the folds in the fabric and the seams that create the dress’s form interrupt it. Similarly, the music that is being played is also perpetually stopped and started. Amer very intentionally seems to be interrupting a masculine discourse by fragmenting words and music created by men.

Women have been scarred by fairytales, just as the white thread scars the smooth silk of the dress. While it would be possible to pull the thread out of the fabric, the fabric would still be left punctured by the needle that embroidered it. And although we can try and move forward, and tell new stories, society as a whole may have great difficulty in fully recovering from the corruption that these fairy tales have engendered. Nonetheless, its important to consider that by leaving the ends of the thread so long and exposed Amer is noting that it is still possible to pull them out and revise the story. The text is not permanently glued on; there is in fact hope. It is only when a women begins to pull at these threads, does she begin to free herself from the confines of the archaic fairytale that binds her.