Firmly ensconced in the middle of the 1960s, the fifth season of Mad Men has begun to reflect some of the “youthquake” that shaped much of our popular perception of this period.  Don and Harry tried to recruit the Rolling Stones for a Heinz campaign, and Don’s birthday party which started the season visualized the culture clash through the wardrobe of the revelers.   Pete and Trudy, whose masterful Charleston had once cleared the dance floor in season 3 (3:3 “My Old Kentucky Home”) at Rodger’s country club party, are no longer the center of the party.  They have been replaced by Megan’s distinctly inter-racial group of friends in their slim slacks, mod prints, boas, and mini-skirts. 1 Pete’s loud madras plaid sport coat speaks to the peacock male trend among young men, but in a distinctly conservative way (new Sterling Cooper Draper Pryce employee Michael Ginsberg embraces the look more fully with his pattern on pattern looks this season).  Trudy’s bright flower mini-dress hints at psychedelia, but its flower print and modest cut make it down right matronly in the wake of Megan’s sex-kitten little black dress. 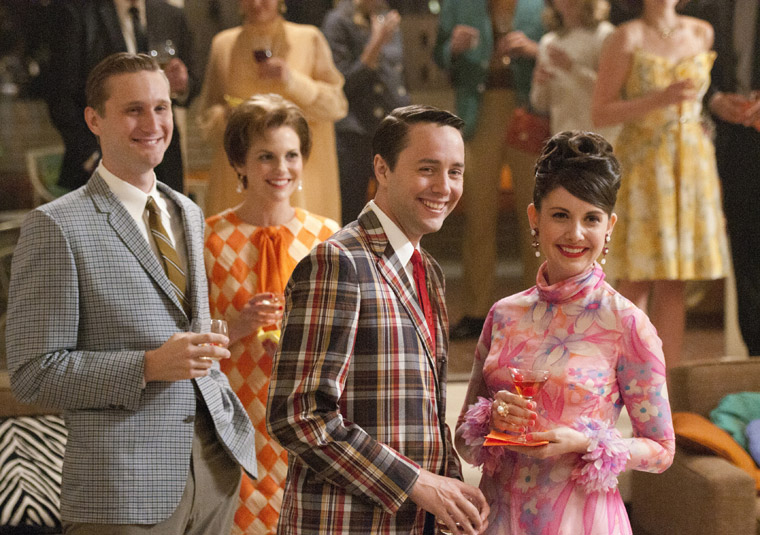 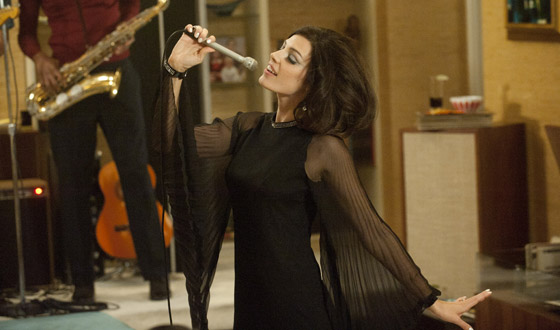 Madras plaids appear to be a recurring trend this season.  Their popularity in the US was renewed in the 1960s, and they were associated with a distinctly preppy, Ivy-League mode of dress.  These plaids have a starring role in the fifth hour of season 5, “Signal 30.” In the episode we see several of the male protagonists grappling with aging in this period which so centered on youth culture.  This confrontation of youth and age, establishment and revolutionaries has been a recurring theme on Mad Men since Don Draper’s affair with the bohemian Midge.  Now as Pete and Trudy fall into family life in the suburbs, and Don is negotiating a marriage with a younger woman the clash of generations rises to the surface again.  Beginning in a high school classroom, this episode finds Pete out of place in his business suit ogling a high school girl in drivers-ed class.  As the scene shifts from the classroom the girl’s flowered flip flops tap out the beat of the leaky faucet in Pete and Trudy’s suburban home.  The flip-flops, with their contemporary resonance, are a potent symbol in this scene for the casual revolution in dressing that is one of the lasting sartorial results of the 1960s counterculture.  By the same token, the faucet in the Campbell home becomes overwrought with meaning as the episode unfolds, representing Pete’s disenchantment with domestic life and his sense of powerlessness at the office extending into his home (even in Pete’s own home, Don Draper is cleaning up after him). 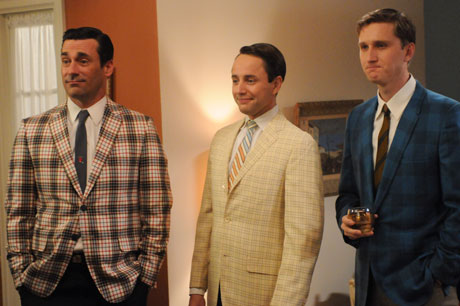 The most striking fashion moment in the episode, comes not from the women, but from them men.  Trudy has managed to rope Don and Megan into a dinner party at their home in the Greenwich suburb of Cos Cob.  Don is dreading this dinner, telling Megan: “Saturday night in the suburbs, that when you really want to blow your brains out.”  Megan on the other hand recasts the evening as an outing to the country, asking Don, “Why don’t you wear the sport coat I got you?  It’s the country!”  When the couple arrives it seems that Megan’s instincts were correct, both Pete and Ken have donned sport coats for the evening as well, standing in front of Pete’s new credenza stereo the trio are a symphony in plaid—Pete in crème, Ken in turquoise, and Don is a loud grey, red, and white.  The preppy style of these sport coats suggests an uncomfortable quality to the casualness of the evening, particularly for Don, since the coat is such an extreme departure for his from his classic style.  Costumer Janie Bryant designed the jacket first, before the episode was written, inspiring Matt Weiner to construct a storyline around the idea that Megan had bought the garment for Don.2   It suggests the kind of life Megan envisions for the two, and the changes Don appears to be trying to make this season.  Later on in the episode, for example, Don sits on the sidelines as his colleges indulge in the pleasure of a brothel while entertaining a potential client—an enormous departure for Don.

The madras plaid is also used to delineate the space of the “country”/suburb in the episode, an idea which is echoed in several aspects of the episode, including Don’s suicidal quip.  Lane Pryce, an English transplant to New York is also at the center of this episode.  At the opening of the episode his wife Rebecca takes him to a Pub to watch the England Germany World Cup match.  Though in his wife’s words, “He’s in the midst of a messy divorce with Great Britain,” Lane cannot help but be swept up in the patriotic swell as England beats the “Jerrys.”  Rebecca and Lane meet Edwin Baker, an executive for Jaguar, and his wife at the pub and the British couples bond over the allure of America.  Rebecca notes that in London, “The boys look like girls, and the girls they don’t seem to be concerned with manners.”   Mrs. Baker explains that she likes New York, “because fifty miles away things are infinitely more wholesome.”  Their conversation reflects the mid-1960s image of “Swinging London,” which by April 1966 had made it to the cover of Time magazine. 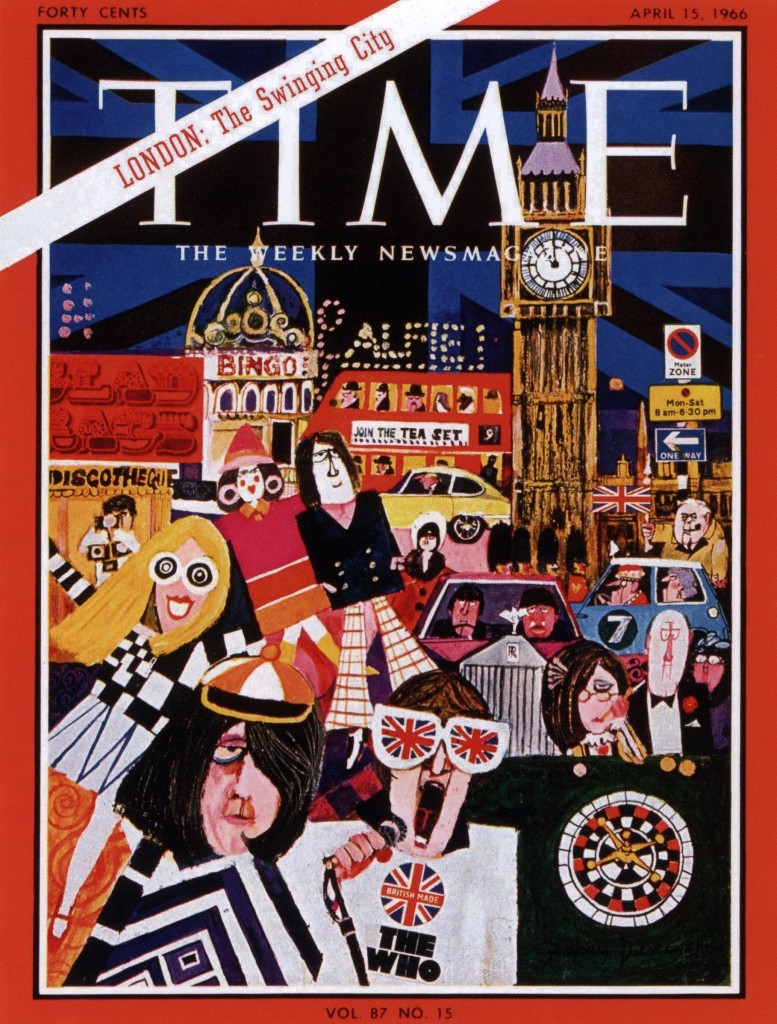 Mrs. Baker’s bucolic dream of a farm outside of New York City is at least rhetorically realized in Pete and Trudy’s house in the “country.”  Cynthia, Ken’s wife, says the of the home, “its almost rustic.  Am I wrong?”  The plaid sport coats worn by Ken, Don, and Pete are also a visual reference to English country style.  Though clearly in a louder more American color pallet, the madras plaid coats mimic English country tweeds.  This American vision of the country, with its rustic wood paneling and flower curtains, like the casualness of the sport coats themselves, is a simulacra.  When Trudy urges Ken and Cynthia to leave Queens and join her in the country, Ken replies, “I grew up in rural Vermont.  Kids throwing their bikes on the front lawn is not the country to me.”  Cos Cob is definitively a suburb, not the country.  The affected ritual of donning “country” clothes for the trip simply underlines the falseness of the imitation, as Pete jokes, Cos Cob “sounds a lot like the Algonquin word for briefcase.” 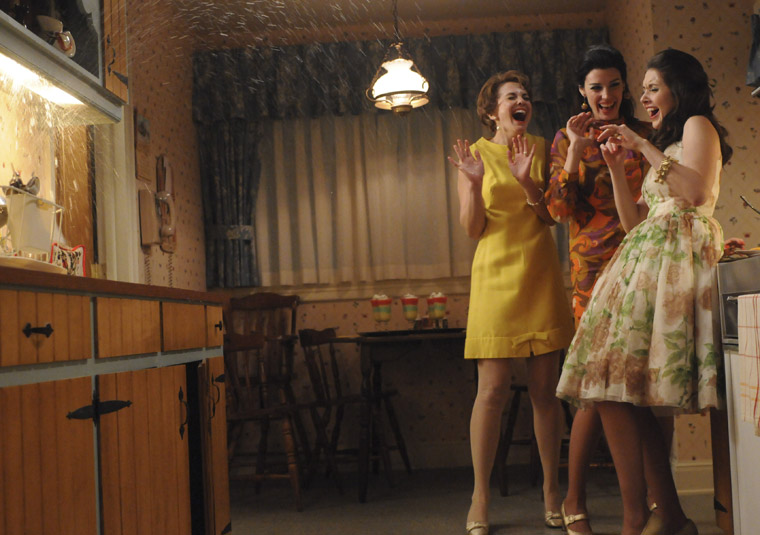 This is the suburb that Don left when he and Betty divorced, at the same moment that Pete and Trudy left the city for family life in Cos Cob.  As Pete’s home literally explodes when the sink valve gives way, we see the stark contrast between Trudy as a happy homemaker and the modern working girls Cynthia and Megan.  In a soft flowered dress with a classic 1950’s cinched waist and full skirt, Trudy stands in stark contrast to Cynthia in an yellow a-line dress reminiscent of Mary Quant’s mod styles, and Megan’s bright psychedelic print sheath.  This image of the suburb, communicated through the nostalgia of Trudy’s clothes, and the rhetoric of the country is key to the way that Pete unravels throughout the episode.  Though Pete’s life seems to have unfolded the way he had hoped, he’s a new father and he’s taking on more responsibility at the office, he ends the episode telling Don, “I have nothing.”  The visual images and rhetoric of the “country” suburb underline the emptiness that Pete feels in his life.  Pete’s desperation inspires Ken to write a story about a man named Cos living in the country, “it was killing him with its silence and loneliness, making everything ordinary too beautiful to bear.”

Victoria received her PhD from the University of Rochester in Visual and Cultural Studies, and she is currently teaching at the Maryland Institute College of Art.  Her research examines fashion in the context of art, politics, gender, and race.