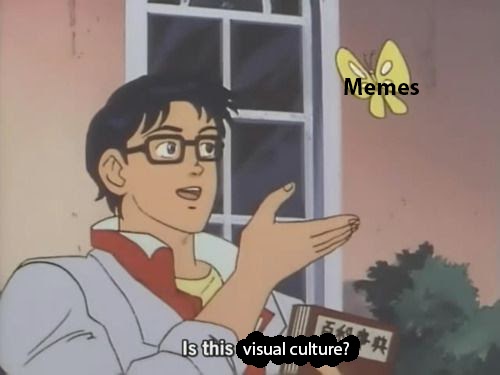 For our 34th issue, Invisible Culture seeks scholarly articles and creative works that approach internet memes as aesthetic, cultural, and political objects of study. Memes have been discussed largely in their communicative and participatory capacities, particularly in the fields of communications, political science, and other social sciences. There are fewer examples of humanistic work approaching memes and memetics as world-building practices and as cultural objects that foreground meaningful sense-making. The last major journal issue devoted to the topic was a 2014 special issue of The Journal of Visual Culture.1 Memes have since moved from diversion to discourse, from formally simplistic to kaleidoscopically complex, from niche to mainstream.

Memes draw endlessly from the ever-growing dustbin of popular visual culture, returning modified images that are, in turn, instantly modifiable. Memes are as much, if not more, a part of most people’s daily cultural exposure as television, film, or radio. Savvy creators of “legacy” media anticipate memification (one need only think of Lil Nas X sliding down the stripper pole to Hell) and marketing professionals “in on the joke” leverage the authorless form for free advertising.

The bulk of anglophone meme research since 2015 has focused on the role of memes in the spread of extremist ideologies as a means of “[weaponizing] irony to attract and radicalize potential supporters, challenge progressive ideologies and institutions, redpill normies, and create a toxic counterpublic.”2 This attention is both necessary and appropriate. However, we hope to address memetics more broadly and to emphasize areas that haven’t received the same attention. Memes are hardly unique to any one age group, race, class, or indeed any region of the world; nor are they exclusively in the domain of humor.

Memes spread and develop online and can never be fully untethered from the exigencies of platform, algorithm, location, and law. Yet vernacular meme cultures are as varied as the panoply of human experience. Memes move across and within ethnic and national identifications, expressions of gender and sexuality, political ideology, and language family. In this issue we seek work that speaks to that capacious view of memes, from part to elusive whole; whether focusing on the deeply contextual particularities of a specific meme or community, the subversive or revolutionary potential of particular imagery, discussing the practice of meme artists or reckoning with memetics as a worldwide phenomenon. We hope for submissions of scholarly and creative work across disciplines, methodologies, communities, and positionalities.

Contributions to this issue may address (but are by no means limited to) the following topics and themes:

Please send completed papers (with references following the guidelines from the
Chicago Manual of Style) of between 4,000 and 10,000 words to
invisible.culture@ur.rochester.edu by June 30 July 15, 2021. Inquiries should be sent to the
same address.

Creative/Artistic Works
In addition to written materials, InVisible Culture is accepting works in other media (video, photography, drawing, code) that reflect upon the theme as it is outlined above. Please submit creative or artistic works along with an artist statement of no more than two pages to invisible.culture@ur.rochester.edu. For questions or more details concerning acceptable formats, go to http://ivc.lib.rochester.edu/contribute or contact the same address.

Reviews
InVisible Culture is also currently seeking submissions for book, exhibition, and film reviews (600-1,000 words). For this issue we particularly encourage authors to submit reviews of games or other forms of interactive media. To submit a review proposal, go to http://ivc.lib.rochester.edu/contribute or contact invisible.culture@ur.rochester.edu.

Dialogues
The journal also invites submissions to its Dialogues page, which will accommodate more immediate responses to the topic of the current issue. For further details, please contact us at invisible.culture@ur.rochester.edu with the subject heading “Dialogues submission.”

*InVisible Culture: An Electronic Journal for Visual Culture (IVC) is a student-run interdisciplinary journal published online twice a year in an open access format. Through peer reviewed articles, creative works, and reviews of books, films, and exhibitions, our issues explore changing themes in visual culture. Fostering a global and current dialog across fields, IVC investigates the power and limits of vision.