Perhaps the greatest delight in teaching is watching students realize that debates are often not what they initially appear. I relished this transition in particular this fall, when my freshman working on an argumentative paper about the future of journalism began (mercifully) to drift from her original question—echoing the panicked buzz of so many alarmist headlines—“is print dead?” towards the infinitely more sophisticated “what does it mean to digest journalism digitally and how does this readership mode both continue and differ from others?” Inspired by the impending election, she asked her classmates during a draft review clinic whether she might discuss how election coverage played out online through social media—moving beyond the articles on news outlets themselves to address the ways topic circulated via Facebook walls and even enjoyed a second life as memes.

The class seized enthusiastically on this question and began referencing images they had seen “reporting” the campaigns’ myriad gaffs and malapropisms. Everyone giggled when I pulled up one of my personal favorites from the recent presidential debate entitled One Meme to Rule them All. (see above) There was laughter but not a word of interpretation or commentary—it seemed unnecessary, we all got it. “Seriously,” I asked my students “how could anyone one year ago—let alone ten or a hundred years ago—see this and understand what the hell they were looking at?” Reasonably, they laughed and shrugged.  Collectively, we gave the student permission to pursue such materials in her paper, agreeing, however, that part of her challenge would be to explain this form of visual communication.

My student’s challenge had already been on my mind for some time before it came up in class. It might have started earlier in the semester when I contemplated (and still intend to try) introducing such visual memes as tools for teaching argument analysis. I’m sure many recall their Facebook walls in October sagging under the aggravating weight of images like this one, just ripe for the dissecting table: 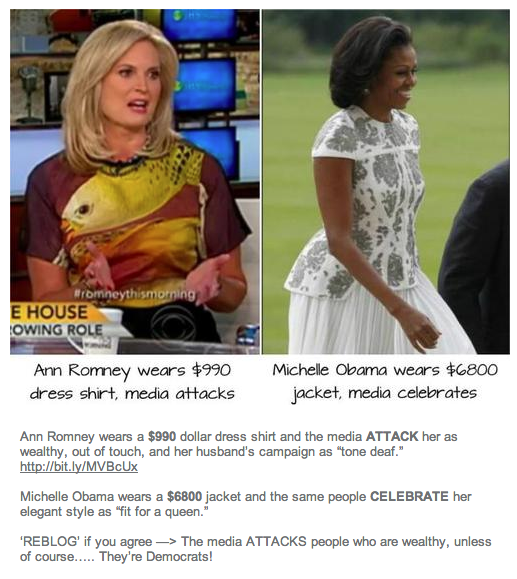 This kind of text-image hybrid felt not only more ubiquitous but increasingly freighted as well. Sensing myself no longer in the land of LOLcats, I’ve yearned to know my surroundings. This sort of thing isn’t an advertisement, it isn’t a work of art, it isn’t exactly a cartoon; perhaps it is a kind of message relay system, a call to action, a joke or even simply the evocation of a mood? It is a picture—made with words and sometimes made of words. The fact that my students and I could all name and respond to it, yet none of us was prepared to answer the simple question: “Ok really, what is this thing?” calls to mind W.J.T. Mitchell’s assertion that “we still do not know exactly what pictures are…and what is to be done with or about them.”1 Perhaps we have been pulling up alongside another signpost in Mitchell’s hailed “pictorial turn”—the shift from language and ideas towards images as the dominant containers and modes of meaning-making. The fifteen years separating Mitchell’s inauguration of this turn and the conundrum in my classroom signal that this is hardly a sharp swerve and more on the order of a slow arc. As such, language of ruptures, revolts, traumas and epistemic breaks proves painfully inadequate for understanding it. Instead, we need tools of a decidedly more organic, protracted nature—and nature itself gives us just that.

Richard Dawkins’ 1976 classic of evolutionary biology, The Selfish Gene, takes an interesting turn of its own near the end. The bulk of the book is dedicated to enumerating and unpacking the proclivities and talents of an essential biological unit: the gene. In essence,  “survival machines,” genes are aggregates of prolific molecules with the ability to reproduce themselves and to whose remarkable industry we owe the staggering variety of life on earth. By colorfully reducing all life forms to mere stewards and purveyors of chemical DNA, Dawkins managed to raise the hackles of religious fundamentalists and liberal academics alike. A sustained analysis of his theories is not really on the docket here, however. My stake in the book is where Dawkins backs up from the hard sciences, stepping one foot outside the ring entirely.

Towards closing, Dawkins admits the fraught relationship that is our genetic self-awareness. In acknowledging the grindingly slow battle for genetic supremacy underlying, well, everything, we gain a powerful language for understanding change, but one that is not exactly calibrated to the rate of change we witness and perceive in our lifetimes. As Kate Distin observes in The Selfish Meme “There is no reason to believe that the human brain of one or even two thousand years ago was dissimilar to ours; yet there is an enormous disparity between modern culture and that of previous millennia.”2 How can we help but puzzle obsessively over what has changed and what separates us, cognitively—even neurologically—from our predecessors?

Knowledge about genetics thus bestows a weird apple as its legacy. Things do change, and change in a way that resembles genetic evolution and yet is not genetic evolution—unless Dawkin’s story is, by his own admission, not yet fully written. The ever-crafty gene, it turns out, has been asserting new iterations and expressions of itself, mimicking and expanding its chemical precedents into arenas outside the strictly biological. This means we can take a cue from genetics when looking beyond cells, proteins, and even bodies, applying genetic thinking, in some manner, to the objects of culture and cultural production. “For more than three thousand million years, DNA has been the only replicator worth talking about in the world but it does not necessarily hold the monopoly rights for all time.” In fact, writes Dawkins, “A new kind of replicator has recently emerged on this planet…we need a name for it, a noun that conveys the idea of a unit of cultural transmission or a unit of imitation.”3 Dawkins then begs forgiveness from his “classicist friends” for shortening the Greek “mimeme” to “meme” in order to rhyme (and conceptually cinch) it with “gene.” Etymologically, a “meme” is the child (so to speak) of genetics and mimeses: replication through both fidelity and variation. Coming of age in recent years, I’m feeling as though the term invites a bit more inquiry than we’ve been giving it thus far.

The sort of things Dawkins identified as memes still appear in the term’s Wikipedia entry: a catchy tune, an advertisement—cultural phenomena broadly construed. The term meme, however, did not appear in parlance (even at the level of discourse) until the mid-90s, presumably thanks to the accelerating Internet and its bearing on rates and modes of transmission.  Given this cultural confirmation, it is difficult to separate the “meme” from its sub-category, “Internet meme” and the confusion is worth attending to. Indeed, we already had language for talking about the things Dawkins lists above: we understand them as trends, fads, hits—in short, the products of popular culture. A visit to sites like knowyourmeme.com, or cheeseburger.com however, reveals something very different from a sprawling index of general popular culture arcana. These meme databases contain and track items that have predominantly transpired and transmitted over the Internet–replicating and proliferating under certain environmental conditions. Digging through the annals of these sites, caught somewhere inside the Rosetta stone and the weird interiority of Tron, one cannot help but wonder: “honestly, what does all this shit mean?” 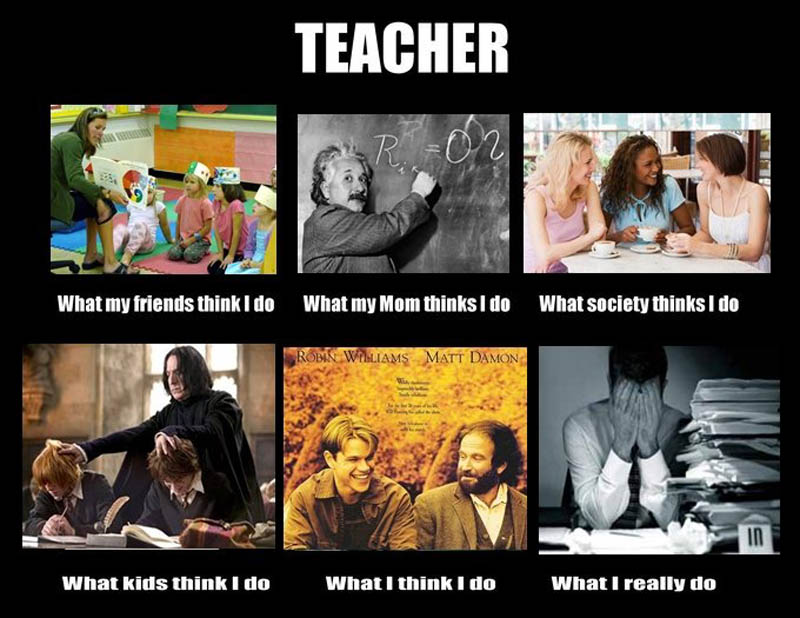 What makes these “memes” so expansive is that unlike the “chain email” or the dance-step, phenomena that simply disseminate, the things we are coming to understand as memes do not proliferate in a static form. Rather, mutation is built into their very transmission.  Dawkins notes that the successful meme stabilizes as it transmits. An efficient way it can manage to do this is by being adaptable, malleable, expandable. The relationship between text and image in the more profligate instantiations is therefore consistent enough to anchor meaning but fungible enough to accommodate expansion of meaning as well. Perusing iterations of the infinitely re-interpretable “What people think I do” meme or the “Condescending Willie Wonka” meme (very popular in spring and fall of 2012 respectively), we can get a sense of the elastic authorship that enables these word/picture images to populate psycho-social and temporal space on the internet.  “We tend to regard erratic copying as a bad thing,” Dawkins notes “but it is ultimately (mis-copyings) that make evolution possible.”4 Every idiotic re-expression of the meme is a gesture to its reification as well. 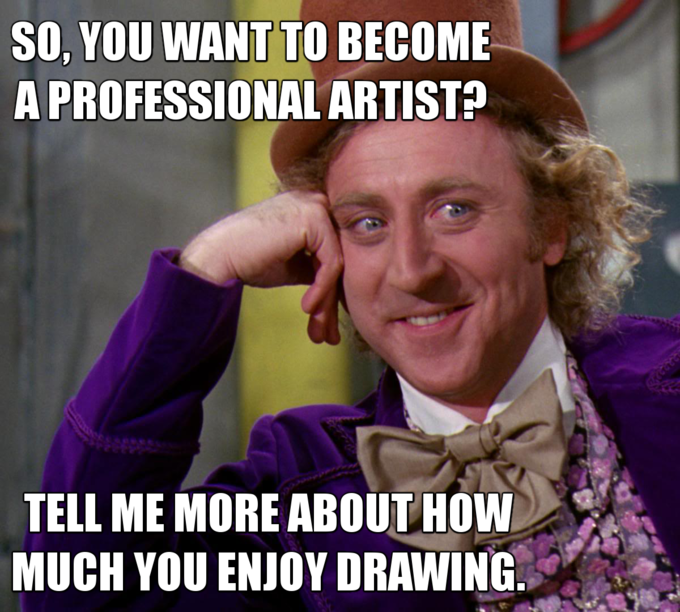 So You Want to Become a Professional Artist? (Condescending Willy Wonka)

To be absolutely clear: it is not my assertion that these text and image couplings constitute the totality of memes, only that they make a good case study of my larger suggestion: that a meme is not simply that which travels through culture with “fecundity” (another Dawkinsian meme characteristic) but whose bounty is reliant on the built-in expectation for variation and change along the way. Many items on various “Top Memes of 2012” lists take a time-based video format (just wade into the fray of youtuber productions of PSY’s “Gangnam Style” or Gotye’s “Somebody that I used to Know” for a sampling), which requires a more significant investment of time and effort to replicate. Contributing to the swelling text/image oceanscape is considerably easier, especially when entire sites (memegenerator.com, quickmeme.com) exist to facilitate the rapid (re)production process. No longer the purview of the Photoshop proficient alone, even decidedly un-tech savvy folk like the author herself can play along. Behold: a specimen of the “First World Problems” meme I made myself during writing this very piece: 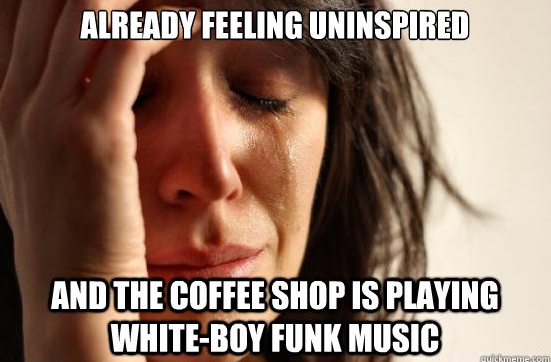 What have I authored here? What have I said and to whom? Finally, why did I bother and will we continue to do so? Given that 2012 has been simultaneously heralded and lamented  both“The Year of the Meme”  and “The Year the “Meme” Meme Died,” I’ll just suggest that we’re only beginning to puzzle out the answers.

Abby Glogower is a PhD student in the Program in Visual and Cultural Studies at The University of Rochester. The author wishes to thank her student, Sarah Teitelman, whose ideas initiated this discussion.