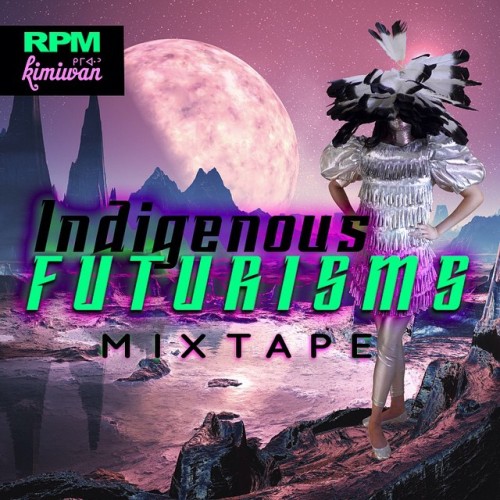 A mix tape opens with a NASA countdown. It transitions to the words of John Mohawk, journalist, negotiator in regional and global conflicts, and Indigenous activist of the Seneca Turtle Reserve. The beats that follow are ambient, rhythmic, and transient; each fragment of a song, speech or manifesto morphs into the next without abating. Collaboratively produced between RPM and kimiwan zine, the mix tape, titled “Indigenous Futurisms,” is a forty-six minute journey through a forward-oriented, though cyclical, temporality. With an electronic backbone composed of otherworldly sounds (including artists such as A Tribe Called Red, Kelela, Silver Jackson, and Erikah Badu, to name only a few), the experimental compilation is one component paired with a zine addressing “the intertwined Afro-Indigenous histories of colonized life on our current planet that reach for decolonial worlds beyond the beyond.”1

In the opening minutes of the mix tape, a female voice (Elizabeth La Pensée) takes an ecocritical stance, initiating this conversation on “the beyond” with a series of potential fates:

La Pensée’s words demonstrate Ecocriticism’s importance within Indigenous futurism, in this instance, a toppling of modernity’s most destructive forces.2 As their moniker reveals, the creators of the mix tape and zine are also indebted to Afrofuturism, a movement (if it can be called one) named by Mark Dery in his 1994 essay “Black to the Future.” Embodied by contemporary musicians such as Janelle Monáe, a self-described android, the “cultural catchphrase” has come to characterize “the world of tomorrow today in music, art, theater, politics and academics.”3

Marshaled by Black thinkers in speculative fiction (Octavia Butler and Samuel R. Delaney, to name two), Afrofuturism signals twentieth-century technoculture at the same time that it gestures toward a dark colonial past, constantly bubbling up in the present in nefarious modes of racism, as well as the imagination of possible futures. The emergence of this imaginary has always been intertextual, a crosscut of science fiction writing, graffiti, performance, television and music. It’s not surprising that a mix tape crediting Afrofuturists was released in tandem with the zine, given how musicians such as George Clinton and Sun Ra (featured in the compilation) as well as the genre of hip hop itself—an alchemy of records, turn tables, synthesizers and samplers produced in the Black and Latino neighborhoods of New York in the 70s and 80s—helped in forging this new technological imaginary.4

According to Indigenous epistemologies, technology is similar to a shape shifter, as Stephen Loft writes: the “shapeshifter (not unlike the Trickster himself) [is] neither inherently benign nor malevolent, but always acting and active, changing transformative, giving effect to and affecting the world.”5 This is important given how technology is often viewed in binaries. In pop culture representations, we have seen technology as harbinger of a dystopian future. Likewise, it has also heralded visionary prospects of better living. The creators of “Indigenous Futurisms” embrace technology in all its instantiations, from the galactic machinations presented in the compilation to game design, Indigenous speculative fiction writing, artistic production, and the potential for space travel, whether imaginative or cosmological. Significantly, the understanding that technology is essential to contemporary Indigenous constructions of selfhood contrasts longstanding notions of Native peoples as artifacts of a bygone past. Here, the logic of modernity, a teleological orientation that leaves colonized Others behind, is not viable. Time is no longer or simply forward-moving. The present is understood through the prism of the past and future.

This brings to mind the Afrofuturist Project’s description of Afrofuturism: “Whether you call it mythology, ghost stories, cosmology, parable, folktale, sci-fi, religious tale, or fantasy, people of color have always contemplated their origins in the same breath that they anticipated the fate of humankind.”6 Wendy Red Star’s “Medicine Red Child” (from the series Thunder Up Above), featured on the cover of the zine and mix tape, makes this point clear as it shows a woman dressed in metallic silver with a feather headdress covering her face, set against the pink terrain of another world. 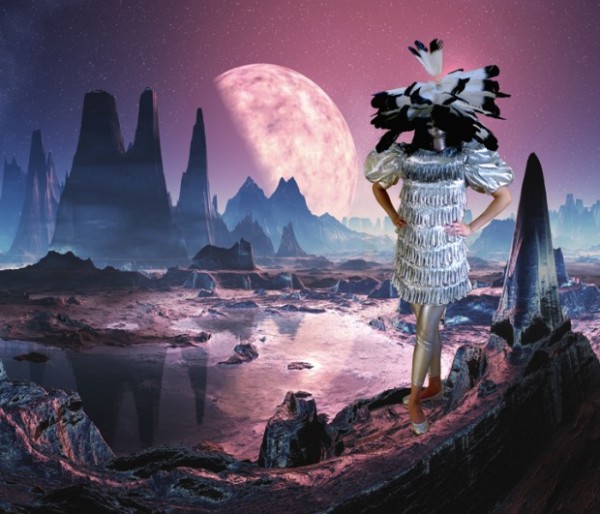 The entire series features multiple similarly styled figures (the costumes cite Victorian clothing and 70s silhouettes to re-envision Pow wow garb), or as Red Red Star (Crow) describes them, “fierce ambiguous beings.” In the images, they are the “First People (Natives) on the Final Frontier,” as she writes. The description of the “Indigenous Futurisms” project follows this line of thought, evoking the final frontier from pop culture representations as one opening into Indigenous voyages through space:

Where the supposed ‘finality’ of Star Trek’s frontier meets the remixed linguistic flip of Navajo Star Wars, and where the sounds of comet landings and galactic space dust meet the 6th World encoded in Indigenous exploration of night-lit skies and interplanetary, opaque spaces, our people have always been moving.

Pictured against an unfamiliar and strangely beautiful landscape of towering rock faces, Red Star’s costumed galactic travelers evoke past histories of the New World, current conversations around “illegal aliens,” and Indigenous cosmologies.7 Countering essentializing notions of home and place, the photo series proffers another perspective: that home, neither fixed nor static, might be the cosmos itself.8