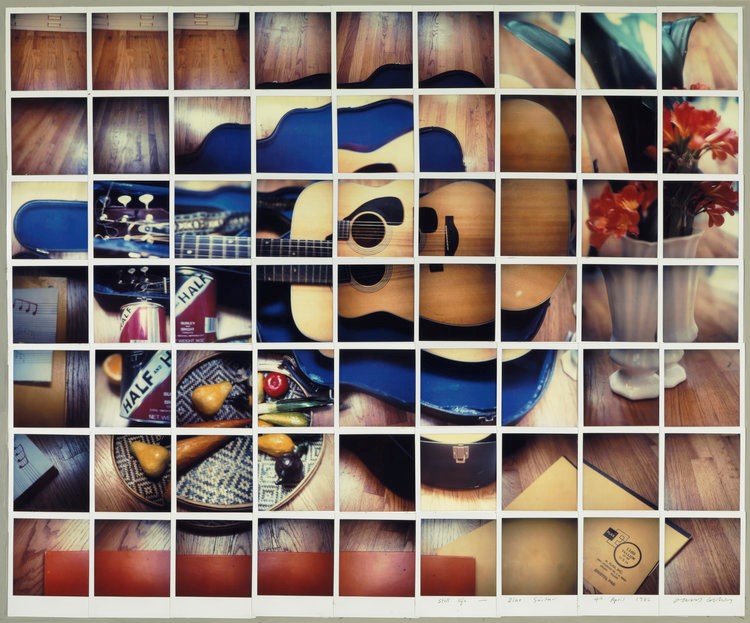 It seems entirely appropriate for a celebration of David Hockney’s eightieth birthday to take place in Los Angeles. The party is being held at the Getty Center with a small exhibition of self-portraits and photographic compositions. The Getty is, of course, one of the world’s preeminent photography institutions, and Hockney’s work sits comfortably among the center’s milieu. Hockney’s self-created mythos, which he carefully constructs through his drawn and painted self-portraits, revolves entirely around Southern California. Despite other parties being held for him around the world, this location is ideal.

Anyone familiar with Hockney’s work will not be surprised to see that elements of domestic life in Southern California recur throughout the exhibition. One expects to find swimming pools, lounge chairs, and outdoor decks in Hockney’s art, but it is important to consider how these examples (which are mostly culled from the 1980s) differ from his earlier pieces. The British artist’s work from the 1960s has become synonymous with stereotypes about the Golden State: sexy, colorful, and superficial. Hockney’s early California paintings boldly combine these stereotypes with modernist elements, playing with the technique of predecessors like Picasso and Matisse, and the style of his Pop contemporaries such as Dubuffet, Warhol, and Lichtenstein. In addition to his experimentation with surface, depth, and form, work from this decade is novel for its queering of modernist style with explicit depictions of homoeroticism. When we look at these early paintings, we don’t see an artist simply departing from a strict separation between figuration and abstraction—we see him do so whilst depicting sexy boys in colorful backyards who are doing superficial things like sunbathing. 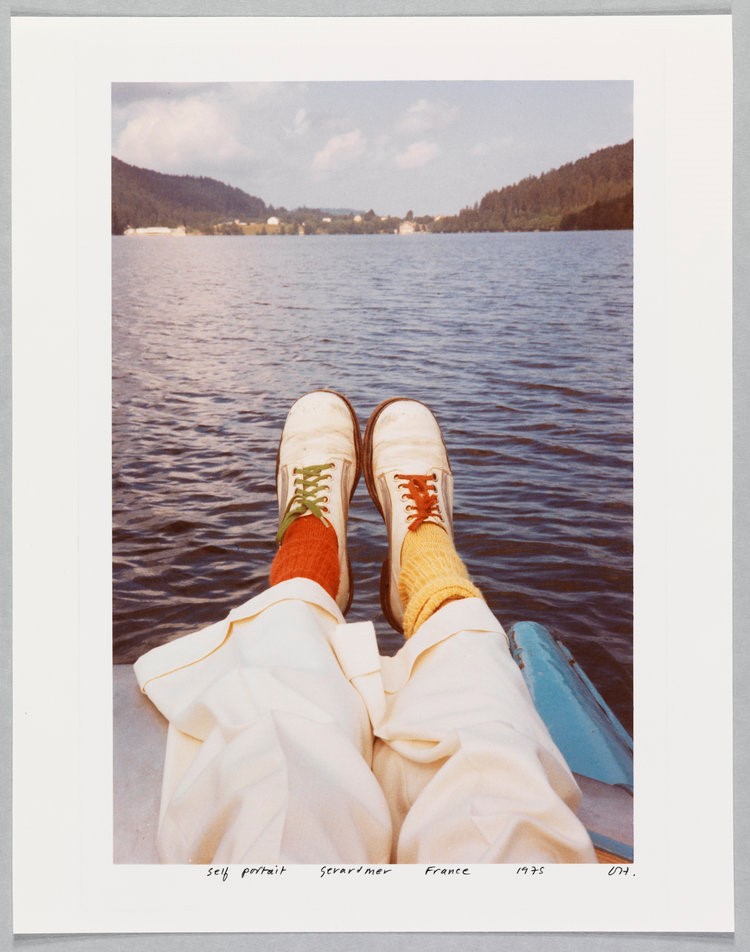 Viewers will only find hints of Hockney’s superb paintings in the two small galleries that compose Happy Birthday, Mr. Hockney. One obvious reason for this is that his traveling retrospective, which exhibits his early masterworks, is currently at the Pompidou Centre in Paris until October 23. The Getty’s modest exhibition displays a brief survey of the artist’s career, but startlingly not a single object from his California breakthrough. In those earlier paintings, Hockney formal experiments playfully depict the queer and glamorous inhabitants of Southern California and the places they may or may not actually inhabit. We should not, of course, expect Hockney to repeat his paintings from the 60s, but it is difficult to move through the exhibition without recalling that decade’s exemplary work. Regardless of this inevitable drawback, Hockney’s birthday party offers a few exquisite moments that demonstrate the artist’s continued experimentation with medium and form.

The two rooms, which are divided into self-portraits and photographic works, provide various examples of Hockney’s playful use of style and medium across six decades. The self-portraits take viewers from an art school drawing in 1954 up to four of his iPad images from 2012. Displayed in chronological order, we are offered glimpses into Hockney’s perception of himself with drawings, lithographs, photographs, prints, and paintings. A few of these are from the artist’s personal collection, which means that partygoers are offered a personal treat from the birthday boy himself. Self-Portrait, Gerardmer, France (1975), for example, is Hockney in all his frivolity: a photograph of his legs and feet extended towards a lake on a sunny day. The accompanying description for this photograph notes that this self-portrait is recognizable as such due to the artist’s mismatched socks and shoelaces. This emphasis on clothing and style is worth considering because it reveals how iconography functions throughout the room. Stripes figure prominently, which demonstrates Hockney’s skill with line and his strength as a draughtsman. For instance, the lithograph self-portrait from 1954 shows a seventeen-year-old Hockney sitting with his arms crossed in pinstripe pants and a striped tie in front of a striped yellow wall. Across from this early work is a print from 1986 that features a photocopy of Hockney’s red and white striped shirt with a geometrical rendering of his face. And of course, most of the work features Hockney’s trademark thick black glasses. Given the emphasis on the iconography associated with the artist’s personal habitus, it is perhaps unsurprising that the best work in the room frames these objects directly for the viewer. Self-Portrait (1984/1986) features five oil paintings that highlight Hockney’s signature style: relaxed trousers, a red and white striped shirt, blonde hair, and large glasses. If the earlier photograph from France suggests a narcissism associated with fame and recognition, this later example directly addresses how clothing and accessories help form the image of the wearer. This ability to recognize and mirror his audience’s perception of him becomes more interesting when he takes up more daring formal experiments. This culminates most saliently in his four iPad self-portraits from 2012. Large, bright, and colorful, these images initially appear to be superficially Hockney–that is to say, all style and no content. However, as with most of the artist’s work, there is more than meets the eye on the surface. These images are described as drawings, but they also look like paintings. And they also remind us of a printed photograph. They are, perhaps, all three—something unique to the iPad as medium. With the iPad, Hockney trades his brush for a stylus. While the image in its digital form could be displayed on Hockney’s iPad itself, the printed image is striking in the way it is not digital. Ultimately, this collection of self-portraits is a strong demonstration of Hockney’s practice. Although we are only offered bits and pieces of what makes his well-known paintings great, we are given enough to marvel at his ability to reinvent his subject: himself. 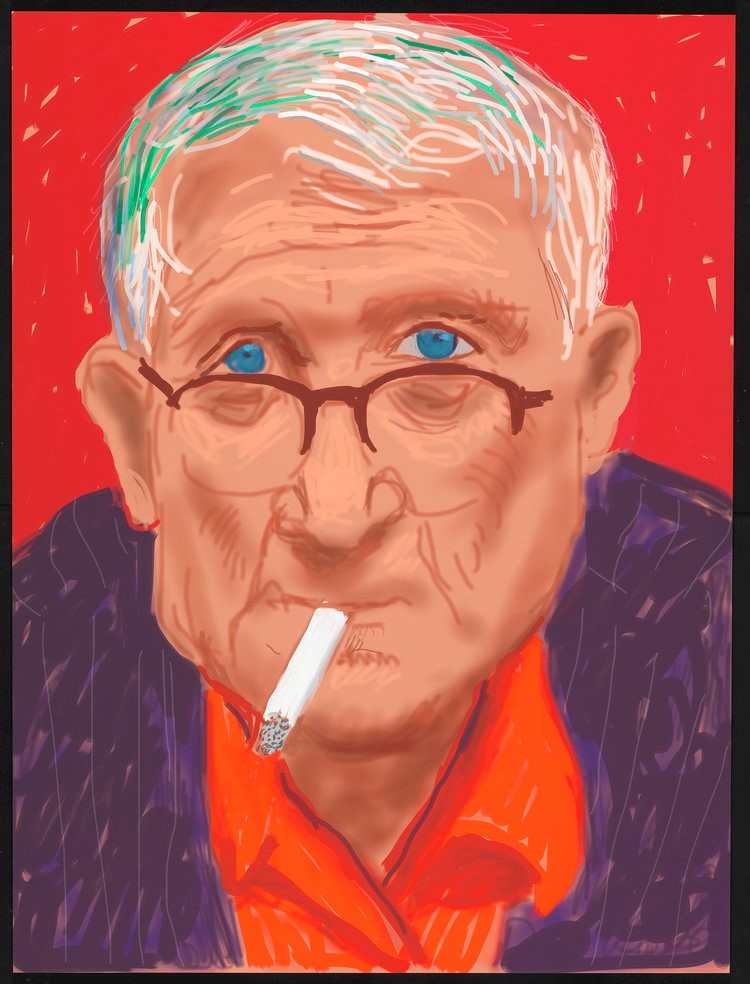 Upon entering the second room of Happy Birthday, Mr. Hockney, the question quickly arises as to whether it was a mistake to begin the exhibition with the drawn self-portrait from 1954 in the other gallery. This novice drawing was used for the lithograph that hangs beside it, which explains why the artist overlaid a grid on himself. However, the viewer becomes aware in the photography gallery just how much this figure of modernism haunts Hockney. Nine of the thirteen photographic works on display in this room are grids: polaroid composites of Hockney’s home, swimming pool, and friends, taken from different angles and assembled together. The Polaroid’s iconic square shape easily elides into a grid structure when such works are grouped, and the artist plays with our ability to conceptualize the different parts as a unified image bound by the intersecting lines. The grids that render Hockney’s home and pool, for example, allow us to see these spaces captured from various angles and arranged in a manner that emphasizes the uniform flatness of the Polaroid image. This recalls the early cubism of Picasso and Braque, whose breakthroughs in cubism also experimented with the tensions between space, depth, and flatness in their depictions of guitars, tables, people, and more. Unfortunately, their influence dominates the exhibit. If, as Rosalind Krauss argues, artists perpetually “rediscover” the grid, one could also say that some modern artists perpetually rediscover Picasso. 1

Here, Hockney brazenly handles both the grid and Picasso, two exemplary figures of modernism, leaving little to be gained. Still Life Blue Guitar April 1982 (1982) is a grid that assembles sixty-three polaroid squares into the disorienting image described in the title. This, of course, is a direct engagement with Picasso’s themes and style, which is plainly stated by the accompanying text that reproduces one of his cubist guitars. It also points to an earlier work titled Self-Portrait with Blue Guitar from 1977. This self-portrait, which is not in the Getty exhibit, shows Hockney surrounded by various figures and abstractions as he paints a blue guitar. Among these surrounding objects is a sculpture by Picasso. Another arrangement, Nicholas Wilder Studying Picasso. Los Angeles 24th March 1982 (1982), features the art dealer reading a book about the artist. We might wish to say that these works are engaging with cubism by demonstrating what a contemporary cubism using photography looks like, but that would be an error on our part. To offer a generous reading like that would ignore the breakthroughs of Dadaist photomontage, for example.

Hockney is not interested in revolutionizing cubism—he is interested in cubism as it originally developed. Like Picasso and others’ analytic cubism, Hockney’s grids construct their subjects through multiple views and flatness. However, his “cubism” features too many instances of perfect alignment and easy recognition, which ignores the semiotic discoveries of the early 20th century he quotes. If the polaroid composites are fun to look at but artistically uninteresting, the four photo collages only somewhat makeup for this loss. Composed of hundreds of photographs cut and arranged into collages, these works can be understood as Hockney’s move from “analytic cubism” to “synthetic cubism.” However, if Picasso and Braque dismantled spatial signification with synthetic cubism, Hockney reassembles it. Like a completed jigsaw puzzle, Paint Trolley, L.A. 1985 (1985) shows Hockney’s ability to assemble hundreds of parts into a beautiful whole. The image is captivating, but as we scan the pieces that make up the trolley, we are struck with the return of Picasso. This time, it is once again in the form of a book—perhaps the book Hockney referred to while modeling his “cubist” pieces. These collages are, as many gallery visitors have commented, cool. Perhaps they are cool because we can recognize the effort of cutting and pasting hundreds of photographs to create an image. Or maybe the grids are cool because they remind us of an aestheticized Instagram page. Cool is an appropriate adjective to describe Hockney and his art, but one cannot help but wonder what is so “cool” about reviving the breakthroughs from the beginning of the 20th century some years before its conclusion.  If we consider postmodernism’s prominence at the time Hockney created most of these works, the problem becomes apparent: the artist had not yet resolved his own challenges with modernism. This explains why the composites and collages are dominated by Picasso, who serves for Hockney as the modern figure he cannot overcome. 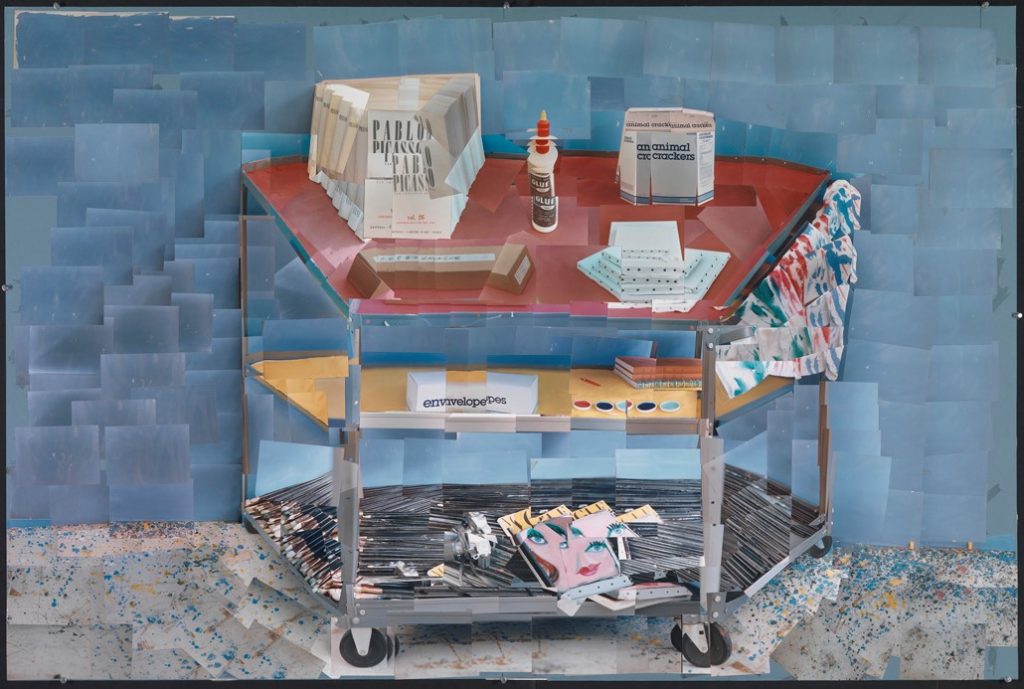 Like any birthday party, there are bound to be exciting moments, boring moments, and others that you may or may not forget. When you look back on the party, you might think to yourself, “Well, that was fun” or, “I’m glad I went.” More often than not, a party is made better by who was there. We all know the basic formula of these events (scanning the room, nursing a glass of punch, cutting the cake) but these banal moments are outshined by moments created by the guests. While the party hosted by the Getty for Hockney’s birthday does have its share of interesting guests found in the gallery full of self-portraits, the rest of the party remains dully superficial. For an artist whose best work has demonstrated the depths of superficiality, most of these works fall flat. It is really too bad—a party at this iconic location is perfect for Hockney. Fortunately for us, his retrospective will take place at the Metropolitan Museum of Art in November. The location might not be ideal for the adopted child of Southern California, but the guests might make up for it.

Images used in this review and more can be found at: http://www.getty.edu/art/exhibitions/hockney_birthday/index.html