At the outset of season five’s seventh episode, Sally and Glen have a phone conversation wherein Glen makes a sure-fire prediction: “You’ll see when you break up,” Glen says. “It hurts.”

Instead of commiserating with Glen, Sally puts up a front. “Not for the girl,” she replies. Instantly, the show sets up its interest in emotional pain and, moreover, how that pain registers within the awkward transition from girlhood to womanhood.

By the end of the episode, Sally is back on the phone with Glen, having just returned from the Cancer Society dinner where she accidentally discovers Roger, her pretend-date, receiving oral sex from Marie, Megan’s mother. 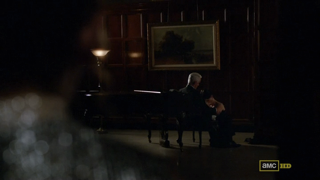 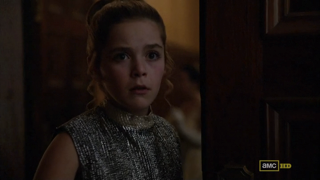 Shaken by the experience, Sally articulates her feelings metaphorically: “Dirty,” she replies.

Cut to black, roll credits, leaving us wondering why she uses that word. “Dirty” doesn’t capture the look of horror on Sally’s face earlier in the episode, when she’s trying to process the image of Marie’s head bobbing up and down over Roger’s lap. Nor does it describe Sally’s dejected body language as she walks in a daze back to her seat.

As we know it, dirt is essentially disorder. There is no such thing as absolute dirt: it exists in the eye of the beholder. If we shun dirt, it is not because of craven fear, still less dread of holy terror. Nor do our ideas about disease account for the range of our behaviour in cleaning or avoiding dirt. Dirt offends against order. Eliminating it is not a negative movement, but a positive effort to organise the environment.1

Sally’s ordered life in the suburbs is clean and boring, but the city is dirty because it tramples reassuring barriers between girlhood and womanhood. Don hopes to maintain these barriers, at least for the time being. He implies as much when he tells Sally, “You know what makes me happy? A beautiful young lady who will someday be wearing makeup. But not today.” Today, Sally is a girl who’s discovering that the transition between girlhood and womanhood is going to feel dangerous.

simply because transition is neither one state nor the next, it is undefinable. The person who must pass from one to another is himself in danger and emanates danger to others. The danger is controlled by ritual which precisely separates him from his old status, segregates him for a time and then publicly declares his entry to his new status. 2

Don wants to protect Sally from aspects of womanhood—she can keep the dress, but must lose the boots and the make-up. There is a double standard created, one that seems to suggest that Sally will not be like the women Don and Roger womanize. She’ll still be daddy’s girl. And at first this illusion seems plausible, since on this night, when Don is mingling about, Roger appears to be a safe companion. Roger is like a child himself—a joker, which Douglas defines in an essay on “joke perception,” as someone who “lightens for everyone the oppressiveness of social reality, demonstrates its arbitrariness by making light of formality in general, and expresses the creative possibilities of the situation.” One of Roger’s best moments occurs when he learns that a promising executive will lose his foot after a secretary runs it over with a lawn mower. “Right when he got it in the door,” he quips.

Roger seizes on “creative possibilities” when he implies that there’s nothing wrong with a middle-aged man and a little girl on a date together. “Where’s your purse?” Roger asks Sally after pointing out his sales targets. “You’re going to be my date. Every business card I bring back, you’re going to put it in your purse and say, ‘Go get ’em, Tiger.’”

One difference is that Shirley Temple presumably never saw Captain January receiving oral sex. If she had, she might have rethought their flirtatious, ostensibly platonic relationship in terms such as those set out by scholar Ann duCille:

However cute and frilly, Temple’s films still work to incite, excite, and satisfy a paternal white gaze, as cinema so often does. Sewing and scrubbing one moment, batting her eyelashes the next, Shirley Temple is at once a pint-size purveyor of true-womanhood ideology and a make-a-blind-man-see femme fatale. . . . She is every man’s white dream, the perfect embodiment of the virgin-whore that patriarchy loves to look at—simultaneously Snow White and Black Widow (albeit without the bite). 3

Seeing Roger receiving oral sex perhaps leads Sally to rethink moments where she presents herself for a gazing audience: 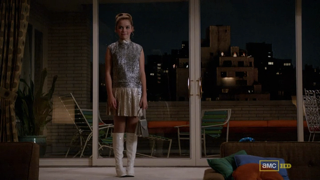 How do the onlookers view her? As an object of desire? As someone who might one day perform favors for Roger Sterling?

In this sense, Glen’s prediction rings true. Breaking up does hurt, only Sally does not break up with Roger—she breaks up with how she prefers to see herself. The break-up is echoed by the waiter who asks Sally, referring to her Shirley Temple, “Excuse me, miss, are you finished with that?” Not only is she finished with her pink virgin cocktail, she’s finished with seeing herself in an innocent Shirley Temple childhood. She’s seen the stakes of adulthood’s initiations and she tells us, succinctly, of its grubby costs. Then the screen turns black.

Sean Springer, a doctoral candidate in the Department of Cultural Analysis and Theory at Stony Brook University, is currently working on a dissertation about controversial stand-up comedians.