In this week’s episode each of the characters featured in “Far Away Places” have a moment where their self-understanding is challenged by a reflection of something else. Peggy listens to Ginsburg, but watches him in a window while he relates his hope that he is an alien, and not an orphan born in a concentration camp. She then decides to cling to at least some traditional femininity in her relationship with Abe in order to keep Ginzburg’s ghostly loneliness away. While tripping on acid, Roger speaks in a mirror with the Don Draper that lives in his head. He chooses to speak to his wife that night with only the truth in mind; they decide to divorce. Don looks out of the meeting room and sees the skyscrapers of Madison Avenue, which reflect back onto him. Don remains silent, implying that he must decide if the business will define him, or he it. 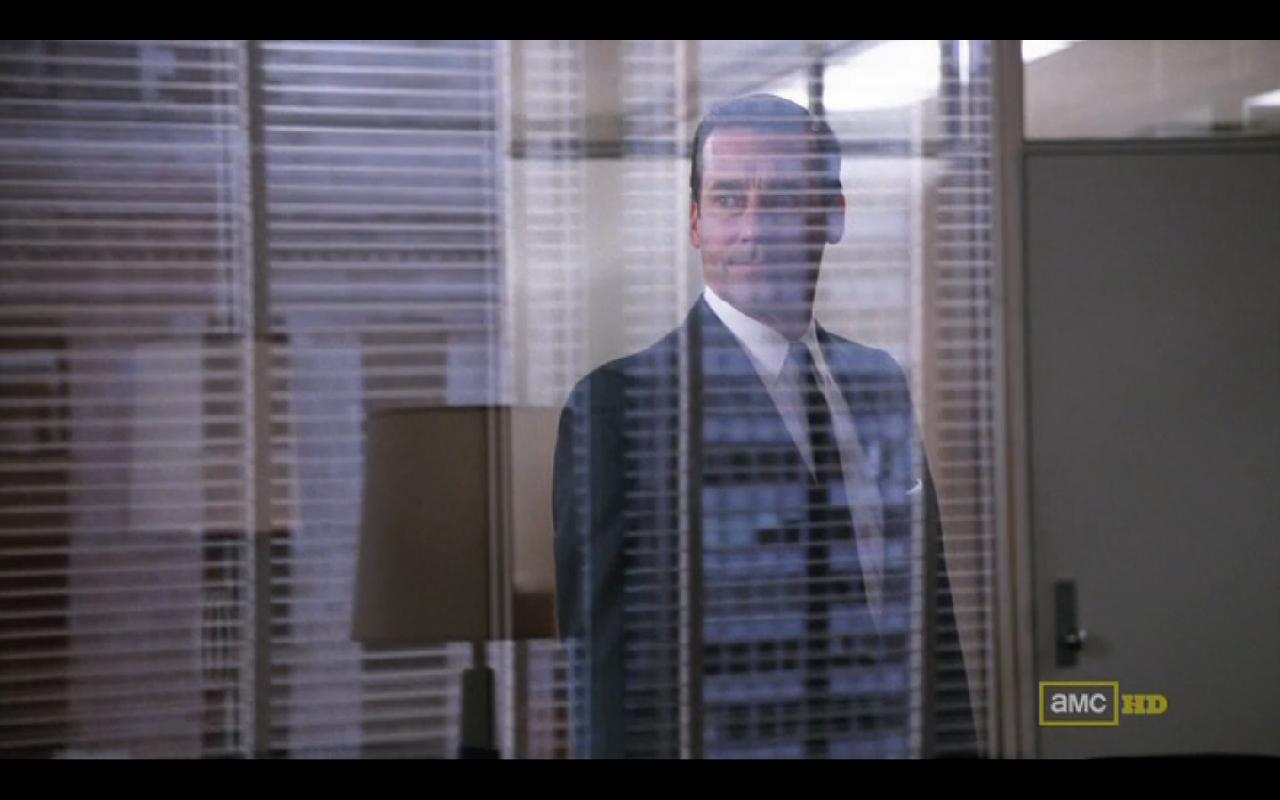 Don inscribed with the reflection of Madison Avenue

We came back to this season not knowing what to expect in the Sterling Cooper Draper Pryce family. Historically, 1966 was a good year for small advertising agencies run by their creative teams. Small agencies like Doyle Dane Bernbach or Wells, Rich Greene in the early sixties left large agencies in search of more creative freedom. Between 1960 and 1970 the advertising business doubled in revenue, and small firms like SCDP maintained profit margins roughly double the big firms. Small firms’ allure to corporate America had to do with a “rage for creativity—which came quickly to mean an appeal to nonconformist rebellion against the mass society in ads as well as a nonhierarchical management style.”1 As the counterculture became more visible to the public in the late 60s, these firms were able to appropriate it to sell mainstream consumer culture, capitalizing on a “sudden mass defection of Americans from square to hip” in their self-perception.2

SCDP could be one of those firms that capitalize on selling hip to mainstream America. Given Don Draper’s brilliance, it should be one of those firms. But in this season I would suggest that we are seeing Don struggle internally over whether he wants to be hip or square. As Norman Mailer wrote in his classic 1957 Dissent essay, “One is Hip or one is Square (the alternative which each new generation coming into American life is beginning to feel) one is a rebel or one conforms, one is a frontiersman in the Wild West of American night life, or else a Square cell, trapped in the totalitarian tissues of American society, doomed willy-nilly to conform if one is to succeed.”3 We saw some of Don’s ambivalence on display in the aptly named “Tea Leaves” when he speaks with a young fan of the new hip, and seems pretty terrified by the implications. 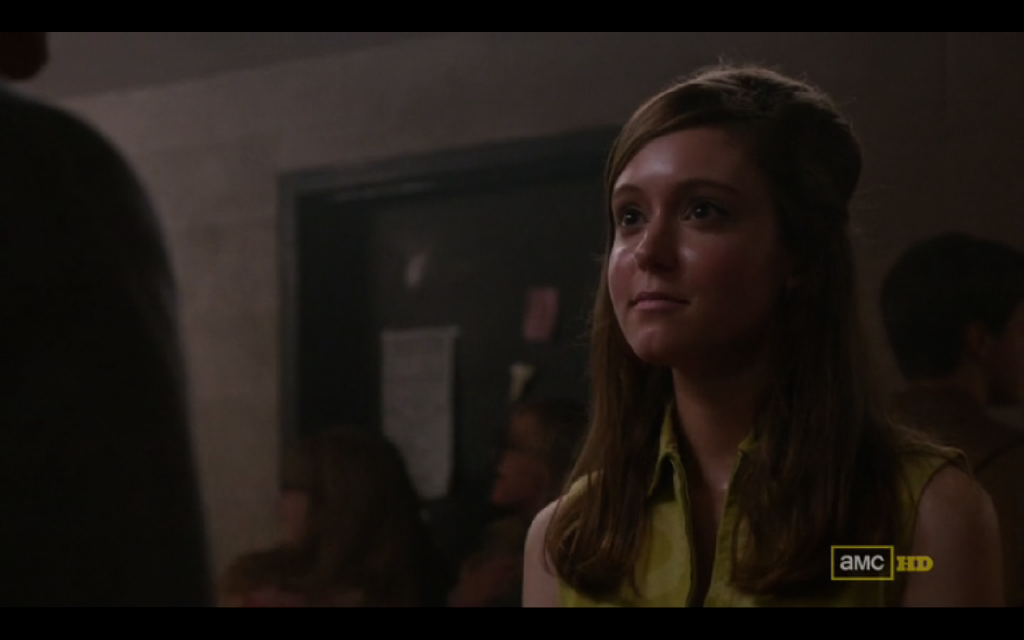 The face of the counter culture

The main site of Don’s resistance to the hip this week is at the very square Howard Johnson motor lodge, between a gift shop and orange sherbert. The logic of Megan and Don’s relationship continues to be elusive, but for now we see at least the squareness of Don’s marital expectations, best described by Megan, “You like to work, but I can’t like to work?” 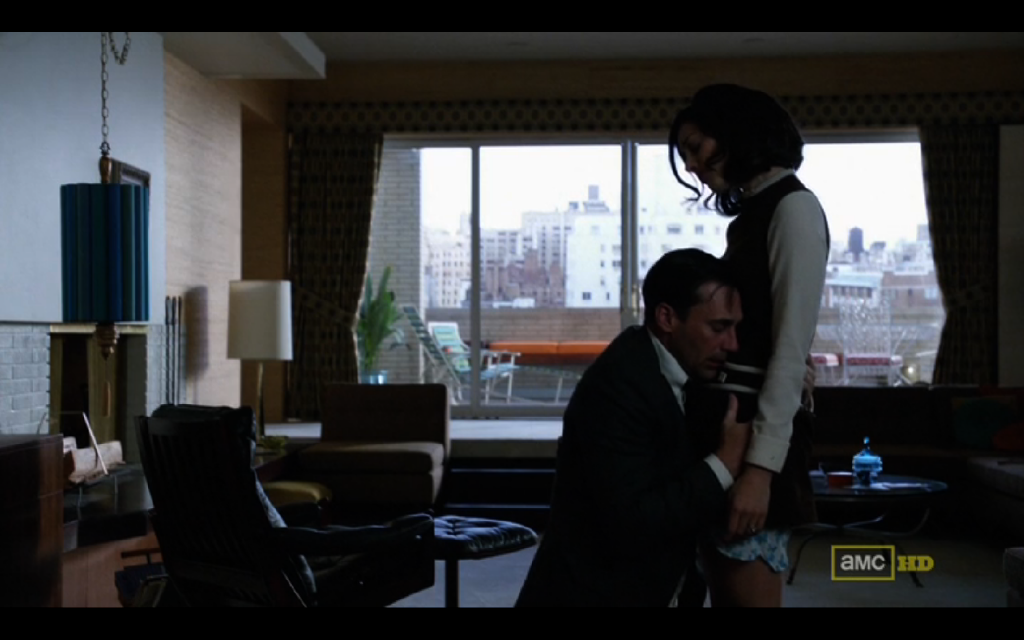 All of our suspicion that Don wants Megan to be a nubile sex object to make him feel young and hopeful, instead of angry and desperate, is confirmed in these words. How he handles their conflict only confirms it. When Don finally gets back to their swinging apartment, we see a reenactment of their sex-charged fight from the first episode of the season. Only this time it concludes on a very different note. We are left to consider what this means: 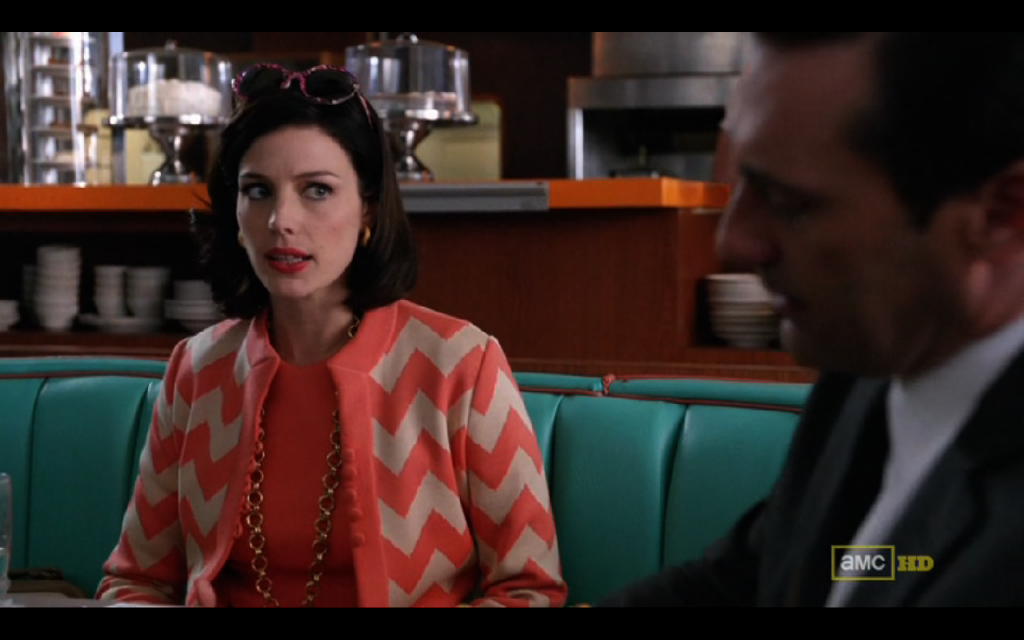 What is Don holding onto exactly?

It is ironic that out of the three characters portrayed in “Far Away Places” the character that most represents the old guard in advertising seems the most at ease with the rebellion and idealization of individuality presaged by the looming counter culture. What will Roger Sterling do next? As Bert Cooper enjoins Don to get his act together, we are left on something of a cliffhanger: which way will Don choose to go? Does he need to entrench his square ideas of domesticity and work, to try to reify the persona that he has thus far been so outwardly successful in cultivating, or is their some catharsis and new vista of success that Don can experience in embracing the hip on all levels of his life?

Matt Allison is a doctoral candidate in the History Department at the University of Rochester. He resides in West Philadelphia.