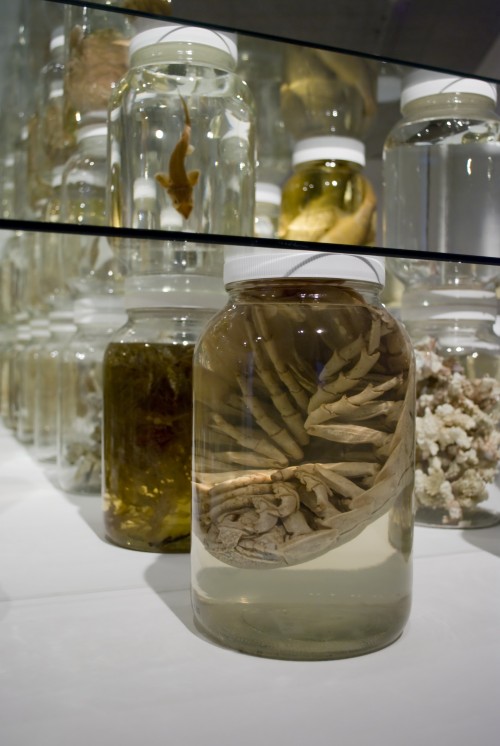 The month of April marks the forty-fourth anniversary of the first Earth Day.  Officially celebrated on April 22nd, Earth Day was an extended series of events that took place between March and April of 1970 that culminated in teach-ins, and other activities in parks, temples churches and corporate offices.  Garnering more support than civil rights’ or women’s liberation protests, Earth Day marked the beginning of what we know today as the green or environmental movement.1

The month of April also marks the fourth anniversary of the British Petroleum Deepwater Horizon spill off the Gulf Coast of Mexico.  Between April 20th and September 19th 2010 nearly 4.9 million barrels of oil discharged from the BP operated Macondo Prospect.  The spill was the worst in U.S. history and continues to adversely affect the Louisiana coastline’s birds, fish and other aquatic organisms.2   Though artist Brandon Ballengee completed his large-scale installation Collapse, a collaborative project with Todd Gardner, Jack Rudloe, Brian Schiering and Peter Warny in 2012, it seems evermore timely to invoke it here at the intersection of two significant anniversaries.  The installation, moreover, takes on renewed significance with the latest BP spill in Lake Michigan, which, as of the beginning of April, was reported to pose no long-term risks.

Despite the latest claims concerning Lake Michigan, Ballengee’s work is precisely about the prospects of long-term risk and damage.  Taking the degradation of biosystems with respect to the Deep Horizon spill as its subject, Collapse serves as prism through which to view these discrete moments, linking them, as well as their attendant discourses, together through a process of retrospective and critical reflection.  At the same time, the installation stages a dialogue between aesthetic practice and the shifting notions of ecology and environmental thought. 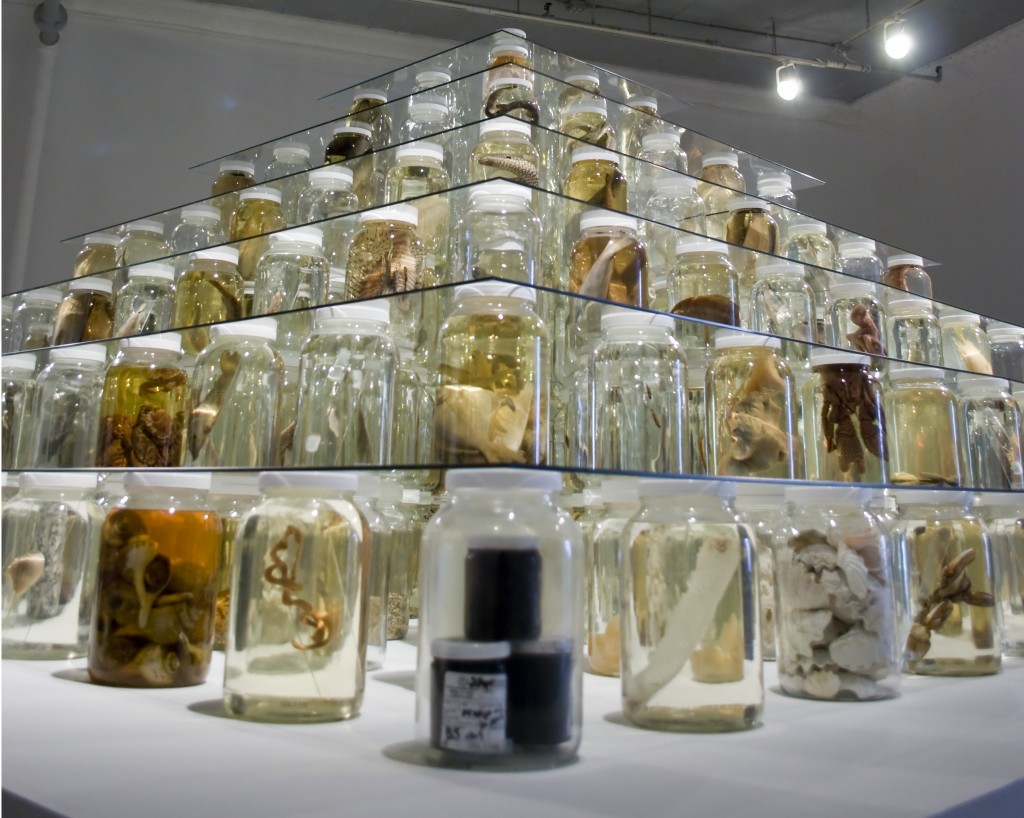 Comprised of a pyramid of glass vessels, Collapse holds 26, 162 preserved specimens in clear solution, each representing 370 species of fish and other aquatic specimens.  The pyramid’s seven tiers reference the “trophic pyramid,” a representation of an ecosystem food chain, which in Collapse Ballengee reconfigures to contain species that were either deformed or endangered as a result of the BP spill.  The empty vessels in the pyramid reference extinct species wiped out by habitat degradation or overfishing.  Others still, contain either crude oil or Corexit, the toxic solvent used to dissolve slicks and prevent accumulation on beaches. 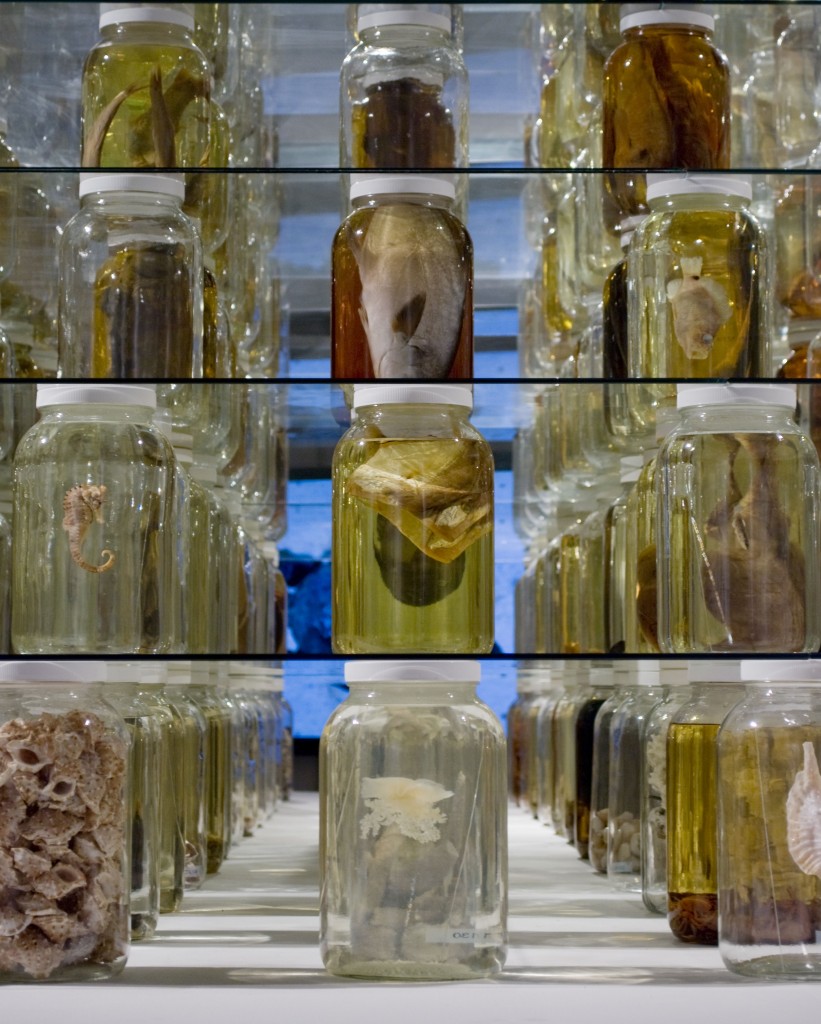 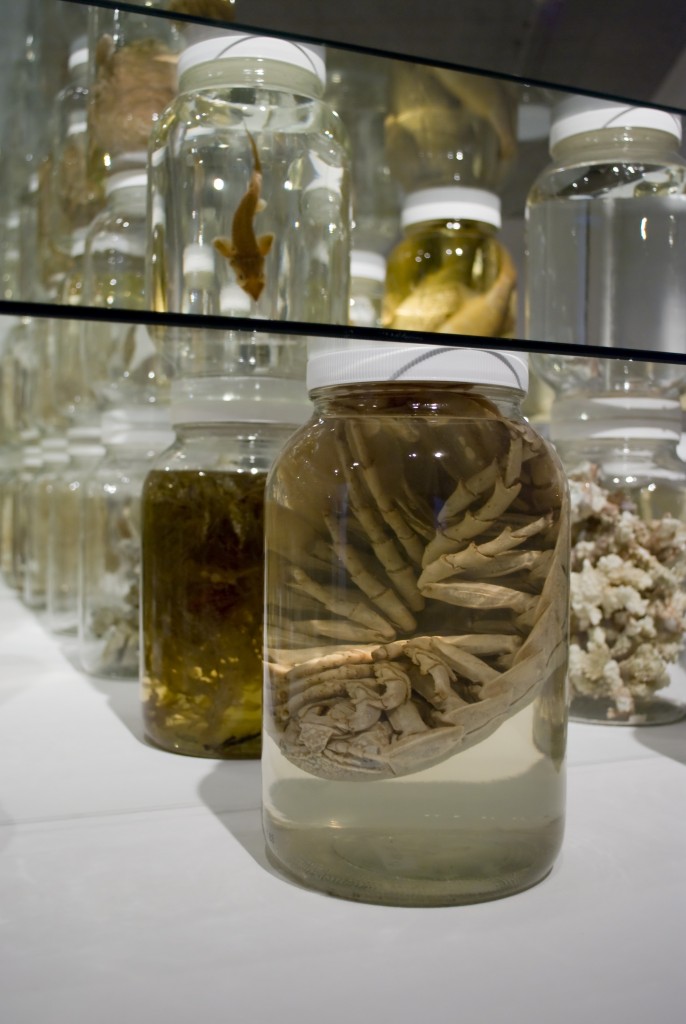 Together, the elements of Ballengee’s trophic pyramid—from the biotic to the manmade—conjure ecology in at least one sense of the term: a habitat made up of a series of nodes that deeply affect one another.  Collapse bears the proof of this interconnectivity shoring up a biosystem already in the process of collapsing as a result of the BP spill.  Similarly, the pyramid of glass threatens collapse with the displacement of any one vessel, a constituent part in the structural integrity of the whole.

It also draws our attention to practices of charting and cataloguing reminiscent of the nineteenth century, in which living organisms were transformed into specimens or objects of knowledge.  Jarred up and separated from other specimens in the installation, each organism becomes an artifact that, despite the ecological reference, effectively suspends the dynamism the term elicits, a suspension that simultaneously points to an environment made unlivable by the conditions of the spill. 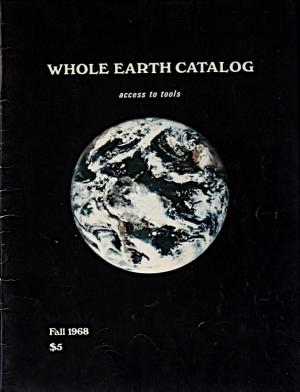 Prior to the momentum brought on by Earth Day in 1970, which has arguably lost the critical edge it once had, or the growing trend toward a more global consciousness, evidenced for example by Stewart Brand’s Whole Earth Catalogue and it’s focus on environmentalism, artists were themselves toying with notions of the environment.  However, those early environments were rooted in a phenomenological experience of space, derived from the Happenings of the early 60s and later minimalism.  It wasn’t until the dawn of the seventies that the two notions of environments might merge, only after and not with the meteoric rise of the large-scale land art of the late sixties.  Indeed, the first and perhaps most well known iterations of Land art, created by heavyweights Michael Heizer or Robert Smithson, were only environmental to the extent that they were open-ended spatially.  They created total, enveloping environments.  But of course, they lacked the tenor of an emergent ecocritical thought that drew from other protest and back to the land movements, which coalesced, in part, in the first Earth Day.  Art would eventually  come to reflect this broader cultural shift as Newton Harrison and Helen Meyer Harrison’s Shrimp Farm: Survival Piece #2 from 1970—a series of discrete ecosystems of shrimp and other aquatic organisms—exemplifies.3

In hindsight, Balengee’s Collapse seems to draw from Shrimp Farm, or perhaps more broadly oscillates between the multiple senses of environmentality—from the spatial to the ecocritical—at play then.  Bringing them into focus now, Ballengee produces an installation that rearticulates the stakes of that early discourse, in fact renewing them altogether under the new terms of BP’s recent oil spills.  Looming above visitors, Collapse’s glass vessels filled with floating organisms or manmade products elicit a modicum of unease, a barely articulated sensation of physical peril.  At the same time, Collapse discloses the paradox at the heart of ecology in which the dynamic and interconnected always threaten collapse, at worst species extinction, with incremental and disastrous changes alike.  The installation is compelling, then, because of its precariousness, the precariousness it engenders through its form, as well as that which it references in an ecological sense.  Here, within the confines of the installation, it purposes a productive tension between either forms of precarity while opening up the spectrum of the environmental to the artistic and the biotic.  All the while, Collapse sparks a dialogue in which we might think together these seemingly discontinuous events, across artistic and cultural movements.

Alicia Inez Guzmán is a PhD Candidate in the Program in Visual and Cultural Studies at the University of Rochester.