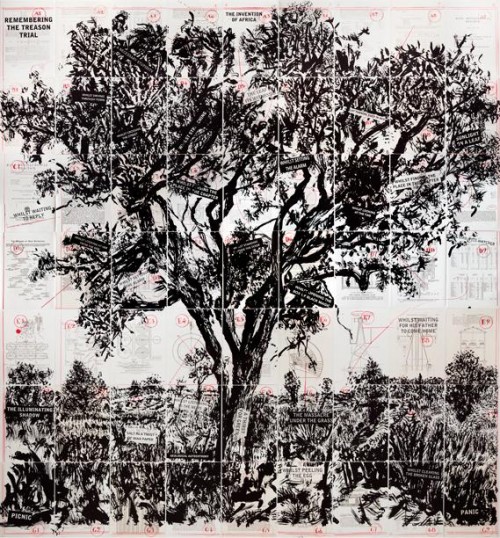 William Kentridge thinks a lot about thinking: its errant trails, its spasmodic lurches, its spectacular leaps. Drawing, he has often stressed, can function as a form of thinking but equally– and especially when chased by the artist’s eager eraser – it enacts a wilful un-thinking in which every notion can potentially be undone, and every idea arrives partnered with a nay-saying dialectical double. These revisionary “second thoughts” often assume human, usually Kentridgian form, striding onstage during the artist’s public lectures to chide, correct and contradict. Fingers are wagged, eyebrows raised, eyes rolled in exasperation. “The horn of the rhinoceros is in the wrong place,” one superego character chimes. “I don’t want to hear it,” the other retorts. “But if you would just take the time to look at these textbooks, you could see how it could be done better…” the first nags. “Just fuck off! Just fuck off!” the second repeats exasperatedly.

At “Second-Hand Reading,” Kentridge’s recent keynote lecture at the University of Rochester, the themes of second thoughts and second selves (the latter, Stanley Cavell’s notion) hovered nearby. But on this occasion the artist was less concerned with staging the “second-hand” as an agonistic battle between a thought and its rebellious counterthoughts (on the one hand x, but on the other hand y…,) than with the indirect quality of knowledge, which is still mediated, primarily, by books. Despite the vaunted value of direct experience and firsthand investigation, most of us accept what we know on belief, usually third- or fourth-hand. And happily so. For what is first-handedness but a dream of pure access to things, a notion that seems dubious at best, spurious at worst? At stake in Kentridge’s musings on reading and learning was both a mistrust of the unified, singular voice of authority – hence the raucous chorus of doppelgängers interrupting, interjecting, supplementing – and a suspicion of the authoritarianism of ranking thinking in a hierarchy of purity, with all of its Platonic evocations of essence and appearance. Against this backdrop, Kentridge’s lecture approached learning and thinking laterally, digging into his work of the past year to excavate the branching associations and ramifying offshoots of his rhizomatic thought process. 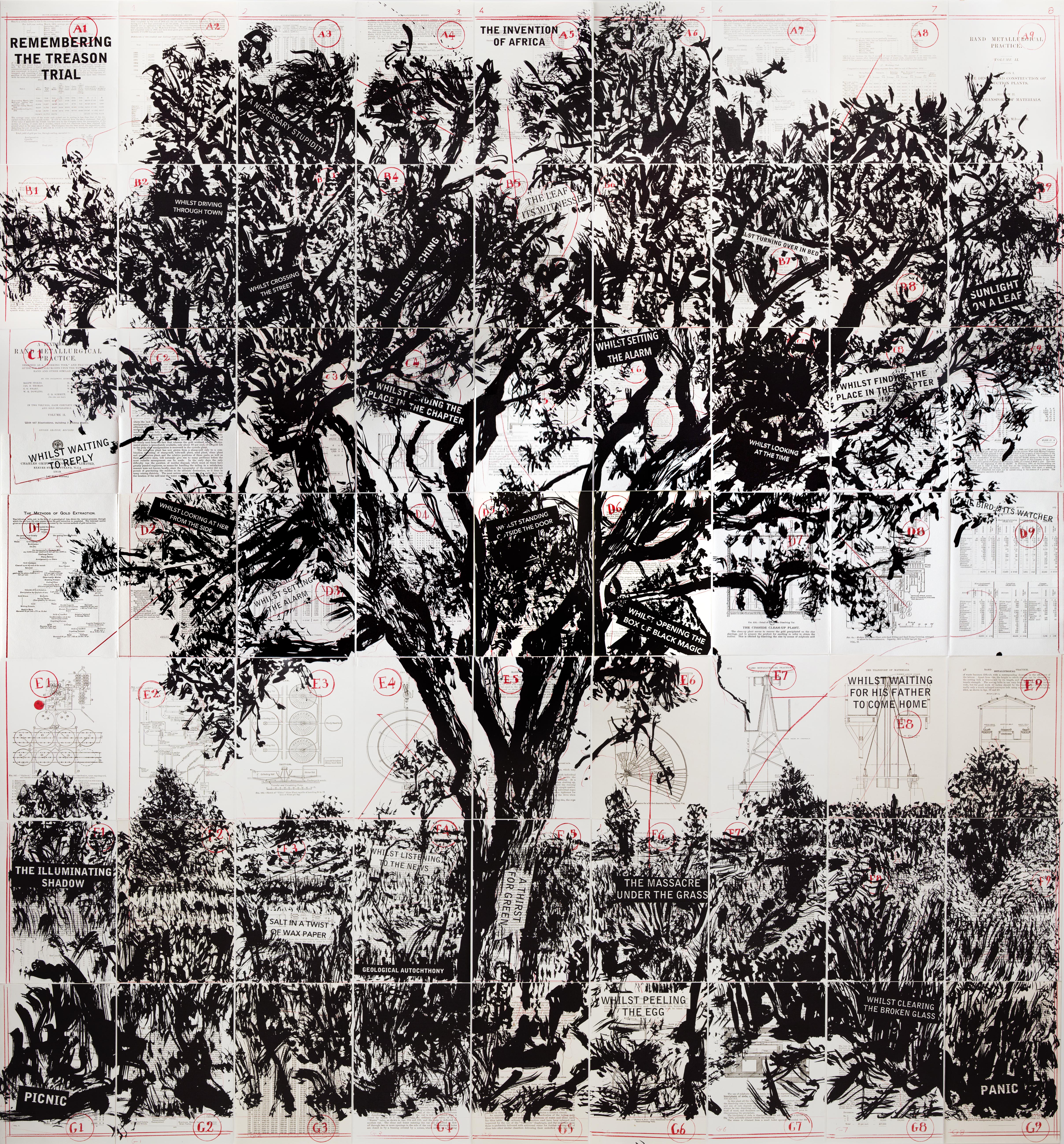 Suitably, the issue at hand was trees, specifically Kentridge’s recent infatuation with making large India ink sketches of local specimens. Trees led to books, and then on to paper and the words they hold (or release). The ease with which Kentridge jumped between the tree’s papery destinies and the word’s woody pasts emphasized the artist’s idiosyncratic, yet deeply characteristic, conception of his subject as neither the stable nor enduring entities we usually assume trees to be. Rather, the tree spun before us as an object in historical flux, bearing traces of former lives, restless with the possibilities of unseen futures. In fact, Kentridge’s lecture diagrammed the same arc of change as the jittery objects of his animation, a logic conveyed in his explanation that: “its easier to draw a table if you understand that table as an intermediary stage between the tree, the factory, its moment in the room in front of you and its future, as it were…”1 In this way, the artist revealed how a classically Marxist sense of the alterations written into an object’s materiality subtends both his drawing and his thinking. Remembering the Treason Trial (2013) embodied this transformative sensibility, unfurling from inside its green cover and folding out along scored edges to reshape itself into a wall-sized sheet, thereby performing its own metamorphosis from book to drawing. 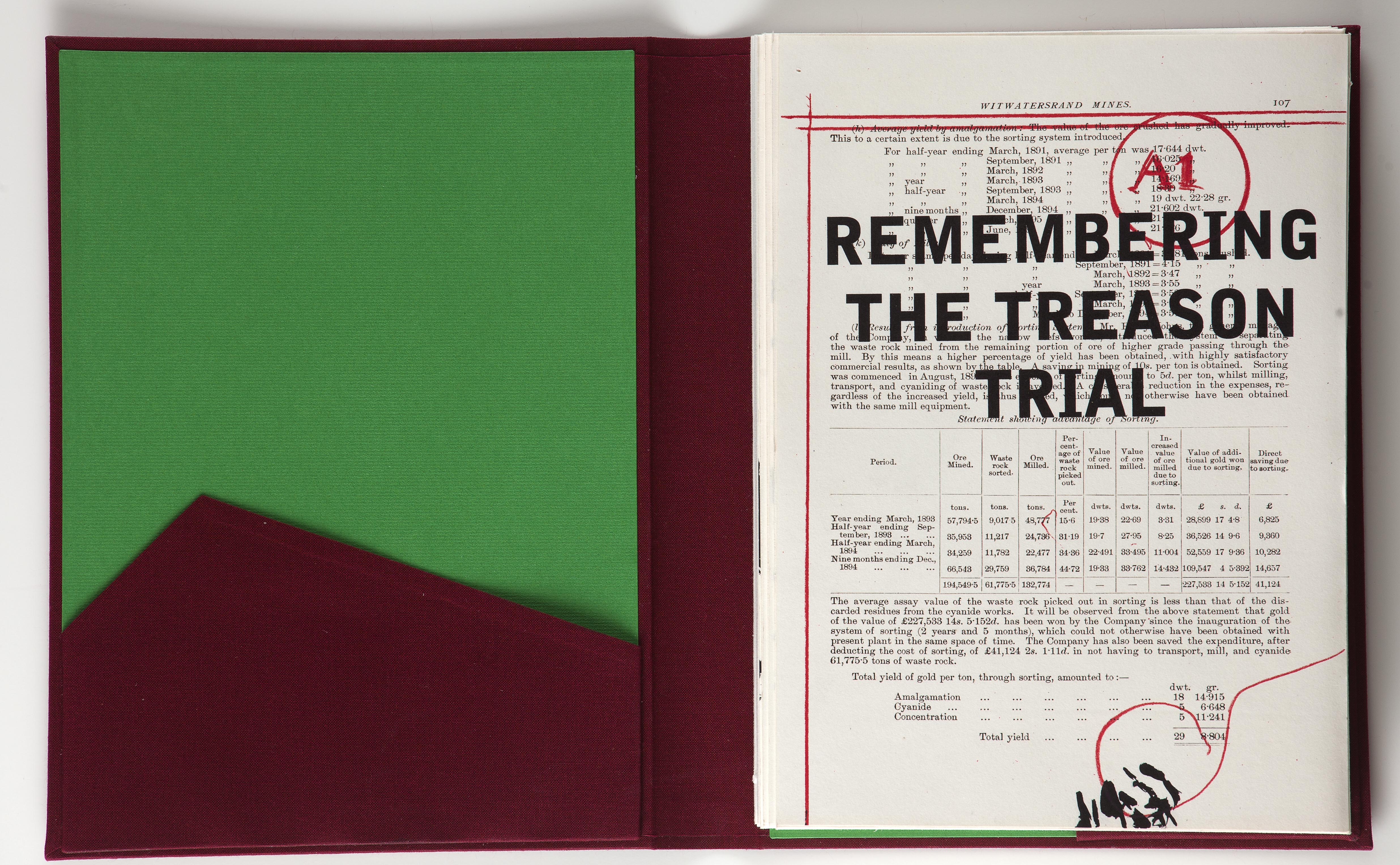 Kentridge’s lecture alighted on other kinds of alterations too, especially moments when the brain, stymied by incomprehension, sparks solutions, tweaking words and inventing concepts. Two exemplary instances, both tree-related, made this case. The first was the artist’s mishearing of a friend “making a T-shirt” and his instant reconstitution of it as “making a tree search;” the second, his charming childhood conversion of his father’s daily departure for the Treason Trial in late 1950s Johannesburg as a foray into the garden somewhere between the “trees and tile” (between a pair of pine trees and a mosaic tile table.) These musings on the brain’s irrepressible need to construct sense and its endless ingenuity in doing so, joined larger considerations of understanding and misunderstanding: of how the will to learn co-exists with the impossible excess of information we already store, and of how the encyclopedia – or the codex in general – beckons as a repository for this surfeit. Probing the relationship between the knowledge entombed in the book and the jumble of thoughts in our head, the artist observed that the materialization of thought into written form can absolve us of the responsibility to think, much as James Young has argued that monuments allow us to forget. Ultimately, what emerged from Kentridge’s seemingly stray reflections and adventitious anecdotes was a rigorous set of questions plying the possibilities and limits of thinking and knowing, and the role that not only books, but also words, play in shaping it.

To this end, Kentridge marveled at the mundane yet absolutely astonishing way in which syntax tames and unifies thought into a flow of perfectly formed sentences. In the context of a lecture, this last point drew attention to the formal maneuvers of speech itself, making the audience cognizant of witnessing a supreme example of a mob of dissenting thoughts aligning into a marching procession of words. Yet even as Kentridge highlighted this ordering process – partly through his polite apologies for his scattered ideas – so too he railed against it as an unacceptable simplification. The discipline that syntax imposes on our thoughts, we came to see, is less a mastery to be lauded than a subjugation to be met with caution. 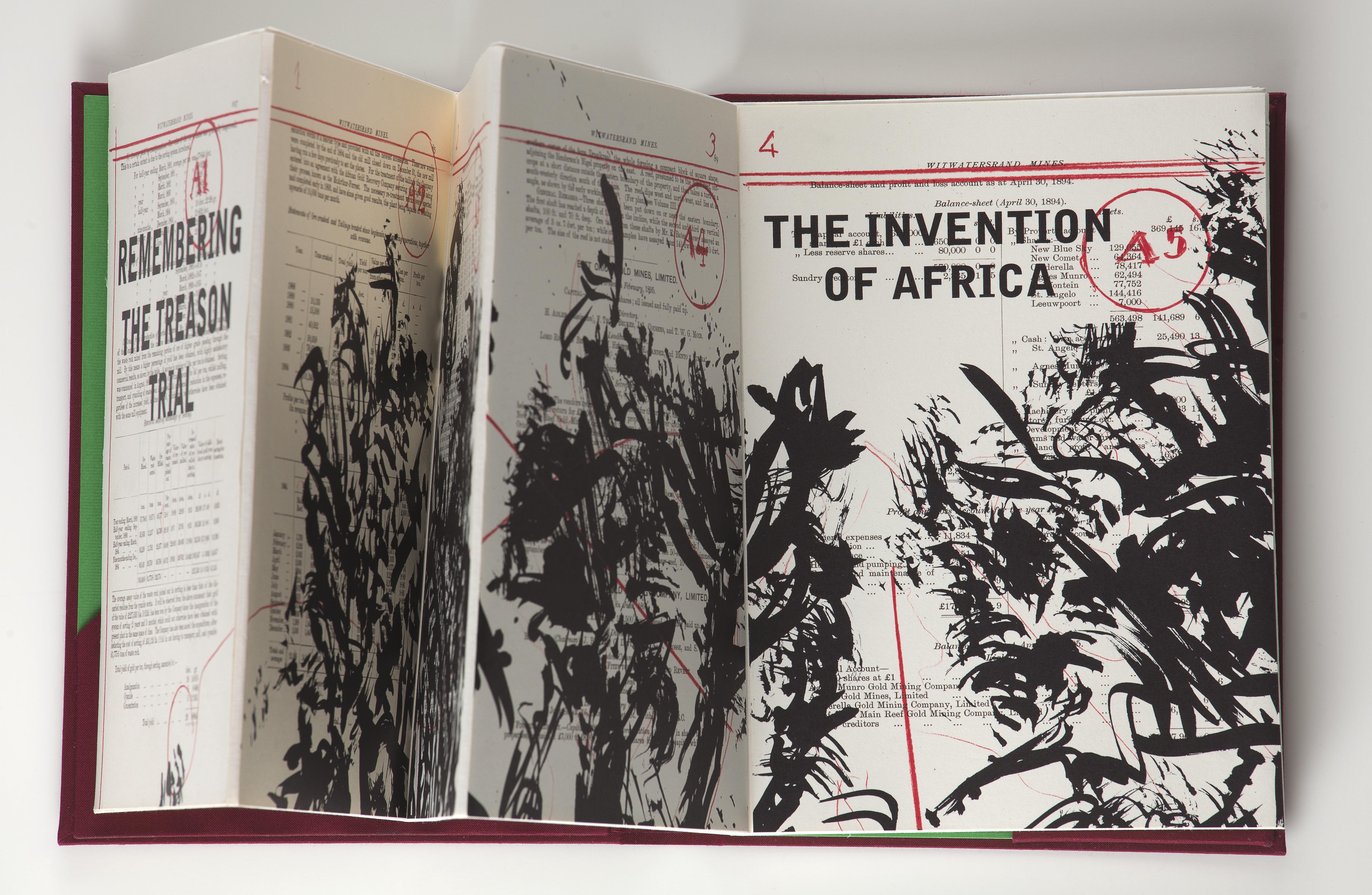 At this juncture, John Cage seemed to throw his shadow over the room by way of his frequent reminders that syntax was originally a military term. Indeed, for his 1988/89 Norton lectures at Harvard, Cage jettisoned the “coercion” of the sentence in favor of the mesostic, a never-ending tree of randomly generated words with horizontal branches. When Kentridge described how the preparation for his rendition of last year’s Nortons began with him “writing a note of every idea he’d ever had or heard of someone else having and then dividing it all by 6 and these became the 6 lectures,” his surprisingly Cagean method nodded to his predecessor. (A more explicit salute was given during the last Norton lecture itself, where Kentridge proposed a four and a half minute hiatus of silence…) Ultimately, however, Kentridge’s assaults on logic pale in comparison to Cage’s trouncing of it. For while the South African’s lectures hinge on fortuitous connections, holding logic at bay long enough to open up discursive space for chance and free associations, they remain reasoned justifications – if not actual defenses – of his art. Cage’s mesostics are no such thing. In fact, the notion of the brain at work – which Cage pointedly rejects by replacing it with the computer’s random I-Ching re-organization of his chosen texts – is the very concept Kentridge dissects time and again, paying tribute to the operations of our cerebral cortex no less through his highly articulate performances than through his self-reflective parsing of the minutiae of speaking and thinking.

Thinking and learning – and thinking and drawing about thinking and learning – have long structured Kentridge’s work. “Learning” in particular is a term the artist favors both for contemplating the merits of specific visual vocabularies – as in: “What we can learn from shadows?” – and for describing the process of becoming acquainted with said grammars, as in Learning the Flute. In the case of this last project, the process of accruing knowledge became crucial to the work’s final iteration, which was projected on a schoolroom blackboard, charcoal reversed to trails of white light in the first of many inversions of the metaphorics of light and knowledge. Most recently, the artist’s extended series of Drawing Lessons again homed in on rhetorics of teaching and their possibilities, forming ironic dispatches from a studio embedded in memories of the Brechtian lehrstück, yet one which clearly rejects the confidence in communication such conceptions hinge on. For while Kentridge’s “lessons” are consummately theatrical, they are anything but prescriptive, offering only cautions about the certainty and pretensions of knowledge. In this way, it is not only Kentridge’s extensive pondering of learning and thinking that makes him a welcome guest at universities, but also his willingness to critique its most cherished assumptions: knowledge as an end, certainty as a useful means to achieve it. He does so, moreover, within terms legible to the academy (coherent arguments, Socratic references, etc), thereby cloaking his suspicion towards the authority of the Western canon with the veneer of an internal critique, even though the artist’s peripheral location arguably troubles such assumptions.

Yet even as Kentridge speaks the language of academia with great ease, he is the first to distance himself from it, reminding us that he is “an artist not a scholar….” and his job is to “make drawings not to make sense.”2 That he does make sense – and so much of it – is due in large part to his willingness to abandon it. Which is to say: to throw it in the air like a cascade of woodchips. Or a pile of leaves (the tree’s mingling with the book’s, mind you.) Or the pieces of a large puzzle – which the fragmentary, taped-together lattices of his tree studies increasingly began to resemble. And even as he reassembles these fragments in new and innovative ways, he won’t let us forget the fragility with which they are held together, or their urge to fly backwards into the anarchy of the scatter. Is this force entropy, I began to wonder, or rather, our attraction to the promise of the unmade and the unbuilt, the unresolved and the disunified? Our urge to “unthink” the thought we just had. In any event, it places us into a universe of endless bits and pieces, only some of which submit to being glued back together. To be sure, by the end of Second-Hand Reading, the allure of thought’s tiniest and most scattered branches had quietly trumped the enticements of unity. Or to restate the point: perhaps not being able to see the forest for the trees is, after all, a good thing.