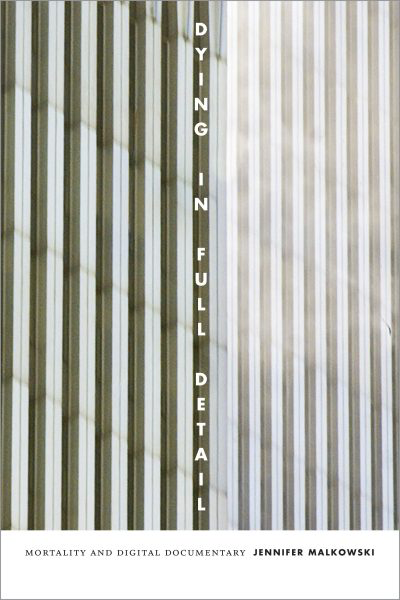 In Dying in Full Detail: Mortality and Digital Documentary, Jennifer Malkowski, Professor of Film & Media Studies at Smith College, looks at the intersection of death (as a corporeal and physiological process) and documentary (as a genre and mode of representation) in the digital era. Malkowski’s critical reappraisal of documentary death interrogates the desire to represent death in “full detail,” from analogue photography and film through live-streaming of digital video on mobile platforms.

The desire to capture death, Malkowski notes, has “attracted many cameras” (3). It has been variously subject to cultural taboo and fascination; it persists in many modes and across multiple media, serving shifting social and political functions. In “Looking at War,” Susan Sontag registers 1945 as a pivotal turning point in representations of “death in the making.”1 New mobile lightweight technologies registered the brutal cost of modern warfare as never before, impelling debate about the incredible risk and imperious ethical necessity of bearing witness to the unimaginable scale of mass death at Bergen-Belsen, Buchenwald, Dachau, Hiroshima, and Nagasaki. Entering the fray of these critical mediations with images, Malkowski proposes to consider the “representation of the unrepresentable”—a polemical phrase that will be familiar to readers of Jean-François Lyotard, that invokes a post-Kantian problematic about the limits of representation of historical trauma.2

Malkowski positions her study at yet another significant historical shift in the scopic regimes of visual culture: when digital technologies have enabled death’s capture and circulation with greater ease and ubiquity than ever before. From the surreptitious capture of suicides through the pervasive images of anti-black police violence, contemporary media is saturated with images of the dead and dying. Malkowski interrogates the idea that death is “unknowable” or “beyond representation”—an idea she aligns with ongoing “moral” and “metaphysical” prohibitions against screening death (3). André Bazin serves as the main foil, but she takes aim at the larger cultures of death’s denial famously diagnosed by Ernest Becker in his 1973 study of the repression of mortality in the West.3 What does the digital disclose about death? What does death reveal about the digital? These two questions organize and divide Malkowski’s study into two main sections. Her main thesis across these two parts is that video, and especially digital video, promises to show us more death and to show us death in more detail than ever before. Digital media are more adept at the capture of death; their specific technological affordances allow unprecedented mediation of death. And yet, she argues, death always slips out of our visual frames. Exploring the dialectical tension between death’s hypervisibility in visual culture and its paradoxical invisibility as an object of phenomenological analysis, Malkowski tracks the persistent desire to represent death in American cultures of death from the nineteenth century to the present.

Malkowski’s study proceeds chronologically. She begins, in “Capturing the ‘Moment’: Photography, Film, and Death’s Elusive Duration,” by detailing early efforts to register death from the 1839 invention of photography through the rise of film. She considers how post-mortem photographs helped reintegrate the dead into the fabric of nineteenth century life and how twentieth century American death cultures sought to repress death, only for it to resurface as a point of fixation in the era of indexical media. As death was lost down the corridors of the modern hospital, it reemerged in graphic and violent representations in film and photography. She surveys this displacement at work in a series of iconic death scenes in America, including collodion wet-plates of fallen Confederate soldiers on the blasted fields of Antietam, the fraught archive of Southern Lynching postcards, the haunting 8mm footage of President Kennedy’s assassination, and Eddie Adams’ iconic photograph depicting the summary execution of the handcuffed Vietcong prisoner Nguyễn Văn Lém on the streets of Saigon during the 1968 Tet Offensive. From this mortiferous topography emerges a diagnostic account of the enduring visual quest to frame the “moment of death” as a sharp moment of rupture between life and death—or “Life / Death,” as Barthes puts it in Camera Lucida.4 The book’s most incisive passages argue that photography ultimately fails to extract a definitive instant from “durational processes of dying” (20). Death disrupts the instant, even as photography seeks to make it available for visual mastery.

She follows this with “The Art of Dying, On Video: Deathbed Documentaries,” which offers a corrective to the first chapter. Malkowski examines small, personal documentaries, including Michael Roemer’s Dying (1978), Peter Friedman and Tom Joslin’s Silverlake Life: The View from Here (1993), and Kirby Dick’s Bob Flanagan: Supermasochist (1997) that chronicle intimate encounters with slow processes of illness and dying, whose very duration paradoxically makes death resistant to representation. Vitalized by emerging new video technologies, these time-based works exploit the medium’s durational affordances to produce more ethically engaged documentaries. Displacing the fetishistic fixation with the specular “moment” of death, all three works focus on the illness that precedes “natural” death and the mourning that follows it. What emerges are new experiences of mortality and practices of dying made possible by a confluence of factors in death and media cultures in the 1970’s through the 1990’s, in the wake of the AIDS crisis, modern hospice care, and new “death-positive” movements.

Building on her assessment of video’s durational affordances, Malkowski’s third chapter “A Negative Pleasure: Suicide’s Digital Sublimity,” interrogates documentary attempts to make the largely invisible social epidemic of suicide visible. Malkowski mobilizes the “aesthetic lens” of Kant’s critical category of the sublime to draw out the fraught aesthetic and ethical implications of Eric Steel’s controversial documentary The Bridge (2006), which records jumpers on San Francisco’s iconic Golden Gate Bridge over a period of a year (125). She compares this with Natalie Jeremijenko’s Suicide Box (1996) and bystander images of the World Trade Center jumpers, to examine what she calls the “optics of suicide by falling” (113).

The final chapter, “Streaming Death: The Politics of Dying on YouTube,” interrogates the production, circulation, and consumption of death in the contemporary digital landscape of mobile screens and platforms like YouTube and Facebook. Malkowski pulls two names from the ongoing litany of lethal encounters caught on camera: Oscar Grant, a Black youth killed by Oakland police officer Johannes Mehserle on a BART subway platform in 2009, and Neda Agha-Soltan, an Iranian student killed by the Islamic government loyalists, the Basij paramilitia, during the 2009 election protests in Tehran. Taking a transnational, comparative approach, she considers how these viral videos are implicated in the visual economy of spectacle, and examines their pragmatic value as a resistant activist practice in the context of the contemporary movement for Black lives and the Iranian opposition. I would have liked to see a stronger articulation here of the thanatographic contours of biopolitics. How are spectacularized images of Black death instrumentalized by the contemporary necropolitical state? What kind of symbolic work do these images perform in the reproduction of white supremacy? In this regard, writings by Black visual culture scholars, such as Saidya Hartman and Christina Sharpe could expand on the regulatory uses of documentary death in the digital era, while foregrounding and problematizing the study’s own implicit (and necessarily complicit) white positionality.

Dying in Full Detail draws critical, analytic resources from Linda Williams’ incisive interrogations of the scopic structures of power and pleasure, as well as Vivian Sobchak’s ethical taxonomy of “gazes.” It follows trajectories sketched by feminist film theory between spectatorship and corporeality, ethics and aesthetics. But Malkowski’s research also fits into a number of studies that explore the intersection of death and visual culture, including Jay Ruby’s Secure the Shadow (1995), Barbara Norfleet’s Looking at Death (1993), and Scott Combs’ Deathwatch (2014). Malkowski adds to these works a specific focus on digital screen cultures. “Death” emerges from her study as mobile, multiple, constructed, and reconstructed according to how it is discursively framed by evolving media technologies. While the digital makes death more visible than ever, it always falls short of giving us access to death as such, or “in-itself.” Documentary never makes good on its promise to grant access to death “in full detail.” What it reveals instead is a series of questions about the aesthetics, ethics, and politics of death.