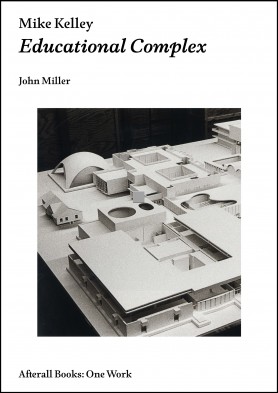 John Miller’s monograph Mike Kelley: Educational Complex is part of the Afterall Books One Work series, which claims, “a single work of art can literally transform, however modestly, the way we look at and understand the world.” Indeed, one of Miller’s crucial insights is the extent to which the late contemporary artist Mike Kelley was a master of institutional critique, inspiring his viewer to question the social order inherent to education and subject formation. Educational Complex, the centerpiece of Kelley’s 1995 show “Toward a Utopian Arts Complex” presented at New York’s Metro Pictures gallery—now residing in the Whitney Museum’s permanent collection—is an all-white 57 3/4 × 192 3/16 × 96 1/8 in architectural model. The form evokes institutionalism, and the ghostlike appearance implies forgotten spaces, memory, and trauma, real or imagined. The model is an amalgam of what Kelley could remember of the floor plans of the schools he attended from elementary through CalArts, as well as his childhood home. On the underside of the work’s base is a model of CalArts’ sublevel, and below that, on the floor, lays a mattress that ostensibly allows the viewer to gaze upward, suggesting Educational Complex’s relationship to the vantage point of the unconscious (24). The components form a “complex” that, as Miller deftly argues, simultaneously signifies an architectural structure, a political apparatus, and/or a psychological disorder. Miller explores the work through all three connotations, effectively demonstrating that Educational Complex, which early critics interpreted as illegible or farcical, is a weighty piece that operates on multiple registers. His study is divided into three sections, corresponding to three analytical themes: “The Making of Educational Complex”; “Education: Apparatus and Experience”; and “I Believe the Children: From the Sublime to the Uncanny.”

In Section One, “The Making of Educational Complex,” Miller formally analyzes the work arguing that in its cool, detached questioning of the “ideological horizon of art as an institution,” Educational Complex represents both a “decisive shift from everything Kelley had done before, and . . . a touchstone for much of his work to come” (13). The piece appears cold, neutral, bland. But “offsetting the work’s seemingly dispassionate objectivity is an involved rhetorical framework about what the models represent and how viewers should understand them” (13). Miller states that Kelley directed how the viewer should interpret his work as, for example, indicative of trauma (14). However, in suggesting this, Miller contradicts his argument to come: that Kelley’s art, including Educational Complex, serves always to “blur lines between intention, reception or signification” (13). Kelley thus engages the viewer in a meta-awareness of his or her own assumptions about his work (an exercise Cary Levine explores in his excellent 2013 Kelley study, Pay For Your Pleasures). In other words, despite Miller’s initial claim about Kelley’s directiveness, he is, in fact, “blurring lines” to draw attention to (much of) his work’s critically overdetermined implications and to the concept of projection itself. This is evident in Educational Complex, particularly when considering, as Miller notes, that the piece was a direct response to the critical misunderstanding of Kelley’s Arena series (1990) as representative of sexual abuse (15-16). Though Kelley stated Educational Complex would “give people what they want,” i.e., work representative of trauma (16), it is done subversively. This playfully aggressive relationship Kelley had to his audience that pushes them into interpretative traps as a kind of pedagogical exercise (a form of “subterfuge” (17)), is what Miller is arguing in the bulk of this section, but not always clearly or consistently.

In Section Two, “Education: Apparatus and Experience,” Miller develops his earlier analysis of the model’s form by working with Kelley’s understanding of the potential tension posed by institutional architecture as an apparatus of social control. To Kelley, educational institutions simultaneously hide trauma within and conspiratorially repress that trauma with their facades. In this heavily scholarly section it is evident that Miller is a professor. He assumes his reader has familiarity with subject formation theory, particularly Althusser’s concepts of ideology and the ideological State apparatus. This may be the case for some, but for a non-academic, broader readership, much of the section reads as a somewhat dry lecture. However, this is understandable, given that the chapter focuses on how Educational Complex was in conversation with 1990s post-structuralism, e.g., that Kelley considered school as “an institution that lies at the intersection between knowledge and power” (29). Establishing the theoretical context of Educational Complex allows Miller to engage in an extended meditation on art school’s ability to function as an apparatus serving to repress experience—what he refers to as Educational Complex’s “greatest stakes” (95).

In Section Three, “I Believe the Children: From the Sublime to the Uncanny,” Miller appeals to a broad readership with his investigation of Kelley’s engagement with conspiracy theory and institutional critique. Miller evaluates Educational Complex as a response to the 1980s mass hysteria surrounding child sexual abuse and repressed memory syndrome, i.e. the belief that “the inability to remember certain events indicates sexual trauma.”  Specifically, Miller analyzes the piece in relation to its “rhetorical fulcrum”: the 1983 McMartin Preschool scandal that Kelley claimed as his inspiration. The McMartin case was an important cultural touchstone for Kelley because, as was later revealed, the “trauma” central to the scandal was largely fantasy (62). Understanding Educational Complex in relation to the McMartin case reveals how in much of his work Kelley both “mimes the victim” (59) and challenges the idea that a memory blockage is “somehow the result of trauma” (14). This section makes clear what was, at times, muddled in the first section, that much of Kelley’s art, particularly Educational Complex, gleefully relishes in furtively inspiring the viewer to (mis)understand it as exemplary of lived trauma. Miller maps how Kelley drew parallels between memory and art as a process of “re-presentation,” meaning, how Kelley drew linkages between repressed memory syndrome and the “retrospective uncanny” of the piece (83).

Miller convincingly stresses that Educational Complex’s conceptual importance cannot be overemphasized. The piece is both subtle and ruthlessly driving in its institutional critique of “education” as a Platonic “utopian scheme” and the basis of social ordering (13). By situating art and education in tandem, Kelley was able to self-reflexively consider how “artworks are bound to present-day principles of social hierarchy” (94). Thus, Educational Complex draws upon the past “to map the ideological confines of the present” (107). Throughout the study Miller discusses other Kelley pieces in addition to Educational Complex, in one sense adulterating the single-study that the book proclaims. However, he contextualizes that work in relation to the eponymous piece and these detours contribute much to his primary analyses, particularly to his claim that Kelley was an artist central to the growing cultural engagement with institutional critique toward the end of the twentieth century. Miller, himself an artist and a friend of Kelley’s until his death in 2012, pays Educational Complex its due, treating its critical insights as considerable, and continually relevant.