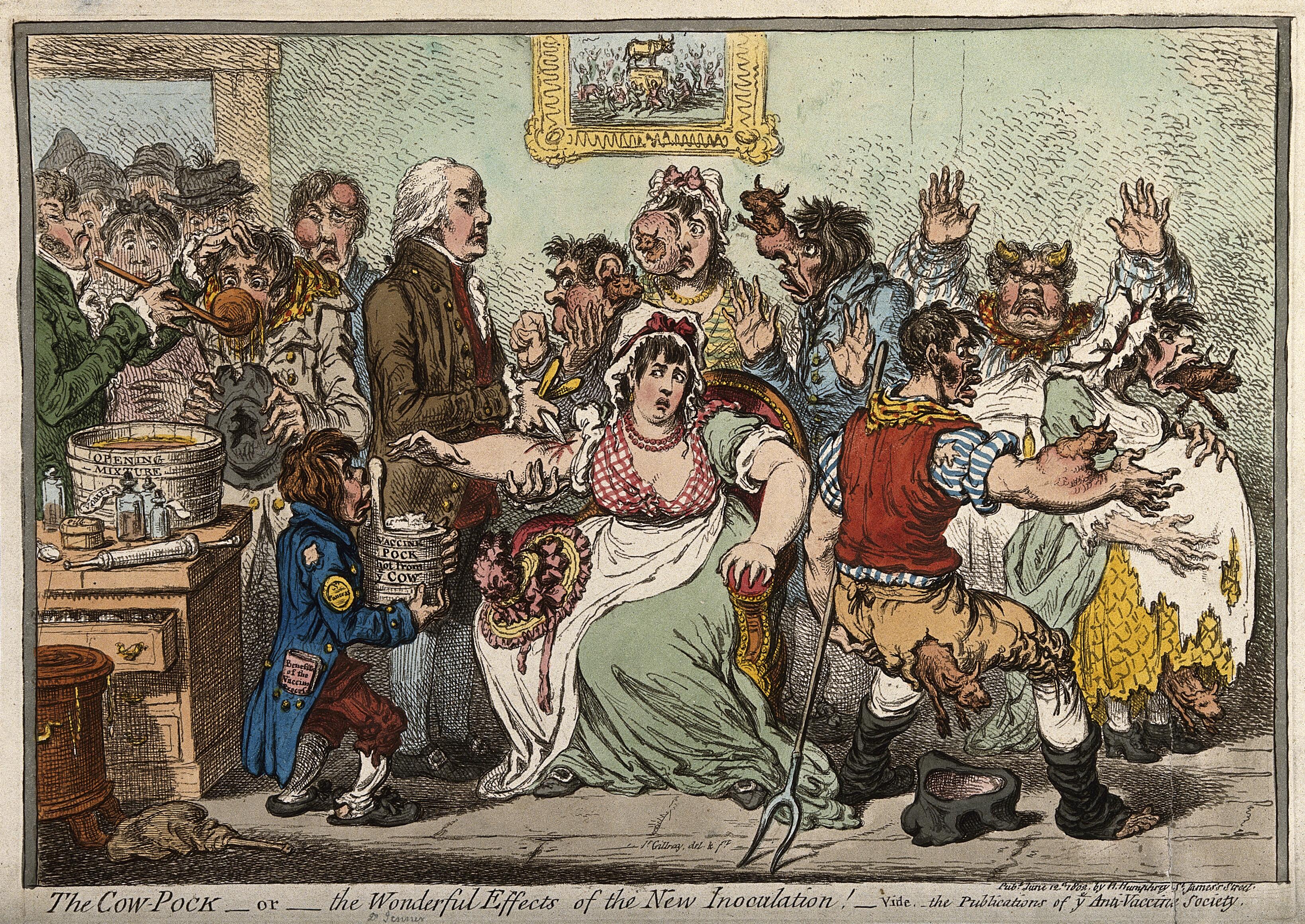 Fig. 1. “The Cow-Pock—or—the Wonderful Effects of the New Inoculation!” [Edward Jenner vaccinating patients in the Smallpox and Inoculation Hospital at St. Pancras: the patients develop features of cows. Coloured etching by J. Gillray, 1802. Wellcome Library no. 11752i]

The natural body meets the body politic in the act of vaccination, where a single needle penetrates both. – Eula Biss, On Immunity: An Inoculation1

In the 1802 colored etching for the Anti-Vaccine Society, “The Cow-Pock—or—the Wonderful Effects of the New Inoculation!,” James Gillray, a political cartoonist, sensationalizes the scene of inoculation. Depicted in the center of the frame is Jenner using his lancet to penetrate the arm of a seated working woman. Surrounding them is a crowd of vaccinated patients who are in various states of bovine transformation – some growing horns and even erupting miniature cows like smallpox buboes from their bodies.

The contemporary anti-vaccination movement first gained momentum in part due to a widely-circulated 1998 paper,2 written by Andrew Wakefield and published in The Lancet, which claimed a connection between the MMR (measles-mumps-rubella) vaccine and autism. Despite the exposure of Wakefield’s unethical distortion of experimental data and the later retraction of the paper by the journal, many, including high-profile celebrities like Jenny McCarthy and Donald Trump, have continued to be public proponents for anti-vaccination. Yet skepticism toward the use and effects of inoculation has a much longer history. Consistently elided in mainstream discussions of vaccination politics is what I will call “inoculation anxiety,” which emerged among both text and images during inoculation’s emergence as a medical technique in the eighteenth century.

Beginning in the 1720s, inoculation entered the English imagination via Mary Wortley Montagu’s witnessing of Turkish variolation, or the deliberate injection of fluid from a smallpox pustule into a non-infected individual to produce an immune response. The technique drew immediate criticism from both lay and elite communities. In 1796, Edward Jenner revised variolation into vaccination by substituting the viral material with cowpox. Immunity thus transformed in the Romantic period from a passive to an active condition3: it could be actively induced by the deliberate introduction of infectious material into the body. Through pamphlets, poetry, essays, and images, pro- and anti-vaccination writers negotiated the safety, validity, and benefits of inoculation. Inoculation proved doubly controversial: in Montagu’s case, for its derivation from Eastern practices, and in Jenner’s case, for its cross-species infection. By the end of the eighteenth century, Jenner’s campaign for nation-wide vaccination also became imbricated with national anxieties surrounding the contagious radicalism that migrated across the channel from France, as well as “Jacobite influenza” circulating within England itself. Medical immunity, from its very origins, was thus always a political issue where the well-being of the English social body was precariously at stake.

Despite the caricature’s heavy-handed suggestion that vaccination blurs the species line between man and animal by literally making the vaccinated into cows, Gillray underscores a very real concern about the lethal effects of vaccination. Many patients, often children, experienced permanent scars and debilitating fevers.  As the anti-vaccination movement reached its peak in the mid-nineteenth century,4 working- and middle-class families critiqued the hypocrisy of state intervention into citizens’ bodies without any responsibility for the undesirable effects of the treatment. Gillray’s representation of Jenner’s flat affect simultaneously invokes a long-tradition of representing medical men as stoic intellectuals but also satirizes a negligent medical establishment just beginning to professionalize. Alongside state-appointed vaccinators and trained medical men were opportunistic quacks who often exploited the lay public’s ignorance and fears. Vaccination, in its early inception, entailed a veritable risk. 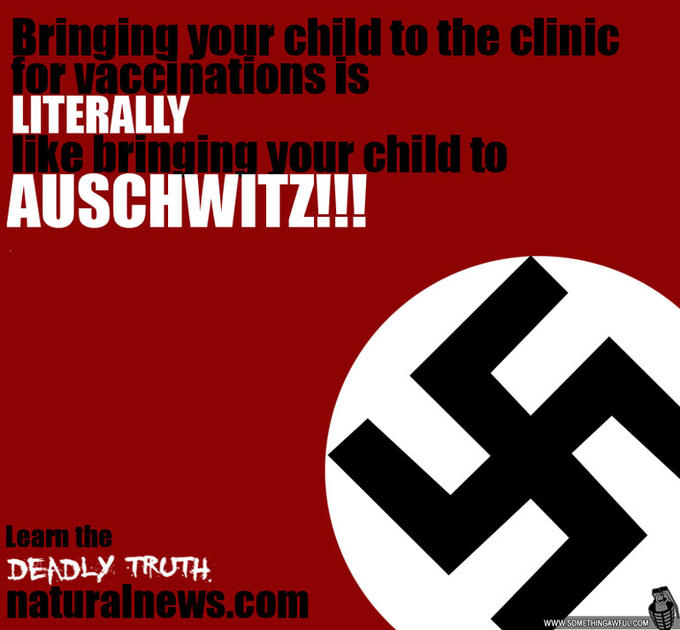 Over two centuries later, in a widely-circulated meme on social media, anti-vaxxers claimed that having children vaccinated was “literally” sending them to Auschwitz, the Nazi death camp. While it is easy to dismiss this meme for its inflammatory rhetoric, I want to focus on the persistent invocation of the figure of the child in anti-vax campaigns. Jenny McCarthy famously detailed on The Oprah Show how “the light went out” of her son’s eyes upon receiving his vaccination. Since Gillray’s time, the precarity of the child was cited by both sides of the vaccination debate. Pro-vaccinators framed children as a critical risk group that could affect herd immunity, while anti-vaccinators underscored their innocence and vulnerability to unnecessarily harmful medical intervention often performed without their consent. Mandatory national vaccination policies in the nineteenth century, to the extent that they led to the violent policing of certain bodies deemed a risk to national health (i.e. the poor, the disabled), follows a logic that Anna Mollow has termed “rehabilitative futurism,”5 in which futurity is imagined as perfectly sanitized of disease and disability. The reference to Nazi Germany is not simply hyperbole; rather, it compares vaccination to Nazi hygienic measures that were justified under the guise of a program of “public health.”

In the current age of biosecurity, anti-vaccination seems far more than mere pseudoscience or religious fundamentalism; it can represent a political stance against the paranoid mode of the state. Images like Gillray’s caricature and anti-vaccination memes are particularly effective in galvanizing individuals precisely because of their contagious reproducibility and hyperbolic tone. Scientific discourse about vaccines, too often inaccessible, becomes flattened in these images into easily consumable scenes of medical disaster. These images work precisely because they powerfully visualize the contingency of vaccination and its effects and make palpable the dangerous consequences of its failure. If anything, anti-vaccination propaganda reminds us that state intervention, especially when framed in terms of public health, is never purely innocent.