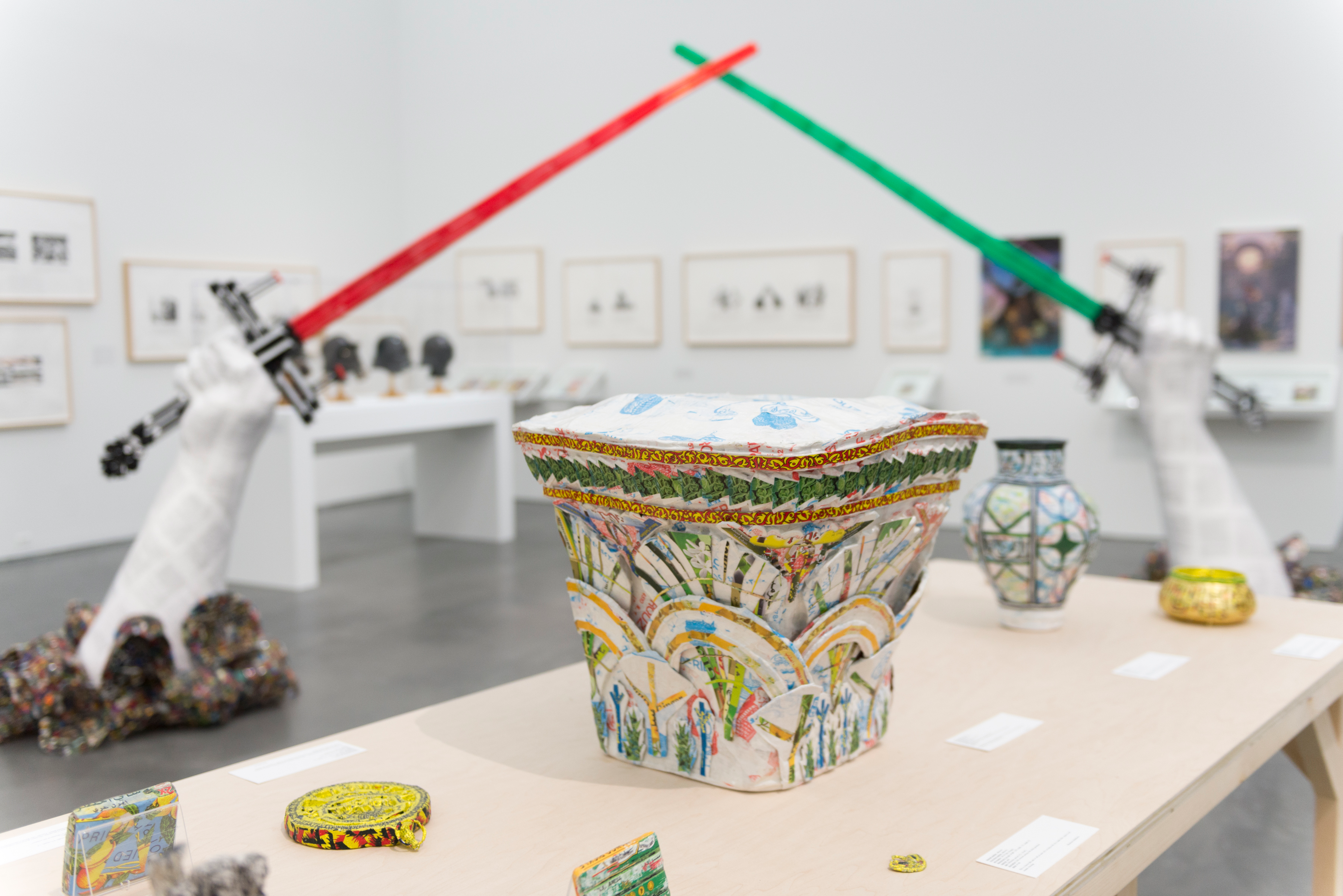 “It bemoans its lost wisdom
There’s nothing left
Its heritage is lost
And one question follows the other…”
—Tarek Eltayeb, “A Hoopoe”1

While heritage has become a subject of sustained interest across disciplines in the last few decades, most studies focus on its economic dimensions, allowing the moral, symbolic, and affective power of heritage to fall to the wayside.2 A recent exhibition at Chicago’s Museum of Contemporary Art, Michael Rakowitz: Backstroke of the West, curated by Dr. Omar Kholeif, gives us a window into how to address this absence, exploring the moral economies of history and heritage, in part, by reconstituting missing, looted, or destroyed artifacts from Iraq. It also builds on the assertion that there still remains a palpable disconnect between the socially constructed “self” and “other,” “us” and “them,” which is examined through themes of consumption, hospitality and hostility, offering visitors an interesting segue into thinking about the “universal” quality of heritage and the alluring power of history.

An overview of Michael Rakowitz’s career, Backstroke of the West operates as an assemblage, composed of small samplings of his life projects. The artist’s careful excavation and attention to conceptual shards of culture throughout his career has caused some to refer to him as a “cultural archaeologist,”3 but Backstroke of the West reveals there is another layer to his work that both confronts and arouses strong sentiments. A significant part of the exhibition space functions as an affective archaeology of history and Iraqi-American relations, the latter being something dear to the artist, who himself is an Iraqi-Jewish American. Rakowitz simultaneously interrogates and reconstitutes “heritage” in the form of new material culture, and “history” in the form of surprising narratives. Fragments of culture and history are transformed in the exhibit and stitched together to give rise to an alternative, artistic heteroglossia.4 This emphasis on transformation and translation makes sense; the exhibit takes its title from a mistranslated, Chinese bootlegged copy of the Revenge of the Sith. In what remains, I draw out some of the affective and symbolic elements in two of the major exhibit pieces to demonstrate how Rakowitz explores history and heritage through an affective, sensuous archaeology. 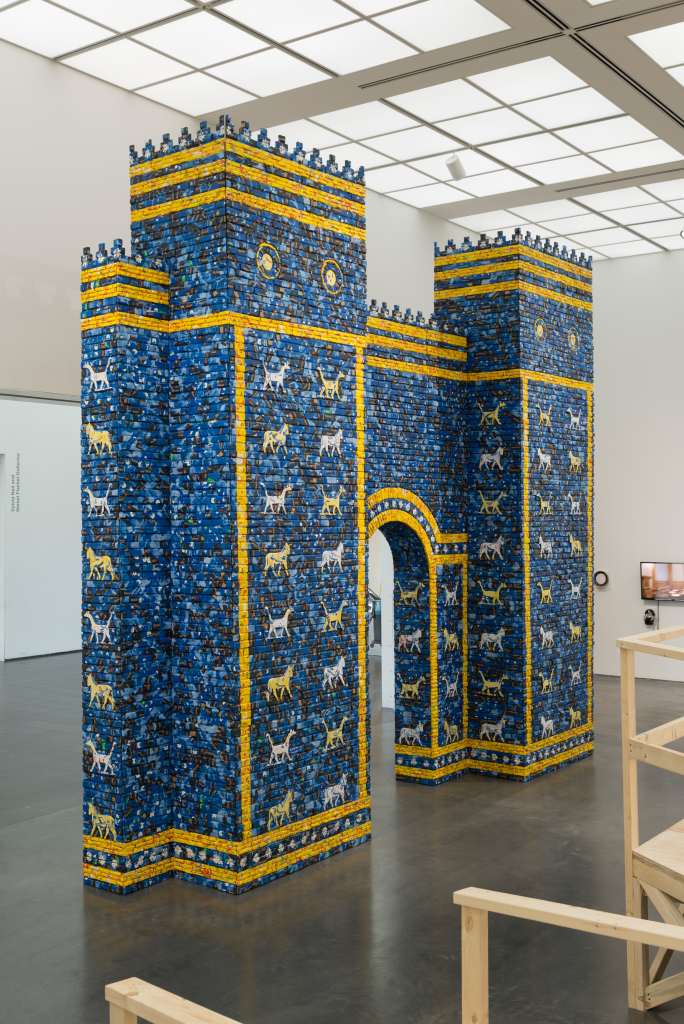 Figure 2 Michael Rakowitz, May the Arrogant Not Prevail, Installation View, Reproduced with permission of Museum of Contemporary Art Chicago.

When entering the exhibition, the visitor immediately encounters May the Arrogant Not Prevail (2010). They either pass through or around this striking recreation of the Ishtar Gate, a famous piece of ancient Babylonian architecture built under Nebuchadnezzar, whose Babylonian name translates roughly to the title of this work. The original Ishtar Gate was a ritualized object—during religious processions, people would symbolically “pass through” the gate on the way to temple. When the Germans excavated the Ishtar Gate, they desperately tried to transport it piece-by-piece back to the Pergamon Museum (where it is still currently on view), but they left sections of the gate behind in Iraq. Missing bricks made on site filled the gaps in order to mimic the original. In this sense, the Pergamon’s Ishtar Gate is already a copy of a sacred artwork, making Rakowitz’s Ishtar Gate—reconstructed from recycled Arabic Pepsi and Lipton cans—a magnificent, imposing copy of a copy. Omar Kholeif asks in the exhibition catalogue whether this object can still possess aura in Walter Benjamin’s sense. After all, despite it not being remade in a ritual context—though one can argue the artistic process is a ritual in and of itself—Rakowitz’s Ishtar Gate is unique and temporally located.5

Indeed, in my experience visitors seemed enchanted not just by the beauty of the Gate but the “bones” and “skin” that hold it together. Building this “heritage object” out of the debris of the Arabic-speaking world from which this Gate was stolen sends a powerful message that is at once political, social, and emotive. One feels awe, but also sadness at the kinds of privilege a resident of Berlin (or Chicago, for that matter) enjoys. This reconstruction of a reconstruction is also purposely incomplete. One can view the plywood skeleton by standing behind the Gate. The inchoate material qualities of the Gate—how it is present in space and time yet still absent in its full form—imbue the Gate with an uncanny feeling, as if it is both present and absent all at once. In other words, the Gate emerges as a spectral figure,6 and one that is quite haunting given its fragmentary state and uncertain geographic location. Is it haunting visitors in Chicago by way of Iraq or by way of Berlin? 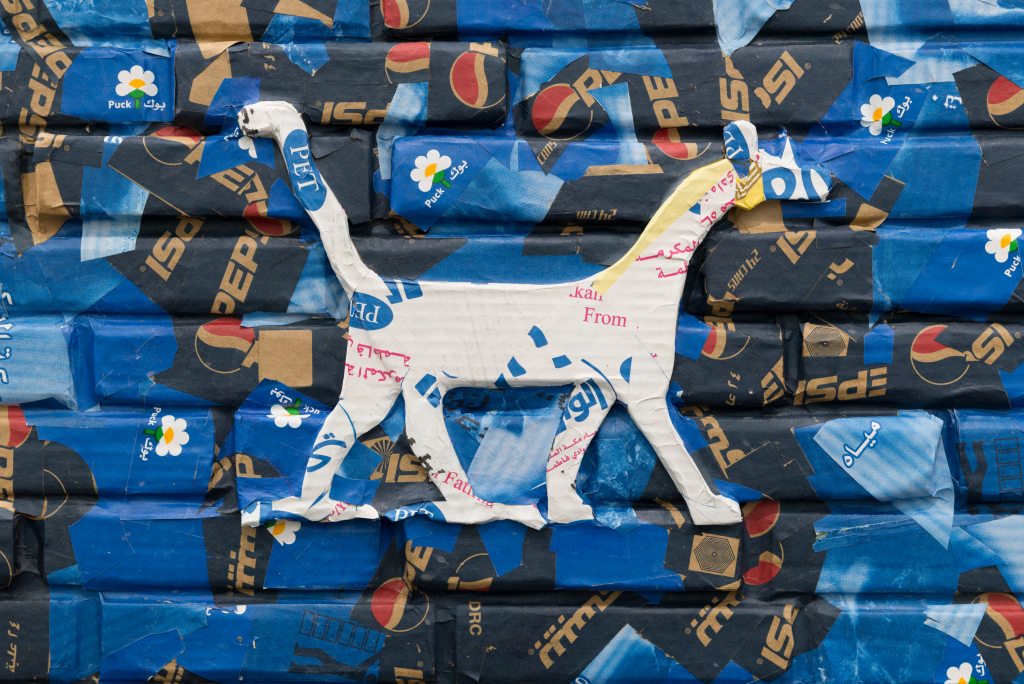 Figure 3 Michael Rakowitz, Detail of May the Arrogant Not Prevail, Reproduced with permission of Museum of Contemporary Art Chicago.

Moving past the gate to the left, the visitor comes across a culinary heritage corner that engages with food and hospitality through a multimedia installation. Entitled Return (2004), it details how Iraqi date syrup came to circumnavigate the UN sanctions that have been placed upon it in sometimes effective, other times ineffective, ways. The symbolic importance of dates in Iraqi culture is emphasized visually by the living date trees that both flank Return and cast shadows over visitors who sit on the provided bench and watch the installation’s video. Enticing visitors further still is a “timeline” on the wall that traces the ancient and modern history of dates. Return is a social life of dates, bringing sovereignty into conversation with Rakowitz’s notions of “rejection” and “consumption.” Rakowitz sees “rejection” instantiated through border control and other invented manifestations of security in the era of the nation-state. “Consumption” he takes as both literal and, even more importantly, in the capitalist sense. Given these Marxist undertones, I wonder if one could replace (or translate) Rakowitz’s “rejection” with “alienation.” Dates, for Rakowitz, signify a particular form of personhood even as they are commodities, a personhood that is distinctly Iraqi, becoming ever more estranged through its troubled efforts to “escape” Iraq and enter the markets and stores of the US before becoming one again through a sensuous, emotional reunion with Iraqi families.

In each of these exhibition elements, we see how Rakowitz works to disrupt power and suture history through sensuous, affective engagement and the haunting quality of “reconstitution.” While Rakowitz characterizes this process as translation, the semiotic concept of transduction might be more appropriate. As Webb Keane explains, transduction is “the act of transforming something across semiotic modalities in order to produce or otherwise have effects on power.”7 In every instance of this exhibit, and thus throughout most of Rakowitz’s life, his art has engaged in the act of transduction and the tracing of power in historical narratives.8 Giving new life to missing objects, creating surrogates for humans who have been exiled—this is art that unsettles, and is especially poignant given the geopolitics of the 21st century. Not only is the impact of war and conflict in the Middle East still reverberating in the wake of the United States’ current presidency, but we are also witnesses to renewed struggles for human rights and self-determination. The refugee crisis, Standing Rock, and the Black Lives Matter movement can all interface in interesting ways with this exhibition, which challenges the previously held social and political assumptions of visitors through its affective engagement with critical and tense histories. The wounds of the Iraqi war as well as the scars of other conflicts are essentially lessons in power, apathy, and hate. Conversely, the reconstitution of objects that rests at the heart of this exhibition adeptly turns these lessons on their head through a sensuous experience that calls for empathy and critical thinking. When the threads that stitch this work together are laid bare for all to see, what we are confronted with is the assertion that in between hospitality and hostility, within the interstices of two opposing ends, humans find a common ground.