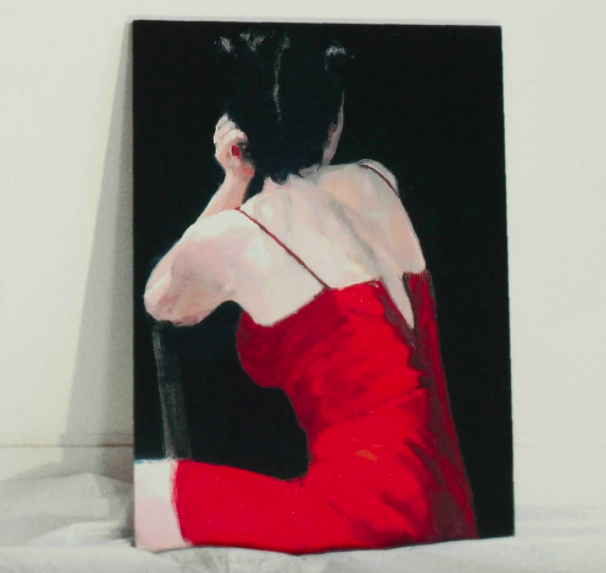 “The beautiful woman, […] was being looked at by someone outside the painting, a spectator who seemed to be standing just where I was standing”

-Siri Hustvedt, What I Loved1

Attesting to the need for a reappraisal of the way that literature mishandles the visual object, Siri Hustvedt’s What I Loved—a novel of love, loss, and art— consciously acknowledges the looking subject in an attempt to rewrite traditionally gendered ways of seeing. Scopophilic and voyeuristic in nature, the looking subject subdues the looked at object, subjugating it and compounding its “otherness.” John Berger argues that, like a woman, the visual is “born within an allotted and confined space, into the keeping of men” and it is from this space that What I Loved aims to free the object and in turn our way of looking.2 However, whilst Hustvedt’s novel makes significant inroads into a reappraisal of the act of seeing, I want to suggest that What I Loved ultimately conforms to the very conventions that it rejects and, to reapply the words of Edward Snow, “become[s] an unwitting agent of the very forces of surveillance it wishes to oppose.”3

As with Hustvedt’s first two novels—The Blindfold (1992) and The Enchantment of Lily Dahl (1996)—What I Loved opens with an act intrusive voyeurism, as the novel’s aged narrator, Leo Hertzberg, first reads the private letters of his dead friend and artist, Bill Wechsler, before recalling and setting down the story of their 25-year friendship and the intertwining of their lives and families. As Hertzberg recalls, whilst working as an art historian at Colombia, he discovered Weschler’s relatively unknown work and was subsequently central to his ascent through the New York art scene. Throughout the novel, Hertzberg’s recollections—of his life, his friendship with Wechsler, the death of Hertzberg’s son, the failure of both men’s marriages, and Wechsler’s eventual death—are repeatedly punctuated by confrontations with visual objects, as Hertzberg encounter’s Wechsler’s art in various, and increasingly invasive, ways.

Directly assessing the ekphrastic discourse found at the heart of What I Loved, Asbjorn Gronstad unconvincingly declares that Hustvedt’s novel delineates the “twin acts of describing and looking” to such an extent that “the looked at” finally obtains primacy over the “looking.”4 Inviting us to observe the life of Leo Hertzberg, What I Loved focuses on the friendship between an artist and an art historian, and their bohemian life in New York’s art world, with the expressed aim of directing our readerly gaze upon the act of seeing.

As the novel’s narrator and primary voyeur, Hertzberg represents a double subjugation of the “looked at” object. Echoing James Heffernan’s exposition of ekphrasis as “the verbal representation of visual representation,” the narrative voice twice subdues the visual, first through Hertzberg’s gaze and secondly through his translation of the visual into language.5 Hustvedt’s imagined ekphrases express a complex oscillation between distance and proximity, for as the desiring gaze twice subdues the looked at object—first by looking and then by writing about looking—it is twice distanced from the very object it desires. Unsubtly establishing the desire to subjugate the female visual image, the novel’s first ekphrastic encounter describes Bill Wechsler’s Self-Portrait:

It was a large picture, about six feet high and eight feet long, that showed a young woman lying on the floor in an empty room. She was propped up on one elbow, and she seemed to be looking at something beyond the edge of the painting. Brilliant light streamed into the room from that side of the canvas and illuminated her face and chest.6

However, whilst the young woman is illuminated from one side, a shadow rises up from the bottom edge of the painting, falling across her bare thighs. Acknowledging and ultimately dictating the viewing perspective, the shadow in Self-Portrait reveals a self-reflexive awareness of the painting’s own “objectness,” considering “the surveyor and the surveyed” within itself.7

For a moment I mistook the shadow for my own, but then I understood that the artist had included it in the work. The beautiful woman […] was being looked at by someone outside the painting, a spectator who seemed to be standing just where I was standing when I noticed the darkness that fell over her belly and her thighs.8

Here, the shadow in the portrait seeks to violently interrupt the male gaze, by forcing the surveyor to acknowledge that he is looking. Yet Hertzberg’s scopophilic contemplation countermands the painting’s attempts to disrupt the male gaze, and his subsequent sexual response to the painting—”On that afternoon, however, we made love because of the painting”—only acts to solidify his role as the determined male spectator.9 Although, Hustvedt problematizes the gendered relationship between Hertzberg and the painting, that a man painted Self-Portrait does not seem to affect the sexual response it provokes.

Throughout the novel, repeated encounters with art objects (Hustvedt’s notional ekphrases) ask us to reconsider the act of looking, as Wechsler’s artwork dictates Hertzberg’s spectatorial position in increasingly manifest ways. The “hysteria pieces” require Hertzberg to “peek” through small doors that, unlike Self-Portrait which merely implied the viewing position, physically manipulate Hertzberg as the looking subject.10 Recalling Laura Mulvey’s theory of the male gaze—that visual representation asserts an underlying asymmetry, as the male gaze almost universally overpowers the female—Hustvedt explores the power that the visual object has over the viewing male, rebalancing the gendered dynamics of the visual experience.11 Consequently, as Berger contends, the female first looks upon herself as a man would, only to “re-present” herself accordingly.12 The self-reflexivity of the female gaze is clearly present in Wechsler’s art, which asserts the possibility of the object’s agency, in influencing, or even manipulating the male onlooker.

Hustvedt’s reappraisal of the male gaze seemingly culminates in Wechsler’s 101 Doors installation, which involves Hertzberg climbing inside the artwork. Forced to “go inside and close the door” behind him, Hertzberg explores an instance in which the gazing subject is figuratively subsumed into the “passive” object. In doing so, Hertzberg’s experience seemingly provides the climactic reversal of the male/female visual dynamic which the novel drives towards.13 Hertzberg, however, remains determinedly and frustratingly unchanged by this experience. At the centre of What I Loved there is a fundamental incongruity in what the novel seems to be attempting to achieve and what the innately masculine, gazing narrative of Hertzberg actually accomplishes. Whilst Hustvedt’s may intend to refigure the way in which we perceive and interact with the visual, doing so proves difficult when Hertzberg’s own narrative refuses to submit to the same requirements.

Throughout the novel, Hertzberg’s desire remains one of needing to own and control what he sees. Moving beyond the subjugating act of viewing the visual object, Hertzberg purchases Wechsler’s work, confirming this desire, which is later affirmed by the revelation of his hidden and private collection of photos, drawings, and trinkets. Hertzberg’s narration vividly recalls moments in his life and asks us to experience the narrative as a moving visual text, however the effect produced is something closer to his desk draw filled with images than the expansive, visual landscape that Gronstad posits.14  Gronstad suggests that the “close attention [Hertzberg] pays to the development of Weschler’s work gives us biography as ekphrasis”, and whilst he concludes that this displays Hustvedt’s desire to untether the visual in language, the visual object is always contained by Hertzberg’s gaze driven narrative. Photographically depicted and enticingly vibrant, Hertzberg’s descriptive recollections tempt our readerly gaze to see through language to the visual realm beyond and into an exhibition of images. However, Hustvedt and Gronstad both fail to see that the innate exhibitionism of What I Loved acts as a natural counterpart to the very voyeuristic gaze that it attempts to rewrite. Whereas the voyeuristic male desires to see and obtain the visual object, the object that acknowledges this truth (as Wechsler’s Self-Portrait does) desires to exhibit itself. Like Self-Portrait, in deliberately acknowledging the reader as voyeur, What I Loved does not reform our gaze but offers it an exhibitionistic feast, which is readily devoured.

Placing our readerly gaze near, but not wholly aligned with Hertzberg’s own position, enables us to see what he sees. But more importantly, this also reveals how he sees; the novel, like Wechsler’s art, is instilled with a conscious and self-reflexive awareness of its own textual gaze. Whilst for Hertzberg the object of his scopophilic desire is always the visual image, for the reader the focus of our looking is always twofold. Hertzberg’s first-person narrative ensures we look upon the visual object through his eyes, yet also makes sure that our gaze is also upon him in the act of looking. What Wechsler’s art doesn’t achieve for Hertzberg, Hustvedt’s novel arguably achieves for the reader, a conclusion that Gronstad would undoubtedly support. By attempting to lay bare the visual image in language, Hustvedt suggests the possibility of an ungendered relationship between visual image and language. However, understanding ekphrasis as Hertzberg’s desire to articulate the visual object, it can be argued that that the visual-textual bond can never overcome the gendered act of desire. In Lacan: Reframed, Steven Levine writes that “[b]ecause language can only partially express the corporeal urgency of the male subject’s desire, it […] will inevitably disclose a realm of dissatisfaction,” a dissatisfaction that can only be satiated by the object of desire. Ekphrasis intimates a direct link between the visual object and subject, but in reality insists that in language the visual object always remains an objet petit a, the unattainable object of our desire.15 Despite Hustvedt’s success in focusing the readers gaze upon the act of seeing, that act remains firmly fixed in the realm of language, and whilst the scope of What I Loved may strive to achieve a new uninhibited, ungendered way of seeing in language, language always safeguards its authority over the visual.

Hustvedt’s deconstructing reappraisal of the ekphrastic, male gaze in What I Loved attempts to address the power asymmetry at the heart of looking and being looked at, however what she achieves is a refocusing of our readerly gaze onto the act of seeing rather than the female object. Instead of dismantling and reconstructing the traditional ekphrastic form, Hustvedt’s novel becomes what can only be described as a meta-visual text, a way of writing that transfers our gaze, but ensures that it continues to conform to the conventions of a masculine way of looking.