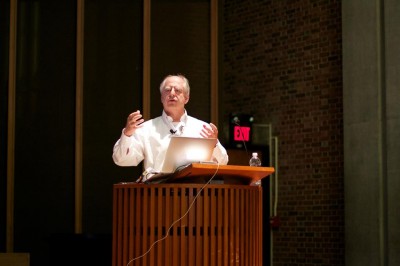 InVisible Culture has partnered with the English Department to present a digital extension of William Kentridge’s visit to the University of Rochester in September of 2013. Kentridge, the renowned South African artist, filmmaker, and theater and opera director, was this year’s Distinguished Visitor in the Humanities at the University of Rochester. His visit comprised of four main events:

Wednesday, 9/18 at 8 pm at the Dryden Theater – a screening of the entire series of Kentridge’s works of experimental animation, “Drawings for Projection,” followed by a talk with the artist.

Thursday, 9/19, at 9:30 AM, in the Welles-Browne Room, Rush Rhees Library – a conversation with William Kentridge, led by Nigel Maister, about his decades-long career as a director of theater and opera.

Thursday, 9/19 at 1:30 pm, in the Gowen Room, Wilson Commons – a panel discussion, led by Leora Maltz-Leca, focusing on Kentridge’s work in visual arts and film, with some focus on its South African context.1

Thursday, 9/19 at 4:00 pm, at the Interfaith Chapel – a public lecture initially entitled, “Everyone Their Own Projector,” but which was ultimately: “Second Hand Reading.”

Below, you will find four videos each documenting these events. We invite you to watch these, and to keep an eye on our blog for additional material regarding Kentridge and his visit, which we will release in the coming months. This will include a number of reflective pieces written by scholars who participated in the events, as well as a short video essay on William Kentridge produced by IVC.

William Kentridge’s work has been seen in museums and galleries around the world since the 1990s, including Documenta in Kassel, Germany (1997, 2003, 2012), the Museum of Modern Art in New York (1998, at Theatre de la Monnaie in Brussels, Festival d’Aix, and in 2011 at La Scala in Milan. He directed Shostakovich’s The Nose for the Met Opera in New York in 2010 (the production traveled to Festival d’Aix and to Lyon in 2011), to coincide with a major exhibition at MoMA.

The visit of William Kentridge to the University of Rochester was organized by Professor Joel Burges and Professor Kenneth Gross in the English Department. The event was sponsored by the Office of the President and the College of Arts and Sciences, with the collaboration of the Departments of English and Art and Art History, the Film and Media Studies Program, the Graduate Program in Visual and Cultural Studies, the George Eastman House International Museum of Photography and Film, the River Campus Libraries, and the University of Rochester Humanities Project. The poster for the event (in slideshow above) was designed by Renee Heininger. Photographs of Kentridge’s visit (also above) were taken by Joel Neville Anderson. Permission was received from Kentridge’s studio for all relevant image rights, and for videotaping the events.