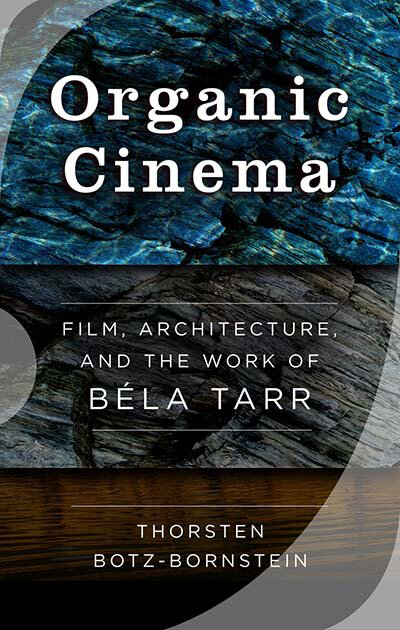 Thorsten Botz-Bornstein’s Organic Cinema: Film, Architecture, and the Work of Béla Tarr features an impressive multidisciplinary examination of the concept of organicism through a complex yet sophisticated web of philosophical, aesthetic, architectural and cinematic examples. For Botz-Bornstein, organicism grates up against mainstream or otherwise popular philosophical and aesthetic theories, offering a divergent path away from the post-structuralist, deconstructive, leftist ideologiekritik, as well as the “competition of different universalisms,” ranging from Islamic fundamentalism to western capitalism, which dominate our contemporary social and aesthetic paradigm (2-3). Filmmakers such as Béla Tarr and Andrei Tarkovsky, architects like Frank Lloyd Wright and Imre Makovecz, writers such as Lázló Krasznahorkai and philosophers such as Gilles Deleuze and Henri Bergson, are the exemplars of organic thinking according to Botz-Bornstein, who highlights their theoretical and aesthetic import as advocates of contemplation, slowness, and ultimately the cosmic thought linking the relative to the universal, or, as Botz-Bornstein asserts, “[o]rganicism is born out of the confrontation between the absolute and the relative” (97).

Botz-Bornstein begins his book by outlining the affinities and differences between these thinkers in particular, and between cinema, architecture, and literature more generally. Botz-Bornstein locates what can be described as the intrinsic perceptual conjunction between cinema and architecture, commenting on the difference between considering architectural spaces as “plots” rather than “sites” — the former having the connotation of a storyline embedded in the space itself, while the latter “become[s] increasingly assimilated into the capitalist logic of regeneration and value creation” (6). The book’s second chapter focuses entirely on the Central European paradigm out of which Makovecz, Krasznahorkai, and Tarr produced their works.  Botz-Bornstein identifies Hungarian architecture, literature, and cinema as offering radical resistance toward both the capitalist logic, as well as the failure of communism, commenting on how Hungarian aesthetics represent a “dynamic resignation” or “melancholy of resistance” which grew out of necessity from the region being caught in between the brutality of both communism and capitalism (41).

A large majority of Organic Cinema is dedicated to an extended critique of science and mathematics, which the author deems to be the antithesis of an organic, cosmic understanding of reality. The organic is “hidden for science but can be made visible … by philosophers and artists,” writes Botz-Bornstein (57). Contra to mathematical realism which contributes to the idea that “[t]he world as a lived, coherent place that simply ‘makes sense’ is getting lost,” organic philosophy, “[d]espite its mystical temptations… seems willing to retrieve a ‘common sense’ perspective in a world that is basically unstructured” (62). In this way, Botz-Bornstein opts for thinkers like Goethe over Descartes, ideas of nature over calculation, and for organic architecture over the Vitruvian humanist metric of the body in architectural space. Thus, the aim of organicism is toward “[m]eaningful (“organic”) totalities,” rather than “networks” as derived and deduced from abstract science (63).

Botz-Bornstein dedicates a large part of his text on an analysis of musical theology, citing in particular Andreas Werckmeister’s twelve tone system of harmony, asking, “[c]an math be the arbiter of beauty, or is there something more fundamental about beauty, which the human ear can hear which logic and math cannot grasp?” (100). This question frames the middle section of the book, which focuses above all on Krasznahorkai’s character Eszter from The Meloncholy of Resistance (1989) and Tarr’s Werckmeister Harmonies (2000), and his attempt to locate organic harmonies while not resorting to the Werckmeisterian tonal metric of mathematical certainty. As Botz-Bornstein observes, “[f]or Eszter, reality (real music) and truth do exist, not in the form of arbitrary cultural, mathematical, and humanist constructions, but rather cosmically or ‘in reality’” (120). Eszter’s project, thus, is akin to the project of organicism more generally, insofar as it bases math on (the natural harmonies of) music, and not the other way around. As Botz-Bornstein puts it, “Eszter’s ‘deconstruction’ of humanist universalism leads to an organic world in which individual elements are ‘cosmically’ justified,” demonstrating how organic thought does not seek to organize the universal into mathematical formulae, but rather shift attention to the “relative” via the individual mediated by a cosmic harmony (120). According to Botz-Bornstein, this mediation is paralleled in both Makovecz’s notion that organic architecture bring the “Earth and Sky” together, and Valuska’s dance in the opening scene of Tarr’s Werckmeister Harmonies, in which the character orchestrates a cosmic dance with bodies orbiting around one another for an extendedly long take (167).

Botz-Bornstein relates Eszter’s pursuit of the natural harmony in music to Andre Bazin’s championing of neorealism in film theory, which serves “to grasp reality ‘out there’ by moving out of the studio, restricting the script, and being spontaneous” (121).1 Without the strictures of the script, studio, or cinematic temporalities ushered in via editing and narrative conventions, Botz-Bornstein isolates the materiality of rhythm in Tarr’s cinema; Tarr’s long takes do not offer transcendence or a spiritual awakening of matter as with Tarkovsky, but offer immanence instead, implicating the viewer into the cosmic harmony of universal space without recourse to time or editing. Organicism is therefore not constructivist as in Eisenstein’s dramaturgy, nor deconstructivist as with Derrida, but rather an unconditioned whole which one can become aware of as the natural order through works such as those belonging to Tarr, Makovecz, and Krasznahorkai. Botz-Bornstein concludes that “[t]he main tool for obtaining an organic space in cinema is the long take, which can transform space into a coherent and respectable entity…” (179).

Organic Cinema is an extremely dense text, rich with philosophical, aesthetic, filmic, and musicological insights. The book’s depth and breadth are certainly impressive, offering a valuable — even audacious — contribution to film theory and architectural theory. Botz-Bornstein is at his best when he makes the following radical connections between architecture, cinema and musical theology, as he describes Le Corbusier to be the “Eisenstein of architecture” and the “Werckmeister of architectural theory” (199). In this way and many others, Organic Cinema contributes to the evermore burgeoning field in which architectural theory and film are considered together.2 However, Botz-Bornstein’s book is perhaps the most philosophically endowed on this front, featuring a litany of familiar European voices, from Kant and Schelling to Lukacs and Wittgenstein, Freud, Derrida and others. Furthermore, although not explicit in the book, Botz-Bornstein implicitly contributes to the very recent “speculative realist” school of thought, most notably echoing Jane Bennett’s return to vital materialism and Bergson’s élan vital in her work Vibrant Matter.3 Organic Cinema resuscitates the philosophical considerations of contemplation, patience, nature and the cosmos once thought to be outdated, and in so doing, successfully illuminates organic philosophy, architecture, and cinema as radical means of resistance against contemporary trends of spectacle architecture and fast-paced, action cinema.