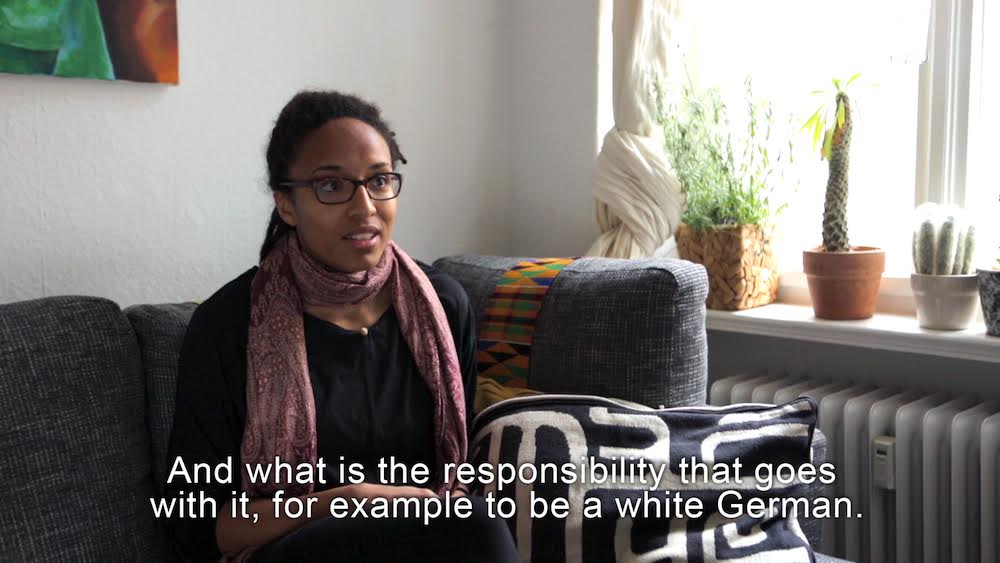 Where are you really from? Woher kommst du wirklich?
I have always said Negerkuss. I am not a racist.
Ich habe schon immer Negerkuss gesagt. Ich bin kein Rassist.

Statements such as these comprise a large part of the collective experience shared by a number of people of color living in contemporary Germany, both in the former East and West. This complex and unfolding history formed the impetus for my video work Past, Present, Tense which observes genealogies and everyday realities of racism in Germany, from the fall of the Berlin Wall until the present day. The video work traces the political transition from the German Democratic Republic into current day Germany, a time during which many “contract workers” from Eastern Block countries (most notably from North Vietnam) who remained in the newly unified country became the target of rampant xenophobic pogroms, in particular Rostock-Lichtenhagn and Hoyerswerda.1

While much of the country was in celebration of  the unification and the fall of the Berlin Wall, homes for asylum seekers were torched and people of color were subjected to racial violence. This gross margin between those with and without agency in times of political upheaval rendered polarized experiences invisible to many who remain apathetic and oblivious to the realities of being non-white in Europe. This history finds an eerie resonance in present day Berlin where a fluctuating population of international white hipsters remains largely aloof to the geopolitical pasts and everyday realities of an evermore rightwing affirming Europe.

The protagonists in the video work, mostly Germans of color, are interviewed within familiar settings of their homes. They recall how their own education failed to recognize and address German colonialism, the 1990 pogroms across Germany and the fraught history of multiculturalism, contributing to a cultural amnesia where past tragedy is all but forgotten in the present. At a time when massive right wing tendencies threaten and repel democratic institutions on all levels, the video work poses critical questions on how to define the borders of European identity beyond ethnic belongings and on how to reckon with white privilege and responsibility amid ongoing global shifts and local transformations.

In retrospect, the making of Past, Present Tense predates the election of Donald Trump, Brexit, and the “refugee crisis” in Europe. Yet, racial indifference and xenophobic tensions are on the rise despite historical tragedies that seem to prevail out of a growing fear of “the other”, revealing a subconscious resistance to accept anything that deviates from a fictitious understanding of what it means to be “normal”.