On a recent morning as I browsed through my Twitter home feed, I noticed some intriguing buzz about using the iPhone Siri function to “see which plane is flying overhead.” 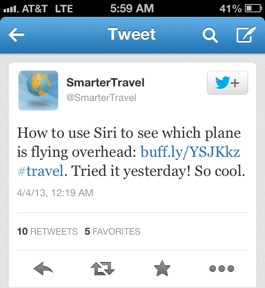 I’ve been thinking about this common experience lately: when you notice an airliner in the sky. But I am less interested in identifying the specific planes and their mapped lines of flight, and more curious about the feelings and sensations that such sightings produce, if only for an instant. Hiraki Sawa’s video artwork Dwelling (2002) considers this experience in uncanny ways—ways worth lingering on, if not determining precisely à la Siri.

Dwelling begins outside an ordinary apartment. We approach; we enter and ascend a staircase.1 At first, upon entering, everything seems stunningly ordinary; it’s just a plain apartment. Suddenly we see airplanes on the floor. Or is it a taxiway? From the outset, Sawa plays with familiar perceptions of environment, the interior-exterior divide, spatial logic and ground. Next, we see a few planes on a small table. Then a still shot of a bed, stark white sheets and cover pulled back. Domestic and transit things commingle, if at unexpected scales.

The scene cuts to a carpeted floor with jetliners parked in front of shelves full of what appear to be LPs. Then, unbelievably, before our eyes, one plane takes off—it moves forward and arcs up, right off the carpet. Another plane takes off from the bed. Back on the small table, multiple aircraft taxi, take off, and land.2 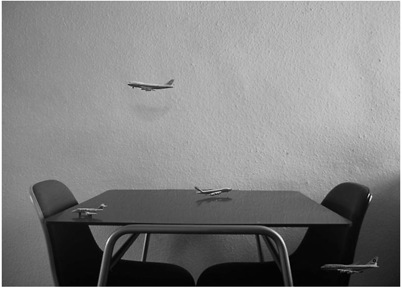 Soon, planes are zooming around the room; they fly in and out of a door barely ajar. These are model airplanes—little toy jets yet realistic in their forms, precise lines of flight, and their shadows on the carpet below. Accompanying the panoply we hear audible jet engine roars; shrieks of turbine fans fade in and out as the planes enter and leave the frame. Many planes soar at what appears to be cruising altitude, flying in dizzyingly close proximity to one another through the apartment kitchen. A plane lands on the counter and taxis to a stop. An espresso machine nearby eerily resembles an air traffic control tower. Three planes fly past a washing machine. Planes line up on final approach before landing: planes barely miss one another and planes fly directly over me, or at least over my video-eye vantage point. A quiet cacophony of planes, they pass in the hallways and soar through still domestic space. Is this really even an apartment? On the floor by the bed there appears to be an entire airfield full of planes, lined up and ready for flight. 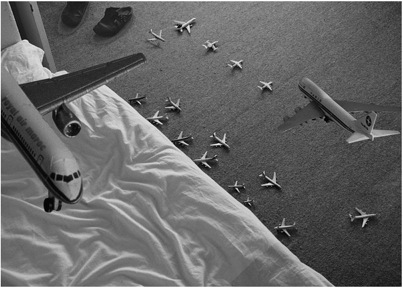 Outside one of the apartment windows, we see clouds race by in the actual sky. Looking up from the carpeted ground, a light bulb becomes a weird cloud and planes trace contrails in the ceiling material. 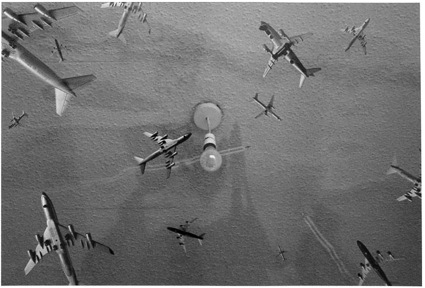 The final shot of the video shows a full-scale jetliner outside the apartment window in the distance, on its approach to land at an airport somewhere near but beyond the horizon.

What exactly is going on here? Hiraki Sawa has converted an interior living space into a hyper-reality replete with off-scale yet familiar flying objects. Dwelling warps expectations of big and small and collapses operative concepts of inside and outside. But Dwelling also seems to ask the viewer to consider what happens to perceived ordinary space when you add airplanes—typically large-scale objects—flying around the confined space of a small apartment.

Once, while walking through the meadow in front of my parents’ house in northern Michigan, I saw a small plane out of the corner of my eye, and it looked like it was in a stall, falling vertiginously. Only when I turned to look, it was a Marsh Hawk plummeting after its prey. I was ready for it to be a plane, though—I was primed for a plane sighting. Years later, I remember camping in the so-called wilderness of Arizona, and hearing the muffled thunder of planes far overhead throughout the still desert night. A discontiguous moment? Perhaps not. To rephrase Wallace Stevens, a canyon and an Airbus are one. And rocks are another kind of furniture. In Davis, California, where I lived for a while, gray-green C5 Galaxy cargo planes would float over town in what looked like slow motion on their descent toward Travis Air Force Base. These planes had a strange effect on everything on the ground: speed and size was distorted, and a small-town community tarried with airborne militarized force.

These days, I feel ambivalent about the F16s that regularly tear open the sky over my home in New Orleans. They frighten me yet they also demand a kind of acute (if brief) attention, if not awe. Perhaps these sightings suggest a contemporary shift in that time worn aesthetic category of the sublime. In Dwelling, Hiraki Sawa seems to be getting at a compelling new world experience, a perceptual event that I call plane sighting. Plane sighting is not the same as plane spotting—for the latter is about strategic observation; trained perception involving naming, categorizing, and collecting. Plane spotting is an activity that generally focuses on the make and model of aircraft, whether on the ground or in the sky. It is a form of recreation, a pastime—even a form of natural history in the lineage of Linnaeus. Plane spotting is concerned with seeing airplanes and fitting them into a neat and tidy epistemological framework.

Plane sighting, on the other hand, is an affective experience—not always pleasant but always, when it happens, unavoidable in terms of what it evokes, even when it’s confused or uncertain. Plane sighting involves those brief and common glimpses of aircraft in the sky, planes that can quickly pass beyond the horizon of perception or linger there for a few weird seconds. It’s about seeing uninteresting planes doing entirely expected things. Plane sighting is fleeting: it eludes control and perceptual grasp. It’s that glint of metal in the sky or a vague drone/thunder/roar somewhere off to the west and above. It’s almost sublime—almost. But contrails fade fast, or waft into ambiguous stripes across the sky. And as Sawa relentlessly insists, plane sighting is oddly quotidian. That is, plane sighting is inextricably linked with our washing machines and coffee pots, our shoes and our bathroom sinks. 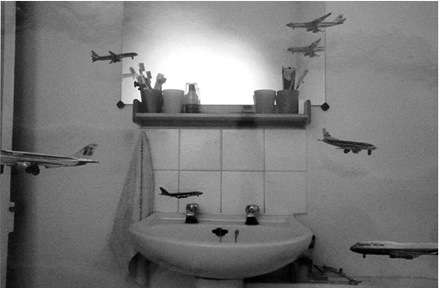 By saturating an ordinary domestic space with ordinary planes, Hiraki Sawa reminds us that such planes already saturate our worldview. Yet at the same time, acute or critical plane sighting could, perhaps, remind us to notice our surroundings and to regard scalar distinctions: a cypress tree over there; a car with a bad muffler one block over; an anthill below me, teeming with ants; a Delta Airlines 757 on final approach. A broken bottle there. Another human here, communicating.

It’s strange to think that ordinary airplanes in the sky could draw our attention to the profound thingliness of things. But Dwelling seems to suggest that plane sighting might have such potential. Residual contrails turning into zigzag puffs. A low commuter plane with blinking lights at dusk. I live on a planet, somewhere between ground and sky—and a part of both at once.