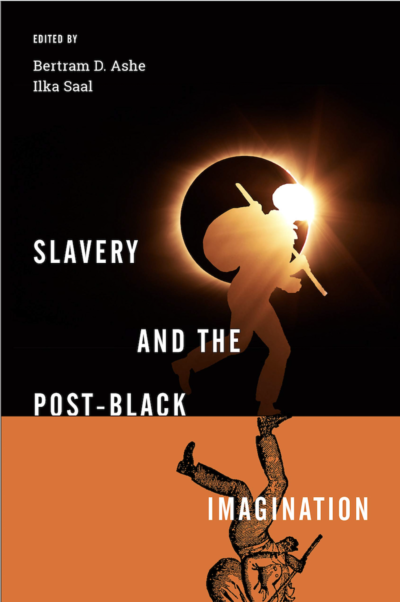 Slavery and the Post-Black Imagination (hereafter SPBI) brings together an exciting mix of texts, scholars, and critical apertures to identify the post-black valences in representations of slavery across different mediums. Editors Bertram D. Ashe and Ilka Saal, along with other scholars, understand post-blackness as indicative of a set of aesthetic criteria as well as a post-civil rights movement generational feeling. Distinct from “post-racial,” a concept ill-favored by the editors that suggests society has moved past race, Saal and Ashe understand post-blackness in visual artists Thelma Golden and Glenn Ligon’s coinage of the term as a “shorthand for resisting narrow definitions of African American identity and for expressing a profound interest in ‘redefining complex notions of blackness’” (6). SPBI engages well the spirit of evolution and multiplicity at the heart of post-blackness as the contributing authors explore texts that abscond from historical or accepted mythologies, depart into the grotesque, and pursue highly satirical modes.1 The editors’ stated goal to gesture towards the “structure of feeling” of artists who have come of age after the civil rights movement also prevents post-blackness from becoming narrowly defined, a point that resonates with Margo Natalie Crawford’s analysis of post-blackness and the Black Arts Movement.2 By focusing on texts that address slavery, the authors demonstrate how the post-black lens provides tools for troubling identity categories and accepted narratives within ongoing issues of political disenfranchisement, structural violence, and pervasive anti-blackness.

At the collection’s strongest moments, the contributors describe how post-black art enables new attitudes to emerge towards history and the afterlives of slavery. For example, Cameron Leader-Picone’s critical legal studies examination of Paul Beatty’s Man Booker Prize-winning 2015 novel The Sellout shows how Beatty undermines progressive historical narratives about racial equality, writing “If the struggle of the civil rights movement sought substantive equality for people and full citizenship within the state, Beatty suggests that its primary effect was the concealment of ongoing exclusion” (74). His analysis shows how the novel, which tells the story of a black man who reinstalls segregation in his town of Dickens, California, interrogates race as what Karla F.C. Holloway calls a “legal fiction.” Leader-Picone writes “Beatty seeks to move beyond the versions of blackness connected to either incorporation into the state or the market in favor of a blackness that doesn’t ‘giv[e] a fuck’ and that ‘doesn’t sell’” (68). Through weaving a comical narrative in which symbols of the antebellum South irrupt in a contemporary setting, where the black protagonist reintroduces systems of segregation that the civil rights movement abolished in the name of equality, Beatty disrupts established narratives of civil rights progress and lays bare the ongoing exclusionary and unequal nature of America’s basic governing systems.

Mollie Godfrey’s analysis of intersectional feminism and black collectivity, “Getting Graphic With Kindred: The Neo-Slave Narrative of the Black Lives Matter Movement,” draws a clear lineage between the intersectional black feminist concerns of Octavia Butler’s 1979 novel Kindred and Damian Duffy and John Jennings’ 2017 graphic-novel adaptation of it. Godfrey argues that the graphic retelling moves “toward the BLM-era need to reassert black collectivity without sacrificing the commitment to plurality, intersectionality, and inclusion upon which black feminists, black queer folk, and others insist” (85). In addition to documenting the text’s intersectional valences, Godfrey identifies how image juxtapositions place epistemological pressure on evidence. For example, when the protagonist Dana travels back in time to witnesses the beating of one of her enslaved ancestors, the illustrators juxtapose images between spectators in a way that “[coaches the reader]…to understand that such spectacles require our witness” (93). Image juxtaposition in this way restores a possibility for collective witnessing. In his article “Lynching 2.0” Jerome Dent writes that in widely circulated visual representations of black death, “The lines between viewer and participant…is a tenuous one at best…that must be reconsidered in the context of a society in which images of black dereliction and abjection are omnipresent.”3 The possibilities for collective witnessing that Godfrey identifies in Kindred: A Graphic Novel seem particularly suited to trouble the distance between viewer and participant, as she suggests this blurring can move readers from a position of witness to a position of resistance that wonders: “Do these images enable us to act as witnesses, or is their power lost to the dominant narratives that make them spectacles of dehumanization?” (98).

Overall, this collection’s focus on recent re-imaginings of history feels like an act of advocacy on behalf of imaginative possibility. Studying Kara Walker’s visual art, Derek Conrad Murray finds lines of departure from gridlocked, institutional rhetoric about diversity and inclusion which he typifies as managerial (33). Walker’s focus on baseness and perversity suggests that “the history of slavery is mired in fantasy, and racial abjection is among its obscene pleasures” (35). He writes that Walker mixes these fantasies with perceived historical truths to spin new mythologies (36). In these historical, mythological, and aesthetic convergences, Walker instantiates aesthetic “operations” which give blackness a material, affective presence that “exudes” beyond the visual, and therefore articulates cultural positions that go somewhere “beyond belongingness” (35). In doing so, Murray acknowledges what Walker’s satirical work beckons as “it slips the noose of social symbolism” (38).

Malin Pereira’s chapter on Thylia Moss’s verse novel Slave Moth takes up the idea of the literary critic as advocate. Through wordplay, claiming agency, speaking truths, and accumulating perspectives, Slave Moth’s enslaved, verse-writing protagonist Varl ultimately “wills herself to freedom regardless of external constraints imposed by remaining physically enslaved on the plantation” and in doing so Moss “redefines the very idea of freedom” (160-2). For Pereira, the paradoxes inherent in this epistemology of liberation makes Slave Moth a compelling post-black artifact. A quote from the book’s author states that she directed focus on Varl’s story away from popular constructions of slavery, including widely troped emphases on physical brutality. Pereira emphasizes the instructive nature of this shift: “Slave Moth…demonstrates how to be black and female in a racist, sexist society, thereby offering a model of how to free oneself within confining parameters” (Pereira 162). Pereira’s act of advocacy sublimates as she introduces a multi-textual umbrella she calls Slave Moth, Unbound, which allows Pereira to examine a number of the personal, artistic, and professional circumstances that surrounded Slave Moth’s writing. This critical move places these texts in relation to the book in a non-hierarchical manner, and situates Moss’s art in a tradition of black feminist performance art. While this mode of criticism absolutely eschews academic conventions, and especially those of literary criticism, these creative tools feel like the right ones.

The collection’s wide range of critical lenses highlights the breadth of shifting modalities currently at play with regards to representing blackness and slavery. The book’s final chapter, an interview with acclaimed playwright Branden Jacobs-Jenkins, gives space to the playwright to respond conversationally to questions about post-black art. This long conversation—published unedited—provides a strong sense of post-black aesthetics as something in process. Unfortunately, the transcript of an episode of the Uncivil podcast that constitutes the fifth chapter of SPBI does not translate as well. The podcast loses its argumentative coherence as a transcribed rather than a listened-to object. Yet I want to applaud the editors for these daring moves to include interview scripts alongside critical essays: they contribute to the collection’s overall feeling of an interactive, multi-valenced dossier. Such structural dynamism and capaciousness seems well-suited for post-blackness’ concerns with evolving scripts, formal experimentation, multiplicity, and irony.