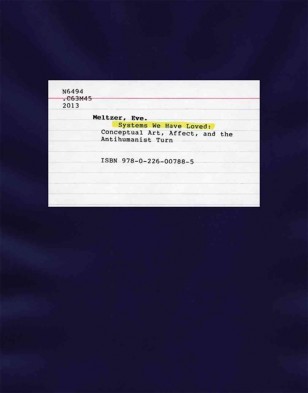 Pretend we are driving together. You are at the wheel while I direct you from the passenger seat. “Turn,” I say. “Which way?” you might respond. The action of turning, in both the ordinary and the academic sense, requires elaboration. The affective, feeling subject is the magnetic center of Eve Meltzer’s study Systems We Have Loved, with Meltzer carefully delineating the many directions towards which the subject can push—or be pulled.

The subject might turn, as Meltzer does, toward a new academic vista. Affect, she points out, is “a very now theme.”1Meltzer, however, attends to the affective life of her central topic, conceptual art, not to be stylish, but in order to think beyond the more familiar sense of “turning toward” invoked by the subject that Louis Althusser famously theorized in “Ideology and Ideological State Apparatuses” of 1970. The subject is hailed, instinctively turning toward the anonymous voice that calls “Hey, you there!” from behind. The gesture suggests that one is, above all, “a mere effect of pre-existing systems” while “identity categories [are] based on a structural notion of difference”—a notion that Meltzer attributes to the structuralism and anti-humanism that is endemic to the period she considers, the long sixties. Meltzer enumerates a “never entirely happy” marriage between conceptualism and structuralism in four chapters that focus on MoMA’s Information Show, Robert Morris’s early neo-Duchampian works and Blind Time drawings, Rosalind Krauss’s “Sculpture in the Expanded Field” alongside Robert Smithson’s work after 1965, and Mary Kelly’s Antepartum and Post-Partum Document.2

Meltzer skillfully analyzes Information, which included over 150 artists from across the globe, with an eye for the conceptualists’ varied responses to structuralism. Both the work in Information, like Siah Armajani’s A Number Between 0 and 1 and Hans Haacke’s MoMA Poll (both 1970), as well as important precedents and antecedents of the exhibition, like Sol LeWitt’s exhibition announcement for a Dwan Gallery Show (1967) and his Variations of Incomplete Open Cubes (1974), expose what Meltzer calls “The Dream of the Information World.” The dream is one in which the aesthetic of information reigns supreme. The aesthetic might picture the world by printing every digit that makes up the number 10-205,714,079, then stacking the papers to fashion a sculpture, as Armajani did; it might also picture the world by making visible the systemic injustice that sustained MoMA circa 1970, as Haacke did. Meltzer is most interested in artists who do not fully embrace the structuralist grid, but rather turn away from it.

Turning away is, for Meltzer as for other affect theorists such as Brian Massumi, a gesture of negation that leads one beyond “theories of signification that are still wedded to structure” and into a “theoretical no-body’s land,” imagined as the “space of the crossing, the gaps between positions on the grid.”3Meltzer therefore attends to those moments that exceed the grid—such as when the paper in Armajani’s sculpture sags and thereby becomes more than a number between zero and one—just as a psychoanalyst would attend to what is repressed by the scrambled codes contained within a dream. Along these lines, the book’s remaining chapters look not only for places where art insists on a more rudimentary, affective world that structuralism can neither acknowledge nor explain, but also where structuralist theorists are caught in the very act of repression. Morris’s early Duchampian works, for example, turn away by using irony to poke fun at the absurdity of structuralism’s impulse to master the world via reason. In the chapter on Krauss’s “The Expanded Field” and Smithson, Krauss’s choice of Mary Miss’s Perimeters/Pavilions/Decoys (1978)—a big black hole in the earth—turns out to be an apt metaphor for what constituted art history’s structuralist turn but is conspicuously missing from its discourse: Clement Greenberg’s historicism and “a range of valences—bodily, physical, sensorial, material—that are regarded as prior to or outside of the possibility of being meaningful at all.”4 Meanwhile, Smithson reveals the “dream of the information world” to be a kind of nightmare, but rather than placing his faith in the structuralist exposé of “The System,” he more successfully expands sculpture’s field by reveling in the alogical growth of crystals. In the final chapter on Post-Partum Document, “After Words,” Meltzer finds grief and attachment in Kelly’s cerebral Lacanianism: “X is arbitrary but not indifferent,” Kelly tellingly remarks of her son’s early, pre-symbolic cross-shaped marks.5

The chapter on Morris, “Turning Around, Turning Away,” brings into relief a few problems with Meltzer’s search for affect. Meltzer briefly discusses Morris’s Self-Portrait (EEG) of 1963, which records the artist’s brain waves as he concentrated on himself. One could suggest that the oscillations of the black lines cannot be subjected to any representational system, or that the project of Self-Portrait—to transform an inimitable individual into an objective scientific record—is inevitably undermined by the impossibility of that project. But the gratifying feelings that come from Morris’s cool, sly humor are more an afterthought or a side effect of that fundamental project, and Meltzer even wraps up her commentary on the artist with a claim for the solitary, self-referential, intimacy-refusing, closed-circuit, straight-structuralist quality of his art. Indeed, feeling is just barely squeaking out of much of the notoriously disaffected works discussed in Systems We Have Loved. Were one wont to claim, as Meltzer rightly does, that art pictures an affective world not captured by structuralism—perhaps a world of feeling already invoked by that hot, magnetic word in her title: “love”—why not write about Abstract Expressionism, for example? Indeed Meltzer’s prose feels like a Pollock that hits the sweet spot between emotional expression and organized rigor. The author’s close readings are thrilling for their speculative quality and delight in detail—reading Systems We Have Loved can feel like stealing an introvert’s absorbed rapture—and yet Meltzer extracts a carefully orchestrated structure and tight argument from her aesthetic and loving responses. One wonders if Meltzer’s topic, the disaffected conceptual artist, is her own version of the structuralist grid. Meanwhile, her exquisite close readings escape like repressed affects.

Another reason that Meltzer stakes her claims for affect on the disaffected is her rejection of another kind of turn—the return. Resisting the “fictive and forgotten space time” of humanism that Meltzer claims lurks before structuralism’s always already interpellated subject, the author will not have any talk of the “individual,” nor talk of “the notions of expressions and style, creativity and freedom; the artist’s touch; materiality and the body.”6While her desire not to reopen well-worn topics is understandable, the reader is left suspecting that it is not possible to make a claim for robust affects without resuscitating such categories—and further that Meltzer herself is hesitant to endorse such a claim. Furthermore, Meltzer could do more to explain to her readers why reading affect as excess, as Massumi does, is not a continuation of the post-structuralist project—and indeed, perhaps Meltzer could do more to differentiate post-structuralism from structuralism and paint a more precise picture of the hermeneutical model to which she (like the “we” in her title) is an heir. This might make it clearer where we are to find the “other kinds of turns, both their effects and their affects” that Meltzer calls for, and how to think beyond the binary of the private, humanist subject and dehumanized, anti-humanist one.7