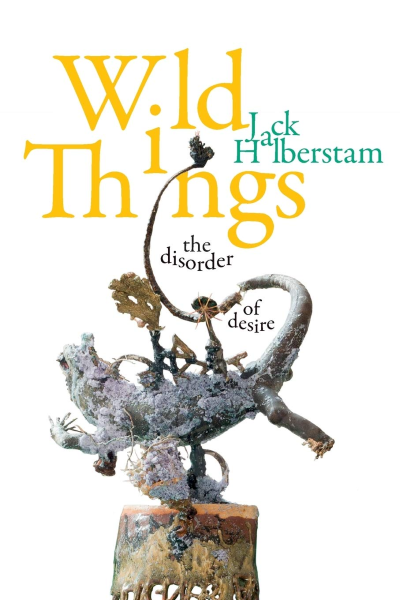 On the other side of interpellation, where the hail does not reach, where the call is unheeded, where the subject falls apart or is unturned or never takes any real form, there is wildness. In Wild Things: The Disorder of Desire, his most recent kaleidoscopic movement across and against discipline(s), Jack Halberstam reminds us again that the hail, the “call to order,” surrounds us, begging our fidelity.1 And yet, there is an outside to the hail that is uncertainty, chaos, unknowability—an untamed and untameable outdoors that can be accessed only through bewilderment or a refusal to turn (back) into the false comforts of human-ness and domesticity. This is not to say, however, that the wild is a place of truer ease. As Halberstam explains, “wildness has its own regulatory regimes, its own hierarchies and modes of domination” (131); those not always already forced into an approximation with the wild via the violence of anti-Indigeneity and/as anti-Blackness must, like Max in Maurice Sendak’s Where the Wild Things Are, decide between the violent incarcerations of order and the terrible potentialities of order’s own annihilation (134).

In Wild Things Halberstam moves restlessly across literature, cinema, theater, music, and poetry (across the “an/archive…space of the unrecoverable, the lost, and the illegible,” [29]), determining the various modes by which people have devoted themselves to, or been effectively written within, the incomprehensibilities of the wild, of wildness, and of bewilderment. Split into two parts, “Sex in the Wild” and “Animality,” Wild Things (un)clarifies the wild as an always-present threat to modernity’s coherence, illuminating the anti-Black and heteronormative carceral logics at the heart of liberal democracy by unveiling those undercommon ways of knowing and being that liberalism seeks to obscure, incorporate, lock up, or destroy.

“Sex in the Wild” reckons first with the queer life of Roger Casement, a diplomat turned revolutionary Irish nationalist, humanitarian, and pederast who fetishized the flesh of young Black and brown boys. Casement’s life, read alongside anthropologist Michael Taussig, Joseph Conrad, and others, exhibits the wild as a contradictory place, where seizure, appropriation, and theft may be attempted by the one who seeks to order it and save it from itself. Yet, as Halberstam explains, if the wild is entered with expectations of order or plans for its colonization, it will provide only death and further incomprehensibility. Indeed, as with Stravinsky’s and Nijinsky’s infamous The Rite of Spring, the wild will also confront us in every attempt that we make to confront it. This conflict is one of “bewilderment,” a term Halberstam conceptualizes as “an enchantment that follows a complete collapse of reference and reconcilability” (67). Bewildered, the world slips into chaos, knowing clashes violently with unknowing, and we turn nervously again toward the wild in the hope that it might provide us solace. Instead, as Wild Things makes clear, we come face to face with our most feral desires, and with our desire to become feral. Encompassed by an “epistemology of the ferox”—which at once nods to and explodes the claustrophobic parameters of Eve Kosofsky Sedgwick’s “epistemology of the closet”—bewilderment introduces us to the often violent and disordered entanglements of our bodies, sexualities, desires, and identities with space and time, nature and domesticity, freedom and unfreedom (81).

While “Sex in the Wild” opened a line of sight into the uncertainty of disorder and the unknowability of the wild, “Animality” poses a surprising, brilliant challenge to Western pet raising. For Halberstam, the ever-growing literature on bio- and necropower in modernity, which spans the work of “Michel Foucault and Achille Mbembe, Jasbir Puar and others,” fails to attend to the “new balancing acts between bio- and necropolitical regimes” (118). To account for this gap, Halberstam conceptualizes a “zombie humanism” with which Western Man retains and reasserts his human-ness through delegation of the life and death of the Other (140).2 This onto-epistemological re-institution of the human occurs via the consumptive, and ultimately destructive, procedure of pet keeping—a procedure that both imitates and conditions other carceral and biopolitical projects. To be sure, the ‘overrepresented’ human—the non-Black, homo oeconomicus of the Western world most poignantly elucidated in the work of Caribbean theorist Sylvia Wynter—has throughout history (re)secured its humanness by making of the Other a “prosthetic extension of our mortal bodies” (150).3 Halberstam insists on the pet as an uncanny variegation on hundreds of years of chattel slavery and the “plasticization” of Black life—that is, as the most recent object of a violent domestication that shores up Man’s moral and existential self-affirmation.4 It is through the bio-/necropolitical approximation of non-white, non-human, wild bodies to living death and/as domesticity that Man (re)inaugurates his coherence.

In the closing pages, Halberstam turns to the challenges posed by Afro-pessimist thought, asserting that with every zombie animated in service of the human, the threat to humanity itself grows. Rather than live in fear, however, the author says we must embrace what the zombie horde—the masses variously exposed to (social) death, imperial violence, and gratuity—teaches us about ways of being together, not in service of the human’s extension but out of the human’s rotting corpse. To me, this “zombie antihumanism,” thought through the work of Calvin L. Warren, Zakiyyah Iman Jackson, Saidiya Hartman, Frank B. Wilderson III, Hortense Spillers, Christina Sharpe and other Black theorists, prefigures the most compelling, if not entirely intended claim of Wild Things: that Blackness was always in and of the wild; at once just beyond interpellation, the condition of possibility for every interpellation, and the impossible end of interpellation itself. Indeed, only those who can assume a certain proximity to whiteness (or cisness, or heterosexuality), and to Man, can choose between the fascism of interpellation/domestication and the disorder of bewilderment. Taking Afro-pessimist thinkers seriously, we recognize the implausibility of the (non-Black) human choosing the latter and engaging in an ultimately self-destructive zombie antihumanism. Still, if any force could end the world and the supremacy of an overrepresented human, and thus abolish the choice between order and disorder, it is a wildness always already radicalized in Black (trans/queer) waywardness.5 This wildness never required Max (Where the Wild Things Are), or Nijinsky (The Rite of Spring), or Roger Casement, let alone any other passing visitor; it is indifferent to the sightseer’s presence and resistant to his fetishizing gaze. Galvanized by those who cannot and would not ever leave the wild, despite its own condition of unfreedom, wildness repels its colonization and knocks relentlessly against (white) order, always guiding it toward ruin.

Wild Things succeeds in confronting the late-capitalist, carceral, imperialist, anti-Black foundations that undergird liberal modernity by divulging to us those new and old and ever-present ways of being together apparent only in states of complete bewilderment. Nevertheless, there is something about the wild’s entanglement with the so-called civilized world that remains to be completely fleshed out and which Halberstam has only alluded to: the “anarchitectures of wildness” (29), the silencing of any subjectivating hail, the abolition of a whitened Symbolic order. In this absence, we are left only to await Halberstam’s inevitable return to the wild.