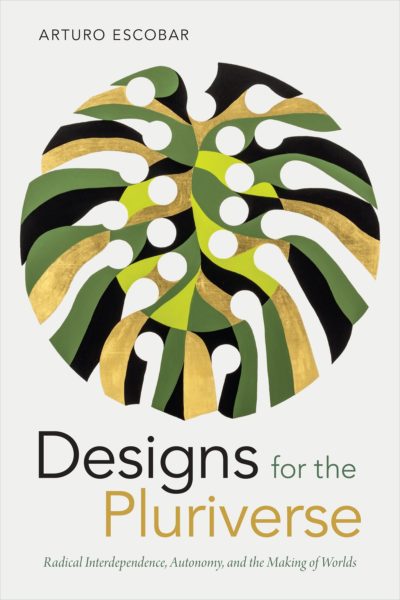 “The notion of oww [One-World World] signals the predominant idea in the West that we all live within a single world, made up of one underlying reality (one nature) and many cultures. This imperialistic notion supposes the West’s ability to arrogate for itself the right to be ‘the world,’ and to subject all other worlds to its rules, to diminish them to secondary status or to nonexistence, often figuratively and materially. It is a very seductive notion […]” (Escobar, Designs for the Pluriverse, 86).

It is only fitting to begin this essay with a provocative quote—as the author of the book under review, Arturo Escobar, chooses to begin each chapter of Designs for the Pluriverse: Radical Interdependence, Autonomy, and the Making of Worlds (2018). Escobar, professor of anthropology at University of North Carolina at Chapel Hill and author of several, groundbreaking works such as: Encountering Development: The Making and Unmaking of the Third World (1994) and Territories of Difference: Place, Movements, Life, Redes (2008), has woven together a timely book that lends insight from situated, present experience as opposed to abstract, universal prescriptions. In fact, Escobar is intent on dispelling—or rather, on un-doing and replacing—the tyranny of cold, “Western” abstractions which, he argues, dangerously distance and separate life into ordered hierarchies (i.e. human/non-human, culture/nature, man/woman, etc.). In Designs for the Pluriverse, Escobar sews together strands of interventionist thought from both the Global South (in particular, from Latin America) and the West (i.e. the imperial powers of Europe and North America) in order to chisel apart dualities and open up possibilities for pluralities of being. This fundamental conviction in the radical potential of ruptured dualities orients Escobar’s project and is at the core of his proposed thesis.

In the first two sections of his book, Escobar identifies and clarifies why universal abstractions and categorical dualities are so problematic. In particular, Escobar argues that the notion of a “One-World World” of the West is both built by and builds (i.e. reproduces) a very specific way of being he terms: “ontological dualism” (81). Escobar argues that ever since the Enlightenment, the Cartesian model has colonized modes of being along a hierarchy of culture/nature—where a dynamic and universal (i.e. European) culture observes and manipulates an inert nature (but not vice versa). The result is a distancing from the Earth via notions of “self” and “other”—with dangerous consequence. The failure of the “civilizational model” (ix) of the West, Escobar contends, is evident through the onset of ecological catastrophe.

Escobar therefore proposes an ontological shift away from Cartesian divisions. In part III, Escobar stresses how this ontological shift needs to be relational (132). A relational ontology, Escobar contends, reorients the way humans interact with each other and the world—or, along a multi-directional axis as opposed to a single, straight line.

Escobar dedicates the remainder of his discussion in Part III to discuss how this reorientation can be achieved. Design, Escobar insists, is the solution. Referencing Tony Fry, Escobar (117) argues that design can—and must—shift culture from fundaments of the “Enlightenment” (i.e. manipulating “inert” material through a vertical structure of “objective” and “expert” control) to fundaments of the “Sustainment” (i.e. maintaining a “flourishing” and dynamic mesh of relations comprised of ever-emergent ways of being through a horizontal plane of decision-making). Chapters five and six are explicitly dedicated to parceling out the role of design in both catalyzing (via Designs for Transitions) and maintaining (via Autonomous Design) the pluriverse.

In his discussion of Autonomous Design in his final chapter, Escobar is careful to explicitly demarcate “autonomy” in the contexts of Latin American, place-based activism and decolonial struggles. Escobar makes it painstakingly clear that “autonomy,” in the way he is using the term and in the contexts of Latin America, does not mean closed-borders (199). Autonomous Design is therefore wholly distinct from the violent projects of nationalism and ethnic essentialism at the heart of rising, Rightwing governments of the contemporary West. Autonomous Design is not about separation but rather about openness—about the possibility for emergent cultures and ontologies to flourish. Autonomy, counter-intuitively, means plurality—and is fundamentally at odds with the notion of a One-World World or other claims for a single, universal, essential, or objective truth or culture. Autonomous Design, therefore, can both activate and maintain the pluriverse.

While explicitly clear about the radical potential of Autonomous Design in chapter six, Escobar wavers in his discussion of how designers can foster this transition in chapter five. This shortcoming emerges from Escobar’s reliance on “future logics”—a paradoxical choice considering his previous critique of abstract, linear logics discussed in parts I and II. Escobar does acknowledge this contradiction (218-223), but leaves it unresolved. Escobar’s argument for the destruction of ontological dualisms in favor of the interwoven and unpredictable intimacy of relationality is therefore weakened because of his own reliance on temporal abstractions/linear notions of futurity. Escobar’s discussion of Designs for Transitions (chapter five) accepts a forward-looking orientation. This preoccupation with the future as opposed to the here and now, is a distancing mechanism on par with ontological dualisms. So how can the distancing logic embedded in Escobar’s proposed Designs for Transitions be resolved? How can the distanced gaze of both Cartesian dualities and futurisms be ruptured to achieve Autonomous Design?

By sidestepping his problematic reliance on abstract futurisms, Escobar leaves these questions unanswered and the reader not fully satisfied. But this open-endedness is, indeed, what Escobar is hoping to achieve (203). The onus is placed on the reader to resist the “very seductive notion” (86) of a universal, unwavering truth and instead, embrace the existence of an ever-emergent plurality of relations—or, to accept an indeterminate mode of being and becoming. Escobar concludes his book with an important yet somewhat unsatisfying call to action. In order to address the ecological turmoil of today, humans must dispel held assumptions, dualities, and abstractions. The ideas proposed in Designs for the Pluriverse highlight the need for Autonomous Design, but fail to offer a way to get there. Escobar does not and, indeed, cannot prescribe the exact contours or conditions for how this transition will (or should) occur.