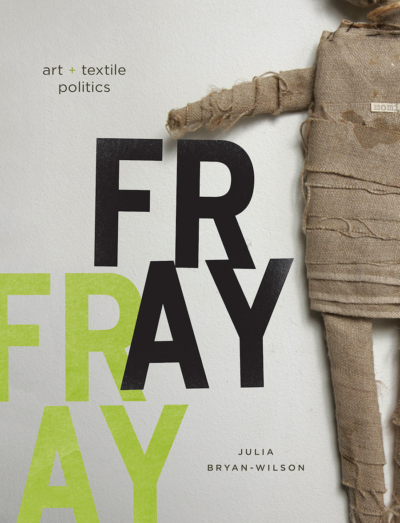 We are all experts on textiles, Julia Bryan-Wilson compels us to remember in her groundbreaking Fray: Art and Textile Politics (2017). We trace the properties of textiles daily as we select fabrics, as we watch the material of a favorite item fray over time, as we select new clothing, as we adopt a parent’s or close friend’s castaways. Threading through our lives, these daily scenes of textile endearment constitute for Bryan-Wilson the componentry of what she calls “textile politics,” indicating both a way of understanding materials as implicated in political agendas and a “procedure of making politics material” (7). If these personal scenes of tactility form the basis for a politics, they also, for Bryan-Wilson, form the impetus for a nuanced and expansive reading methodology that virtuosically traces how the personal intersects with global economies, with histories of female- and slave-labor, with the art market, with queer community, with national politics, with political regimes and revolutions, with the factories, places, and mechanisms whereby objects are made, and with their afterlives as they circulate through hands and markets. Shifting between scales and temporalities, Bryan-Wilson weaves together a way of reading textiles that accounts for their particular material dispositions: textiles bend, fray, rupture, are torn and remade into new objects. What emerges is an expansive account of how textiles have been mobilized in and by political concerns over the last 70 years, as well as a striking new model for thinking about materials as themselves political: as carriers and agents of meaning.

Assembling an archive that swings between institutional ‘high’ art and folk ‘low’ art across three expansive chapters, Bryan-Wilson not only makes a case for the centrality of textiles to contemporary art historical discourse, but expands the context of artistic production from the typical studios and galleries of New York and London to include such sites as the covert arpillerista workshops of anonymous women makers in rural Chile and the costumes of the counter-cultural, San Francisco queer commune-based “Cockettes.” Setting up an opposition in the first two chapters between high and low art through pairings of Harmony Hammond’s gallery-based braid rugs with the gender-bending costumes of the “Cockettes” in Chapter 1, and Cecilia Vicuña’s conceptual art textiles alongside the folk arpillera workshops in Chapter 2, Bryan-Wilson sets up a divide that she then thoroughly and meticulously deconstructs. In Chapter 3, she does away with the bifurcated formula altogether, dwelling for a prolonged period on the complexities of the AIDS Quilt, a continuing social-practice project begun among queer communities to address the tremendous loss of lives due to AIDS, whose size and magnitude bridges the gaps between art, politics, and craft. Among her analyses, Bryan-Wilson is thus particularly attentive to how queer communities across the US from Harmony Hammond to the “Cockettes” to the AIDS Quilt have drawn on textile art to forge identity and form community.

In the geographical dispersion of her project, which considers artists working in the east and west coasts of the U.S., in London, and in urban and rural Chile, Bryan-Wilson gestures to the boundarylessness of textile discourse, whereby a garment made by an underpaid woman in a factory in Asia is purchased and worn in the U.S., or an arpillera depicting scenes of torture under the Pinochet regime is purchased in a cheery world trade shop in Switzerland, scenes of trans-national articulation that punctuate Bryan-Wilson’s already expansive textile lens. Bryan-Wilson thus makes a convincing case for the role of textile art in understanding both the specificities of local community formation and the central dynamics of national and global neoliberal politics since the late 20th century.

One compelling dimension of Bryan-Wilson’s reading practice is her incorporation of an object’s ‘afterlives,’ whereby an object gains new meanings in new contexts, into her close consideration of its formal and tactile aspects. This kind of “temporal elasticity,” she suggests, is not foreign to textiles. Rather, it is woven into their very form at the outset: textiles are filled with uncanny returns, echoes, and reiterations that correlate with an “interpretive pliability” in which texts mean differently in different contexts (178). For example, in the case of the arpilleras, Bryan-Wilson points out that during Pinochet’s regime, the durability and portability of the textiles meant that they could be smuggled out of the country and sold abroad, where transnational markets of humanitarian aid organizations, church groups, NGOs, and global trade gift stores would sell them to socially-minded consumers. The “visual text” of the arpilleras is thus not only determined by villagers’ experiences of the regime; rather, the works are formally “structured by the frictions between making and selling,” where the demands of the global market for particular kinds of imagery – whether ‘political’ or ‘pretty’ – transformed the production of the textiles themselves, commercializing the process and intervening into the local context (151, 171). Textile art thus makes particularly apparent a kind of hybridity between art object and context, such as that between object and market, that can extend to other contexts and to other art objects. Unlike some art, because of its historical and tactile link to industry and portability, textile art cannot be so easily riven from its immersion in a market. Even when staged in a gallery, as in Harmony Hammond’s braided rug paintings, the material itself references industrial and domestic labour histories that draw the object back into conversation with the marketplace.

In the virtuosity of its reading practice and archive, Fray intervenes in fields of several stripes. Readers interested in the history and politics of craft, in contemporary art, in institutional histories of galleries and artistic production, in histories of globalization and neoliberal marketplaces, in the relationships between Chile and the U.S. in the late 20th century, in queer culture and counter-cultures, in art’s relationship to governance and international politics, and in contemporary ‘craftivism’ will all find much to think with in this important book. From my own disciplinary vantage point in an English department, I would emphasize that Bryan-Wilson’s book might also be seen to shift conversations about what it means to read and makes an important contribution to literary studies conversations about methodologies of reading and the materiality of language. Forming a touchstone for modelling what it means to read a text as politically textured – as woven among its contexts, as situated and resituating cross-temporally – Fray demonstrates the import of a methodology that foregrounds a text’s instability rather than attempts to stabilize it. Indeed, it provides a model for thinking about texts as art – as objects and documents that do things, often with distinct political agencies – and about the flexibility of language and materials across time. Placing the quotidian intimacy of a frayed shirt at the center of a reading practice that ranges across political, national, and textual boundaries, Bryan-Wilson gives us an immediately indispensable working model for the politics of tactile texts and for the tactility of politics.