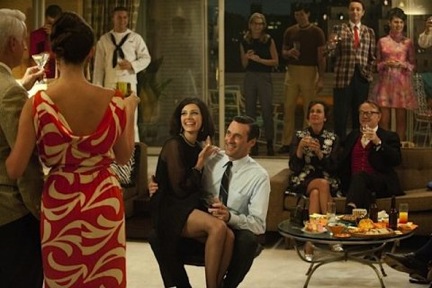 Mad Men, of course, has always been a show about work. And although the characters seem to like one another, or at least many of them do, their connection, after all, isn’t so much friendship but a common pursuit – they work in an advertising agency together. Viewers have had pretty good access to the home of Don and Betty Draper during the first three seasons of the show, but Season Five of Mad Men has repeatedly taken us into the homes of its main characters in a way that it hasn’t before – as a means of delving deeper into their stories and giving us further refractions of their selves.

What has been especially compelling about these at-home moments has been the tension between what we know of the characters from work and how we see them at home. From the very first episode, which began with Sally Draper awakening in an unfamiliar apartment and wandering into Don and Megan’s bedroom and culminated with its amazing set piece of Megan’s surprise party for Don and the deep discomfort it created for most of those in attendance, home has operated as a blurred site, one that has frequently operated as a space of tension for the characters, who seem most at home in the offices of Sterling Cooper Draper Price.

Let’s begin with Pete Campbell. Pete is junior partner at SCDP and clearly on the rise within the company. He is challenging Roger as the preeminent account rep in the firm and taking on more clients. He wants more recognition in the company, though, and is pushing for greater support from the other partners, more money, and a certain amount of respect – all of which becomes signified through his desire for a bigger office. Roger eventually bribes Harry Crane, the television specialist at the firm, to give his office to Pete in order to protect Roger’s own space. Pete is mollified, if still ambitious for more. 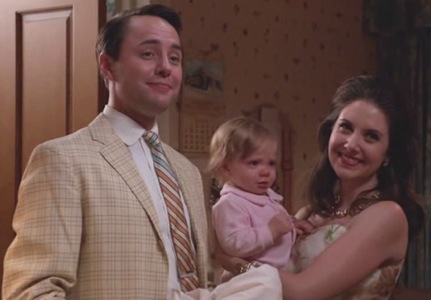 At home, though, Pete is anything but satisfied. A New York City native, Pete has moved to the suburbs with his wife, Trudy, and started a family. The show has made repeated references to Pete’s unhappiness there. He is unhappy with his house, with Trudy, with what the child has brought to his previous way of life. The Campbells’ home and the suburbs seem to signify discomfort, despair and malaise to Pete in ways that his stifled ambition at the office never does. His inability to make things work there is captured during his dinner party when the sink that he thought he had fixed breaks and Don has to fix it, symbolically castrating him in front of his wife and his friends. Soon, Pete is looking to hook up with a high school student in a Driver’s Ed class, only to lose out to a fellow highschooler nicknamed “Handsome.” Not long after, Pete does sleep with a fellow despairing suburbanite, the lonely and depressive wife of one of his compatriots on the commuter train into the city. However, she denies him any power to prolong the relationship and refuses to continue it, leaving him even further depressed with the state of his affairs in suburbia. Whereas he comes across as in control at work and even on the rise, at home Pete struggles to maintain any agency at all.

Peggy Olson’s home also reflects a tension, though hers seems a direct reflection of how things are going at SCDP. Peggy is working as hard as ever and her ambitions continue to drive her. But she is having mixed success this season. The clients are not responding positively to her pitches for campaigns and Michael Ginsberg, the new hire, and even Megan Draper, Don’s wife and her mentee, have had greater success in presenting their work than she has. Peggy is a junior-level creative with some basic oversight responsibilities, but she is also stuck as a woman and an employee. She wants more success and is working for it, but hasn’t yet found the formula that will work for her. As she says to Dawn, sitting on the coach in her apartment, being a woman at the office has its limitations and she has tried to be like a man at the office, but this hasn’t worked for her. She’s not even sure she wants that approach to work for her. She’s searching for how to be herself in the work environment, trying on personas such as Don’s when making her pitch to Heinz about baked beans, and ultimately flailing around somewhat and then failing as Don’s “wife” in the pitch on the dessert topping. 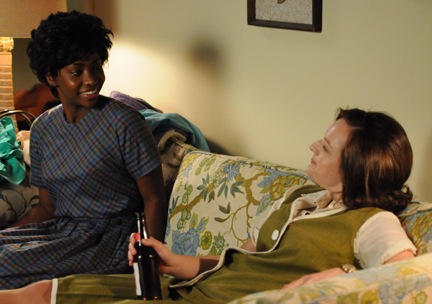 That conversation with Dawn on her couch served as a central moment for her to articulate her work frustrations, but it is telling that it happened in her home and not at work itself, and it is telling with whom it happened. As Peggy once was, Dawn is Don’s secretary, but she is black and during a night of urban unrest during the summer of 1966 has acquiesced to Peggy’s offer to spend the night at her apartment rather than to head uptown to Harlem and risk her safety. On one level, Peggy’s offer of a safe place to spend the night is a generous, liberal-minded gesture to a co-worker who just happens to be black. But then there is Peggy’s anxiety about leaving her purse on the table with Dawn in the room. She wants to do the right thing but has fears and anxieties about it. She wants to be liberal-minded, but doesn’t fully trust the black woman who will be sleeping on her coach. She wants the authority of the men at work, but she also wants to be acknowledged as a woman. Peggy is also, of course, dealing with her relationship with Abe Drexler, her steady boyfriend for a while now. We see the two of them together one morning in Peggy’s bedroom, where they fight over Peggy’s greater commitment to work than to him. She asks him if he wants to break and he storms out, only to ask her that night to move in with him. This would seem to be good, except that Peggy was hoping that he would ask her to marry him.

This tension – getting part of what she wants but not all of it, or not knowing exactly how to get what she wants, no matter how hard she tries – recurs for Peggy in both the home and the office. She wants to think beyond race but can’t quite, she wants to support Megan at the office but is also jealous of Don’s trust in her, she wants to proclaim her happiness with her relationship with Abe but she also would prefer something more traditional. Looking ahead, it is hard to imagine that the relationship with Abe will go well. Abe is not part of the office and when he is there he does not know how to participate in the repartee nor knows the details. Peggy has a life outside of him there and it’s the one she most values. It’s why she’s always working late and on weekends. Abe is an outsider to the office and the office is what matters most to Peggy.

Finally, we have the Draper home, the apartment with which we began this season. More than anywhere else on the show, this is the key liminal space between home and work. The party that began the season featured almost solely people from work in their home. Don and Megan are married but work together. Their home is also a space from which they work. It’s a home for family and stepfamily, a home where English is spoken and where French is spoken, a home of sex and sometimes of violence. Although it’s a space they share, it’s also the space she flees to when she leaves him at the Howard Johnson’s in Plattsburgh and puts a chain on the door to keep him out. In this home Megan can assert her authority, especially her sexual power – as when she sings “Zou Bisou Bisou” in front of Don and their colleagues and when she cleans in her underwear, teasing him and flaunting herself while claiming he can’t have her. But it’s also a site where Dick can assert his own agency – he does have sex with her when she strips down to clean and he breaks in the door she has chained to keep him out upon his return from Plattsburgh. And although it is a space they share, it’s also the space Don dreams about having sex with an old flame, and the space in which he kills her in his fevered dream when she won’t stop forcing herself onto him.

It’s Megan’s space, it’s Don’s space – much like his office has been this season. During the party few if anyone who attended knew how to behave. When coworkers approach Don’s office, they frequently ask the secretary if just Don is in or whether Megan is there too. The home space, then, is a refraction of what is going on at work. Don is not fully in charge, as Bert Cooper says to him on his return from the Plattsburgh trip. Now that Megan has left SCDP, perhaps Don can reassert his authority at work. At the end of the last episode, she leaves Don alone in the apartment with instructions for him to listen to “Tomorrow Never Knows” by the Beatles. Alone with the song, he seems flummoxed by the lyrics and the music and the final shot is of him turning off the music and walking out of the living room. On one level this seems to signal the disconnect between his generation and Megan’s – he doesn’t “get” the Beatles the way she does and perhaps he doesn’t “get” the power of popular culture that is emerging. But I also wonder if it signals Don’s decision to not let what is happening in popular culture define his home and his work. Perhaps he doesn’t need to know what the kids are listening to; perhaps he is prepared to return to a position of authority. Megan has walked out – of the house, of the office. It is time for Don to take control again. 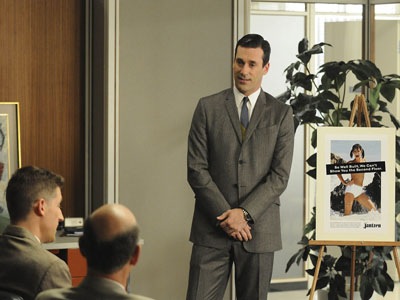 Like Pete and like Peggy, Don must always negotiate what he loves about the office and what it represents with who he is outside of that office. All three of them have deep longings and fundamental identity fissures that stem from issues of paternity and maternity and all of them are bonded by shared secrets. How they negotiate the varying spaces of office and home will tell us much about how they are able to maintain and indeed assert their selves as they move forward, deeper into the late 1960s.

Steve Brauer is an Associate Professor of English at St. John Fisher College, where he writes on modern fiction and on conceptions and representations of criminality in American culture. He blogs about “Mad Men” athttp://4tup.wordpress.com/category/mad-men/.