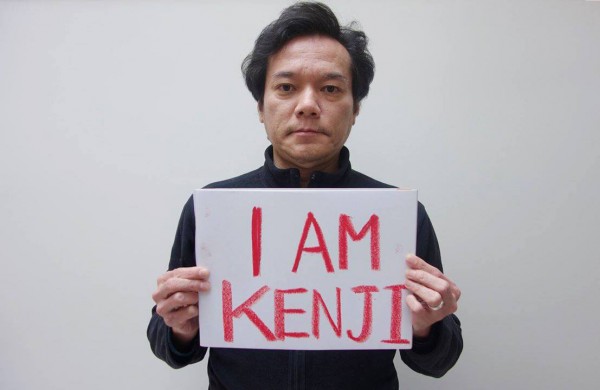 On January 20, 2015, ISIS released a ransom video featuring two Japanese hostages identified as Kenji Goto and Haruna Yukawa. That same day, Goto’s friend Taku Nishimae started a Facebook page titled “I am Kenji,” and subsequently posted a photograph of himself holding a letter-sized card bearing the same three words (Figure 1). The accompanying text invited others to do the same to “show that we are united.”1 Nishimae’s photograph is difficult to look at, not only because his fatigued face betrays his shock and distress at the news of his friend’s captivity, but also because it foreshadows a photograph that ISIS would release five days later. “Foreshadowing” might be an inaccurate word choice given that the photograph in question was likely a conscious mimicking of Nishimae’s image, if not of its model, namely, the mass spectacle of the anti-terror marches staged in the wake of the assassinations of the cartoonists and staff of Charlie Hebdo whose slogan Je suis Charlie (“I am Charlie”) became an international rallying cry for “freedom of speech.” In ISIS’s macabre parody, Goto appears in an orange jumpsuit (itself a reference to, and a poignant reminder of America’s extrajudicial detention of terrorist suspects in Guantanamo Bay) as he holds up a still photograph of the decapitated corpse of Yukawa, his co-captive. Instead of a card reading “I am Kenji,” we see a harrowing document of murder which also functions as a death threat for other captives. Turning the idea of solidarity on its head, ISIS’s image sends a morbid message that, if you are Kenji, this will be your fate.

In Goto’s photograph, ISIS target the rectangular field of the placard as their object of intervention. The target is well chosen, in a similar way that Slavoj Žižek has noted about Boko Haram’s conscious targeting of education as the crux of Western domination of Nigeria.2 Even though the ostensible purpose of  the simple letter-sized cards might only be to provide a material support for the words, “I am Kenji,” they themselves function as a powerful political rhetoric that promotes solidarity as an open, trans-ideological, and democratic value. While placards made by individual participants tend to emphasize a diversity of viewpoints through individuated designs, Nishimae’s campaign as well as its Parisian model imagine a collective voice that is at once unanimous (the same three words are repeated on every card) and based on autonomous individuals (each card is made voluntarily by an individual often using a home printer). Rather than a protest slogan, “I am Kenji” and “Je suis Charlie” should be understood as real-life surrogates of a hashtag, for their roles are not simply to communicate, but to interface; they link the physical space of diverse individual bodies to the virtual space of a collective undifferentiated identity. The minimalist look of the cards is central to the campaign’s ability to signify a universal appeal. To maintain the fantasy of international solidarity, the letter-sized cards must be kept neutral, standardized, and free of pictures.  It is this neutral look and connotation of universal appeal that ISIS rejects with the insertion of a revolting image of Yukawa’s corpse into the standardized rectangular field of the letter-sized card.

Even before the murder of Yukawa and the release of ISIS’s photograph that mocked the “I am Kenji” campaign, Nishimae had expressed his uneasiness at his own strategy of borrowing the rhetoric of solidarity from the French antiterrorism rallies. Once his Facebook campaign picked up pace, as thousands responded with their own photographs within a few days, he intervened into this onslaught of new images with a hastily argued disclaimer meant to distance his campaign from the Parisian fare: “I AM KENJI is not about freedom of speech; Kenji Goto is not a hostage because of his writing as a journalist.” The disclaimer was an exception in Nishimae’s campaign which otherwise stayed clear of political speech, refusing to discuss Japan’s increased involvement in the U.S.-led war in the Middle East as the background to the hostage crisis. Because his sole objective was to “pray for” Goto’s safe return, the campaign rhetoric was only useful as a way of gaining visibility. By this point, however, it was clear to Nishimae that forming an imaginary alliance with the French rallies not only seemingly aggravated the situation of the hostages, but also played into Prime Minister Shinzo Abe’s political theatrics intended to present him as a staunch antiterrorism leader. During his tour of the Middle East in mid-January, Abe knew of at least one Japanese citizen being held hostage by ISIS when he pledged two-hundred million dollars in non-military aid, choosing his words carefully to link the aid to the American war against the Islamic State. The aid was, he stressed, Japan’s support “for countries contending with ISIL.”3 On the one hand, the slogan “I am Kenji” was embraced by the critics of Abe’s zeal to remilitarize Japan—the slogan was in this sense a variant of another popular formula, “I am not Abe.” On the other hand, the idealism of international solidarity upheld by the slogans written in English or French paralleled Abe’s rhetoric of Japanese solidarity with the Western war on terror.

Behind international headlines that framed the hostage crisis as a conflict between Japan (and later Jordan) and ISIS, there was an implicit politics of visuality that centered on the culture of jishuku (“self-restraint” or “self-censorship”), which has compromised the media’s ability to critique the government in times of crises. While it is true that Abe’s cabinet has been more aggressive than its predecessors in applying pressure on the media, notably since the summer of 2014 when it issued a “reinterpretation” of the constitution behind closed doors to expand the definition of self-defense, it is important to recognize that jishuku is not a media black-out imposed from above. What makes jishuku insidious is that it is a populist spectacle upheld through the voluntary participation of individual agents. It is telling that the two notable precedents for jishuku were the death of Hirohito in January 1989 and the Tohoku Earthquake and Tsunami in March 2011. On both occasions, individuals, businesses, and the media took part in mourning the losses by cancelling events deemed too celebratory. Jishuku is an aesthetic regime built on a concerted silence. 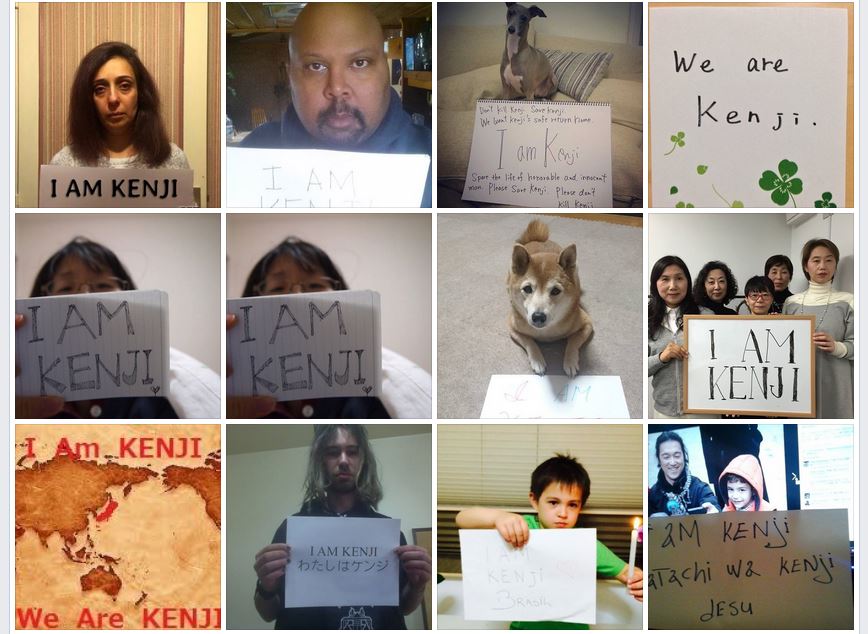 Nishimae’s visual campaign accompanied by a strong first-person statement broke the barrier of self-imposed silence, creating a mass public spectacle that countered Abe’s tacit spectacle (Figure 2). More importantly, it recognized the struggle against jishuku as one hinging on a politics of visuality—namely, the power of dictating what becomes visible in the public sphere. The centrality of visuality was, of course, already established when ISIS started “broadcasting”  images of cruel beheadings that Youtube among others painstakingly removed from their services. Internet pranksters in Japan challenged this tacit rule of propriety with Twitter posts of crude doctored images that juxtaposed photographs of ISIS members with manga characters and pop idols. While this defiance appears brazen, it is unlikely that these off-color parodies could have any serious impact on the culture of jishuku, since they are contained within the sub-cultural realm (again, the boundaries are organized by hashtags) and kept invisible from the individuals who censor their own experience of the web. A more effective approach appears to be the Disco at Prime Minister’s Residence Project which brought a DJ booth right up to Abe’s doorstep. Taking place on January 26, a day after ISIS announced their murder of Yukawa, this party held at the doorstep of the state constituted a bold defiance of jishuku-as-mourning (Figure 3). Freed from the placard/hashtags, the DJ event could be seen as the representation of  an ideal form of a collective movement–one that is built on the spontaneous expression of ressentiment. But a closer look at the video documentation of this event reveals a striking sense of discomfort. Because of the cold weather, the dancers/protestors appear bundled up in heavy coats, with some even wearing cough masks: hardly the attire for a lively night out. In stark contrast with the aesthetic uniformity of jishuku or the photogenic spectacle of the anti-terrorism marches in Paris, the DJ party is strikingly unaesthetic. But this need not be read as a shortcoming of the party’s efficacy as an act of political speech, for unease and discomfort are crucial affects in opposing the aesthetic regime of unanimity, whether it is jishuku in Japan or solidarity in France.