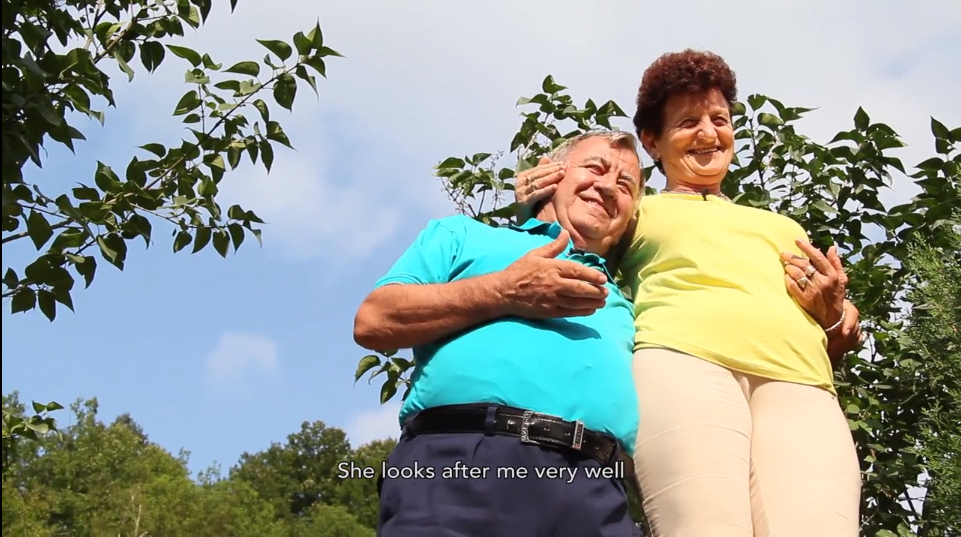 Marija and Toma are a couple in their 60s who had been married for just over a year at the time of shooting. Both of them have had several previous spouses, but now they are together they have a strong desire to show off and share the exuberant affection they feel for one another with the people they hold dear.

So it was that we were introduced to them while carrying out research for various on-going visual anthropology projects in Eastern Serbia, and they immediately invited us to join the lunch they were hosting to celebrate their 15-month wedding anniversary. In addition to their warmth and friendliness, we were keen to accept so that we could see the “Bird” monument that Toma had built for his village using money he had earned while working abroad. The monument actually turned out to be more of a village square that people could use for social events, such as the anniversary party in question.

We envisaged shooting materials to use as part of an on-going series of short films about visual identity and relationships to the home and host cultures in Gastarbeiter architecture. However, from the moment we arrived, their relationship and interaction came to dominate all forms of discussion, and it became clear that, for them, their love was the cornerstone of their existence. The monument is also, according to Toma, a display of several types of love: the one he felt for his late wife and son, an act of patriotism and of love for the community he gifted with a transformed public space. It is also interesting to think of Marija’s presence and self-assertiveness in this fairly patriarchal society. In this context, marriage becomes a structure for enjoying ageing.

While we still intend to produce an extended film on the story behind the monument in the future, we choose to concentrate on their marriage partly because of their captivating interactions with one another, but also because we feel that their love story reveals a lot about the way of thinking and way of life in this particular area. Contradictorily, their public displays of affection are highly performative and exaggerated, but also frank and heartfelt. Likewise, their concept of romance is both colored by rose-tinted fantasy and grounded in everyday practicalities. While they hold hands and caress like teenagers, they are fully aware of the extent to which their marriage is rooted in their status as pensioners, and in the life experience they have acquired thus far.

In terms of the filmic approach, we chose a static, exaggeratedly wide shot partly to be able to include the monument in its entirety, but also to evoke the ostentatious way the couple present themselves and their conjugal happiness (indeed, Marija and Toma chose where they would like to stand). This was then combined with closer shots that reveal the physicality of their exchanges with one another, which we feel provide an important parallel to everything that is being said.