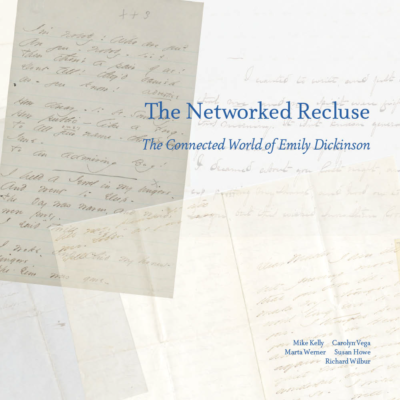 Reviewed by Sarah Kinniburgh, College of William and Mary

In The Networked Recluse: The Connected World of Emily Dickinson (Amherst College Press, 2017), a team of leading Dickinson scholars, curators, and poets takes up the task of contextualizing a figure in the American literary canon that has historically been understood as one-dimensional. In the popular imaginary, Dickinson is “lady in white” at best, total outcast at worst. A welcome complication of this portrait, Networked Recluse constructs Dickinson’s life as uniquely configured through her family and her broader circuits of correspondence in the town of Amherst in the years around the American Civil War. The volume was designed to accompany I’m Nobody! Who are You? The Life and Poetry of Emily Dickinson, an exhibit which ran from January through May 2017 at the Morgan Library & Museum, and, as such, benefits from the combined expertise and care of Mike Kelly, Carolyn Vega, Marta Wener, Susan Howe, and Richard Wilbur.1

Networked Recluse begins with a forward from Bailey, Director of the Morgan, that highlights “a number of important connections” (viii) within the original exhibit. For example, the exhibit featured a lock of Dickinson’s hair alongside every known portrait of Dickinson created during her lifetime and drafts of poems alongside completed manuscripts. Drawing on materials from existing archives—including those at Amherst College, Mount Holyoke College, the Boston Public Library, the Emily Dickinson Museum, and the Houghton Library at Harvard—the exhibit was curated to be, as Bailey puts it, “biographical” in the fullest sense of the word. In a similar way, the introduction by Mike Kelly, head of Archives and Special Collections at Amherst College, emphasizes how the exhibit was a collaborative effort across contemporary institutions, including Amherst College Digital Collections. Kelly is careful to note that such digital means of access have their limits, namely that, in examining digital manuscript drafts, “we lose track of their status as individual pieces of paper that were marked, folded, corrected, mutilated, sent through the mails, seen into booklets, or tucked between the pages of a book” (2). I’m Nobody! Who are you? aims to restore the three-dimensionality of such materials and, from their opening remarks, it appears that Bailey and Kelly see Networked Recluse as an extension of this mission, rather than of any single institution’s archive.

From this background information, the text of Networked Recluse continues into a section entitled “I’m Nobody! Who are you?”, which addresses Dickinson’s Childhood, College & Friendships (including the heart of the Morgan’s exhibit, details on her Companions and Correspondents), Literary Influences and Connections, Civil War Years, and Lifetime Publications in turn. Rather than dense blocks of text and image in strict chronological order, Networked Recluse features ample white space and a flexible timeline, particularly when it comes to setting the scene of Amherst itself. For example, “These images were made long after Dickinson’s time at Mount Holyoke,” one caption informs us, but those same depictions of the school’s religious and domestic life remain valuable to understanding Dickinson’s milieu, if not her exact experience. Throughout this section, most materials cluster together in groups of two or three, spreading asymmetrically across the pages like the flow of an exhibit down a wall. The occasional object, be it an early draft of a poem, personal letter, or photograph, is granted a full page of visual impact. One particularly effective page (56) features a musket from Amherst’s department of physical education that slices up the middle of the page. To the right of the musket are two images (a photo of Frazar Augustus Stearns, a student at Amherst who died in the American Civil War, and a letter in Dickinson’s own hand that describes how deeply Stearns’ death affected her brother, Austin); on the left are captions to these images, telling a fragmented story. The page visually represents how the war interrupted not only families, but entire institutions and communities like Amherst.

The most interesting elements of this printed exhibit are the recreations of Dickinson’s fascicles, hand-sewn books of poetry that saw the light of day only after her death in 1886, and particularly the editorial history of poems within these personal volumes. The multiple versions of “The wind begun to knead the grass” (43) exemplifies Networked Recluse’s awareness of the details when reconciling Dickinson the poet and Dickinson the human, the friend, the rewriter. The captions detail how Dickinson adjusted the poem in five distinct revisions, including a possible adjustment for a specific audience: Elizabeth and Josiah Holland, who Dickinson met in 1853 and received as visitors even in the 1860s as she retreated from public life. This notion of editorial history builds to the moments in which those in Dickinson’s orbit—Lavinia and Susan Dickinson, Mabel Loomis Todd, and Thomas Wentworth Higginson chief among them, in various turns—assumed editorial responsibility not only for her vast body of work, but for her archive and, as such, her presence in the public eye. In the context of Dickinson’s long and frequently underexamined afterlife, these posthumous materials convey the interconnectedness of her world just as well as her own correspondence. From the odd program ticket, scrap of paper featuring a fragment of a fragment of a poem, and magazine and newspaper clippings of her published works to bound volumes of poetry published mere years after her death, Dickinson’s world takes shape through the thoughtful, at times charming, “Checklist of the Exhibition.”

After this expansive material biography, Networked Recluse turns its attention to a series of essays that each draw on the image of the network to offer more focused perspectives on Dickinson’s personal and artistic connectedness. Werner’s two essays, “Emily Dickinson: Manuscripts, Maps, and a Poetics of Cartography” and “Textual Preface: Transcriptions as Thin Maps,” bookend this section, with “Sumptuous Destitution” by Wilbur and “Transcription and Transgression,” an interview of Howe by Werner, positioned in the middle. Each essay adds nuance to a range of questions about Dickinson’s life and legacy, but “Manuscripts, Maps, and a Poetics of Cartography” speaks most directly to the imaginary of Dickinson as she appears as an outsider.

After considering Edward Hitchcock and Alexander von Humboldt’s inquiries into and under Earth’s surface alongside the slightly lopsided gridlines of late-eighteenth century Massachusetts towns, Werner arrives at Dickinson’s writing desk as both a point on a map and a way to become oriented to the poet’s world. Eighteen inches square, originally made out of pine and cherry, “with a single fascicle laid on an otherwise pristine and vacated
surface” (101), the popular image of this desk conveys neither the expansiveness nor the emotional resonance of Dickinson’s network. Werner argues that this desk was more likely than not heavy with draft of poems and letters, and, as such, served as a launching point for engagement with the outside world even as Dickinson remained out of the public eye. In describing such networks, this essay seems to challenge the notion of Dickinson as a “recluse” in the first place.

In “Loneliness as a Way of Life,” Thomas Dumm—who teaches political theory and ethics at Amherst College, co-founded by Dickinson’s grandfather, Samuel Fowler Dickinson—considers this balance between forms of connectedness and isolation. Dumm engages with the tradition of loneliness and its companion form, solitude, from its recognizably “Western” origins in Aristotle and the modern form that emerges in King Lear to a series of American iterations: Thoreau, Moby-Dick, “Death of a Salesman,” even the cross-cultural collaboration of Wim Wenders, L. M. Kit Carson, and Sam Shepard in Paris, Texas (1984). In articulating loneliness “as the experience of unhappy removal from a life lived in common with others” (28), Dumm’s analyses bring him from his childhood home to Amherst, where he raised his children, to unexplored corners of the globe and back again, fundamentally unchanged, to his home and Dickinson’s final resting place.

Conspicuously absent from Dumm’s analysis is Dickinson herself, but this is not to say that she is a missing link. On the contrary, a recognition of Dickinson’s absence in Loneliness as a Way of Life highlights how readily readers perpetuate fantasies, or else misinformation, about authors, artists, celebrities, or the dead, in any combination. The subconscious search for Emily Dickinson in the pages of a book called Loneliness as a Way of Life reinforces the immediate importance of Networked Recluse and, by extension, continued studies into the multi-dimensional life and afterlife of this American poet.

To this end, it is only natural that Networked Recluse concludes not with an essay or an interview, but rather gives Dickinson via Werner the last say. Werner’s painstaking transcriptions, which replicate the marks and folds from Dickinson’s archive, are a striking conclusion to this expansive volume as they solidify and reanimate I’m Nobody! Who are You? The loneliness of the imagined Emily Dickinson seems further and further away as the exhibit becomes a reference volume in print, itself a node in future networks.