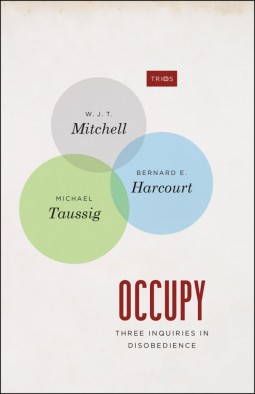 How does one properly theorize and historicize a movement like Occupy that is inherently shape-shifting, leaderless, intimately tied to specific contexts and places, and still evolving? In Occupy: Three Inquiries in Disobedience, three scholars from different disciplines, Bernard Harcourt (Law/Political Science), W.J.T. Mitchell (Visual Studies), and Michael Taussig (Anthropology), contribute to an emerging discourse about the role that Occupy might play as both a tactic and metonym for an inchoate type of political refusal—a form of “disobedience” that signals a new way of challenging entrenched forms of power. The text, comprising three interlinked essays, is what Mitchell refers to as a “stab at a second draft” of history that moves from the specificity of events in Zuccotti Park in the fall of 2011 to more general thoughts on the concept of occupation and the possibilities of revolutionary change.

Mitchell’s thoughtful introduction elucidates some of the productive tensions that emerge from the essays that follow. A key issue is the consideration of the event vs. the consideration of moments. The notion of the event, a defining feature of the revolutionary process, has become antiquated in an age of multiplicities, in which moments across the globe are connected, presented, and seen in nearly real time. The technological advances in mass communication that engender this connectivity allow for what Hannah Arendt called “spaces of appearance” or, as updated by Mitchell, “new media spaces for assembly and contestation” (x). In this way, occupation is an inversion of older protest models reliant on the time and place of the demonstration. In the mode of occupation, public space is inhabited indefinitely amidst an allied, global constellation of like-minded movements.

The first essay in the collection, Taussig’s “I’m So Angry I Made a Sign,” recalls Walter Benjamin’s montage approach to historiography. Taussig assembles “thick description,” snippets of protest signs; quotes and allusions from an array of thinkers and artists such as Friedrich Nietzsche, Hakim Bey, Fritz Lang, and Diego Rivera; and a collection of photographs to attempt to translate the multiplicity of experiences and perspectives embodied in the heady days of October 2011 in New York City. Taussig likens entering Zuccotti Park during this time as akin to “going to the movies” whereby the spectator—or in this case, a participant—is “put into the trance of that other reality” (4). Part of this trance, aside from the connections forged by solidarity and the presentation of an alternative form of living, is caused by “testing the limits of monetized space” whereby occupation is an artistic practice, the “art of being alive” (17-18). As Taussig argues, “revolution is different now” for “politics as aesthetics is back.” Yet the Occupy movement remains maddening for those attempting to make sense of it within the dominant framework of neoliberal politics. Occupy makes no concrete demands and proffers no leaders or spokespeople; thus, its collective anger and significance is still not fully translated. It eschews the language and customs familiar to the contemporary neoliberal system.

Harcourt’s essay “Political Disobedience” is the theoretical heart of the book. In his estimation, political disobedience involves both a refusal to abide by the rules and traditions of conventional politics as well as a resistance to the “fundamental way we are governed” (47). While the technique of civil disobedience relies upon an inherent faith in the system to hear and redress grievances and legal frameworks to properly protect rights, political disobedience “fundamentally rejects the ideological landscape that has dominated our collective imagination” (46). This rejection also includes the organization of the Occupy movement, which tends toward non-hierarchical structures and a multitude of perspectives. This inclusiveness, in Harcourt’s view, “allow[s] for occupations that generate possibilities without imposing ideologies” (480), engendering an important break with outdated protest models and tired, Cold War–era ideological binaries of “good” and “evil.” These binaries no longer align with sites of power, for in the current climate—in the United States, at least—“there is neither anything to overthrow nor any simple way out” (70). Occupy does not have all the answers and its power is based upon the fragile collective of varied political persuasions and experimental approaches to organization, but its unyielding resistance and disobedience “may open possibilities rather than close them” for a revitalized American Left movement (58).

The final essay, Mitchell’s “Image, Space, Revolution: The Arts of Occupation,” examines the important images and spaces that spurred and concretized the series of occupations and uprisings that characterized 2011 in varied sites across the globe. He argues that the notion of the image can function both verbally and visually. The viewing, by activists and others, of the widely circulated image of the self-immolating Tunisian street vendor, for instance, served to catalyze revolutionary fervor, but so too could simply hearing about it. This concept serves to elucidate the image of the “space” of Zuccotti Park. As Mitchell contends, “as images of Occupy Wall Street went viral in the global media, the park began to take on the look of a revolutionary space” (96). Images of Occupy were seen, talked about, and shared widely, and thus gained power in shaping a disobedient imagination. For Mitchell, the radicalism and revolutionary spirit of Occupy Wall Street, and thus its ideological thrust, emerges from an “iconography of nonsovereignty and anonymity” whereby the “figure of the charismatic leader” is subsumed by the “face in and of the crowd.” Thus the “only figure that circulates globally…is the figure of occupation itself” (101). “Occupation” takes on its dual meaning, from images of the inhabitation of public space to the other sense of the word encompassing work or a “job;” participants’ main occupation becomes active resistance. Mitchell refers to the Latin occupatio, an etymology that inhabits the seizure of “empty,” un-owned space: “The aim, in other words, is not to seize power but to manifest the latent power of refusal” (103).

As a stab at a second draft of history, the book is quite successful at probing the contradictions of the Occupy movement while speculating on its implications. While at times the themes and outcomes discussed become somewhat repetitive, the essays dovetail in a number of rich and surprising ways. At its core, the collection attempts to mediate the tension between the role of images in a digital society, wherein virality is a marker of impact, and the struggle for the commons, wherein the figure or image of occupation—the act itself— manifests as a contestation over space. That is, the struggle over the global commons and the power of refusal. Importantly, these essays also represent a first attempt at theorizing an emerging form of political engagement and disobedience that demands more sustained attention.

Ryan Watson is an Assistant Professor of Fine Arts at Misericordia University in Dallas, PA.