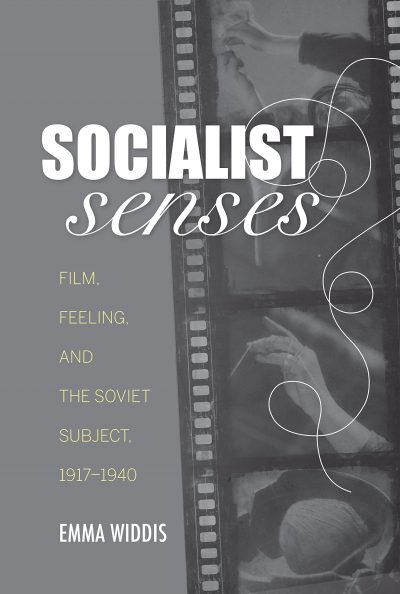 In Socialist Senses: Film, Feeling, and the Soviet Subject, 1917-1940, Emma Widdis offers a groundbreaking history of early Soviet cinema. The October Revolution, Widdis argues, inspired a radical, albeit undertheorized, cultural project of transforming human sensory experience. Cinema, moreover, became an important medium of this sensorial revolution. The moving image could simultaneously depict reimagined sensory encounters onscreen and, what’s more, could emotionally, psychologically, and physically make itself felt on its spectators. Film, then, helped transform Soviet citizens’ relationship to their material world. Drawing on a wide array of films, Widdis reveals how this sensory project, beginning with the 1920s avant-garde, evolved from one of transforming external sensations (i.e., touch, sight) to one of reeducating internal sensations (i.e., emotions, feelings) under the Stalinist doctrine of Socialist Realism.

In Chapter One, “Avant-Garde Sensations,” Widdis recounts the origins of the Soviet avant-garde’s preoccupation with the material and textural qualities of artistic production, what, in Russian, is called faktura. Indeed, Victor Shklovsky, a seminal theorist of the Soviet avant-garde, argued that art must expose the latent “sensation” (oshchushchenie) of all material things. This fixation with materiality, Widdis continues, uncovers an attempt by the Soviet avant-garde to revolutionize Soviet citizens’ relation to their physical world through art. The visceral impact moving images could exert on spectators’ psyche, as theorized by early Soviet psychologists, turned cinema into a privileged site for this revolutionary project of sensory reeducation.

Yet how could a visual image, Widdis asks in Chapter Two, “Material Sensations,” induce a sensual relationship between viewers and objects? Widdis suggests that the things encountered in early Soviet film (costumes, walls, sets) were cinematically rendered in such a way to emphasize their tactile, sensual qualities. For example, when the camera in Sergei Kozintsev’s 1927 film S.V.D. – one of the many films Widdis spotlights – lingers upon a frozen pond, the spectator struggles to distinguish screen from ice. The screen, then, becomes a glistening, sleek, skated-upon surface; it is transformed into a site of tactile exchange. This sequence exposes how spectators could feel that which is captured by moving images. Widdis demonstrates how Soviet filmmakers vied to enact the revolutionary aim of sensory stimulation without an overreliance on montage, what film critics traditionally regard as the driving force of Soviet avant-gardism. Boldly, Widdis here undermines the centrality of montage in Soviet film history.

The beginning of the First Five-Year Plan, in 1928, realigned the imperatives of the avant-garde’s fixation with material sensation. Soviet filmmakers were politically tasked with portraying real, ordinary Soviet people living real, ordinary Soviet lives, what, in Russian, is called byt. It is generally assumed that a sleek Soviet aesthetic of minimalism juxtaposed the overly decorative style of pre-revolutionary bourgeois domesticity. Yet, in Chapter Three, “Textile Sensations,” Widdis astutely reveals how the interior spaces of Soviet society depicted in early Soviet film did, in fact, reappropriate bourgeois aesthetics to rethink the relationship between spectators and objects. A focus on craft and material – instead of on bourgeois ornamentation – advanced the Bolsheviks’ ideological prerogatives of production and creation. Early Soviet cinema, then, became an exercise in interior design, in Soviet homemaking. Cinema revealed how socialist utopia could be built on macro- and micro-levels, in factories and in living rooms.

The Soviet hand itself, interestingly, played a major role in this cinematic discourse of design and making. In Chapter Four, “Socialist Sensations,” Widdis interprets the focus on human hands in 1920s Soviet cinema not merely as a romantic counterpoint to the Soviet cult of machinery, but as a handy metonymy for a reconceptualized, socialist self. The hands participating in the construction of socialist utopia became the stars of late 1920s and early 1930s Soviet film. Indeed, Dziga Vertov himself conceived of an unfinished project titled Hands (Ruki, 1927) comprised entirely of shots of fingers, palms, and hands in various acts of making. The tactile imagery Widdis describes is literalized by fleshy, fingerly images of Soviet handiwork.

These onscreen portrayals of the material byt of Soviet life, however, gradually gave way to an increased interest in the emotional inner-lives of characters. In Chapter Seven, “Socialist Feelings,” Widdis shows how, beginning in the 1930s, a project to reimagine sentimentality quickly displaced the avant-garde aim to transform sensuality. Unlike avant-garde cinema, Stalinist cinema consisted of less tactile, sensual films, but more emotionally simulative ones. Widdis here persuasively argues how cinema participated in a larger Stalinist enterprise of controlling and refiguring Soviet sensibilities. The films produced in the wake of the Central Committee’s 1932 Resolution on the Restructuring of Literary Artistic organizations, what is regarded as the beginning of Socialist Realism, vied to inculcate a specifically Stalinist affect.

This affective agenda, in turn, signaled the end of the Soviet avant-garde’s project of sensory reeducation. Discursively and aesthetically, Soviet emotions replaced Soviet senses. The last two chapters of Widdis’s book, then, deal with the unexpected afterlives of this revolutionary dream of sensorial transformation. In chapter eight, “Socialist Transformations,” The first afterlife of this sensory project, tellingly, lies in what Stalinist filmmakers still saw as a purportedly purer model of subjectivity encountered in the Soviet East. The later work of Vertov (Three Songs of Lenin, 1934), the earlier films of Mikhail Kalatozov (Salt for Svanetiia, 1930), and those of Mikhail Romm (Thirteen, 1936) exhibit a persistent fetishization of easterners and easternness. Their onscreen fascination, ominously, was at odds with the larger Stalinist undertaking of cultural and political hegemony. Accordingly, these films met official resistance.

The other afterlife of this yearned for sensory revolution is children’s cinema. In Chapter Nine, “Socialist Pleasures,” Widdis shows how the complex phenomenon of play (especially child’s play) offered Soviet filmmakers an opportunity through which to revel in the material objects of toys, costumes, and blocks. These childish sites of play, on one hand, became a refuge for sensorial pleasure, an unexpected outlet through which to explore issues of physical sensation. On the other hand, however, this increased emphasis on child’s play – imagination, merrymaking, dolls – exposes an attempted infantilization of the Soviet subject through film. The childlike elements of Stalinist cinema, Widdis suggests, were complicit in neutering Soviet subjectivity, a stark negation of the avant-garde’s project premised on sensual liberation. The goal of sensorial transformation, then, withered alongside many other of the avant-garde’s unfulfilled promises during Stalin’s regime, especially through the Great Terror of 1936-1938.

In Socialist Senses, Widdis provides an arresting take on Soviet cinema that pushes Russian/Soviet film criticism beyond the critical frameworks of auteurism and formalism where it has long remained. Indeed, Widdis provocatively sensorializes Soviet cinema with writing as seductive and sensual as the material she handles. Perhaps the only downside to this work is its lack of a more sustained engagement with Eisenstein’s theoretical writings on sensorial visuality, namely his 1942 work, The Film Sense. Notwithstanding, Widdis more than compensates for such an omission. Her bold theoretical claims, moreover, are enriched by an array of illuminative case studies often dealing with critically overlooked films, especially those having to do with the Soviet East. In theoretically interweaving the beguiling textures, surfaces, and materials of early Soviet society and cinema, Socialist Senses itself reads as just that: an elegant interlace of ideas, evidence, and argumentation, that is, a fully texturized piece of scholarship.