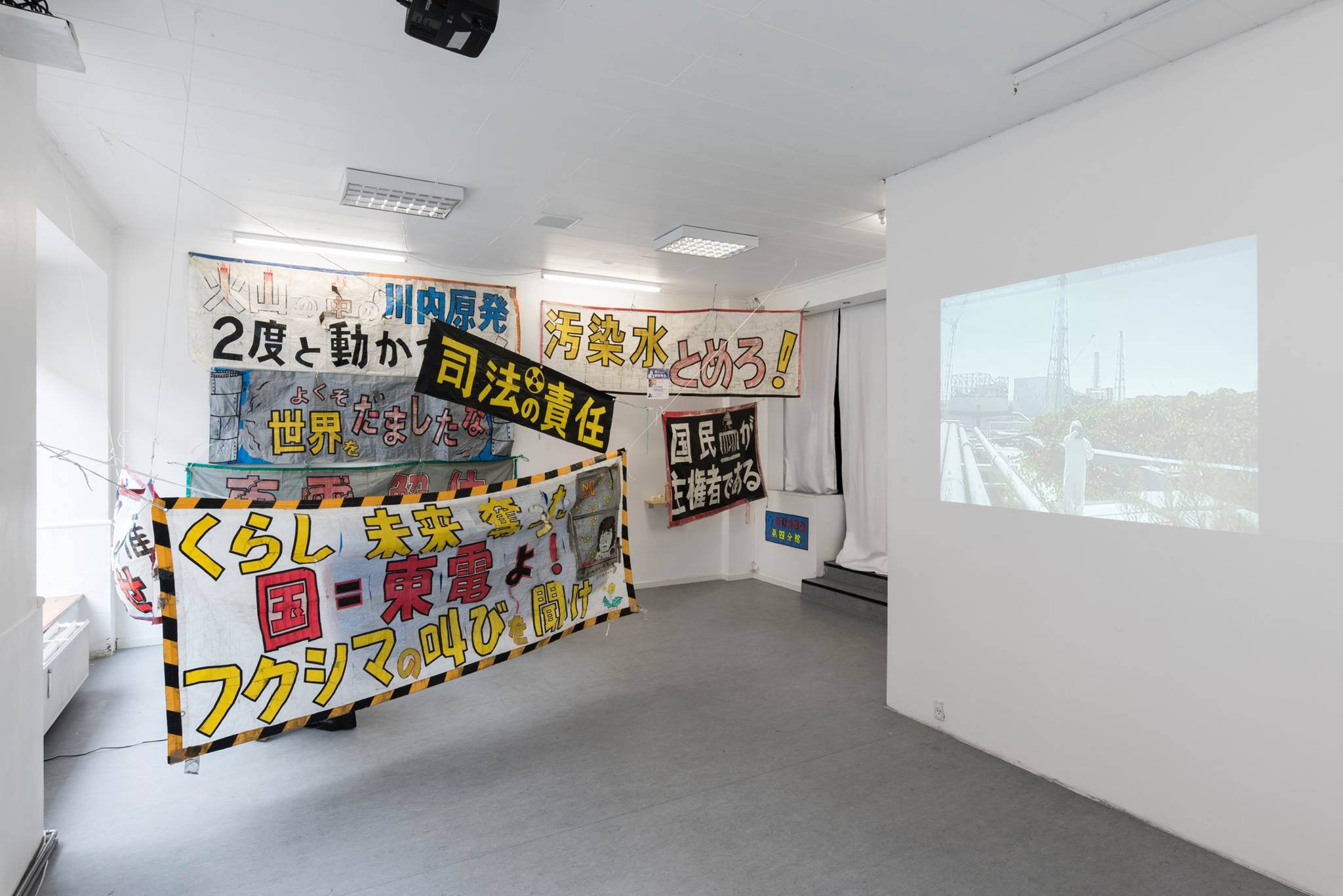 Exhibition review by Line Ellegaard, associate lecturer at The University of Copenhagen.

In March 2011 a 9.0 earthquake hit the near-off shore of Japan creating a tsunami that, caused tremendous damage on land, initiating a series of explosions, and the meltdown of three reactors at the Fukushima Daiichi Nuclear Power Plant owned by the Tokyo Electric Power Company (TEPCO). The ensuing release of radioactive material contaminated a large part of Fukushima and prompted the evacuation of another 154.000 citizens, in addition to the 470.000 already evacuated because of the earthquake and tsunami.1

During summer 2017 a three-part exhibition-series at X AND BEYOND surveyed work made by contemporary Japanese artists in the wake and aftermath of this nuclear disaster. “If Only Radiation Had Color: The Era of Fukushima”, co-curated by director of X AND BEYOND, Jacob Lillemose, the Tokyo based curator, Kenji Kubota, and independent critic and curator Jason Waite, looked at reconfigurations of the social in tandem with the ecological changes through artworks that contended with different stages of the ongoing crisis. Firstly, the exhibition-series must be understood to have particular relevance to the project space where it was shown, as part of a larger research project on disasters at University of Copenhagen.2 Equally significant though, considering that foreign journalists have almost ceased reporting from Fukushima, and that Japan has issues with freedom of press, seems the overall contextualization of these works outside of Japan.3 As the exhibition showed young Japanese artists assume a particular responsibility to respond to and confront this crisis through their artistic practice. 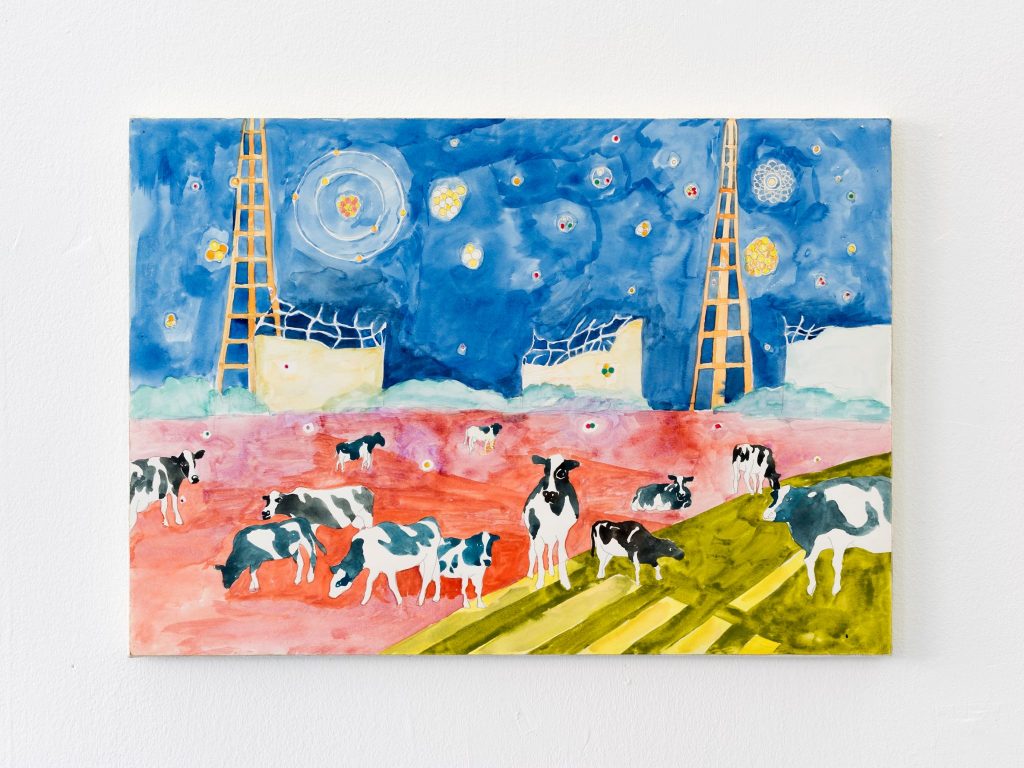 Centrally positioned in the small exhibition space, consisting of a front room with shop windows and a blacked-out back room, a watercolor by Nobuaki Takagawa stands out in the first exhibition ‘Proposition 1: Human Landscape.’ With cows roaming freely in a surreal landscape, Community (2011) was made in response to media coverage of evacuated Fukushima farmers that, unable to rescue their livestock, set them free in the hope that the animals could survive in their absence. Including power plant craters in the background and colorful particles lighting up the sky, the piece adheres to the wishful title of the exhibition, but also points to the ‘community’ left behind, as it becomes clear that a nuclear disaster is unfolding. The subtleness of the ensuing transformation of everyday life and the elusive change it epitomizes, is thoughtfully captured in Tadasu Takamine’s three-part video work Japan Syndrome (2012). In minimalist stage-sets actors reenact everyday conversations in a post-Fukushima Japan. Questions of what might be safe or unsafe to consume enters the conversations of sellers and consumers, imbuing these mundane activities with a sense of urgency, a risk-mitigating negotiation concerned with geographical origins. Meanwhile, Japanese collective Chim↑Pom more dramatically inaugurates the post-Fukushima age in their work Real Times (2011) by entering the contaminated area and planting a Japanese flag with an added radiation symbol, only a month after the meltdown. Projected on a white flag hanging from the ceiling the powerful testament is regrettably washed out in the bright sunlit space. 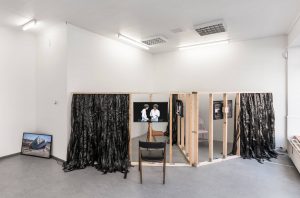 Fig. 2: “If only radiation had color. The Era of Fukushima (Proposition 1: Human Landscapes)”, installation view with Tadasu Takamine’t three parts video work Japan Syndrome (2012) on the right, X AND BEYOND, Copenhagen, 2017 (Photograph by David Stjernholm)

But what is the role of art in times of crisis? And what is the transformative power of disasters? The question is, as Sabu Kohso, noted during a conference on ‘Activism and Art in the Era of Fukushima’ presented alongside the exhibition: ‘Do we go back to how it was before or do we change our way?’4 The second installment, ‘Collective Dissent’ focuses on collective actions and self-organization in post-Fukushima Japan. Actions often taking place outside of the realm of art—through protests, clean-up work and social work—become intertwined with artistic practice as both the subject and the object of work. For instance, the artist Yuta Hirai, shows photographs of him and others testing the levels of radioactivity in fields, part of a self-organized initiative of local agricultural and consumer-cooperatives and the Fukushima University. Although a significant action on many levels represented through documentary traces, Soil Screening Project becomes somewhat dry. 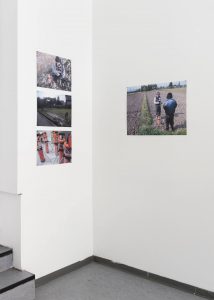 Fig. 3: “If only radiation had color. The Era of Fukushima (Proposition 2: Collective Dissent)”, installation view with documentation of Soil Screening Project by Yuta Hirai. X AND BEYOND, Copenhagen, 2017 (Photograph by David Stjernholm)

Others add gravitas to activist actions by anchoring them within an art historical discourse. Kota Takeuchi, an artist who worked at TEPCO in the summer of 2011, presented Finger Pointing Worker (2011), a 20 minute video of an anonymous clean-up worker inside the TEPCO nuclear power plant pointing his finger at the live webcam. An act of defiance and accusation, but also a homage to Vito Acconci’s video work Centers from 1971, a finger pointing work of the same duration.5 Furthermore, the latest version of Chim Pom’s video-work Ki-Ai 100 (100 Cheers 2011/2017), an energy chant with young fishermen in Fukushima in the immediate aftermath of the earthquake, performatively highlights the issue of self-censorship with a blackout spoof: words such as ‘radiation’ and ‘Fukushima’ and ‘comfort women’ and ‘North Korea’ are blacked out in the subtitles and incur a ‘beep’ tone.6

Aesthetically pleasing is the arrangement of worn-out protest banners hung from the ceiling. Salvaged from a five year long anti-nuclear protest occupying a street corner outside the Ministry of Economy, Trade and Industry, a provided translation reveals unforgiving statements, including ‘Dismantle TEPCO’ and ‘Our Live and Future Taken.’ Part of a work by Bontaro Dokuyama, which also included a video and architectural models, it becomes an acute testament to the history and reemergence of nuclear protests.

People chant, shout and cheer in the work of Amateur Riot, showing video-footage from an Anti-Nuclear Protest in Tokyo, organized by the group on April 20 2011; in Chim↑Pom’s aforementioned video; and in the film Project FUKUSHIMA! by Hikaru Fujii about the organization of a music festival in Fukushima, shown in the backspace. Melting together the sounds transition between a vexed sense of opposition and an air of collective life-affirming celebration. Could the productive potential of crisis be that it brings people together? By having a common enemy to confront, in solidarity, to recover? The question lingers in the space.

As the final proposition ‘Future Infrastructure’ is up, an artist figure has emerged: predominantly male,7 with an artistic production made in the slip water of actual engagement with the crisis, but also through social and ethnographic work. Whether curatorially conscious or unconsciously, the lack of women artists in the show raises unanswered questions of how crisis affects gender roles and how feminist contemporary Japanese artists have responded to the crisis, if at all? 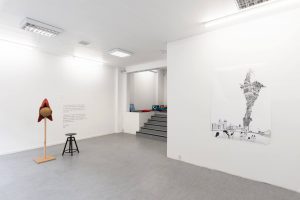 Fig. 4: “If only radiation had color. The Era of Fukushima (Proposition 3: Future Infraestructure)”, installation view with A Walk in Fukushima by Don’t Follow the Wind on the left, X AND BEYOND, Copenhagen, 2017 (Photograph by David Stjernholm)

Transgressing into the contaminated area, mostly in real terms but also symbolically, seems to be the most radical gesture and is performed in several works. In this last rendition most poetically in an installation by Don’t Follow the Wind, a curatorial project initiated by several of the artists and curators of the show. A set of virtual reality goggles placed within a peculiar looking headdress transports visitors into the no-go zone in Fukushima, and into abandoned homes and workshops. Here an exhibition, featuring work by artists such as Ai Weiwei and Ahmet Ögüt has been organized, but notably, figures in coveralls block the artworks so that these retain their inaccessibility, as long as the area is uninhabitable and the former residents unable to return.

Whereas the temporality of a nuclear-crisis is suffused with uncertainty, the chronological aspect of the exhibition-series gives the returning visitors a gratifying sense of following events unfold. Despite its academic roots, to witness through these artistic projects and documentaries, the current proliferation of social and politically engaged art in Japan, is a powerful testament to arts ability to portray the unquantifiable, to give form to the intangible, and to present things that are not visible for outsiders; namely those who are not affected by the ongoing crisis, like the viewers of the exhibition in Copenhagen.