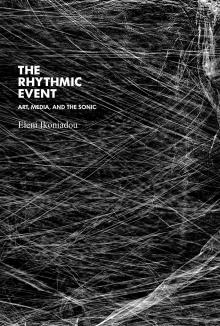 Along with a number of Deleuzian media theorists who have sought to map the affective function of digital technologies in recent years and think through how our engagement with such media might spur new senses and temporalities beyond a subject’s well-constituted cogito, Eleni Ikoniadou asks us to rethink our perceptions of the auditory and the sonic in her book The Rhythmic Event: Art, Media, and the Sonic. Her purpose here is clear. Joining in recent dialogue regarding non-conscious, affective experience that results in the flows between digital media and surrounding bodies, Ikoniadou explores the concept of rhythmicity and its impingement upon the body through sonic occurrences in digital sound art. To Ikoniadou, rhythm mediated through instances of digital sound brings underlying sensory and temporal experiences to the surface of human perception. This occurrence operates at a remove from Western society’s presumption that the “auditory” must be heard modally as well as measured through linear time.[1] The digital works she describes uncover instances that are not necessarily experienced through standard modes of listening but are felt viscerally, as inaudible and vibratory forces that linger on the edge of sound and open up the possibilities for new sensory and perceptual experiences.

Ikoniadou’s The Rhythmic Event provides a substantial Deleuzian analysis of contemporary digital sound art, and her work stands as an important contribution to a new materialist understanding of the digital, particularly the affective experiences that digital audio is capable of eliciting from a body. However, the strength of her argument breaks down in her effort to fully synthesize multiple materialist ontologies through the work of Vilém Flusser, Friedrich Kittler, Paul Virilio, and others. In her introduction, she lays out her intention to provide a web of materialist associations. However, her connections to these materialist media theorists could be strengthened by elaborating directly on how their work has influenced an understanding of the rhythmic event, especially through a Kittlerian analysis in which we might consider contemporary digital sound works as having autonomy and logic of their own that shapes human sensory and perceptual experience.

The strength of Ikoniadou’s treatment of the rhythmic event lies in the richness of her analysis of several groundbreaking digital works, which draws upon the philosophy of Gilles Deleuze, in turn borrowed from Baruch Spinoza. Deleuze’s notion of affective thought and experience as nonconscious and flowing between bodies through their capacities to affect and be affected is particularly influential to her discussion. Her analysis of sonic experience is an ontogentical one; the human body is conceived in a process of becoming through new perceptual, sensorial, and temporal modes and felt via an unfolding of affect through the impact of the sonic upon the body. This ontogentical analysis of the sonic begins with the concept of digital virtuality, which Ikoniadou explores through her own interactive work, Rhythm-House. In this work, the viewer’s body navigates through a series of dark rooms while wearing a belt that vibrates at specific intervals, and is scanned in the darkened space by motion-sensing cameras that prompt the release of varying intensities of ultrasonic and subsonic frequencies. These frequencies are produced as microsonic grains of sound, samples so minute that they have become non-discrete computations. These enable methods of hearing that are felt through internal processes. The human body thus navigates its way through these spaces, which arguably serve as unknown pathways of perception. The viewer’s experience concludes with the observation of a projection, in which abstract shapes representing the body trace the viewer’s path through the darkness. These abstract and often indeterminate forces in Rhythm-House manifest from areas of the virtual within the larger assemblage of the work, and create new potential experiences between and within each body that enters it.

What makes Ikoniadou’s treatment of Rhythm-House so compelling is her position as researcher-artist; the work is her brainchild, a concept she brought to fruition with the programming help of Stathis Sideris. Ikoniadou’s use of her digital project in support of her proposal that the aesthetics of digital sound are, as she notes “enveloped in additional processes: a potential or moreness (original emphasis) that may not be fully actualized at the physical level of interactivity between humans and machines,” feels refreshing.[2] Up until the recent flourishing of the field of digital humanities, approaches to humanist research have tended to avoid the production of born-digital projects and computational methods as tools that can assist more traditional humanistic study. Conversely, Ikoniadou’s Rhythm-House uses the production of a born-digital work to allow an individual to physically experience her materialist ontology of digital sound at the intersection between materialist philosophy and physical computing. Rather than engaging in hermeneutical interpretations of difficult philosophical texts, Rhythm-House offers the individual an opportunity to feel what it is like to interact with digital sound technology on a sensory and visceral level. In this way, Ikoniadou’s role as academic-artist allows for a broader audience to better understand the increasingly complex relationship between humans and technology in the twenty-first century from a more integrated perspective.

In the next chapter, Ikoniadou explores what she calls “hypersonic sensation,” or modes of perception that enable “nonhuman becoming,” in which a perceiver experiences the addition of a “felt surplus” to cognitive awareness brought forth through the affective capacities of unqualifiable rhythms. [3] For Ikoniadou, the hypersonic is constituted by the ability of new media art to affect the body on a presubjective, visceral level- or, as she states, sensation that prompts “hearing without ears.”[4] The most intriguing of the hypersonic media works she probes is Marie Sester’s ACCESS, which employs an audio spotlight in conjunction with motion-tracking cameras to shoot directional sound at unsuspecting bodies within a public area. The directional sound that hits the body takes the form of hallucinatory commands that appear to have no causal origin. They hurl the body into an unexpected “middle” between sonic happening and cognitive reasoning, a “betweeness” of “hallucination and reality, confusion and control, the affected body is thrown into doubt: should it try to escape or obey; run or fight?”[5] Through her analysis of these unprecedented digital works, Ikoniadou advances an argument that reads much like a Kittlerian media analysis, yet she does not disclose in any detail how the rhythmic event and the sonic technologies described might be interpreted through the work of the late Friedrich Kittler. As a preeminent media and literary scholar, Kittler’s techno-materialist approach posits that our knowledge of the world is derived from the ways in which we use self-determining media technologies whose logic, especially in the digital age, surpasses a human-centered understanding of technological development, in which media function as an appendage to human agency.[6] Here, Ikoniadou suggests that human perception is not necessarily “human” when we begin to develop corporal, hybrid relationships with digital machines, and thereby adopt machinic perceptions that are experienced in surplus to human consciousness.

Her final chapter regarding the sonic event and its impact on the perceiver is discussed in terms of a Deleuzian-Bergsonian reading of temporality, in which temporal-sonic happenings subordinate cognized linear time to presubjective pure time, which encompasses past, present, and future events contracted into indiscernible, temporal experiences.[7] Rhythmic time, as Ikoniadou calls it, is demonstrated in her reading of Lynn Pook and Julien Clauss’s Stimuline. In the fashion of H.R. Giger, the Swiss artist known for creating the surreal biomechanical set designs and alien creature in Ridley Scott’s Alien (1979), their work places multiple bodies into vibrating, audio-emitting suits that are interconnected through a series of wires to a central mainframe. The pulsation of these sounds and tactile vibrations from the suit submerge the body into a state of suspended consciousness that works to open up new temporalities that can no longer be experienced purely linearly. The more a perceiver lays in his or her sound suit and is deprived of his or her senses in the dark, silent environment surrounding Stimuline, the more the assemblage created between bodies and interconnected computers gives way to a temporality that is felt affectively. The past, present, and future are experienced simultaneously through intensive qualities of the sonic. Here, Ikoniadou parallels the conceptual nature of Stimuline and narrative instances in Chris Marker’s time travel film La Jetée (1962) as a way to explore how the work allows for the perceiver to experience time in non-chronological modes.

Overall, Ikoniadou provides a rich Deleuzian reading of digital sound aesthetics through her interpretation of these contemporary occurrences in digital sound art and the affective relationships they forge between human perceivers and technology. However, the place where the book falls short (and it literally does, as it is just less than 120 pages) is in her attempt to solidify a media philosophy of rhythmic theory through multiple materialist approaches. She does a substantial job of drawing upon scholarship in affect theory, media theory, and cultural and technoscientific studies. Yet, the book ultimately fails to deliver on its intention: to create, as she hopes, a “rhizomatic connection with materialist media ontologies”.[8] In her introduction, she indicates that her “book is the result of connectivities between these various influences, bringing them [media ontologies] together both directly and indirectly, to suggest that we do not yet know what media can do.”[9] Although she provides a synthesis of these “undisclosed” materialist approaches to media, I can’t help but think that her argument could be strengthened by better contextualizing the work of Virilio, Flusser, and Kittler and elaborating on how those works provide a precedent for her own materialist treatment of digital sound art. Ikoniadou hints at a Kittlerian interpretation of digital sound art, especially in her discussion of Marie Sester’s ACCESS in which such audio spotlights can “think” beyond human consciousness and influence our perception through a machinic logic, yet she never quite synthesizes this type of materialist, technologically determined reading fully with affect theory. As Friedrich Kittler stated in his seminal Gramophone, Film, Typewriter:

While (according to Derrida) it is characteristic of so-called man and his consciousness to hear himself speak and see himself write, media dissolve such feedback loops. They await inventors like Edison whom chance has equipped with a similar dissolution. Handicaps isolate and thematize sensory data streams. The phonograph does not hear the way ears do that have been trained to immediately filter voices, words and sounds out of noise; it registers acoustic events as such. Articulateness becomes a second-order exception in a spectrum of noise. [10]

I wonder how we might think differently about technologies of the hypersonic, in light of Kittler’s suggestion that sound media is autonomous. For instance, the type of directional sound technology used in Sester’s ACCESS is similar to that used in clinical ultrasound technologies. I am interested in the extent to which a Kitterlian reading of ultrasonic vibrations that “think” in frequencies beyond human capabilities of normal hearing might be articulated through new media art and its capacity to influence a more integrated understanding of the world, and I had hoped that Ikoniadou might elaborate on the connections between materialist ontologies to form a firmer framework for rhythm theory. However much this lack of elaboration might detract from the effectiveness of her analysis, Ikoniadou’s The Rhythmic Event still stands as a thorough, highly useful, and perceptive scholarly contribution to ways of thinking about affect and digital technology through the felt microperceptions of sound.