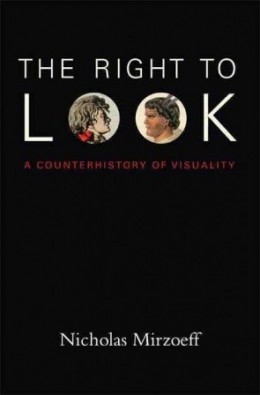 Passionate and vigorous, Nicholas Mirzoeff’s The Right to Look proposes a novel critique of modernity. Linking the plantation to imperialism to today’s military-industrial complex, the author examines the role of “visuality” in modern history. As opposed to a perceptual definition, Mirzoeff’s use of the term relates to how authority self-authorizes by envisioning itself within a particular historical perspective. Authority’s visuality is a worldview––what Mirzoeff calls a “complex of visuality”––that seeks to naturalize and aestheticize its perspective in the classification and organization of the social order. The Right to Look describes the inherent instability of dominant visuality through a historical exploration of countervisualities. These alternatives position Mirzoeff’s “right to look” as a “right to the real.” This is to say, countervisualities confront authority’s narrow construction of reality by imagining and then asserting its alternative.

The Right to Look is an exceptionally interdisciplinary text of impressive geographic and temporal breadth. There is no shortage of reference to Mirzoeff’s influences (Mitchell, DuBois, Lacan, Benjamin, Foucault, Derrida, Spivak, Rancière, Fanon, Mbembe, to name but a few), references which situate dense history within broad theoretical applications. As such, the text contributes to diverse fields engaged in the politics and aesthetics of subaltern and people’s histories. Though he confines his discussion to a genealogy of the Anglo-French imperial project, Mirzoeff’s reliance on a cohesive timeline does not reveal a commitment to reductive teleologies, but rather demonstrates the cross-temporal and cross-cultural repetitions and reversions that destabilize modernity’s dominant narrative of progress.

Three hegemonic complexes of visuality frame the text: the plantation complex, the imperial complex, and the military-industrial complex. The book’s seven chapters use case studies of countervisualities to explain the transformation from one complex to the next.1 The plantation complex (1660-1860) established the precedent for racial classification and spatial segregation reified in society, law, and natural history. By manifesting itself physically and psychically––that is, visibly and invisibly––slavery established an ideological paradigm that subsequent visualities would inherit. In his exploration of countervisualities, Mirzoeff discusses the relationships between the “revolutionary realism” of the Haitian and French Revolutions, including the rise of the local subaltern hero, like Toussaint L’Ouverture in Haiti. Similarly, Mirzoeff connects these revolutions to the abolition movement in the USA, where “abolition realism” visualized the undesired vernacular subject––as in the use of photographs of abolition leaders to assert black subjectivity. Demonstrating the broad impact of this countervisuality, the author continues his analysis in Europe, describing the brief significance of abolition realism to French Realism. The brevity of this influence attests, in part, to the temporary lifespan of countervisualites, which must transform with the changes they inspire.

In the imperial complex (1860-1945), a centralized authority reframed the plantation’s racial hierarchies in terms of cultural difference, adapting the scientific taxonomy to include the more mutable binary of primitive/civilized. A faith in European cultural superiority helped to regulate the increasingly complex geographic scope of colonial power. As an example of “indigenous countervisuality,” Mirzoeff describes how the Maori of New Zealand appropriated missionary texts to prevent cultural annihilation. His related discussion of the Treaty of Waitangi demonstrates the historically endemic struggle for reciprocal exchange between indigenous peoples and western authority. Mirzoeff concludes this chapter by analyzing the origins of the General Strike, describing how labor coordinated and visualized popular opposition to fascism––imperialism’s final outcome and the military-industrial complex’s problematic precedent.

Illustrating the wavering transition from imperial to military-industrial visuality, Mirzoeff analyzes the “decolonial neorealisms” of cinema made during and in response to the Algerian Revolution (1954-1962), as well as contemporary video art from an unsteady post-colonial Algeria. The author concludes his narrative arc in the contemporary moment, describing the omnipresence of the military-industrial complex (1945-present). This complex of visuality totalizes authority’s control via the militarization and colonization of everyday life and self-authorizes by maintaining a perpetual risk of insurgent violence. Though his visual references–– the video of Saddam Hussein’s execution and a wincingly reductive PowerPoint image of head-hunting Iraqi insurgents from a 2006 military campaign––are no more violent than those previously cited, Mirzoeff’s analysis in this chapter is darker and less hopeful than those preceding. The absence of a viable countervisuality is conspicuous and telling. Earlier chapters discuss the past from a critical distance, culling patterns and results of political agitation. These reflections on the right to look rightly require the perspective of Benjamin’s angel of history caught in its wings. In contrast, the final chapter’s contemporary discussion is written from on the ground and in the moment. Mirzoeff seems most vulnerable in these concluding passages; his plea for the right to the real at its most insistent, urging us that unless we act against it, we will remain trapped in this complex of visuality.

Published in November 2011, The Right to Look appeared in the midst of Occupy. Mirzoeff’s passionate dedication to the movement unites theory to practice, and demonstrates his book’s dual scholastic and political project. The author’s Occupy 2012 blog, which accounts for Occupy as a potential countervisuality, acts as an unanticipated coda––a dynamic companion text that applies and expands upon the book’s final chapter.

The Right to Look is decidedly and intentionally incomplete. In its preface, Mirzoeff petitions his colleagues to adopt or improve his methodology and framework to expand upon his introductory counterhistory of visuality. Visual culture scholars should take this under consideration. At a time when the field enjoys disciplinary success, but continues to weather critiques for relying on “over-cooked generalizations and…fascinating but disassociated particularities”, The Right to Look demonstrates how visual culture scholarship can enrich critical and historical understanding of very tangible realities.2 Mirzoeff’s text successfully argues the magnitude of this project. It is a breathless and staggeringly detailed book, which overwhelms so as to inspire in all of us the right to look. The plea is imminent; the duty appointed.