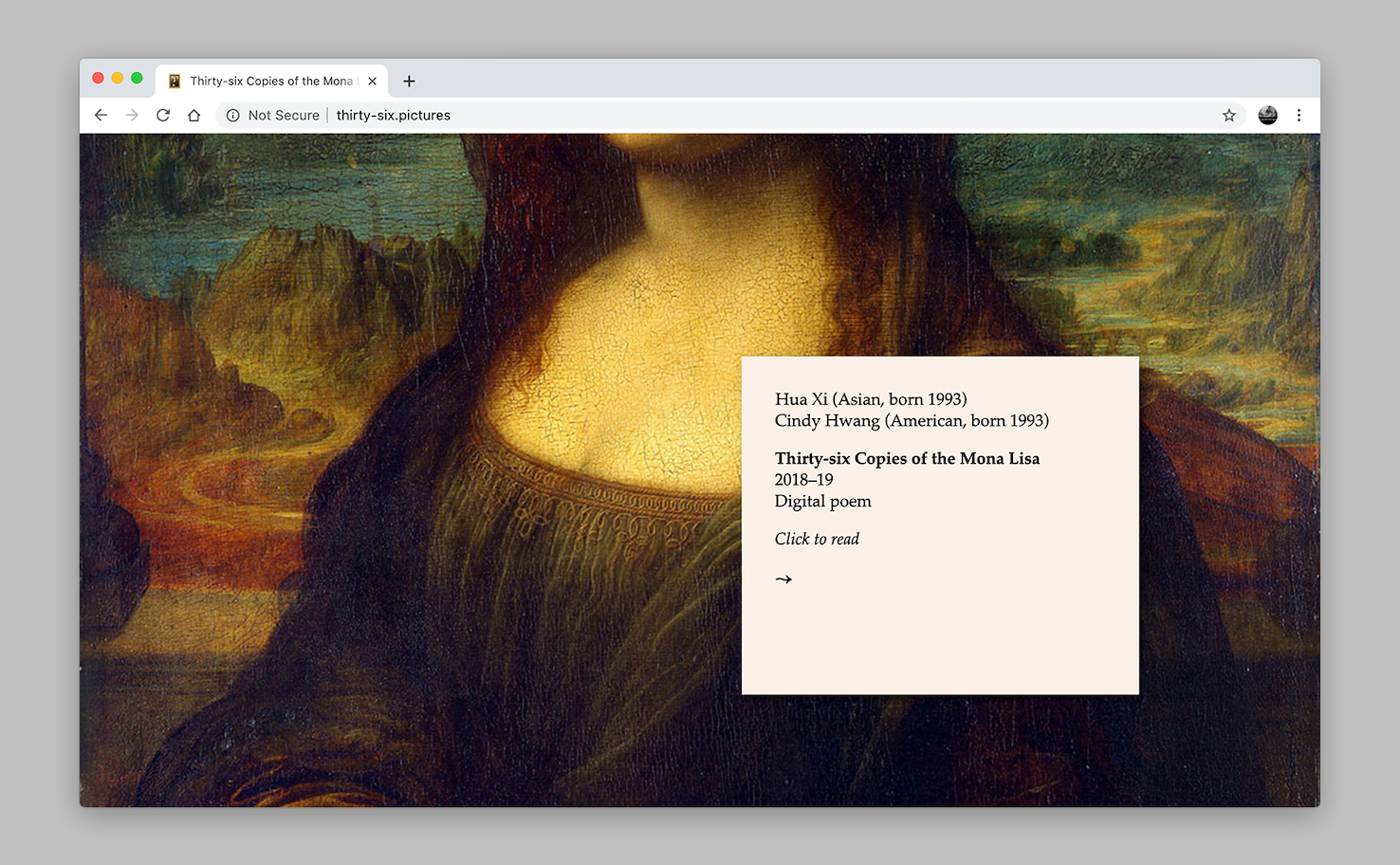 by Cindy Hwang and Hua Xi

Thirty-six Copies of the Mona Lisa is a digital poem about oil painting reproductions, Chinese national identity, and Western colonialism. When my friend Hua Xi approached me in December 2018 with an opportunity to collaborate—turning a poem she had written into a website—the critic and curator Douglas Crimp was far from my mind. But reading his acclaimed “Pictures” essay in a seminar, and then encountering InVisible Culture’s invitation to engage with Crimp’s legacy not long after, prompted me to reconsider Thirty-six Copies through the pictorial conceits articulated in his essay, which came to define the “Pictures Generation” of artists. After all, our work consists in part of sixteen pictures, including one of the most famous in the world, and lived for a time on the website thirty-six.pictures (“.pictures” being a surprisingly affordable domain). What follows is a reflection on how those pictures contribute to one’s reading of the accompanying poem, and vice versa, drawn from Crimp’s original insights.

To be clear, the pictures in Thirty-six Copies are quite unlike Crimp’s pictures, which were primarily filmic, photographic, and contemporary in nature. They are, instead, paintings produced between the fifteenth and early twentieth centuries—or to be more precise, digital reproductions of those paintings that have been compressed into JPGs and reconstituted onscreen, pixel by pixel. But for the purposes of this essay, I will refer to them simply as “pictures.” (In his 1979 follow-up to “Pictures,” Crimp clarifies that “Picture, used colloquially, is also nonspecific: a picture book might be a book of drawings or photographs, and in common speech a painting, drawing, or print is often called, simply, a picture.”1)

In “Pictures,” Crimp observed an ontological shift in representation, in which a picture went beyond simply depicting reality and became “a signifying structure of its own accord.”2 He zeroed in on artistic strategies that liberated the picture from its usual signifying duties—because representation was no longer secondary to reality, but accrued meaning “in relation to other representations”—and the resulting psychic reverberations.3 Thirty-Six Copies exists in this generative gap, wherein its sixteen pictures convey a parallel narrative, and the relationship between picture and text is sometimes indeterminate, loosely associative, or more complex than initial appearances might suggest.

First, a note about the poem’s structure: Thirty-six Copies is organized into sixteen groupings of thirty-six stanzas. Each grouping is paired with a different picture, each of which in turn corresponds to a “page” of the website. Clicking on the arrow below each text loads another page and thus another picture. The poetic text is displayed next to each picture within a small rectangle, like an object label; hovering over a picture with one’s cursor temporarily replaces the text with the picture’s identifying details: its creator, title, year of completion, medium, and current owner.

This oscillation—between the poetic and subjective, and the literal and objective—calls to mind Crimp’s observation that the caption, rather than “[stating] the signification of the picture,” can provide it “with a meaning that it did not otherwise have.”4 The object label anchors the pictures in the institutionalized, colonial space of the museum, while the poetic text raises questions about their (re)production, subject matter, and circulation. But while Crimp focused on pictures that were banal and opaque to signification, Thirty-six Copies features pictures that, in some cases, “clearly represent things that we recognize”—the Mona Lisa, The Birth of Venus—“and with which we have many psychological associations,” adding yet another layer of meaning to the mix.5

Several of these pictures are directly referenced in the poem, but more often than not, there is no immediate correlation between picture and text. Hua and I selected the remaining pictures on the basis of art-historical memories and associations triggered by the text. For instance, “untimely death of the Summer Palace” conjured Looty, the Pekingese dog who was seized from the Chinese imperial residence and presented to Queen Victoria, who subsequently commissioned the dog’s portrait. Later in the poem, the question “Did he paint her because she looked the way he wanted her to?” recalled one of the most infamous nudes in the Western canon, Manet’s Olympia—in which a reclining prostitute is attended by her Black maid. Instead of rendering the picture more legible, the text further destabilizes its interpretation.

With these interventions in mind, one might place Thirty-six Copies in a lineage of artworks shaped by “processes of quotation, excerptation, framing, and staging” that “necessitate uncovering strata of representation,” about which Crimp wrote so lucidly.6 Reading the poem is akin to peeling back layer after layer of accumulated meaning in order to grasp the full scope of its tragedy, because “underneath each picture there is always another picture.”7