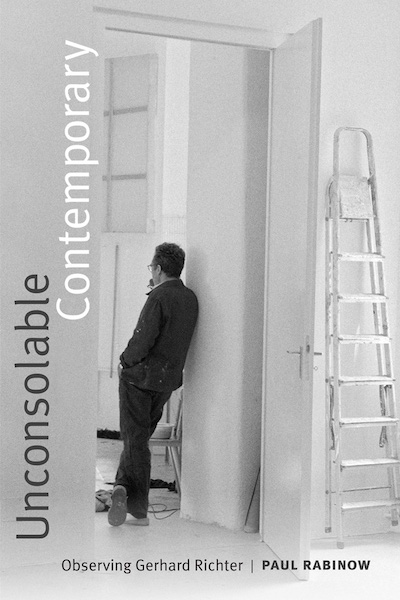 Given the insurmountable number of publications already in circulation, contributing an innovative piece of writing to the existing literature on German artist Gerhard Richter (b. 1931) is no small feat. Richter’s website—which is carefully managed by his personal archivist—provides up-to-date accounts of the over 200 monographs, 186 articles, 178 solo exhibition catalogues and over 1300 group exhibition catalogues published since the beginning of the artist’s career in 1962. Albeit outside art historical, critical, and curatorial disciplines, Paul Rabinow’s Unconsolable Contemporary: Observing Gerhard Richter provides new insight into the work of one of the world’s most extensively exhibited and written-about artists.

A Professor in the Department of Anthropology at UC Berkeley, Rabinow is most well-known for developing an “anthropology of the contemporary.” As outlined in the introduction of his seminal book Marking Time: On the Anthropology of the Contemporary (2007), Rabinow defines “the contemporary” as “a moving ratio of modernity, moving through the recent past and near future in a (nonlinear) space that gauges modernity as an ethos already becoming historical.”1 Rabinow maps this definition of the contemporary onto Richter’s practice alongside sociologist Niklas Luhmann’s maxim of “observers observing observers.” Conceiving his exploration as an anthropological test, Rabinow attempts to disrupt the positionality of prior critics, curators, and art historians who have taken up Richter’s works “with the aim thereby to invent a practice of anthropological assemblage work” (119). Through an anthropological angle of second-order observation, Unconsolable Contemporary is an effort to establish an interpretative adjacency to the work of Gerhard Richter as a practitioner of an ethos of the contemporary (106).

The first chapter of the book provides an overview of the numerous theorizations surrounding notions of “the contemporary” in art historical theory and criticism. Rabinow studies the responses of a 2009 questionnaire issued by the journal October to help him better understand the critical landscape.2 The aim of the questionnaire, which was sent to critics and curators, is to capture what constitutes art as ‘contemporary’ and what it means as a distinct concept for artistic institutions. But Rabinow notes that the range of responses are “conspicuously staid” (17). That is few, if any, of the respondents contest October’s tentative diagnosis of the state of things in the world of art and art criticism, nor take up the questionnaire’s challenge which asked respondents to move beyond references to the art market and globalization. Rabinow concludes that although there is no consensus as to what defines the contemporary in art, he is in agreement with Johanna Burton of the Whitney’s response, which reads:

What the contemporary offers—when it is allowed to operate as a way of thinking broadly about the conditions for artistic production and reception we are ourselves experiencing—is the opportunity for praxis. Writing, thinking, and teaching about art whose consequences we cannot fully know provides us a kind of meta-exercise, one not dissociated from historical accounts but, rather, alive and awake to connections to be made between now and then while nonetheless aware of the utter incompatibilities (23).

Chapters two and three introduce readers to the numerous collaborations and relationships Richter fostered with other artists, most importantly Blinky Palermo (1943-77) and Sigmar Polke (1941-2010). Rabinow does not shy away from pointing out the roles played by several of Richter’s interlocutors—particularly critic and curator Robert Storr as well as critic, curator, and professor, Dr. Benjamin Buchloh. Rabinow stresses the critics are crucial to Richter’s practice and should be considered as an important element to his contemporary ethos. In particular, the author examines interviews and interactions between Richter, Buchloh, and Storr in order to better understand how the critics determine or place certain works as responding to historical events or, in Rabinow’s words, particular kairos. For example, in displaying the painted series October 18, 1977 (1989) at MOMA in 1995 instead of a German museum, Rabinow argues that Richter was attempting to set something in motion: “his objective was to abet and facilitate objects, seeable and enunciable” (72). The series, which consists of a group of 15 paintings depicting an episode in 1977 wherein the Baader-Meinhof Group, a terrorist organization also known as the Red Army Faction, collectively committed suicide in Stammheim Prison where they were held. Using photographs published by newspapers as source materials, Richter painted several renditions of the photographs in his signature black and white style of blurred photographic-like paintings. According to Buchloh, historical representation in painting is no longer a viable option given that photography, with its “transparency” and “objectivity” in representation, functions as the ideal instrument for historical representation.3 Contrary to Buchloh’s insistence that history painting as a genre is no longer possible, Rabinow sees Richter’s series as an attempt “to paint historically without the comfort of a philosophy of history or an understanding of representation in art either as giving direct access to the world or being thoroughly incapable of doing so” (75). Rabinow argues that the past does not disappear in the works, but rather a form of metalepsis is introduced. Metalepsis can be understood as taking up an aspect of the past and making it function within a different narratological milieu; that is, subordinating the past event to a different function and thus transforming it and making it present (74).

In the final three chapters of the book, Rabinow takes a new trajectory by turning his attention to specific works in Richter’s oeuvre in order to highlight how they illustrate a contemporary ethos. For example, Rabinow argues that Richter’s color chart works are exemplary of Nachleben.4 Rabinow uses the term referring to objects, actions, and motions that are excluded from modernist forms but nevertheless exist in the present (148). In Richter’s color chart works from the 1960’s, the artist randomly selected thousands of individually-colored paint chip samples from a hardware store. Rabinow argues that in these works, Richter takes color as a series, which, understood in their industrialized nature (as paint chips arranged by color spectrum gradations), can be arranged and rearranged by anyone (100). Incorporating semiotician Roland Barthes’ definition of le Neutre (the neutral) as purposefully violating expectations of linear progression, the drive for the le Neutre could be said to characterize Richter’s practice. Wherein Barthes uses language to derail language, Richter’s projects, like those of Barthes, are “self-consciously self-annihilating” (127). To illustrate, in works such as October 18, 1977, Richter subjects painting to a process of interrogation: the paintings appear to acknowledge the displacement of painting by photography, yet they paradoxically also affirm the continuing possibilities of painting by remaining paintings.

One might ask: What is significant about Rabinow’s book for art historians, critics, and curators alike? Rabinow not only provides a careful examination of the popular discourses around Richter’s work, but also demonstrates how Richter himself complexly and recalcitrantly responds to critics. Although not every chapter in the book culminates into a conclusive argument, they function as subtexts to challenge readers to question the mythos propagated around the artist, thus deserving of readership beyond those interested in the discipline of anthropology.