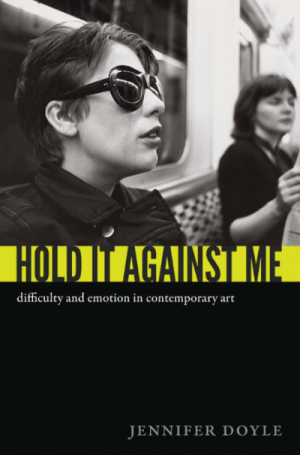 How can we respond to artworks that make us downright uncomfortable? What kind of thinking allows viewers to make sense of art that comes in the form of emotionally challenging physical encounters? How might one engage with an artist who only wants to hold you, as Adrian Howells does in Held (2006), a performance piece where he spoons the audience one by one?

Posing these questions in her recent book, Hold It Against Me: Difficulty and Emotion in Contemporary Art, cultural scholar Jennifer Doyle searches for the politics embedded in artworks that relay their message through emotion not as a means of “narcissistic escape, but of social engagement” (xi). For Doyle, emotional and difficult works do not operate under modernist pretenses or require specific expertises in order to unlock their meaning. On the contrary, such works mostly come in accessible and mundane guises. Therein lies their potency.

Despite its accessibility, however, difficult art remains stubbornly impervious to criticism and interpretation. Though viewers may easily—though not necessarily comfortably—connect to a work’s “emotive realness,” it may remain largely “unmappable” within familiar critical terms (xii). Doyle’s approach to difficult art thus calls to mind the aesthetic category of the sublime, which similarly escapes the complete grasp of interpretive tools. “Emotion can make our experience of art harder,” Doyle asserts, because emotions are complicated, sometimes contradictory, and may even spin out of control (4). In fact, emotions can be messy—even bloody, as her discussion of Franco B’s 2003 performance, I Miss You, illustrates. Franco B becomes undone before the viewer’s eyes as he drips blood over his canvas. There is no handy instruction guide of what to feel or how to respond to his work. Confronting I Miss You, the viewer is similarly left undone.

Throughout Hold It Against Me, Doyle makes a valuable distinction between difficult art and controversial art. The primary difference, she asserts, is that controversial artworks—by artists like Jeff Koons, Vanessa Beecroft and Santiago Sierra—can be turned into consumable and containable products by both the art market and critics, whereas difficult art lies beyond the scope of hype. As Doyle wryly notes, some controversial art even becomes popular with museum curators, because it can be marketed to and accessed by general audiences. Somehow it is easier to stomach controversial art than difficult art that asks to “keep company with vulnerability, intimacy, and desire” (20).

In the same vein, Doyle strikes at the modern tradition of art criticism for its apparent inability to deal with emotion in art. She launches her attack against the bastions of the modern art tradition, namely the museum and the gallery. For her, “few places will make people more self-conscious of their reactions than a museum or an art gallery.” These are spaces “in which we encounter culture, usually on someone else’s terms,” where “appearing to be cool and aloof is the mark of sophistication,” and where art is staged as “Art” and its emotional content is sanitized accordingly (5).

Doyle may be right in suggesting that the museum is not the most suitable venue for a good cry, and probably even more so for art critics. However, I would contend that it is neither unthinkable nor impossible for viewers and critics to engage emotionally with art in public. In her attempt to dislodge the “cool, distanced, and anti-emotional” (8) aspects of modernist criticism from the ordinary experience of art, Doyle may have underestimated many viewers’ experiences of being touched, amazed, thrilled, and saddened within institutional spaces.

Despite this oversight, Doyle succeeds in demonstrating how certain types of art with particular affective content remains marginalized or is neutralized by the “official” art system, and making the reader acutely aware of the limits of modern art criticism to meaningfully engage with works of overwhelming and even suffocating affective density. Most notably, responses to Ron Athey’s performance piece Incorruptible Flesh: Dissociative Sparkle (1994) and Carrie Mae Weems’s photographic essay, From Here I Saw What Happened and I Cried (1995 – 96) were marked by the inability of critics from both the left and the right to make sense of the tenderness and self-reflexivity of the works. As with a great deal of feminist and queer art, critics approached these works as literalisms, failing to see beyond the factual body on display. In such readings, Athey and Weems are treated as mere proxies of their prescribed minority groupings: queer men and Black women, respectively. Even as these works confront us viscerally, “it is easier to shrug off the challenge of such work” than to accept the challenge and “to map the braiding of feeling and politics” in order to come to another, perhaps even richer understanding of the work (112).

Doyle concludes with David Wojnarowicz’s Untitled (Hujar Dead) (1988 – 89), a nine-panel collage of black and white photographs of AIDS victim Peter Hujar’s face before and after death, as proof of this challenge. There is no easy or simple entry point into the death of an invisible minority. Art criticism does not teach us how to respond to images like these, and no formula comes to our aid. Confronting Hujar’s face, we stare down difficulty—the difficulty of his life and our own, as we also become history.

The title of the book can be interpreted in two ways. It could refer to an embrace or the holding of one body against another. But “holding it against me” can also suggest bearing a grudge—to be resentful, to be aggrieved. For Doyle, it is only by thinking through the complexity of both embrace and distress that engaging with emotion and difficulty in art becomes possible.