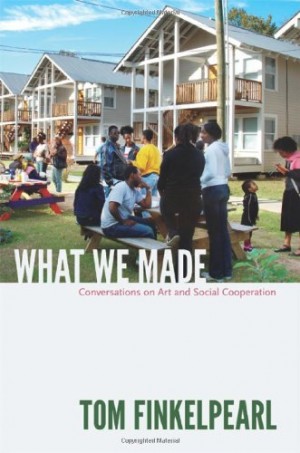 “Placing quotation marks around the everyday to both appreciate and critique it” is how critic Jon Davis describes the practice of interdisciplinary artist, Harrell Fletcher. Introduced halfway through What We Made: Conversations on Art and Social Cooperation, Davis’ quote serves as an anchor not only to Fletcher’s practice, but also to Tom Finkelpearl’s ambitious volume, and, more broadly, to the interdisciplinary field known as social practice art (152). The author’s commitment to social art practice is born out in his recent appointment as Cultural Affairs Commissioner for New York City after serving as the Executive Director of the Queens Museum, where he championed the everyday lives of local residents through community-focused outreach. Composed of 15 conversations conducted over the last 10 years with artists, curators, participants, art historians, and urban planners, the architecture of the book echoes the logic of the subject matter—it “quotes” the “quotes.” Like the schools, marketplaces and parades it describes, Finkelpearl’s book becomes a town square of sorts—a dialogical forum where many participants—artists, curators, photographers and interviewers and others—can share their views. Reflecting this inclusivity, the various terms used to define social practice art warrants considerable attention from the author. Variously described as participatory, collective, or collaborative art, Finkelpearl wisely settles on “social cooperation,” a term broad and vague enough to weather various applications and contexts.

No site could claim to be more ‘everyday’ than Jay’s Quick Gas, a family-owned gas station and repair shop in Oregon and no participant possessing greater enthusiasm than its owner Jay Dykeman – the subject of a chapter entitled, “Participation, Planning, and a Cooperative Film.” In an exclamation mark laden interview, Dykeman tells Finkelpearl about his long held dream to film a version of James Joyce’s 1922 novel Ulysses at his garage. Instead of consigning this twilight vision to the dreary detritus of his morning hours, Dykeman realized his epiphany with the support of Harrell Fletcher. In their film Blot Out the Sun (2002), Jay, mechanics and customers serve as narrators of Joyce’s tale of death, social inequality and love, reciting poignant passages to the camera from cue-cards. Leopold Bloom’s Dublin gives way to the grease pits of North West America in a testament to Joseph Beuys’ 1974 assertion that “every human being is an artist.”1 Describing his experience Dykeman says,

“I am a very average person. For average people who don’t really get out of themselves, what an opportunity. That’s one thing we like about artists: they have that ability to get out of themselves. Most of us can’t do that. I run a gas station. So for a few minutes we were getting out of ourselves, and that was really thrilling” (178).

The possibility of “getting out” of oneself, whether geographically, culturally or spiritually, is at the core of Finkelpearl’s volume. Indeed, while Fletcher’s piece was originally screened in the gas station forecourt, the film has since been exhibited as part of the Olympia Film Festival, the PDX Film Festival, the Aurora Picture Show and the 2004 Whitney Biennial.2 Yet, for all its discussion of ‘boundary crossing’, the book neglects to interrogate the potential contradictions attached to the institutionalization of social practice art, both for the artist and the organization. While community arts projects of the Sixties and Seventies drew inspiration from the spirit of the counterculture­­ movement––firmly situating their practice in a counter-institutional framework. Today’s artists and institutions, however, find themselves increasingly interwoven, leaving the reader to ask: What happens when social practice art becomes spectacular? Instead, through mention of parades, rallies, and demonstrations (56-57), What We Made advocates a certain ‘kind’ of public socio-spatial mobility, one that sidesteps the more problematic critiques directed towards the professionalization of grassroots outreach efforts. The dance between the local and the global and the legitimization of creative practice across networks extends to Tania Bruguera’s 7-year project Catedra Arte de Conducta (Behavior Art School, 2002-2009), the subject of a chapter entitled, “Education Art.” An experiment in pedagogy, Bruguera’s alternative art school aimed to foster a “new generation of less commercialized, more politicized artists in Cuba” (179). Moreover, through interactive workshops, Bruguera also hoped to open the minds of students’ to a kind of “alter-reality, transreality, parallel reality” (201). Other works described in What We Made such as Lee Mingwei’s Seer Project (2003) aim to generate similarly organic spaces of enlightenment. Mingwei orchestrated one-to-one sessions between “seers” (tarot card readers and psychics) and “seekers” (those seeking expanded mental consciousness) in a specially constructed room on the Harvard University campus. So ephemeral is this art that it almost doesn’t exist as “art” at all: “I see my work…as something that’s very bland: sleeping, eating, walking, and bowing…Maybe I would be more comfortable with being called a bland artist” (312). This quote underscores the spiritualist roots of Mingwei’s oeuvre, while problematizing its existence as “art.”

Since aesthetic concerns matter little to social practice artists, a question hangs over a number of projects discussed: is this not social work, therapy, urban planning, or plain old activism? According to art historian Claire Bishop, who grilled Bruguera on this very topic at a conference in 2008, the artist does not even know herself (205). Finkelpearl chooses not to dwell extensively on the debate over where the ‘project’ stops and the ‘art’ begins. Instead, by emphasizing works that stress the process of production and the value of inter-personal relationships, empathy and patience­­, Finkelpearl highlights what he believes to be the key points deserving of our attention––as the title of the book makes clear, the We in What We Made.

Despite these worthy intentions, the ethics of social practice remain central to Finkelpearl’s critique. Projects that seek to “activate” participants through education or spiritual enlightenment beg the question: Were participants uneducated or unenlightened before? (31). Much has been written on the ethical implications of artists who enter into communities of which they are not part.3

Finkelpearl cleverly problematizes this ongoing dispute by curating an axis of responsibility built on those artists who engage ‘horizontally’ with local communities (like Bruguera) and those who work ‘top down’, utilizing institutional partners to complete projects. In the chapter “Social Vision and a Cooperative Community” Finkelpearl highlights Rick Lowe’s Project Row Houses (1993), an ambitious endeavor that positions itself at a 45 degree angle between these coalitions. With the help of local residents and a development corporation, over the last 20 years Lowe transformed 24 derelict shotgun houses in Houston, Texas into a cultural arts hub. As a recent recipient of a MacArthur Foundation Genius grant, Lowe speaks to the increasing recognition of social practice art in the fickle world of contemporary art while illustrating the delicate balance involved in its creation. On one hand, Lowe’s prize confers mainstream respect to the form, while on the other, social practice art remains shackled to critiques of tokenism and concerns over the ethical repercussions of using people as material (what architect Teddy Cruz calls “cultural pimp(ing)” (268).

Mirroring the projects it discusses, What We Made facilitates and connects ideas rather than offering a particular judgment. The lack of a singular authorial voice results in a cacophonous inclusivity of intersecting positions and voices that even Finkelpearl admits in the preface can be both “fruitful and confusing.” Much like hearing about a great party you weren’t invited to after the fact, the volume runs the risk of alienating readers who were not privy to the experiences first hand. Furthermore, without an art ‘object’ to focus on or visual descriptions to revel in, the concentration on personal reflection and testimony runs the risk of sending the reader into a spiral of disinterest. Yet, those willing to situate themselves as imagined critical participants in Finkelpearl’s case studies––to envisage the creative possibility of “I” giving way to “we”––are rewarded with an expanded appreciation of social practice art. Concluding with a rumination on the theory of progressive pragmatist John Dewey, What We Made makes a powerful bid for readers to “get out” of themselves.